Shri Pranab Mukherjee, President of India inaugurated an international conference themed “Universities of the Future: Knowledge Innovations and Responsibility’ ’at O. P.  Jindal Global University (JGU), on the 18th of March,2017. The 3-day conference hosted by the university was being held from 18-20th of March, 2017.

I had the opportunity to be part of the Media team covering the Inaugural at the University, in the capacity of a blogger. I was bowled over by the world-class facilities and state of the art lecture rooms at the College. The venue of the campus was buzzing with activity with both Faculty members and Students extending warm welcome and hospitality to the guests , including the media members.There was sheer positive enthusiasm inside the campus.

The conference which seeks to examine the future of Indian universities in the 21st century is being organised by the International Institute for Higher Education Research and Capacity Building (IIHEd), O. P. Jindal Global University. It recognises that while individual scholars have reached global excellence, the Indian university, as an institution requires essential reforms to acquire the intellectual status and eminence. 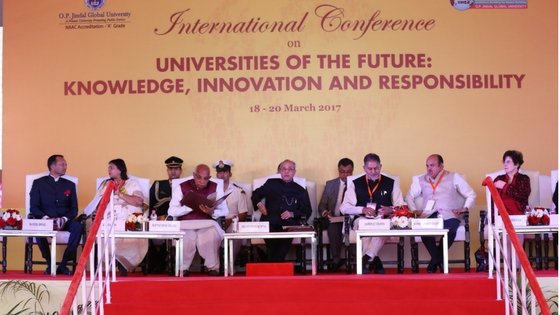 Speaking on occasion, Shri Pranab Mukherjee said, “Knowledge mobilization through quality higher education is pivotal to the socio-economic development of a nation. Innovation and futuristic universities are the driving force behind this. There is an urgent need to improve education system in terms of the quality of instruction, faculty, research and capacity building.” 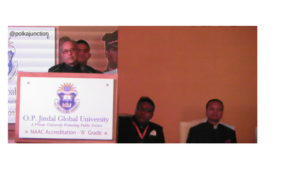 The President lamented that no Indian university figures in the top 200 universities of the world. Transforming universities into centres of excellence is the key challenge policy-maker and academic leaders face. Educational institutions have to gear up to face the socio-economic challenge the country is facing in terms of job creation. The ‘demographic dividend’ in our country has to be tapped with the help of these educational institutions, which will have to be holistic, value-based, skill-intensive and technologically advanced. He stressed that the future of higher education lies in the increased use of IT through innovation and futuristic teaching.

The President said, “Quality, affordability and accessibility are the three cornerstones of higher education which need to be understood in the Indian context. Our universities need to actively pursue linkages with the best universities in the world to ensure student mobility, collaborative research and joint projects.” He also emphasised on the linkages between education and industry and said, “Innovation should be linked to the market.  Through collaborative work and international knowledge exchange, educational institutes can build a larger influence in the international education arena.’’ 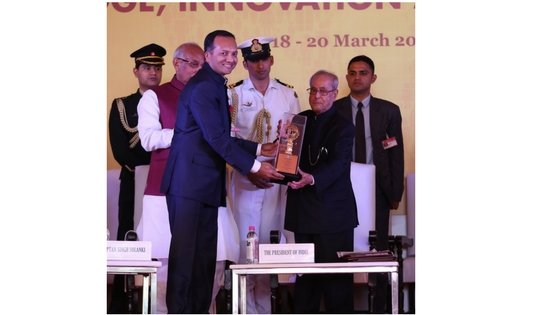 Speaking to an eminent gathering Shree Rambilas Sharma, Education Minister, Haryana said, “Knowledge, innovation and responsibility have been Indian patents since ancient times. Knowledge is not only our past, but is our future.” 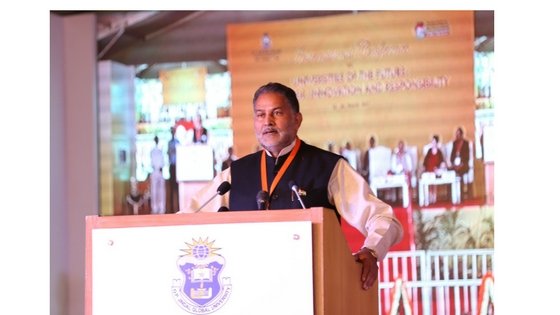 Welcoming the first citizen of India to the JGU campus, Mr. Naveen Jindal, the Founding Chancellor, of the University said, “We are proud and honoured to have the President of the country inaugurate this conference. It is a rare fortune for us at JGU to have him in our midst. He is at our campus for the second time today. His first visit was in March 2013 for the Conference on ‘The Future of Indian Universities,’ a moment vividly remembered as one of the most inspiring in the institution’s history”. 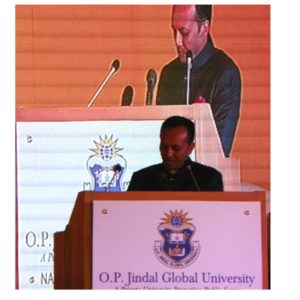 Talking of Universities of the Future, Naveen Jindal said, “In this context, three reform initiatives are imperative. First is to debate the option of a four-year undergraduate programme. Even as our universities churn out thousands of graduates every year, serious questions are often raised about their employability. The four-year undergraduate degree provides an opportunity to gain additional knowledge and skills and goes a long way in improving the quality of education. It gives flexibility through exit points at the end of 3rd year and 4th year, better combination of major and minor courses”.

Secondly, he suggested, “The traditional models of class room based learning are challenged by e-learning and massive open online courses (MOOCs). Social media is changing the way learning takes place. We must fully harness the technological potential for building a university of the future”. His third suggestion was interdisciplinary and professional approaches to higher education. 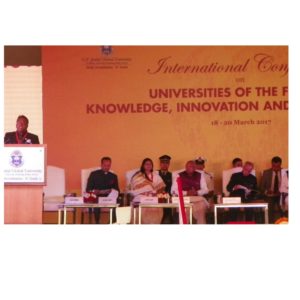 Talking about the pertinent need of the conference, Professor(Dr) C. Raj Kumar, Founding Vice Chancellor, JGU said “The Indian higher education system is facing many challenges, as issues related to quality, quantity, accessibility and equity are simultaneously being addressed.  While there has been an effort to address the challenge of expansion and provide opportunities to access higher education, a lot more needs to be done. O.P. Jindal Global University aims to overcome these challenges in a sustained manner to become a truly world class institution.

The Conference is a culmination of a range of ideas and perspectives that aims to shape India’s aspirations of building world-class universities through comparative and international dimensions. It is a recognition that the future of Indian universities and their ability to seek global excellence will depend on three critical paradigms, first, need for creating a vision for higher education that will focus on research and knowledge creation, institutional excellence and global benchmarking as the indicators for standard-setting; second, the need for pursuing substantial reforms relating to policy, regulation and governance of higher education; and third, is the need for investigating a paradigmatic shift for promoting interdisciplinary in higher education with a stronger and deeper focus on the pedagogy of teaching and learning in different fields of inquiry.

Through a series of perspectives from noted academics and scholars from around the world, the Conference will attempt to discuss these three strings of thought across various sessions, including sessions on research and innovation, regulation and policymaking, financing of universities, internationalisation of higher education and subject specific sessions on science and technology, medicine, law, management, social sciences and humanities, journalism, international affairs and public policy.

The goal is also to create higher education opportunities that will enable the future generations of students to pursue world-class education in world-class universities in India.

Before I end this post , I need to extend my sincerest thanks to Jindal Group for the hospitality extended to bloggers and would like to highlight the impeccable professionalism exhibited by the members of Teamworks Communication Group. Kudos! Also, let me leave you with a glimpse of the ground at Jindal Global University campus where in the President’s choppers landed, that left me awed! 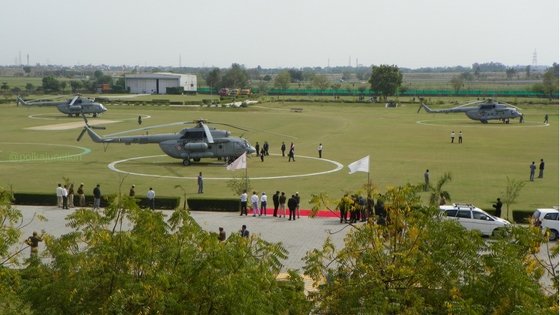 The International Institute for Higher Education Research & Capacity Building (IIHeD), O. P. Jindal Global University(JGU) conducts research and offers advice on all aspects of higher education with a strong focus on research and knowledge creation system; promotion of scholarship and building research capacities; developing international collaborations; benchmarking and assessments of institutions; and for providing institutional support on law; policy and regulations relating to higher education. The vision of IIHEd is to contribute towards institution building for nation building.

The vision of JGU is to promote global courses, global programmes, global curriculum, global research, global collaborations, and global interaction through a global faculty. JGU is situated on an 80-acre state-of-the art residential campus in the National Capital Region of Delhi. JGU has over 220 full time faculty members and more than half of its faculty members are graduates of the top fifty universities of the world as per the latest Times Higher Education Rankings. More than 20% of its faculty members are distinguished scholars from 20 different countries. In fact, JGU is one of the few universities in Asia that maintains a 1:15 faculty-student ratio and appoints faculty members from different parts of the world with outstanding academic qualifications and experience.