‘The Story of a Suicide’ -the title in itself gives the readers a glimpse into what the story might dole out. However, what might catch the readers unaware is the narration and the way the story ends (as it impacted me!). I read this book by Sriram Aiyer online on http://www.storyofasuicide.com

Book Review of The Story of Suicide 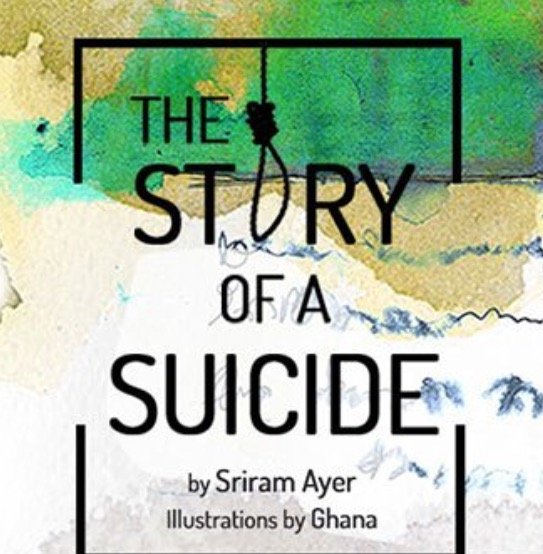 This is a heart-wrenching tale of four college students – Sam, Mani, Charu, and Hari. Each of them come from different backgrounds and sensibilities. And KIT in Chennai becomes the potpourri of taking in all these four.

I am glad the writer has chosen the backdrop of a college for this story. Because it is during these tender years that the young adults may become susceptible and succumb to wrong influences. It is during these years that we as youngsters are confused about our priorities, sexual orientations, view our parents as some sort of dictators and hindrance and ourselves as victims. Also, this is the time to foster life-long friendships built on mutual acceptance overseeing the flaws.

The characterisation has been done in such a way that each one is either a support or a hindrance to the other character or is unpredictable to the core.

Mani is from an impoverished family, where the ‘ mother’ is the sole breadwinner. He is low on self-confidence and his self-esteem is hurt, as he is unable to cope with the English language. When we look around us, we find so many ‘Manis’ who are brilliant students but lose out due to a lack of English knowledge. How fair is it to judge and test a person’s capabilities based on his/her fluency and flair in a particular language that too which is a foreign language in a multi-lingual society like India? I sometimes feel bad for the baseless expectations which the Indian Education System seeks from its students! Mani is shown to be a victim of this same mindless system of education of which ironically, I am a part too – as a lecturer and teacher!

Charu’s character is of a feminist who has her own demons to fight and has various apprehensions to overcome. Blame it on her background, but she comes across as a blatantly honest person with a problem of ‘anger- management’ and insecurity due to the absence of a family to shower her with love and affection. It is during these bouts of anger that she ends up in a soup due to her mindless actions- when her ‘typing fingers’ rule over her mind! You will understand what I mean when you read her Facebook post in the story.

Sam comes across as an intelligent student though he does not use his brilliance in the correct way. The references to him being a ‘TamBram’ brat, the scene of his encounter with a stand-up comedian, and the various Twitter conversations are so well written that they are too real to be a piece of fiction. Over the years, I have seen that the ‘TamBrams’ have become subject of appreciations, conversations as well as ridicule and envy, so much so that they have become resilient and taken it in their stride and have been laughing their way to the US and Twitter, if you know what I mean! If it was some other group, I am sure these Stand-up comedians would have received a back-slash!

Hari is the apple of his family. He has a wonderful family to support him in every way possible, unlike the other three characters. But ironically, it is a member of the same extended family who breaches his trust as a child, exploits his innocence, and takes advantage of his vulnerable age. I just could not stop my tears when the little Hari repeatedly comes to fore during the conversation with Charu over the phone towards the end. What mistake has a child-like Hari committed to being put through so much pain and agony that he grows up with ‘demons dancing in his head’?

I am glad that many social dogmas and stigmas attached with issues of LGBT and feminism, evils like sexual harassment of children and substance abuse, the influence of gadgets and technology and misuse of social-media networking sites, cyberbullying, the spread of depression and suicidal thoughts among youngsters have all been discussed and pondered upon through this story. Also, the illustrations are apt and beautifully done.

However, I do wish it was not all dealt with within one story. The book could have been written in two parts each dealing with a couple of issues. Too many issues make the reading part a daunting task and does not allow a reader to ponder over such issues sincerely and think of ways to handle them in real life. Also, the editing part could have been a little better, as too many typos and grammatical errors are bound to take away one’s attention from the intense storyline. I somehow could not relate to the part where Hari’s dad has nightmares. It was symbolic of the misfortune of losing his son in the near future but nothing more could I infer from it.

I found the character of Alex very inspiring. If only we could have educators like him in abundance, who can understand the students better and provide the correct support and counselling when required, there would be less suicidal cases reported from the campuses. The family again plays a major role in this story, thus driving home the point that ultimately it is the combined effort of teachers and parents that can lessen the misery of adolescents. And of course, the young adults have to behave sensibly and sensitively and persevere during the crucial time of adolescence when the hormones do their aerobics!

Lastly, while reading the digital version of this book, do not overlook the ‘How do I? ‘ section. It has got some useful insights into our everyday encounters and problems. Overall, this book makes a sensible and sensitive read!
———–———
My take on the various issues covered in the story:
1. I am neither advocating nor against LGBT community, however, I strongly feel that people like Hari’s uncle (in the story) should be severely punished for inciting so much of pain at such a tender age that it leaves the child shocked, numb and confused for the rest of his/her life and makes them lead a life of humiliation for no mistake of theirs.
2. Parents ought to play a major role and keep an ‘Hawkeye’ on the change in the behaviour of children. Not always do children open up with their insecurities and problems. Also, be vigilant to suspiciously behaving relatives. Usually, child abuse stems from within a family. Let us listen more to our children than gossips!
3. Let us learn to respect children and not take them for granted. Also, let us teach them that it’s perfectly alright to experience ‘lows’ in our life. Ups and downs are indeed part of life. This will make them not lose their self-esteem when they fail and thus keep them away from suicidal thoughts.
4. I for one, preach my students as well as my child that it’s absolutely fine to be not fluent in English! English is, after all, a library language required to access the world of books- nothing more. Basic English should suffice the requirements of employment. After all, India is a multilingual society and if you are going abroad, then basic English should sail you through. Take pride in your mother tongue.
5. As parents, let us make our children aware of both advantages as well as disadvantages of the Internet. This will make the children be vigilant and there are fewer chances of them succumbing to cyber-bullying.
6. When some students come to me and open up about their sexual orientations towards another student, I do not immediately give a judgment. I inform them that they need to wait for some more time to figure out their sexual orientations as a play of hormones during adolescence may make them have varied feelings at various points of time towards the opposite person. But I am glad that they take me into confidence and reveal these secrets.

2 thoughts on “Book Review : The Story of a Suicide”