‘Dancing with Demons’ by Nidhie Sharma isn’t a mythological thriller, keeping with the latest trend of book releases and if you are guessing the storyline from its title! It’s far from it and the book cover and the blurb helps to understand the plot better. So here is a glimpse of the two….. 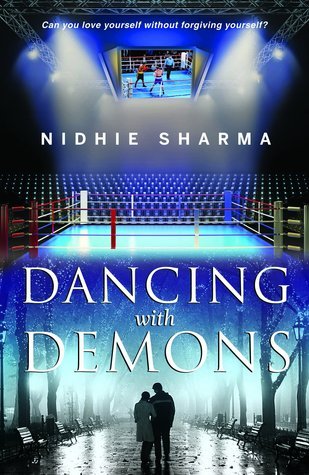 “Karan Pratap Singh is on the brink of winning the Amateur Boxing Championship, when in a moment, he loses it all. His fall from glory seems fuelled by ruthless arrogance and an out-of-control anger management problem. That, however is just symptomatic of a deeper issue. Buried under layers of his fractured subconscious lies a childhood secret he cannot come to terms with.Sonia Kapoor is a beautiful, volatile young woman with a secret that torments her at night but a secret that she feels no guilt for.When fate throws Karan and Sonia together in Mumbai, their personal demons and pasts collide and stir up trouble in their fragile and uncertain present. But, is redemption possible without forgiveness?Dancing with Demons is a fast-paced action drama of love, loss and resurrection “

The book starts with a match between Karan and Sawant, the former being a sober Sportsman who is happy – being far away from the spotlight and the latter is all flamboyant.This match proves to be the end of Karan’s glorious career- thanks to his old demons that come dancing to destroy him , break him and put a dead end to his career.When he is at his lowest point both in his life and career, in- comes Sonia who is equally tired of getting whipped by her past.She shares Karan’s home as a PG and her role in this story starts from the very first day in the house.She literally takes control of the reins to both Karan’s heart and the people surrounding him.

I loved the clarity with which the supporting characters play their respective roles in the story.The characterisation of Jerry is well-balanced while Madan provides the comic relief to the story and keeps us abreast with the murkier side of sports.Somnath,Amar,Ria make an entry and exit at the right moments helping the story to move forward.

Nidhie’s description,terminology and choice of words is appreciable and helps the reader to imagine the action which goes on in the ‘Ring’ as well as around and behind it. A reader is sure to appreciate the struggles , dangers and the fatalities associated with a sport like ‘Boxing’.No competitive sport is devoid of jealousy, insecurity, lust, greed and ofcourse money and fame – so is ‘Boxing’! The trauma which Karan suffers because of his difficult childhood, his constant struggle with anger-management and the way he falls in love with Sonia , shows his vulnerability and renders a human side to the story of ‘Sportsmen’ who are otherwise glorified and revered as ‘Gods’ by their fans.Another aspect I found relevant and fascinating about this story is the power and triumph of mental strength over physical strength!

Apart from Sports and the struggle behind success in it, the writer also ponders over domestic violence, society’s views on working women and the susceptibility of girls and boys to earn quick bucks by falling trap to people like ‘Rane’! The resilience and mental strength with which Sonia leads a new life in Mumbai shows the determination and will-power of modern women in today’s struggle for existence.

The storyline is befitting to be translated on to the silver screen and the book cover too claims that this is soon being made into a motion picture.The story unravels the pasts of the protagonists slowly in layers and at appropriate times, thus making sure the book has the readers in its grip and the other way round as well ! I just hope that the screenplay does not fumble like some words,typos and the glorification of alcohol in the story.

This story is also a tribute to many selfless coaches like Jerry who give it all for the passion of a sport rather than for money or fame.They are the ones who make sure some of these sportsmen remain sane and grounded without getting suck into the now ‘glamorous’ world of Sports (that gets mentioned in the story as well) which is slowly destroying ‘Sportsmanship’ and the ethics of Sports.

Overall, ‘Dancing With Demons’ is an excellent book that makes for a wonderful read this weekend.Do book a copy to unravel the demons!

I received this book from the author through TheBookClub in exchange for my honest review.