Sidhbari in the Indian state of Himachal Pradesh, still remains an unknown destination when it comes to online searches on places to visit in Dharamshala, things to do in and around Dharamshala or for that matter even off-beat places near Dharamshala. Yet, I would suggest you visit this village nearby Dharamshala to truly experience the sheer beauty of this region against the backdrop of the Dhauladhars. All the better, if you consider Sidhbari as your next destination for a spiritual retreat in India.

Sidhbari – an unknown gem near Dharamshala

Cloistered away from the sight of tourist madhouse is a quaint town named Sidhbari, near Dharamshala, overlooking the Dhauladhars. Often ignored by commercial tour agencies who savour on listicles, Sidhbari is thankfully a bit far from famous tourist triangle of McLeodganj- Triund- Dharamshala.

Many decades ago, a Hindu monk too was enchanted by this town (which then, was still a nondescript village) on the banks of rivulet Bindusaras and wanted a place for a retreat where knowledge could meet divinity, service and devotion. Thus was established the Chinmaya Tapovan Ashram of Sandeepany by Swami Chinmayananda.

Visiting this place had always been on cards since my school days!

Our family trip to Sidhbari was indeed pleasant serendipity. We were quite disappointed by the crowded McLedoganj. Yes, the misty mountain paths are beautiful, the climate is inviting, views from McLeodganj is spectacular. However, I found it extremely restless and too chaotic for seekers of serenity.

A majority of the tourists who visit this place on weekends behave in a brazen way, crisscrossing carelessly on their bikes, blocking roads, driving in a state of inebriation and haggling with peddlers all along the way to Bagsu Nag. The less I discuss the atrocious ways of behaviour of these ‘backpackers’, the better. We decided to evade from this mad-house by cutting short our visit to the ‘overtly hyped’ McLeodganj.

Having stayed in a calm and not so touristry Dalhousie and often finding ourselves trekking in the Singing Hills of Dainkund, I found McLeodganj repulsive. Better, let me put it this way, maybe August – September is not the best season for family travellers to visit McLeodganj. During the family trip, the only place where we could seek some peace was inside the monastery!

However, a few years after this unpleasant experience, I had visited Mcleodganj as part of the media team covering the Trigart Kangra Valley festival during the month of October, and that is when McLeodganj revealed its innate beauty to me amidst a serene clime.

Ascending the slopes of McLeodganj and Dharamshala, we took a detour before Yol Cantonment. Yol was the location of a Prisoners-of-War (PoW) camp which had hosted German and Italian soldiers during the two world wars. The cantonment extends from the foothills of  Dhauladhar across the viridescent region of Dharamshala. And the ashram is strategically located between Yol and Sidhbari.

Lush green valley, curvy paths lined with evergreen deodars and oaks, a crisp chill in the air with a backdrop of the majestic snow-capped Dhauladhars for a company, is how one is greeted as we enter this suburb. To keep it short, Sidhbari is a post-card perfect village. And this is what we were in quest of, as a family!

The Chinmaya Tapovan premises in Sidhbari is indeed a sight to behold. Upon entering, I was fleetingly reminded of a famous life-size portrait that inspired me to visit this place.

The portrait was of Chinmayananda with hands crossed at the chest against a backdrop of the Dhauladhars that adorned the wall of our prayer hall, back in school. Through this portrait, he radiated a larger than life presence on the students of our school which was run by Chinmaya Mission.

‘If you rest, you rust’, said Swamiji and had ended his address to us, more than two decades back when he came visiting our school and mesmerized most of us with his impeccable diction and soft-spoken personality.

Be rest assured that I am no follower of any gurus nor am I a member of these ashrams. I am one of the many of my generation who have been smitten by Balakrishna Menon’s oratory skills and his flair with words that were filled with conviction. I am fortunate to have been an audience to various spiritual discourses rendered by Swami Chinmayananda during my childhood days. He made the essence of the Bhagavad Gita, the spiritual text of the Indians, a part of our daily routine.

After all, Mr.Menon was once an advocate and like any good professional, he was awe-inspiring with his words. It was but natural that he had a huge following once he took sanyasa and assumed the name of Swami Chinmayananda.

An ashram with aesthetics

As we entered the aesthetically designed premises in Sidhbari and walked towards the resting place of Chinmayananda or the Mahasamadhi of Gurudev, as it is widely referred to, I could understand why saints from aeons wanted to settle in and around the majestic Dhauladhars.

And, there cannot be another place for a retreat other than Sidhbari. The calm and serene Kangra valley with its interplay of nature’s elements can lure mortals and immortals alike! In the same village of Sidhbari lies what is commonly regarded as the meditation spot of Sage Kapila. Kapila is locally regarded as Sidh Baba due to his mystic powers and so the village shares his name.

A sense of belonging pervaded me as I looked through the huge glass window of Kerala styled Samadhi structure.

The ashtadaathu(made of eight-metal ) statue of Gurudev sits calmly amidst his most loved environs. I am again reminded of the year 1993 when we students chanted the revered Mrutyunjay Mantra, 1008 times, for the speedy recovery of Gurudev as he lay ailing in the U.S on his deathbed.  He passed away on 3 August 1993 and his mortal remains were laid to rest amidst Vedic rituals at this very spot.

As we exit the premises, the 22-feet gigantic statue of Hanumanji graces us and looks imposing. A glimpse of the progeny of the wind God seemed like an apt ending to this spiritual quest of ours as we always ended our morning prayers back in school with chanting of Hanuman Chalisa!

Must visit sightseeing spots in and around Sidhbari

Where to stay in Sidhbari

Hope you enjoyed this off-beat retreat in the lap of Dhauladhars. Leaving you with some more captures of our  Dharamshala-McLeodganj-Sidhbari trip. 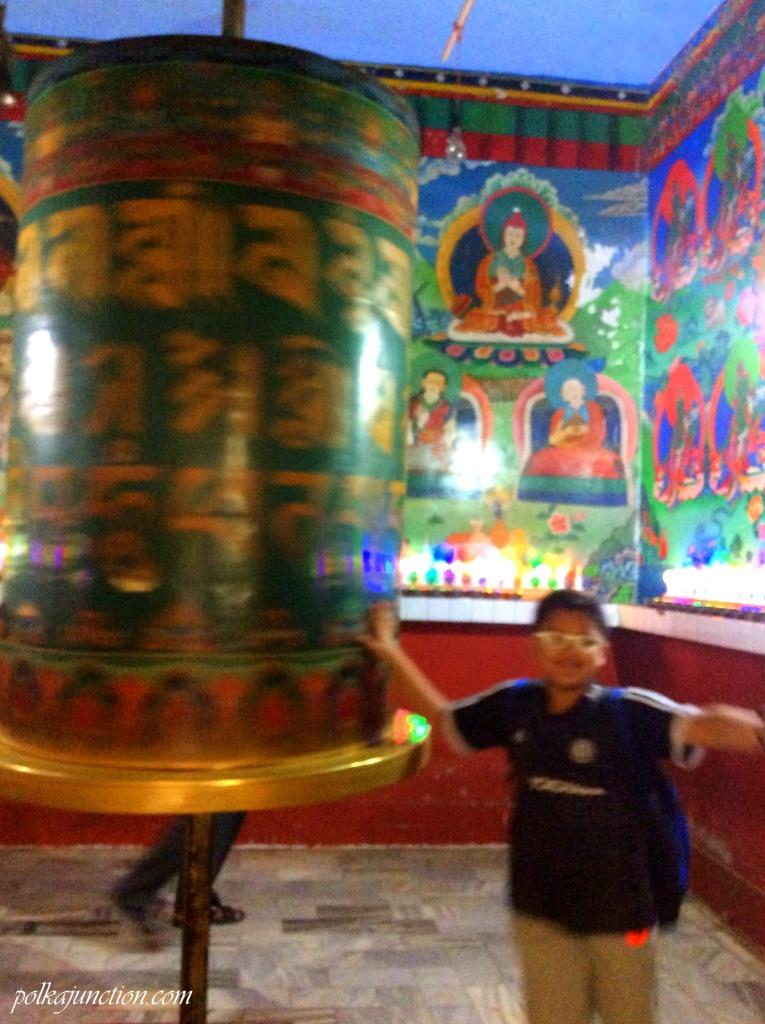 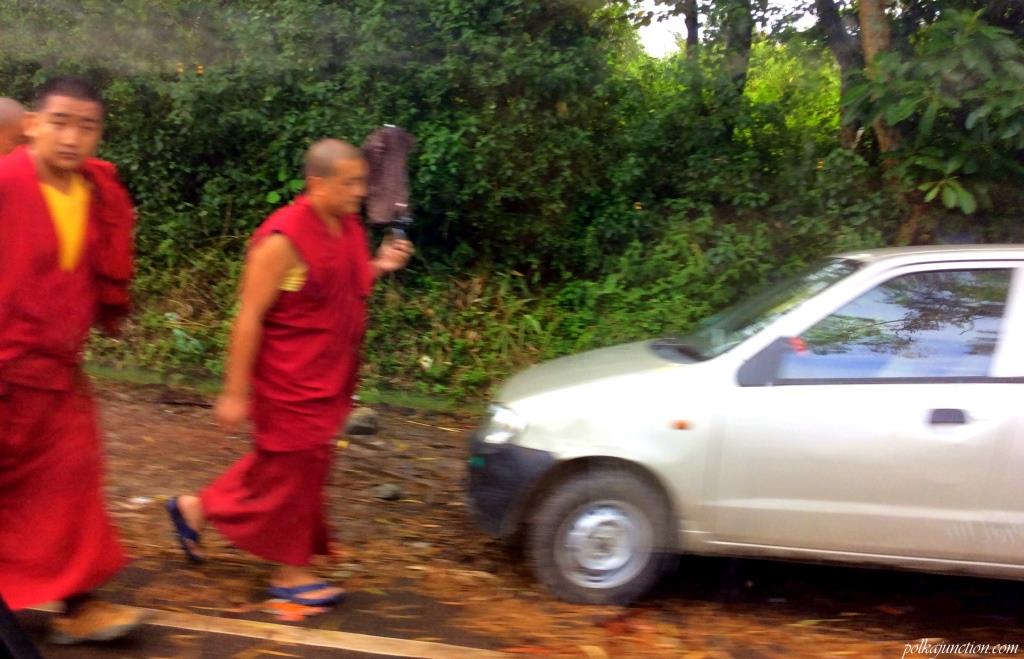