We all love mysteries and whodunnit stories, don’t we? I remember being glued to the idiot box when our desi Sherlock Holmes aka Byomkesh Bakshi used to crack cases and of course fell in love with the literary character of ‘Feluda’ while reading Satyajit Ray’s cases! So, when I saw the title of the book as ‘Vikram Rana Investigates’, I decided to grab a copy as I was excited to read about another Indian detective. This book has been written by Sharmishtha Shenoy- a debutant to the field of writing novels! 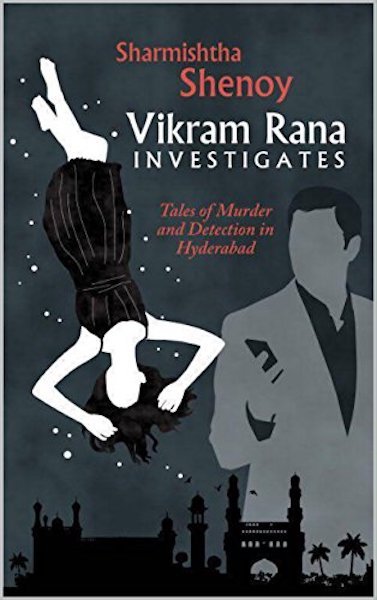 The book cover is dark with grey shades keeping with the stories and the characters in them. It has the silhouettes of important Hyderabadi monuments that echoes the setting for the stories.

The blurb catches the interest of the reader by offering two mystery cases that are waiting to be solved by the detective ‘Vikram Rana’.

Vikram Rana Murder Mysteries set in Hyderabad……
The Mysterious Affair of the Lohia Mansion
When the glamourous socialite Richa Lohia is poisoned in her mansion in Jubilee Hills, her brother-in-law hires his mate, ex-cop Vikram Rana, to solve this murder. This is Vikram’s first case and he, along with Inspector Gopi Reddy, must solve the case even if they face opposition from the richest and powerful family in Hyderabad, who would stop at nothing to defend themselves.
The Sonia Sinha Case
When property developer Krishna Dhavala is stabbed to death in the Necklace Road, everyone suspects Mrs. Dhavala to be the murderer of her alcoholic and abusive husband. But is that really the case? Vikram Rana and Inspector Reddy have a tough time uncovering the murderer and Vikram himself almost dies trying to solve this case. Experience the mystery along with the duo as they fight their way through the maze of lies, deceit, and greed.

Every character barring a few constant characters in the two stories falls prey to the reader’s suspicion! Most of the characterization is well rounded and simple – with no larger than life characters. Also, the language used is simple English.

The first story talks about the pretenses of the rich, the murky world of business and glamour, the pressure and insecurities of socialites and famous people, and how the ‘weaker lot among the rich’ succumb to lust, power, and money. I am sure the readers will empathize with the character of Richa in this story.

The second story again talks about the play of power, money, and desire in a business set-up but this time the focus is on real estate. The setting for the story is Hyderabad and the writer has used the various places aptly with the storyline and the characters! For example, with the sudden interest in owning properties across Hyderabad, the city has seen a boom in real estate developers and also there are rampant reports of misdoings and crimes in the same sector and this is reflected in this story too. The haphazard traffic of Hyderabad too has caught the writer’s attention!

I liked the second story to the first one though both stories in some way do reflect the news bits- one reads and sees in the media. However, I wish the stories were a little more fast-paced with better narration. The repeated references to Rana’s wife as a nagger could have been avoided as it sounded a little overboard. Also, I found the constant summarization of the events boring and dragging which killed the pace of the story.

We know that it is not easy to write a mystery and an investigative novel but Sharmishtha has proved it wrong with this work of hers. The writer needs to be congratulated for having done a wonderful job and taking up a ‘whodunnit’ in her first attempt itself! I am looking forward to better cases investigated by our detective ‘VikramRana’ in the future series 🙂

Do order a copy of this book to have a thrilling weekend. I give this book a rating of 3.5 / 5!

I received this book from the writer through TheBookClub in exchange for my honest and unbiased review.