‘Haunted’, claimed all… ‘We could hear weird voices and noises’, said some, while a handful vouched there was nothing really spooky about the place! These were some of the reactions from friends when they got to know about our trip!!!

I vividly remember the day of our visit to the Most Haunted Fort of India in 2005.I had made sure to dress in anything but black and not let my hair open. Because it was widely believed that black and open hair attract spirits.

My brother and husband wondered why I was acting weirdly, as this was not the first time we were visiting a haunted place nor was I ever scared of darkness nor believed in the paranormal. But then, I had a strange feeling of unease on that day. I wanted no stone left unturned lest we get possessed.

The Haunted fort of Bhangarh

The Bhangargh fort did look intimidating and desolate from afar on that trip. People were marching in and out of it as if they were possessed. Or, was I just imagining things? Well, not sure!

I heard strange noises around the ruins of the Johri Bazaar that was stomach-churning. The rustling of the dried leaves on the ground around the banyan trees at the far end of the Jhouri Bazaar too sounded strange. It was as if somebody was deliberately pushing away the leaves here and there. 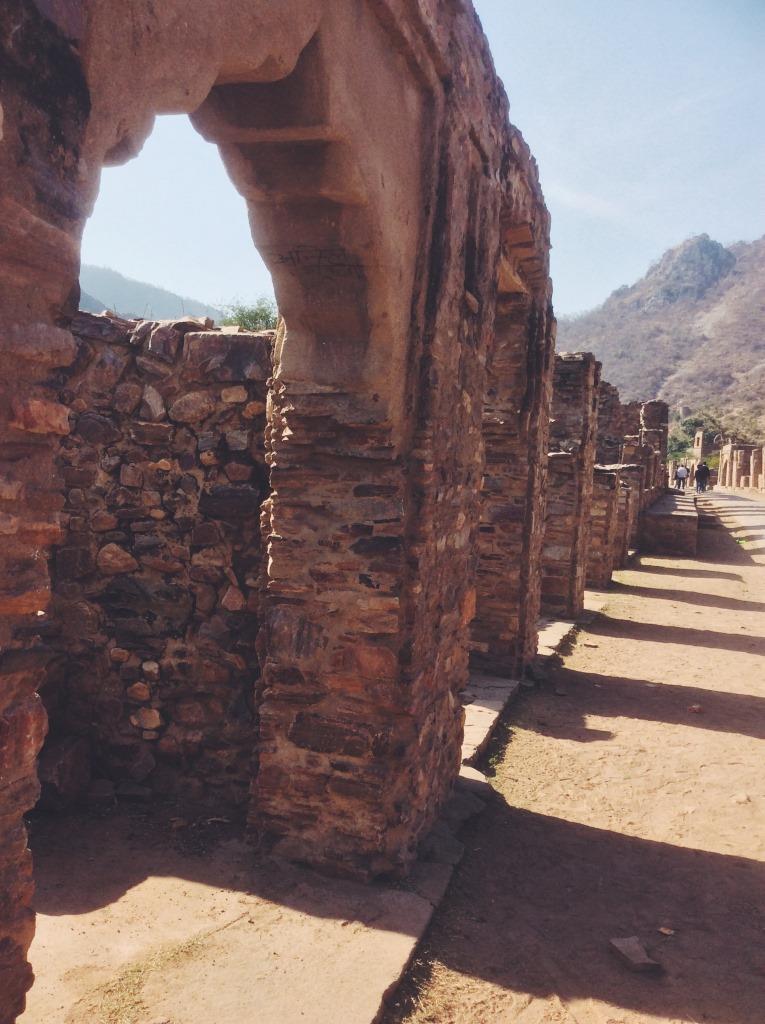 Upon reaching the fourth level inside the fort, the howling of the wind, the emptiness of the expanse in front of the intimidating fort for miles and the play of light through the branches of the ancient banyan trees did send a chill along my spine. The tinkling of the anklets around a water tank near the temple was the last call for me to leave the place.

I decided that enough was enough and persuaded my husband and brother to leave the place. Strangely, neither of them could feel nor hear anything. They were happily clicking away photos of the banyan trees and ruins. But then, I rushed out of the deserted and silent alley of the Bazaar and out of the fort shuddering in fear…while the two were giggling and having a hearty laugh behind me. Amidst the paranoia, I for once completely forgot to click photographs of the ruins. These sounds haunted me!

Now, I feel like a renegade who has betrayed the community of the ghosts, the noise pollutants, and the likes of RGV by not being scared any longer. Ah…I shall tell you why…

The Bose QuietComfort 35 II headphones were launched in India in the month of November and my brother -a geek had bought one immediately. Unofficially, all his gadgets are mine. So, I often use it on my walks and when I am blogging. This new headphone features up to 20 hours of wireless listening per charge and is designed with premium materials like Alcantara microfibre that make them lightweight and comfortable for all-day wear. 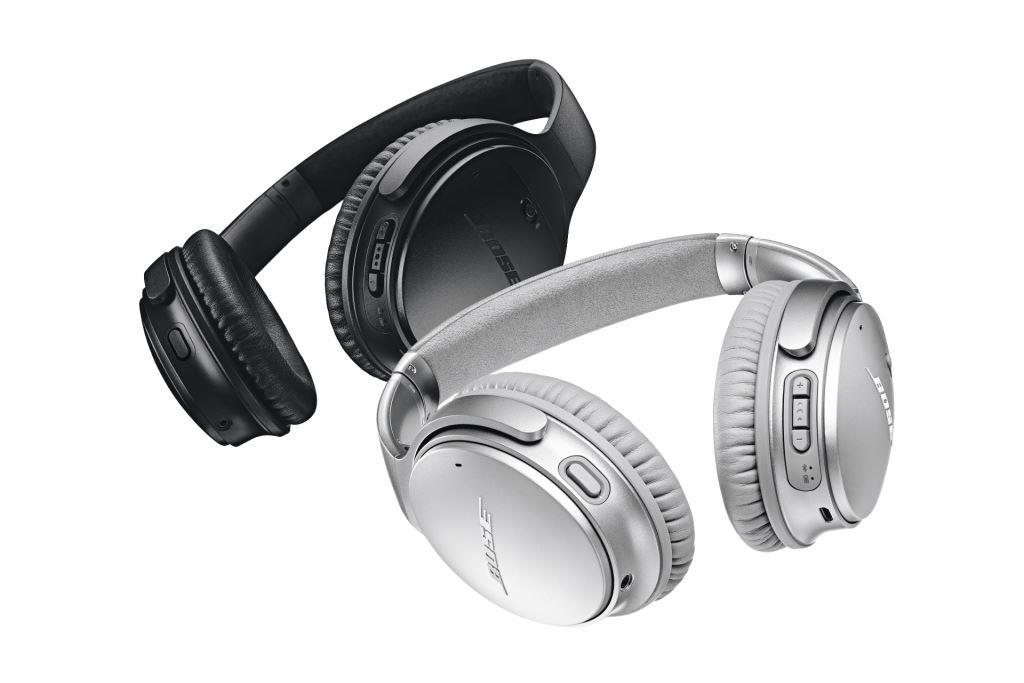 We stay in an Airforce station that harbours the jet planes. So, every take-off and landing is quite an ordeal on the ears and sends a shudder through my body. The new Bose headphones QC35II have a noise-rejecting dual-microphone system that provides clearer calls, even in noisy environments. They are engineered with world-class noise cancellation and are even better than their previous version of BoseQC35. Hence, on a day of flying, one can see me wearing these borrowed headphones, working on my laptop with instrumental music being played on a loop, soothing my ears and nerves!

A Re-visit to Bhangarh

Recently, in the last week of December 2017, I again re-visited Bhangarh with family. I went through the same ordeal with the attire, promises, etc..,. as I did more than a decade back. Funnily, I had the same amount of uneasiness that morning, on the day of the trip. Some beliefs are hard to forego, you see. And I heard similar warnings from friends and co-traveler as I did in 2005.

Except that, this time, it was my son who accompanied us and not my brother. And, a special addition that I insisted on carrying with us was the BoseQC35 II headphone. All through the drive, I kept myself occupied with music.For the first time ever, I was able to hear with clarity and appreciate the fine nuances of Rehman’s music, the rustic beauty of Illayaraja’s songs, and the melancholic hint to the BeeGees’ Words!

Bhangarh Fort and BoseQC35 II – A Clash of the Titans? 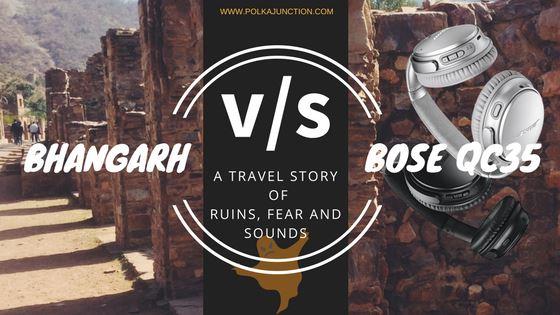 Upon reaching the Bhangarh Fort, just as I set foot out of the car, I made sure to wear the BoseQC35II headphone right from the parking lot. Looking cool, I did not showcase an iota of nervousness in front of my son;)

This time around, the ruffling of the dried leaves looked routine, the architecture of the temples and fort structure looked magnificent. We leisurely strolled around the fort premises and bazaar area. It was more of a picnic to some ancient ruins rather than to a haunted fort with the BoseQC35 II headphones on!

The acoustic noise cancelling superiority of BoseQC35 continuously measures compares and reacts to outside noise. Then cancels it with the opposite signal. Hence, I really was not aware of any unwanted outside noise unlike that of my visit in 2005.

Yes, I was admiring the ancient ruins but thanks to the inbuilt Google assistant, I was in control of my thoughts by indulging in music, sending and receiving texts, and getting answers using just my voice without glancing at my phone.

When my son took away my Android phone to click snaps of the water tank, I did not panic. Alternately, I connected the Bose Headphone to my i-pad. I had to just press the multi-function button, and start talking to Siri instead of the Google Assistant, all the while taking a stroll across the Johri Bazaar. With the BoseQC35 headphone, I was free from wires by connecting easily to my devices with Bluetooth and NFC pairing.

Finally, I also got a chance to capture some splendid architectural structures inside the fort premises. Thanks to the Google assistant who reminded me to take snaps! Oh ya, Unlike the last time, on this visit, I had set a reminder. 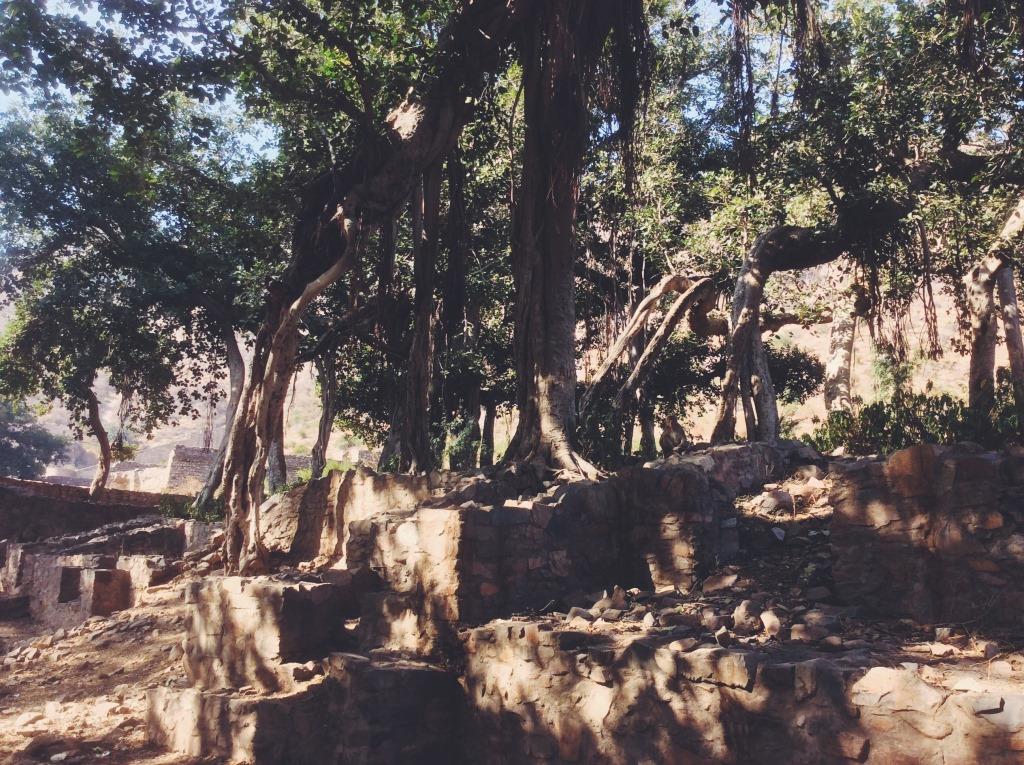 When I look back at my scared self from the past, I end up having a hearty laugh. Not that I believed in ghosts but then it was the movie ‘Bhoot’ from the coffers of RGV that had created quite a stir in 2003. Especially, after Varma said in an interview that ‘If you believe in God then you ought to believe in Ghosts too”. I guess it was Dwarak Warrier’s background score in that movie that had me trembling nervously and scared to death. I have realized over the years that a film creates terror and horror through sounds, background scores, and everyday objects. Try watching it on mute and these horror movies look like Charlie Chaplin comedies!

The setting of Bhangarh, the hype around it exaggerates and extrapolates the normal sounds to such an extent that it literally scares people. Often, people have confessed to hearing noises but not witnessing or seeing anything paranormal.I guess it was the same case with me at Bhangarh in 2005.

And, this precisely is the reason for carrying the BoseQC35 II headphone on my latest Bhangarh visit. One can adjust the level of noise cancelling between three levels to better fit our environment. So, however, the music makes you feel, you can really feel it. With nothing in the way. Not even the howling and screeching of the ghosts!! *wink wink*

I am glad I was able to overcome this fear of the unknown through superior acoustic technology.

To my future self, I would like to console that Bose believes in Better Sound With Research and may positively come up with transparent miniature earplugs with the same impeccable noise-cancellation technology.

For the readers wondering why…Well, I have a hectic and unavoidable social life and I am so done with all the useless sycophancy and vanity talks that happen in these parties and get-togethers. I would love to be politically correct with that perfect synthetic smile and acknowledgments all the while cancelling the unnecessary noises around me!! :p

‘Haunted’, claimed all… ‘We could hear weird voices and noises’, said some, while a handful vouched there was nothing really spooky about the new place. These are the reactions of friends when they got to know that we are being posted to the cantonment in the mountains of the Pir Panjal. Finally, the time has come to buy a BoseQC35 II of my own!

Because I know that when Bose is here, there is nothing to fear 🙂

This Story is a work of fiction based on my trips to Bhangarh. It has been written for IndiBlogger’s BoseQC35 contest.

Credits: Except for the image of the Bose HeadPhone that has been downloaded from the official website, the rest of the images have been clicked and edited by Meenakshi.J for Polkajunction.

12 thoughts on “Trip to Bhangarh with BoseQC35 II : A Travel Story of Ruins, Fear and Sounds”