‘Trigart Kangra Valley Festival’ read the invite, and I was a bit puzzled. I pondered over the connection between Kangra valley where the event was happening and the word Trigarth(Trigart) until a simple google search threw me off-guard. The search result made me realize how little I as an Indian knew about this ancient land of ours. There was no way of saying a ‘no’ to the prospect of being part of this TCBG trip to cover the very first Trigart Festival put together by the Department of Language, Art and Culture of Himachal Pradesh Government! 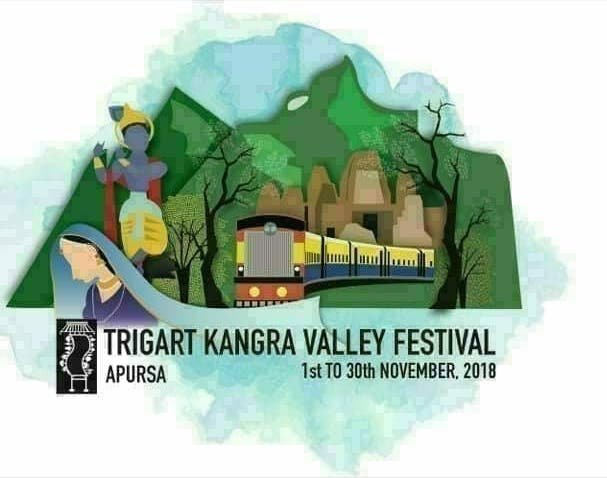 A brief history of Trigarth

Ancient Indians until the 11th century mentioned/called Kangra valley in Himachal Pradesh as Jalandhar or Trigarth. Trigarth referred to the three great rivers or three great capitals that quenched the water needs of the region. The kingdom of Kangra comprised of all the areas between the rivers Sutlej and Ravi and included the plains of Punjab. The Kangra kingdom also had three capitals Multan (presently in Pakistan)  known as Kashyap Pura in ancient times, Jalandhar (present-day Jalandhar, Punjab, India) which was a flourishing city of trade and the hill-city of Kangra which was the third capital. The city of Kangra has been known and mentioned in texts with various names as Bhimkot, Nagarkot, Susarmapura and Katoch, as the Katoch Dynasty ruled over the Trigarth kingdom.

As a tribute to the richness and ancient heritage of this valley, the very first Trigart Kangra Valley Festival was inaugurated on the 1st of November at the Kangra Airport with much fanfare. I was part of the TCBG media team that covered the inauguration ceremony presided over by Shri Kishan Kapoor – Minister for Food, Civil Supplies & Consumer Affairs of Himachal Pradesh. While speaking to us, he stressed on the need of such festivals to garner support for Himachali heritage, arts and culture which are on the verge of being forgotten owing to rapid urbanization and westernization.

Chief Secretary of Dept. of Language, Art and Culture, Himachal Pradesh Government – Dr.Purnima Chauhan, gave a quick media bite about the conception of Trigart Kangra Valley festival. She said, ‘Trigart is a hub and spoke model that seeks to bring diverse local cultural initiatives onto a calendar and attract tourists to the often ignored heritage and lesser-known niches of the beautiful Kangra valley beyond merely Dharamsala! We plan to provide a Trigart hop-on hop-off with the festival bus next year so that visitors need not self-navigate the valley…’

She urged us to visit the eco-friendly and aesthetically made mud-homes of Rakkar village, the often ignored splendid Kangra fort of the Katoch dynasty, the cave temples of Masroor and other less explored places of the ancient Kangra valley. And, honestly, I wasn’t aware of these places except for the Kangra fort. 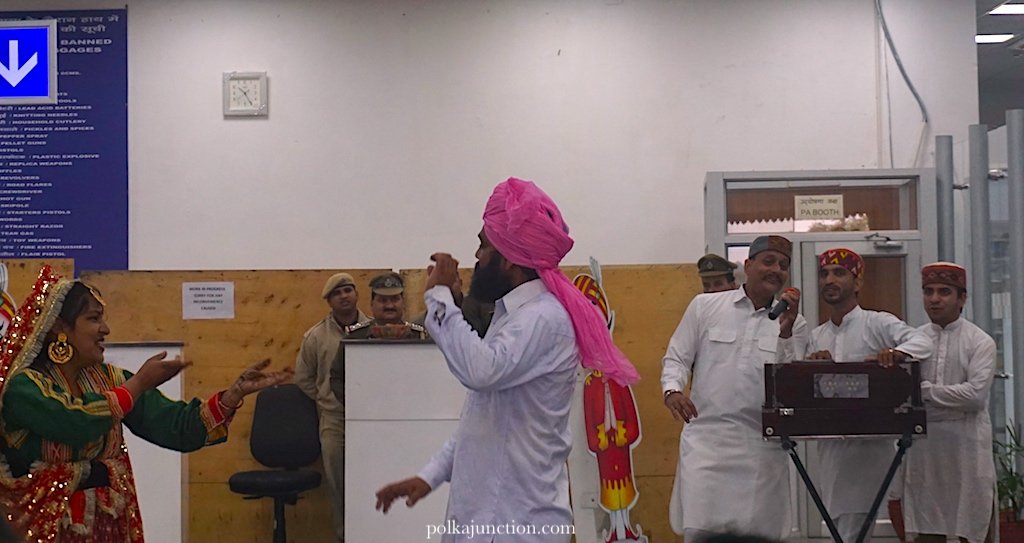 An exhibition of Kangra miniature paintings and ornamented exhibition by the students of NIFT Kangra, were the scheduled activities for Day1 of the Trigart Kangra Valley Festival that we witnessed. Apart from these, Gaddi dance performances and a cultural dance celebrating the Indo-Tibetan friendship enthralled us. 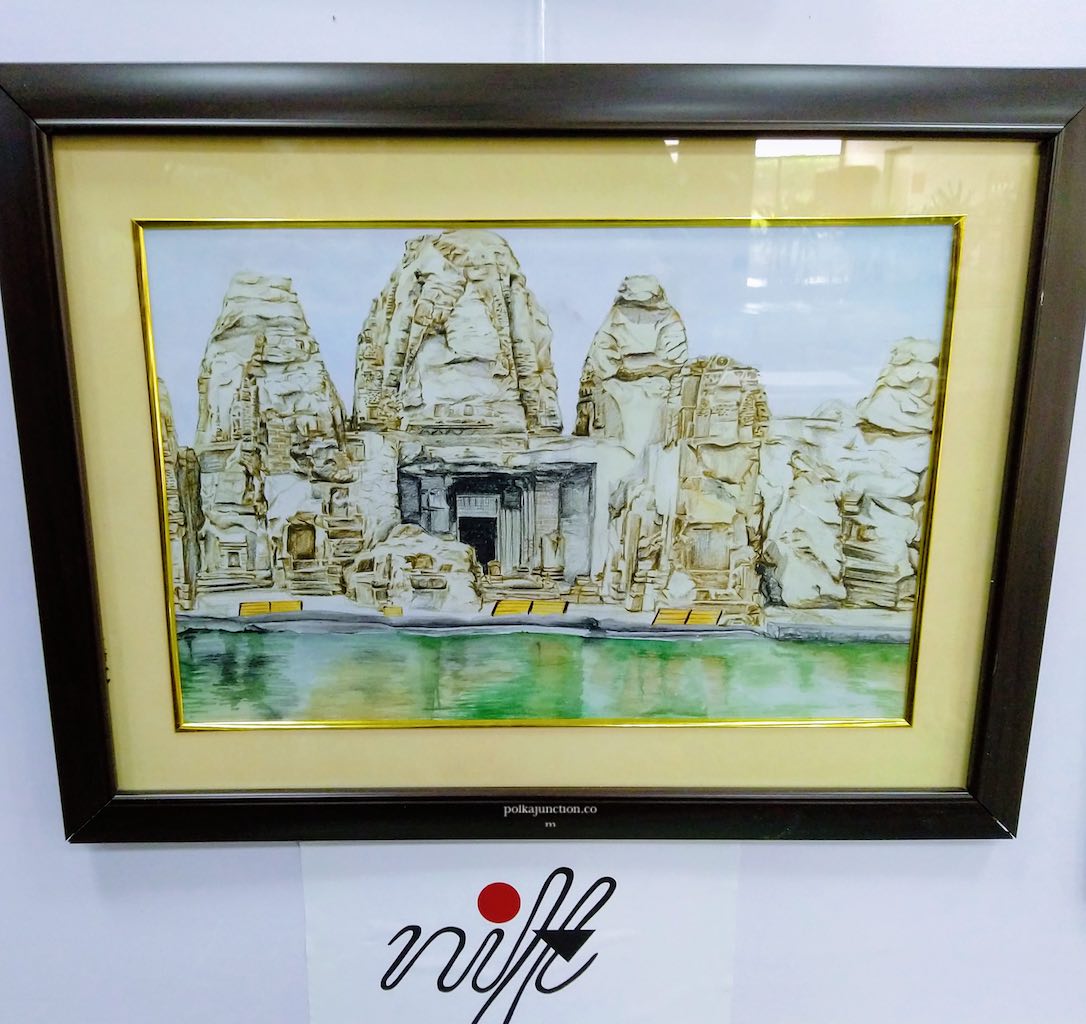 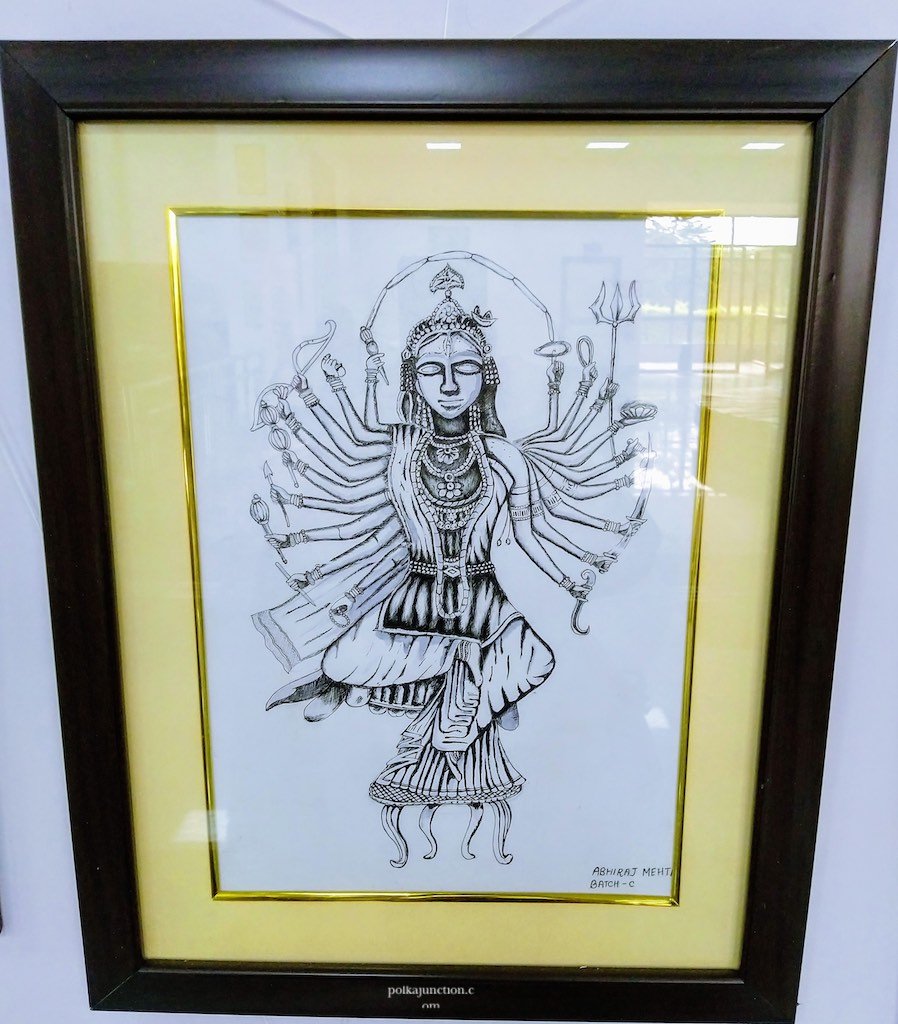 On the same evening, we were part of the Dharamshala International Film Festival (DIFF) that aligned with the ongoing Trigart Kangra Valley Festival. DIFF 2018 was inaugurated by Mr.Manoj Bajpayee who also conducted a workshop on film-making. Unfortunately, we could not make it to the workshop the next day, as it was raining heavily and our schedule went haywire.

However, we were happy to watch the inaugural short movie of ‘Namdev Bhau’ made by a Ukranian director that garnered a lot of applause and appreciation.

The best aspect of the conceptualisation of Trigart Kangra Valley Festival was the ready access to activities keeping in mind the convenience of the general public. The schedule was made in a way that the activities of the festival were spread across various villages and towns of the Kangra valley and not just restricted to tourist towns of Dharamshala and Mc Leodganj.

Tourists and travellers, especially back-packers need no introduction to Dharamshala which is in close proximity to Mc Leodganj – an abode for Tibetans in exile, living here in India. The Dharamshala College Auditorium was witness to a series of classical programmes some of which we had the privilege to attend. 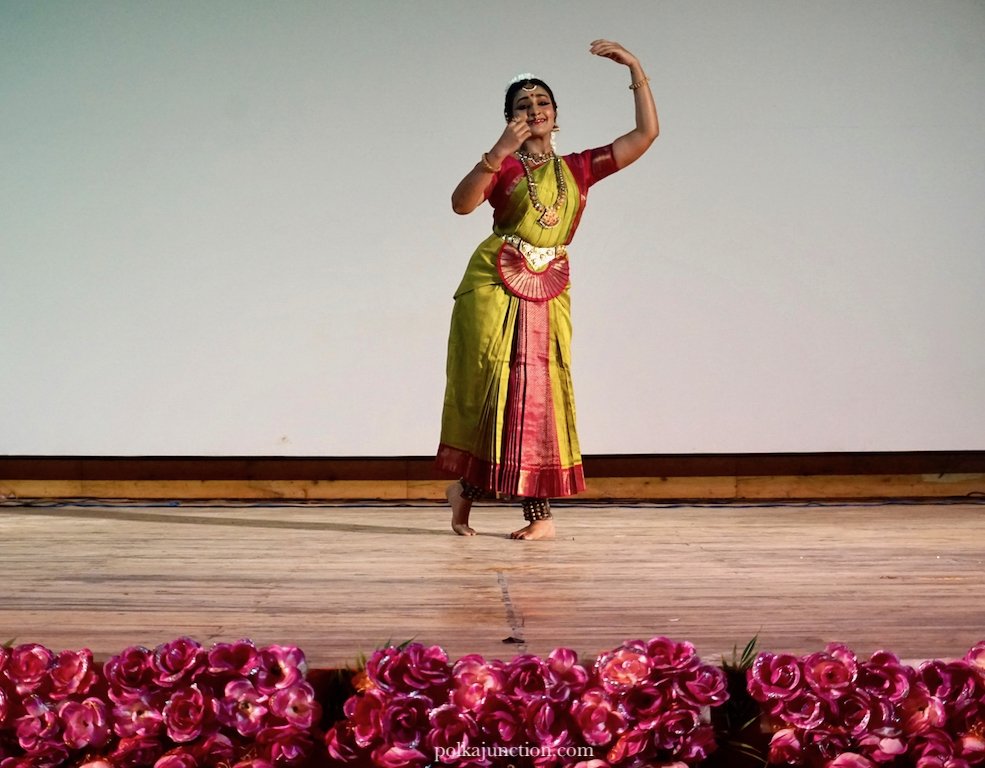 The ancient Trigarth kingdom which included present-day Kangra has references even in the Mahabharata, and the  12th century Rajtarangini by Kalhana. Remnants of the tradition of art they patronized have filtered down to recent times in the world famous Kangra miniature paintings. A series referred to as the Ragamala paintings, as they depicted Ragas, visually were lauded at the Trigart Kangra Valley Festival from 1-4 November 2018.
The 4 day festival  presented five Ragas from the Ragamala paintings, in various ways – through dance (Kathak Delhi based, Mahua Shankar, and Bharatanatyam, Chennai based Jai Quehaeni), thumri and folk music, by internationally acclaimed Malini Awasthi, Khayal by Shuheb Hassan, and instruments (sitar- Fateh Ali Khan ,sarangi -Ustad Murad Ali Khan, flute Pt Ronu Mazumdar). Malini Awasthi’s flight got cancelled and she drove through the night to make it to the concert as she believes that it’s important to take our great classical tradition into the interiors as well. Ronu Mazumdar sadly could not make it with the last minute cancellation of his flight to Dharamshala, so, his Shimla based disciple Haridatt Bharadwaj played in his place. 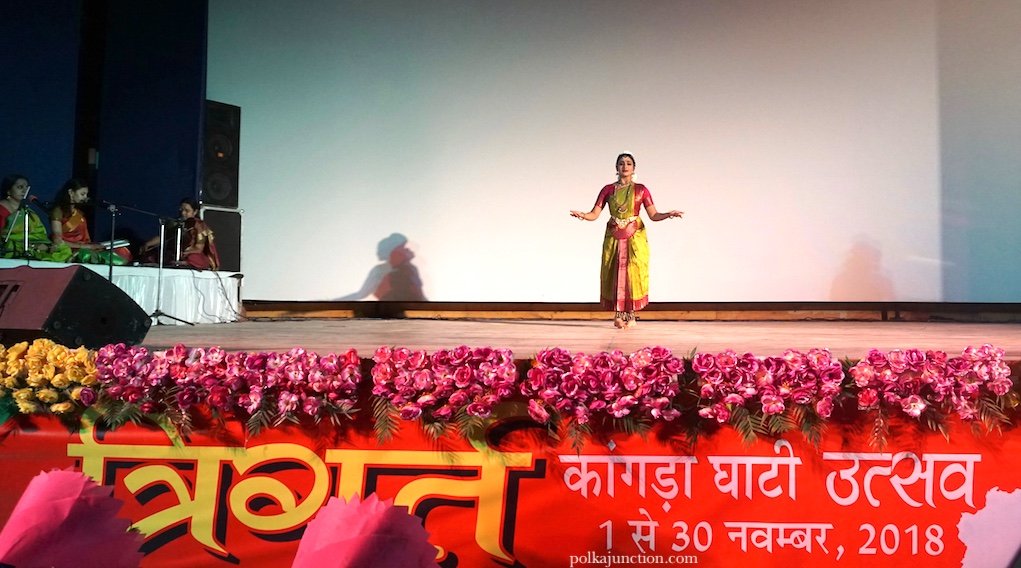 An unusual first of its kind concert was Jai Quehaeni dancing to vocal accompaniment by Vijayshri Vittal, the disciple of Bombay Jayashri who sang the Carnatic equivalents of the same five Ragas, in the Hindustani style. (Ragas- Bhairav, Malkauns, Khamach, Hindol and Kalyan).
The act had been specially curated by Guru Chitra Visweswaran and Bombay Jayashri. It was incidentally Jai Quehaeni’s first concert in North India, who later said – “If I have managed through this presentation of Bharatanatyam to kindle an interest in someone in the art, that would be enough for me. After the concert, someone came up to me and said this was not only a dance, it was really like a  painting where everything together completes the picture – the vocals, the percussion, the instruments, the lighting. Together, in all its hues, a total presentation is made”.

While some may debate the need for a Bharatanatyam performance in Himachal, I think it is a unique way to introduce a slice of India to the locals. Having lived in the hills, I have seen local people enthusiastic about being a part of such festivities.
However, the turn out for these performances at Trigart Kangra Valley festival was a bit disappointing owing to the unpredictable weather and lack of publicity. In these hilly areas, where there is a lack of entertainment avenues, such festivals could have grabbed eye-balls with the right publicity and organizational team. The department had the zeal and resources to organize an event on such a large scale with the right intention, which is commendable though! 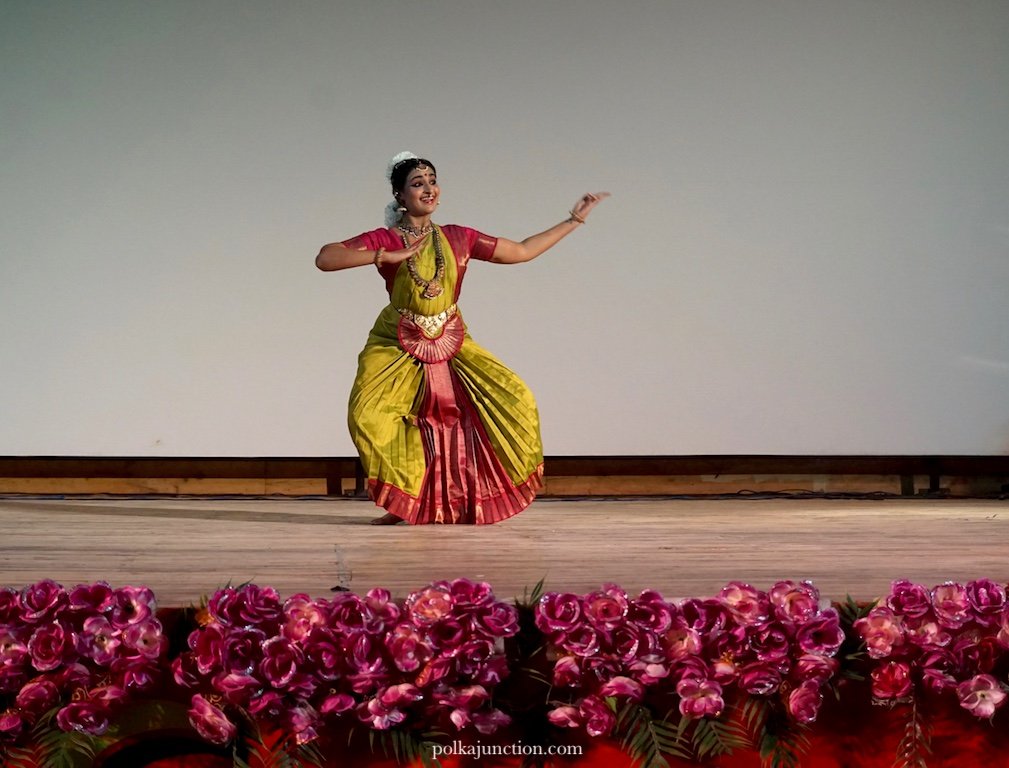 Sidhbari, Andretta Pottery village and Kangra fort too were the venues of the month-long Trigart Kangra Valley  festivities.

While on one hand, the Trigart festival had taken onus to revive and bring forth ancient art forms of Kangra valley, on the other hand, it also had come in support of contemporary art exhibitions like ‘In the Woods’ – a conceptual art exhibition happening in a remote Himalayan village of Gunehar amidst the woods of Bir-Billing.

The last leg of the Trigart festivities that we attended, took us to a beautiful Himachal village in the footsteps of the Shivaliks. The 4tables project run by Frank Schlichtmann played host to perfection on our Trigarth tour. A separate post on this wonderful venture called ‘The 4tables project’ is coming soon on the blog. So, stay tuned!

ITW -1 (earlier edition) was a runaway success. This year around, Frank changed the concept a bit and asked the artists to send in digital format of their artwork. He attributed this to two reasons: firstly, it is a reflection of the digital world we live in and secondly, a lack of funds and resources that deterred a physical presence of both the artists and their artwork. Apart from this, seven poets (young Indian artists) were asked to send across their poems in audio format as part of the Poet-Trees concept. These poems were relayed through a speaker under a tree and the visitors could make use of the sitting arrangement and hear to these poet-trees in salubrious surroundings amidst the woods.

‘In The Woods-2’ exhibited three black-boxes to its visitors apart from the seven poet-trees. The first black box projected digital artwork of three artists in a loop. The illustrations were based on the theme of living in a digital urban space.

The second black box juxtaposed varied noises and sounds heard in urban spaces, making me exit the noisy environs of that box, that was too close to the everyday noises I hear in Delhi. The purpose of this black box was to sensitize visitors to our environment and appreciate nature. 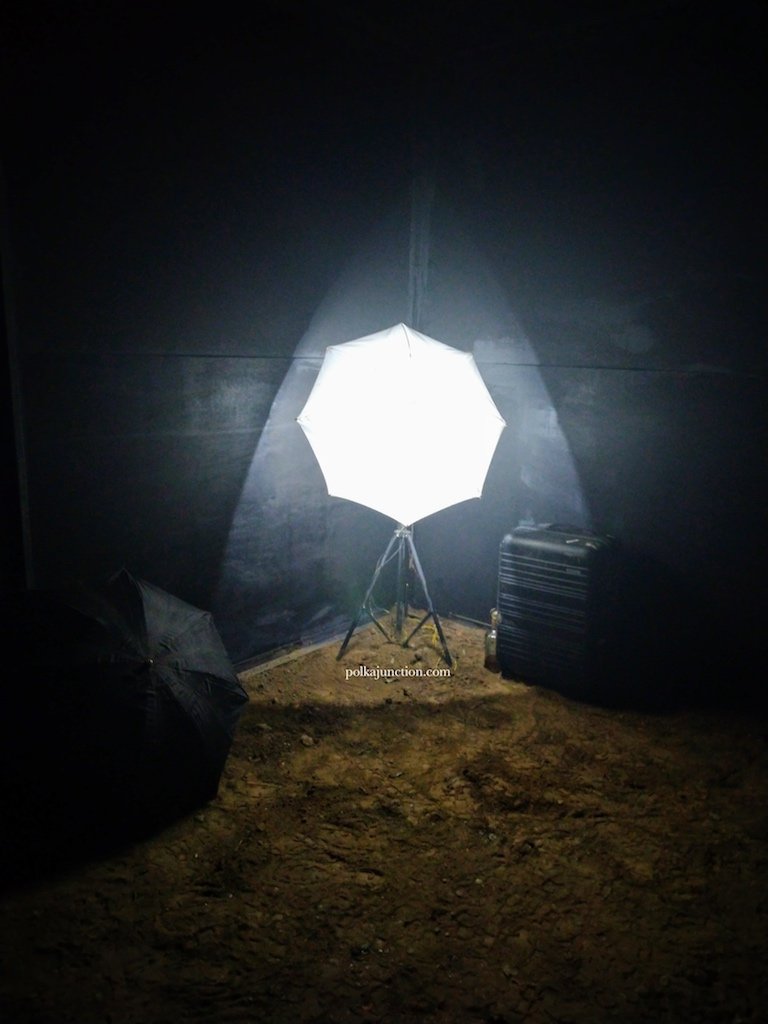 The third black box was in the open with 16 mirrored frames hanging – 15 of them had portraits of the Gunehar villagers and the 16th frame was empty to emphasize that ‘You see a part of yourself in others while others see a part of themselves in you’. I loved this art space most of the three black boxes. 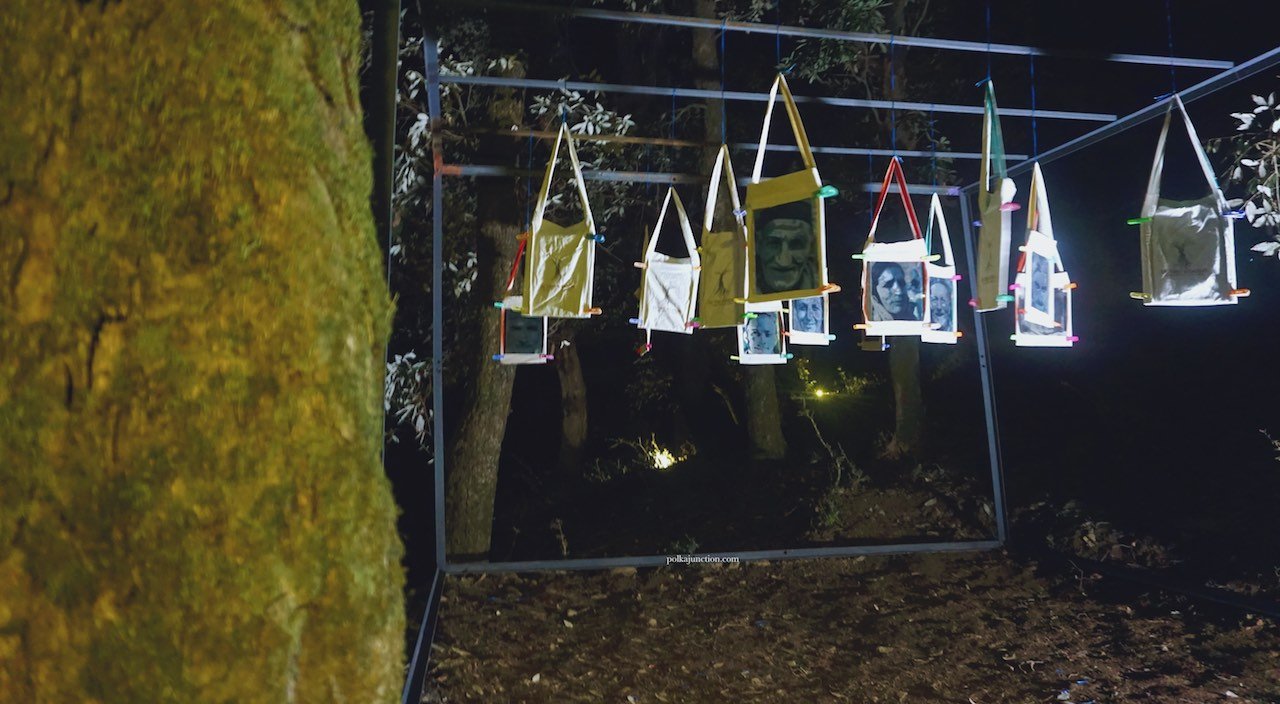 The overwhelming experience of attending various events as part of Trigart festivities and subsequent revelling amidst the woods of Gunehar village (In The Woods-2) left a deep impact on all of us as a group. In a span of a few days, we were exposed to the richness of ancient art forms on one end of the spectrum, while on the other, we came in close contact with contemporary stories, art forms and opinions on modern ideas and concepts. Isn’t this an enriching experience in itself?

Travel is all about such rich experiences that broaden our understanding and open varied channels for an exchange of ideas and dialogues. And I guess, concepts like In The Woods and Trigarth have sowed healthy seeds of imagination for an artistic future. Only when people take note of these activities, talk about them, provide holistic sustainability and spread a word, do these concepts thrive, of course with ample logistical support and publicity from the government. Glad to have been part of this artistic endeavour in our own little possible way! 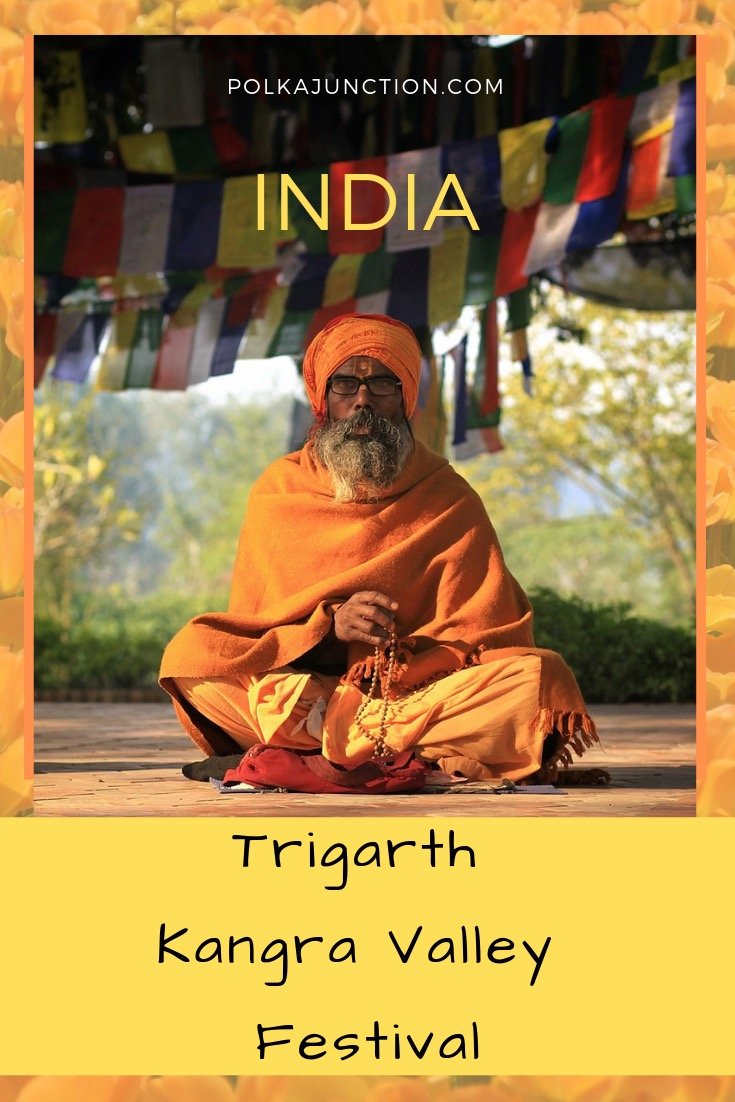 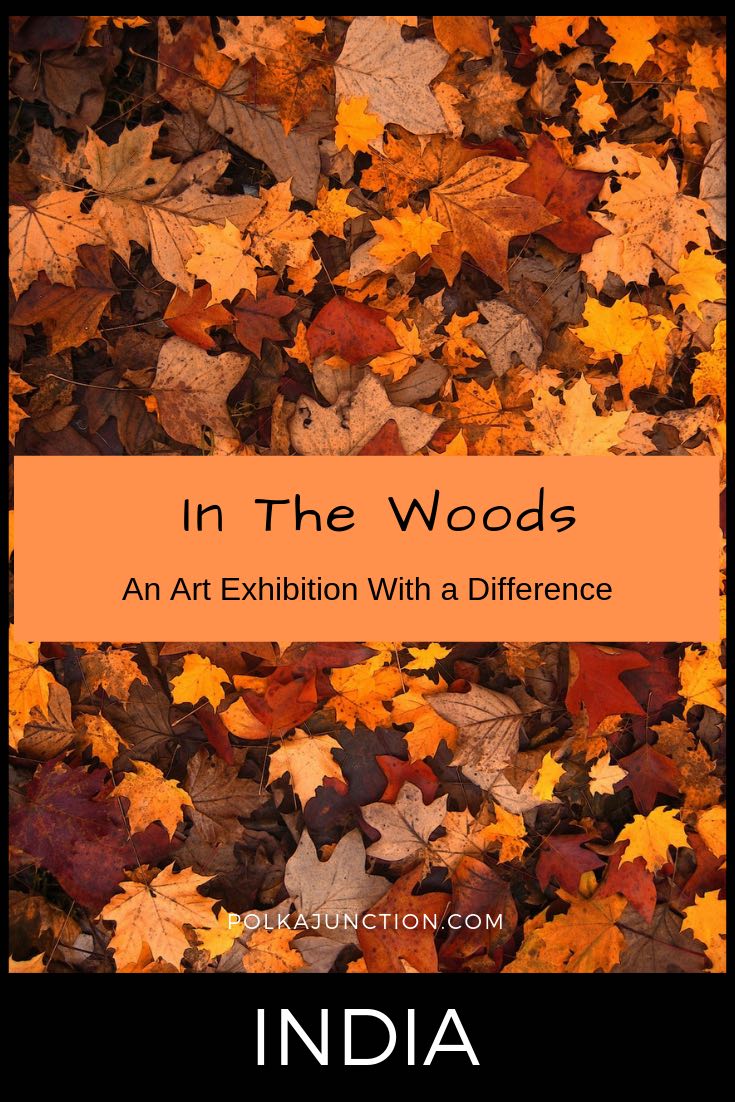