I have quite many travel plans lined up in the coming weeks up until the month of July. And, this means umpteen alerts on mobile and through e-mails about flight and train- bookings and departures.

I was wondering, why on earth would an airline shift all its operations in such a short span of time?

That is when I read the whole case and realized that it would benefit many more passengers and would greatly enhance the customer services. Hence, I thought to share this information with my readers too.

The GMR led Delhi International Airport Ltd (DIAL), announced on 16th March,2018 in its Press Release that Indigo and SpiceJet are set to partially shift their operations from Terminal 1 (T1) to the newly revamped Terminal 2 (T2) of IGI Airport with effect from 12.01 am on March 25, 2018.

As per the recent order of the Apex Court, both airlines submitted lists of sectors to DIAL for shifting to T2 and DIAL gave its consent to the proposal. 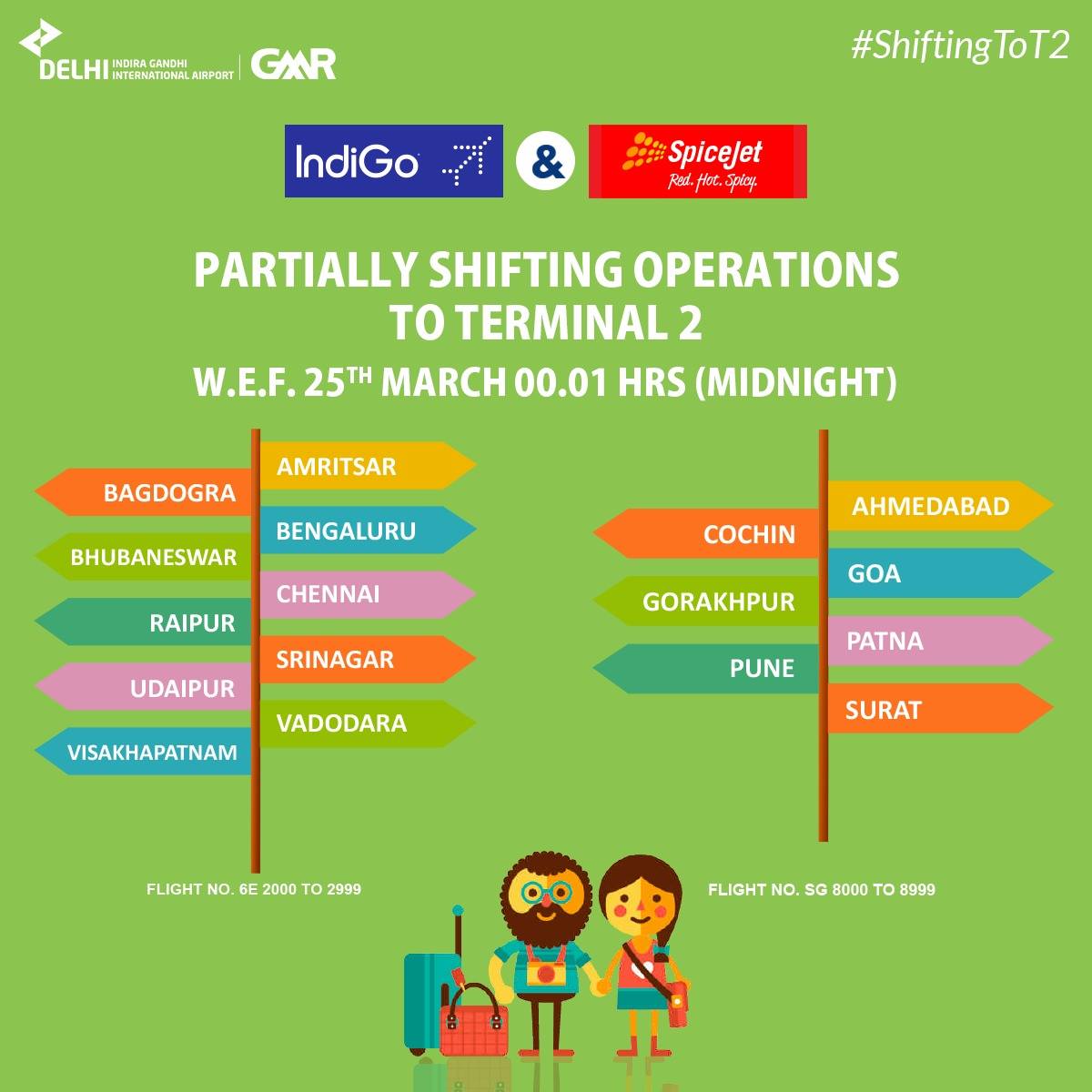 Indigo would shift 10 of its sectors (flight nos. 6E 2000 to 6E 2999) to T2. These include destinations of Amritsar, Bagdogra, Bengaluru, Bhubaneshwar, Chennai, Raipur, Srinagar, Udaipur, Vadodara and Vishakhapatnam.

SpiceJet would shift 7 sectors (flight nos. SG 8000 to SG 8999) to T2. These include destinations of Ahmedabad, Cochin, Goa, Gorakhpur, Patna, Pune and Surat.

With the partial shift of operations of the two airlines to T2, passenger area for the Flyers will increase from the currently available passenger area of 25,917 sqm at T1 to combined 62,010 sqm. T2 adds additional 36,093 sqm passenger area.

Considering the growing demand for more capacity and to provide the hassle-free and safe journey to the passenger during the expansion of T1, DIAL has refurbished T2 to increase the passenger area and create more room for traffic growth.

In line with Master Plan 2016 and to facilitate the growth at IGI Airport, DIAL had earlier proposed partial shifting of all three carriers to T2 until the completion of the expansion of T1. While GoAir was the first airline to shift its entire operation to T2 in October 2017, Indigo and SpiceJet are partially moving to T2 now. This is a temporary move to ease the pressure of fast-growing traffic at T1. The move will enable the expansion works at T1 effectively. T1 is set to be expanded from the current capacity of 20 million to 40 million per annum with 22 aerobridges, and state of the art infrastructure spanning all major areas of the airport i.e. Landside, Terminal and Airside and will be completed within four years.

Commenting on the development of #ShiftingToT2 , I Prabhakara Rao, CEO-DIAL said, “In view of the robust passenger growth and upcoming airport expansion works, DIAL has revamped and recommissioned Terminal 2 of the IGI Airport on 29th October 2017. We welcome IndiGo and SpiceJet to Terminal 2. This will enable us to start the expansion works at Terminal 1. During the expansion of Terminal 1 over the next 4 years, Terminals 2 and 3 will cater to the growing traffic over the next 3-4 years. DIAL would leave no stone unturned to make Delhi Airport a preferred Hub Airport of Asia. Our focus towards maintaining the highest level of safety and operational efficiency is unwavering. We continuously aim to provide convenience to passengers with our services.”

DIAL and the three airlines are working together for passenger benefit and providing a comfortable experience. Together with the airlines, the airport operator will ensure that the #ShiftingToT2 is seamless and all passengers flying from T2 are suitably made aware of the move and advised.

DIAL has also identified an adequate number of aircraft parking bays, airline office space and other related facilities. With T2 operating at an optimal capacity, DIAL has significantly augmented its traffic handling capacity and is now part of the 60 million club. T2 has many key features to provide a seamless experience to flyers including adequate check-in counters, X-ray machines, baggage reclaim belts, aerobridges and parking bays for aircraft.

Until mid of 2010, T2 served as the International Terminal until mid-2010 and was mothballed except for Haj Operations since July 2010. The need for utilizing the available Terminal capacity at Delhi Airport was felt in the wake of growing passenger traffic and in preparation to further developments.Hence the #ShiftingToT2

Delhi Airport has become world’s number 1 airport in the highest category i.e. over 40 million passengers per annum (MPPA) – as per Airports Council International (ACI) – ASQ 2017 rankings. It has also won the Wings India Award for ‘Most Sustainable and Green Airport’, and silver recognition for its sustainable waste management initiatives under ‘ACI Asia-Pacific Green Airports Recognition 2018’ recently. 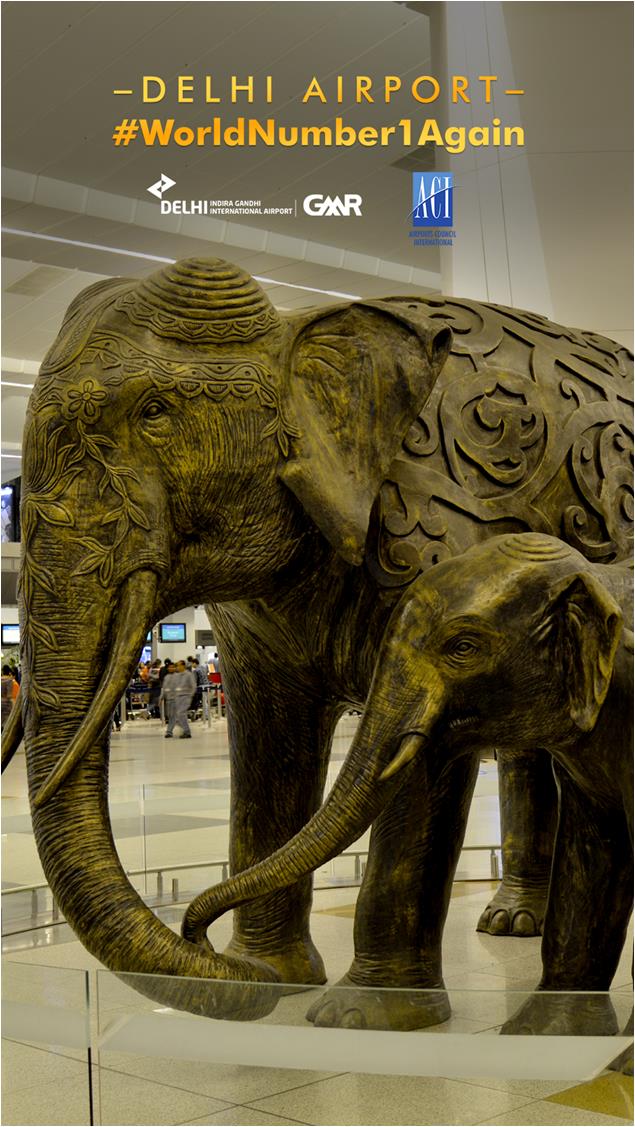 Delhi Airport has also added another feather to its cap by gaining the highest number of followers on Twitter in the Asia Pacific Region. It also holds the distinct glory of being third most popular on Facebook worldwide and ranked fifth on Twitter globally.

The airport operator today also launched a full-fledged social media campaign to generate awareness amongst the passengers. Passengers can get all the required information regarding T2 by using #ShiftingToT2.