Thirumalai Nayakar Palace also known as Thirumalai Nayakar Mahal or Madurai Palace is testimony to the city’s secularism and diversity. If Madurai is famous for its Meenakshi Amman Temple, it is equally popular for the Anglo-Indian community, the churches, the Jaina Caves, and its multicultural society.

On my recent trip to Madurai, I decided to visit the 17th century built Thirumalai Nayakar Palace, a heritage structure I had never visited before, though I have been making an annual visit to Madurai for the last three decades! Surprising isn’t it??

Armed with google maps and my cousin in tow, on a gloomy day, I finally got to visit the Madurai Palace that eluded this Madurai born. 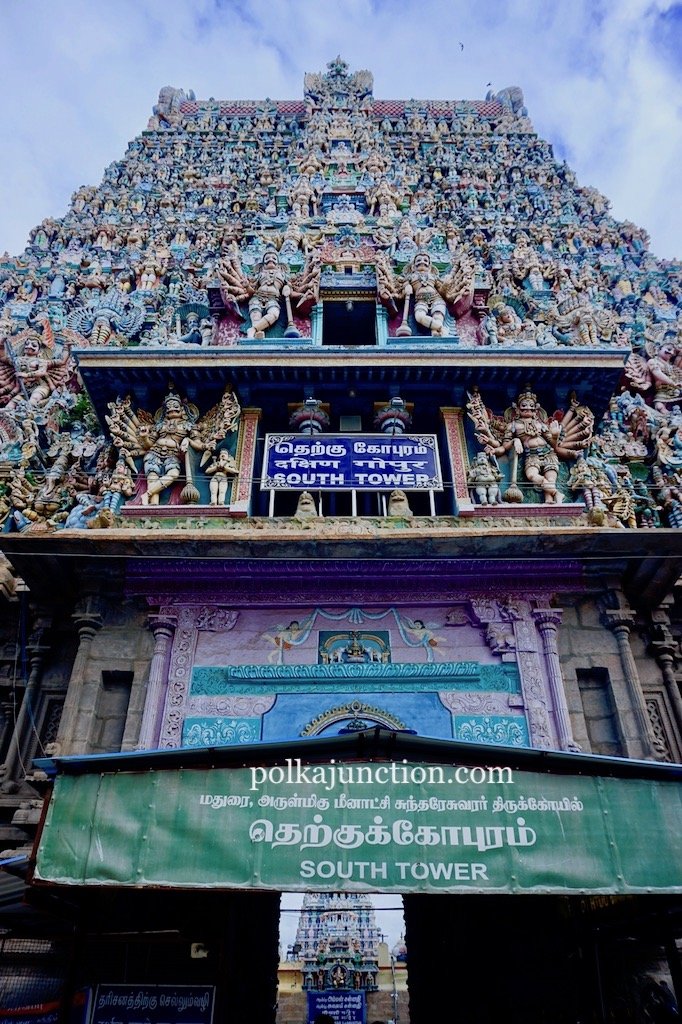 We leisurely walked through the narrow lanes of Madurai that have been meticulously laid around the Meenakshi Amman Temple. The morning scenes of a clean and buzzing ‘Thoonga Nagaram’ ( a city that never sleeps) gave us company as we meandered our way to the Thirumalai Nayakar Palace aka Nayak Palace. But not before, we washed down a plate each of Masala Dosa and Idly with the rightly brewed frothy ‘Filter Kaapi’ at the nearby Modern Restaurant.

Soon, we found ourselves in a lane behind the Thirumalai Nayakar Palace and the unpredictable Google Maps suggested us to barge in through the compound wall of the palace by creating a hypothetical lane on its map!

Thankfully, I found a lady who guided us to the actual entrance to the Nayak palace but not before letting us know that though she has been living in a lane behind the palace, she is yet to visit the Nayakar mahal. I found some solace in her words…

( Read about Maargazhi, the best season to plan a trip to TamilNadu, in another blog post of mine) 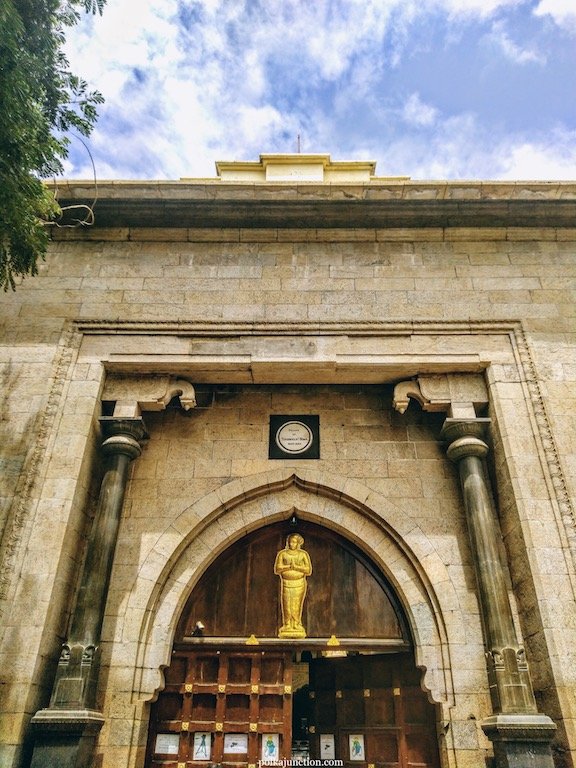 We quickly purchased our entry tickets and made an entry into the Madurai Palace through its renovated gigantic entrance and the sight that welcomed us, took my breath away. The huge columns of the palace, the long corridors, and the vast central courtyard against the clearing sky with fluffy clouds were a spectacle waiting to unfold. Trust me when I say, that all the photographs and videos you have ever seen of the Madurai palace (including the ones on this post) can never do justice to its mammoth and marvelous architecture!

Okay..maybe, personally, the only Indian movie director who comes close to capturing the nuances of this palace spectacularly in his/her frames is Mani Ratnam. From Bombay to Guru, this palace is a favourite of his and cinematographer Santosh Sivan and these are the movies that inspired my visit to the Thirumalai Nayakar Palace. There…I confessed my obsession with Mani Ratnam’s movies! 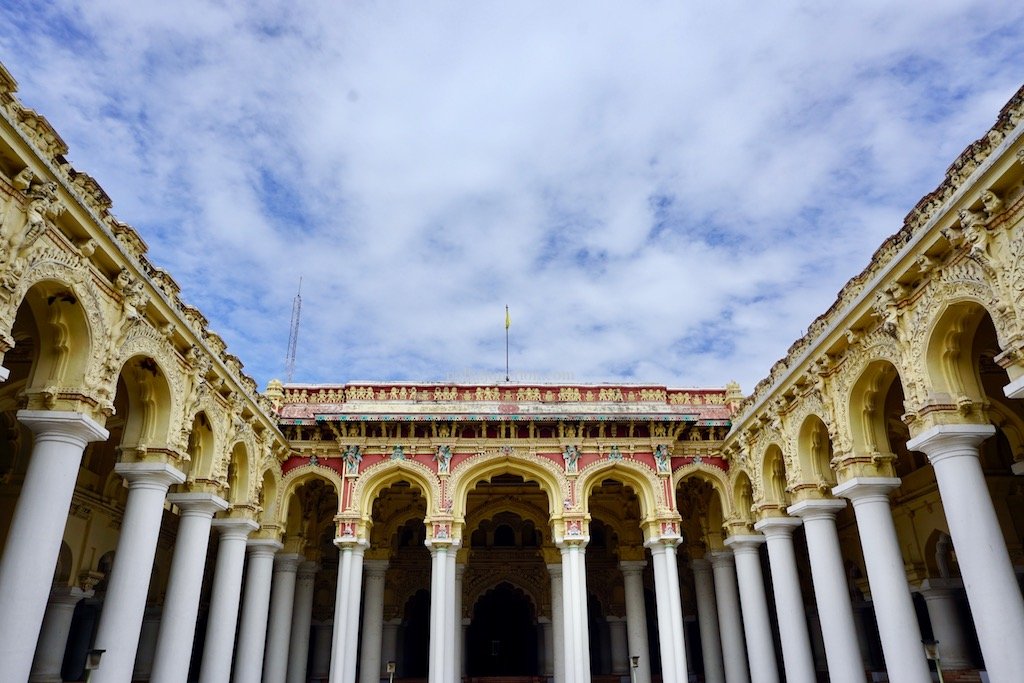 Know the history of Nayakar Mahal

The Nayaks of Madurai ruled from 1545 until the 1740s. Thirumalai Nayak, colloquially pronounced as ‘Nayakar’, was one of the greatest of the Nayak Kings. He reigned over Madurai between 1623 – 1659 and is solely responsible for building various monumental structures in and around Madurai including the Thirumalai Nayak Mahal, also locally known thus as Nayakar Mahal.

Following the norm of many a royal family – greed, deceit, and lust for power overpowered the goodness and relationships amongst the family members of Nayaks.  King Thirumalai Nayak’s grandson demolished much of the fine Madurai Palace structures, and, shifted the jewels and woodcarvings in order to build his own palace in Tiruchirapalli.

However, the erstwhile colonial Governor of Madras – Lord Napier, partially restored the palace in 1866-72 to use the place as a garrison unit.

I am not going to discuss the story behind the palace at length. Most of the historical facts are available on the internet!

The Thirumalai Nayakar Palace is a fusion of Indo-Islamic architecture. However, the elaborate entablature and rounded pillars suggest that it has shades of European, especially, Italian architecture. I was instantly transported to the FRI at Dehradun.

It is said that the erstwhile palace was at least four times bigger and larger than the present area. However, what is left and restored are just the structures that we see today. The ancient temple city of Madurai was a well-planned place and was popularly termed  ‘Athens of the East’ by the colonists owing to its well-laid-out town plan. Sadly, in recent times as the city’s urbanscape is expanding so is its woes, thanks to a clueless modern administration. 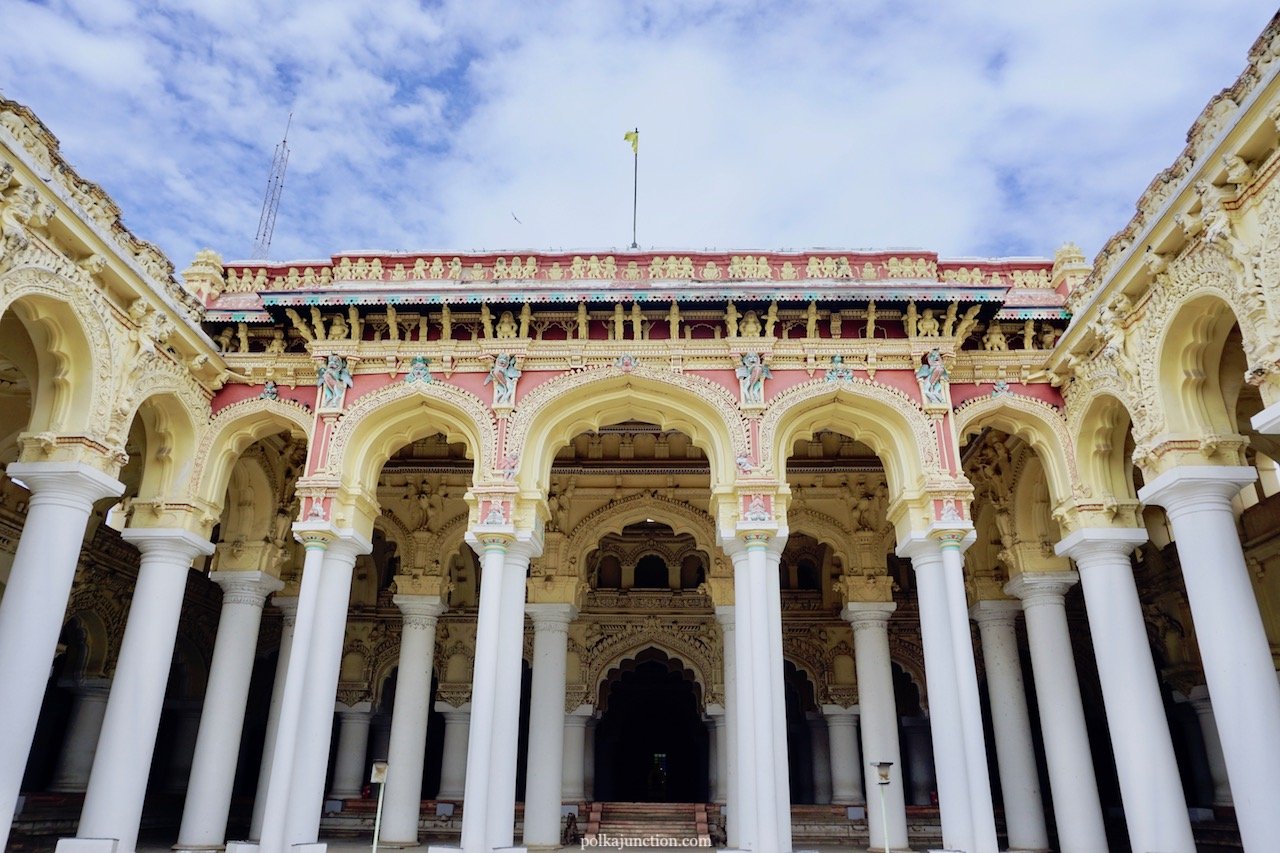 Here is another board that I stumbled upon at the Thirumalai Nayakar Palace, which gives a brief idea as to how vast the palace property was once. 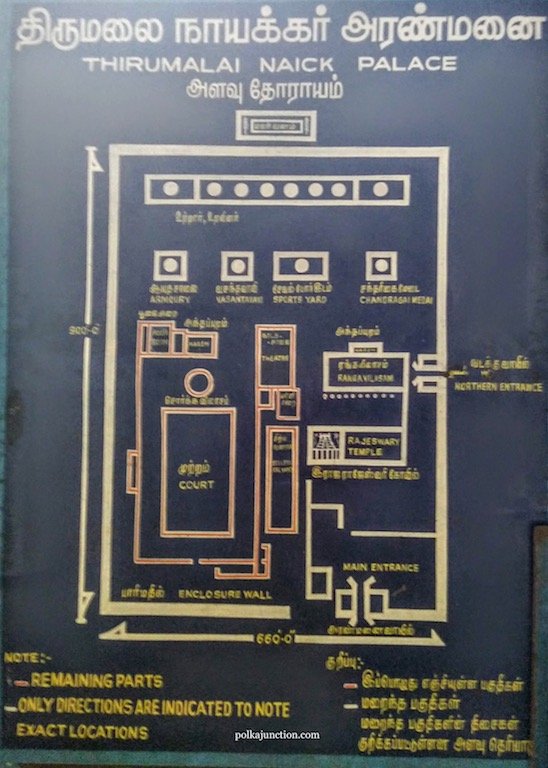 Get mesmerized by the Quintessential Courtyard of the Nayakar Palace

A central courtyard devoid of chairs would have been a treat to the eyes. However, here, it hosts rows of chairs (read ‘Eyesore’) for the ‘Light Show’ that happens in the evenings. And, the long corridors that awe you from far, are home to hundreds of pigeons that occasionally litter the place with their plumes and poop as you walk along! But then, in spite of our flying friends, the place is well-maintained. Well, let this description not take away your pleasure of walking down the memory lane and indulge in a piece of Thirumalai Nayakar’s history.

The lavish courtyard here reminded me of the ones that I explored in the Havelis of Kajra, Rajasthan 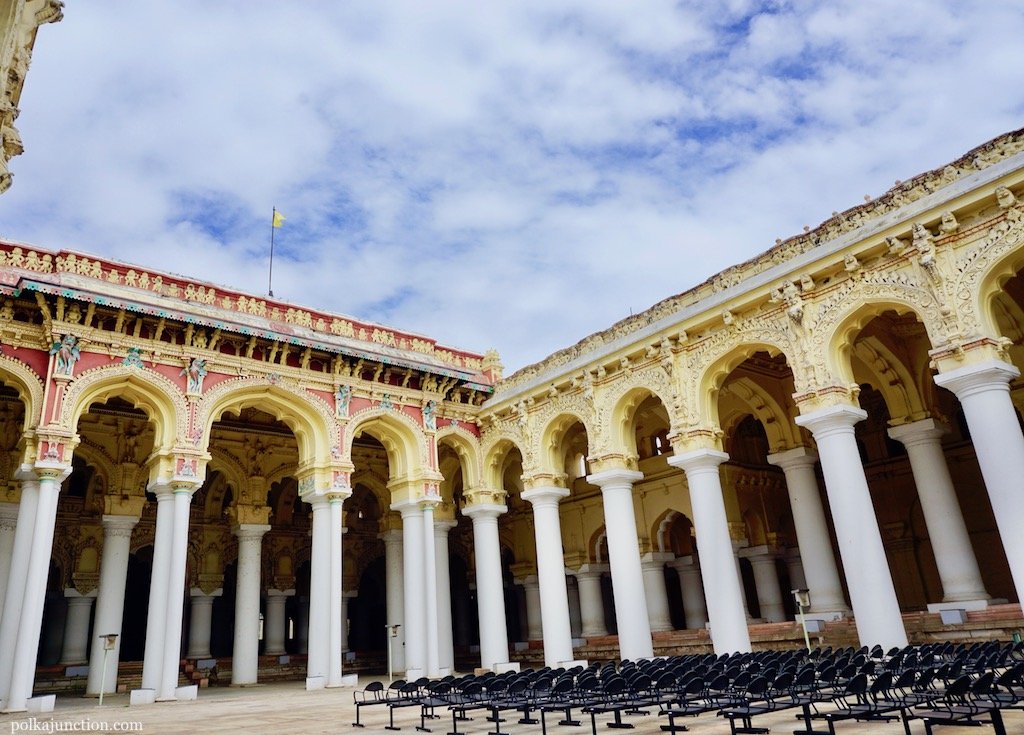 You may read about the Light and Sound show that happens here, on my blogger friend Shri Nidhi’s blog 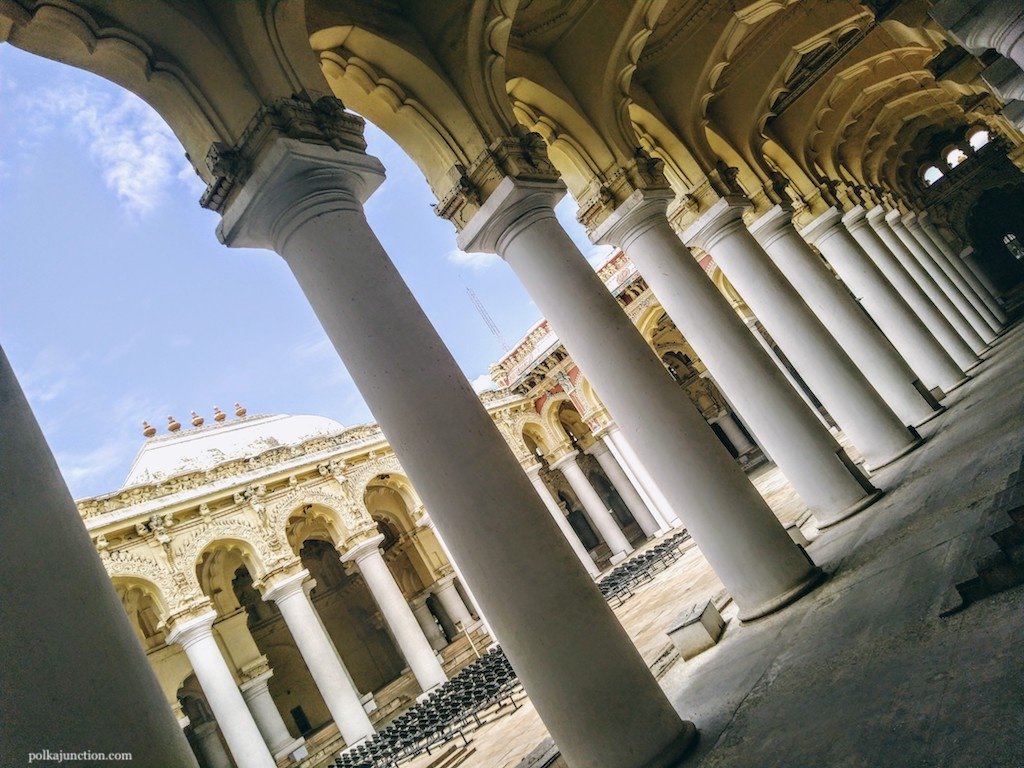 As we enter the interiors of the palace, the ‘Swarga Vilasam’ that translates to ‘Celestial Pavilion’ welcomes the visitors. This pavilion is enclosed by scalloped or multifoil arches, a staple of Islamic Architecture, and adorned with beautifully painted ceilings. A throne has been placed at the centre of this pavilion in remembrance of Thirumalai Nayakar who once ruled the temple city of Madurai. I guess it is from here that the King gave an audience to the general public. A view of the courtyard and the entrance from this throne truly shows how huge his audience would have been in those days. 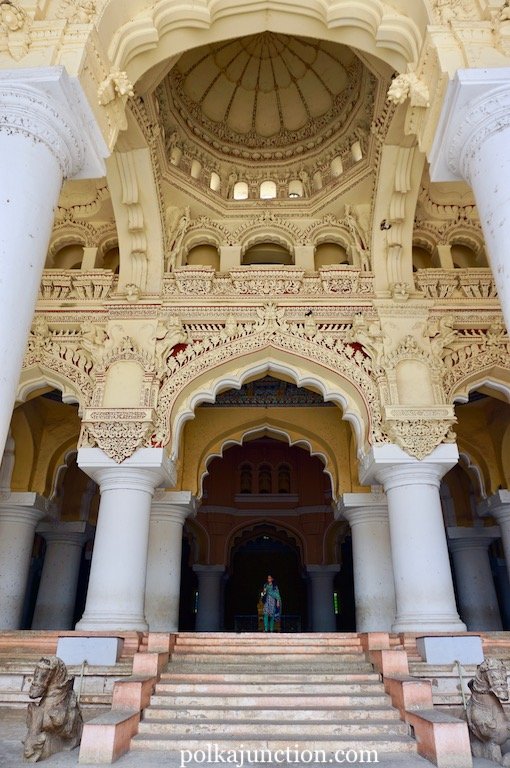 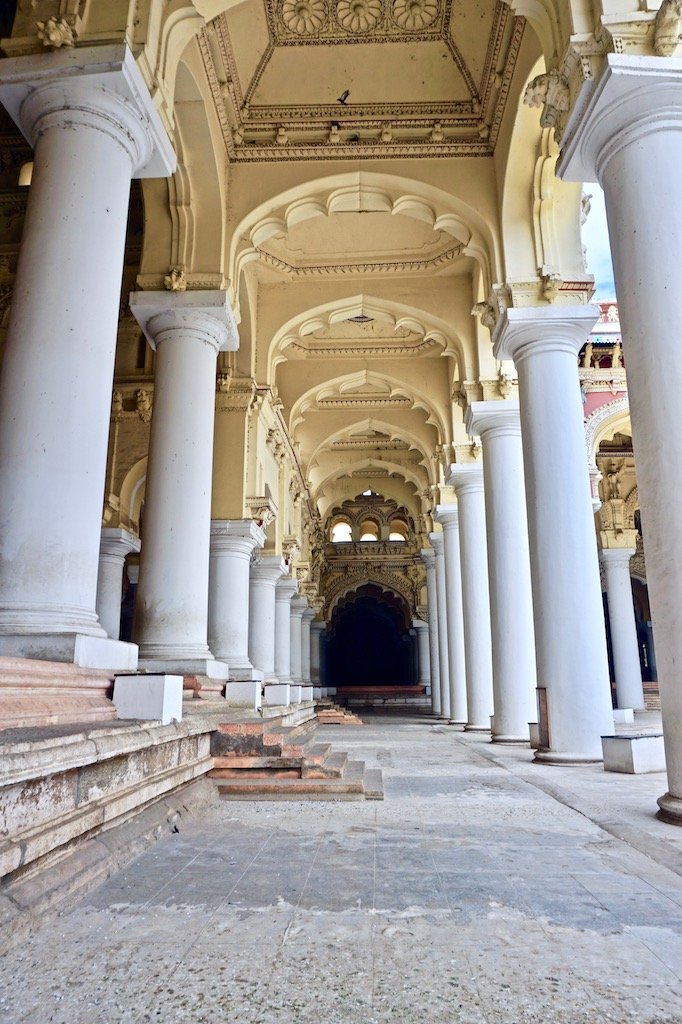 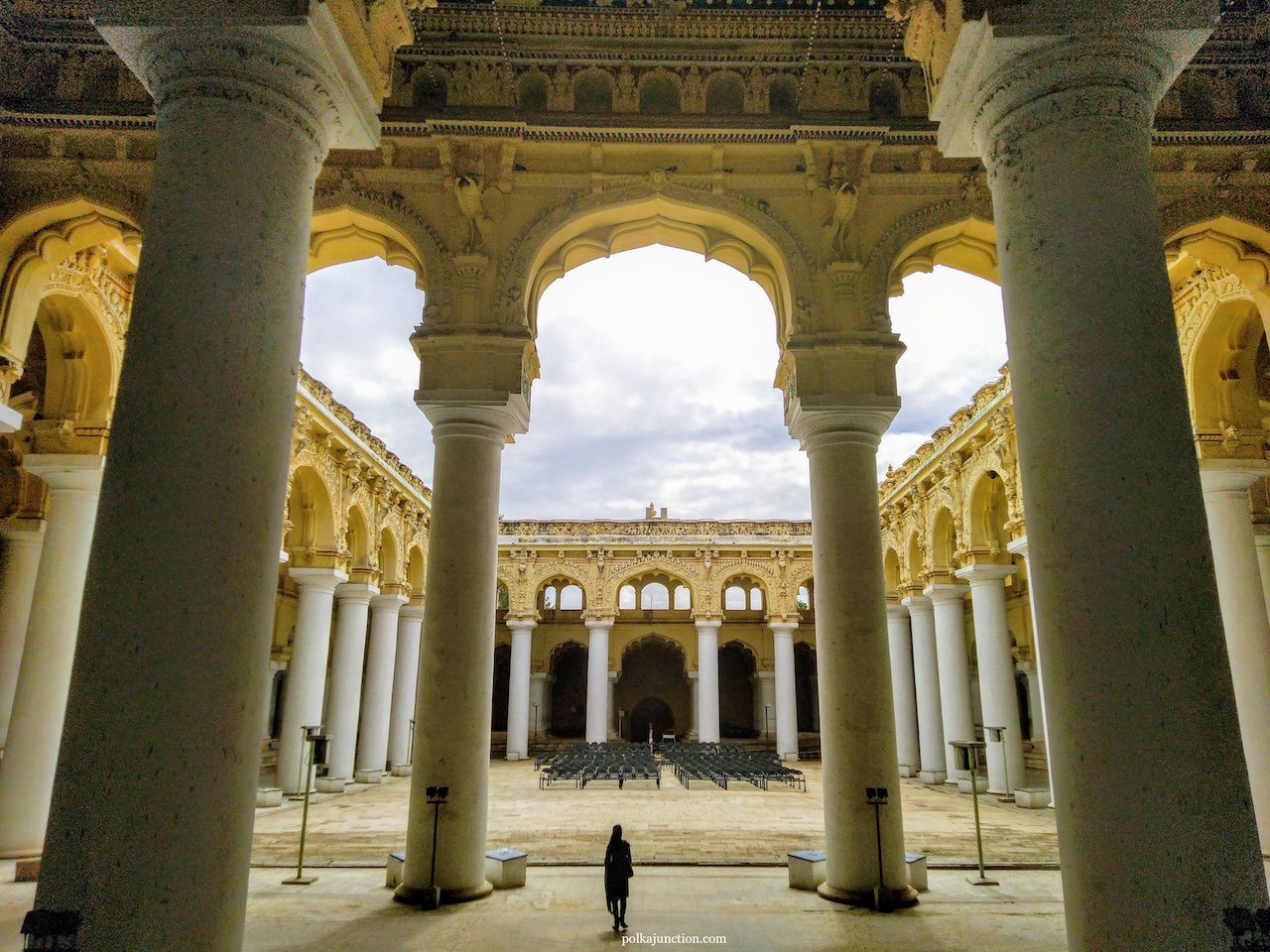 Every mortal look like a puny in front of these immortalized structures, isn’t it?

Fly virtually on the carpets of Madurai Palace

One look at the ceiling and an art lover would be mesmerized by the intricate frescoes and stucco work done here. These have been given a brand new look during the recent restoration and are similar to the ones at the Thanjavur Palace. 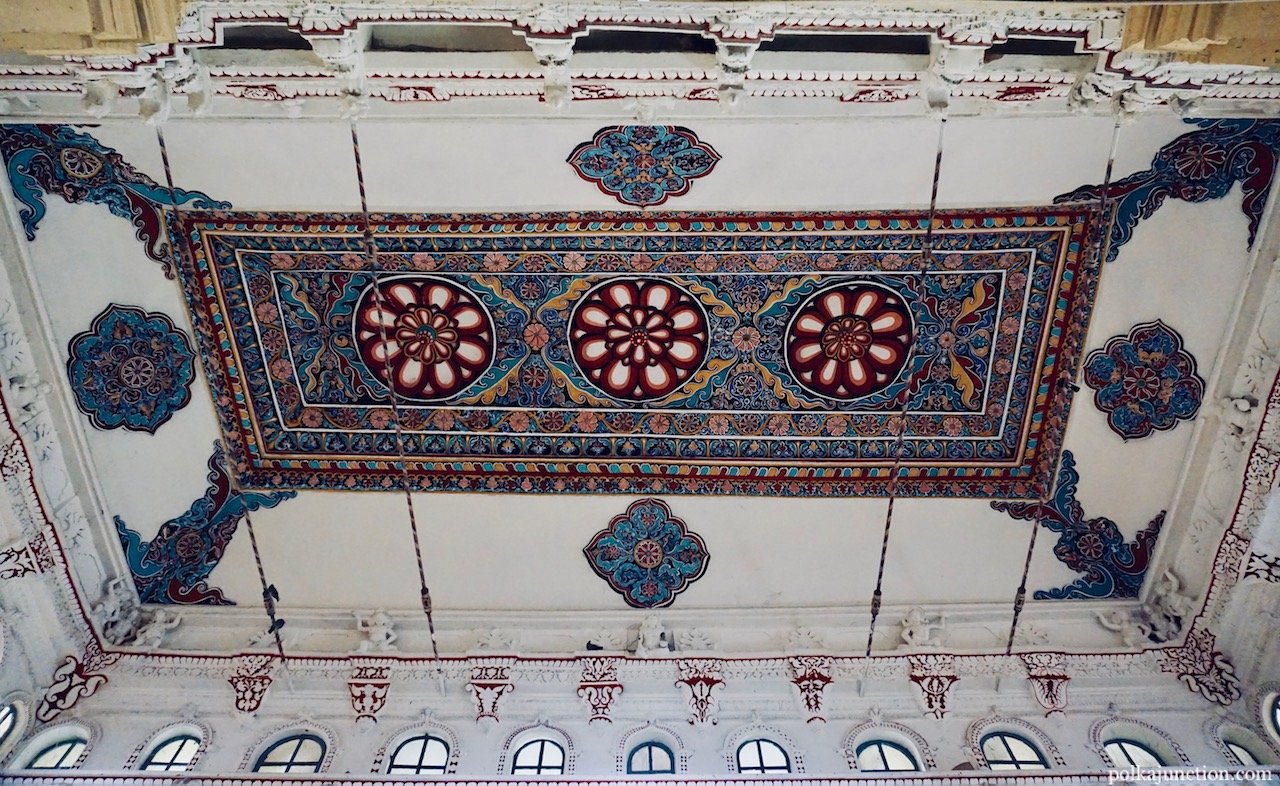 It is interesting how the artists have ensured entry of sunlight especially to facilitate a peek at the ceilings. As one enters through the dark corridor, he/she is compelled to crane their neck up towards the ceilings as a sudden shaft of light hits them. One glance at these and I was reminded of the flying Persian carpets..delicate, intricate and fascinating! 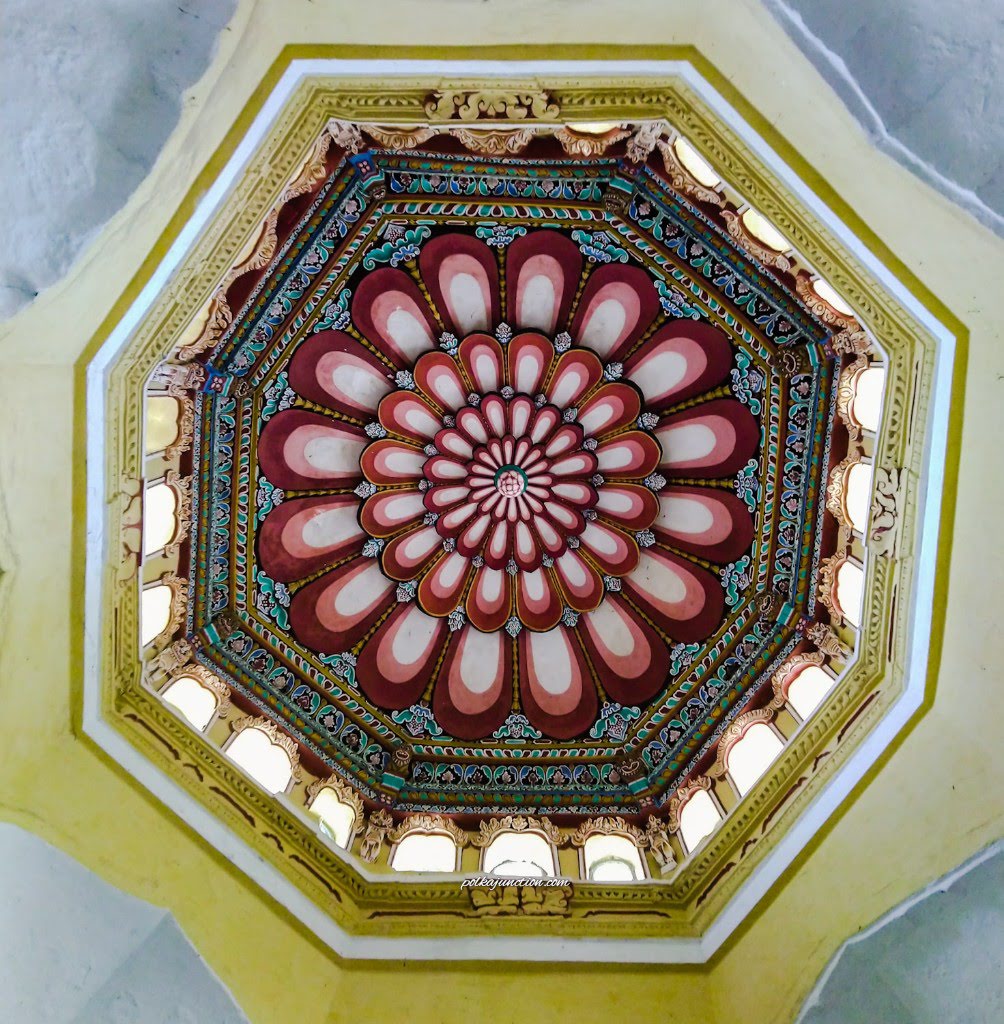 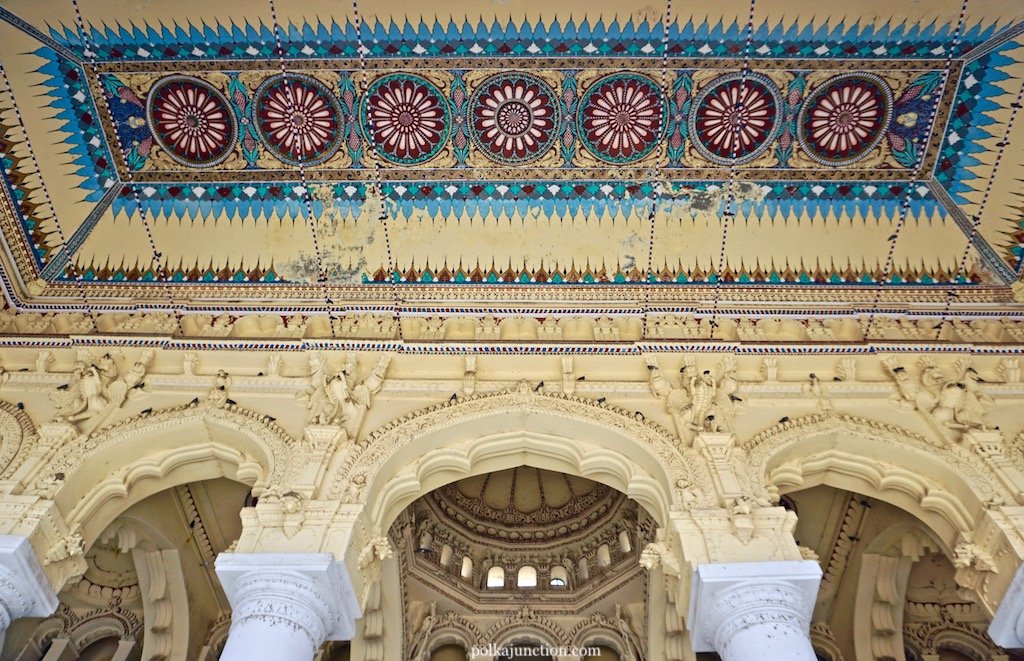 As in every palace of India, here too, a separate enclosure has been built for the entertainment needs of the royalty. This is similar to the rooms dedicated to home theatres of today’s rich! So, we have a NarthanaShaala or dancing hall that has been earnestly converted into a museum of sorts for present times. 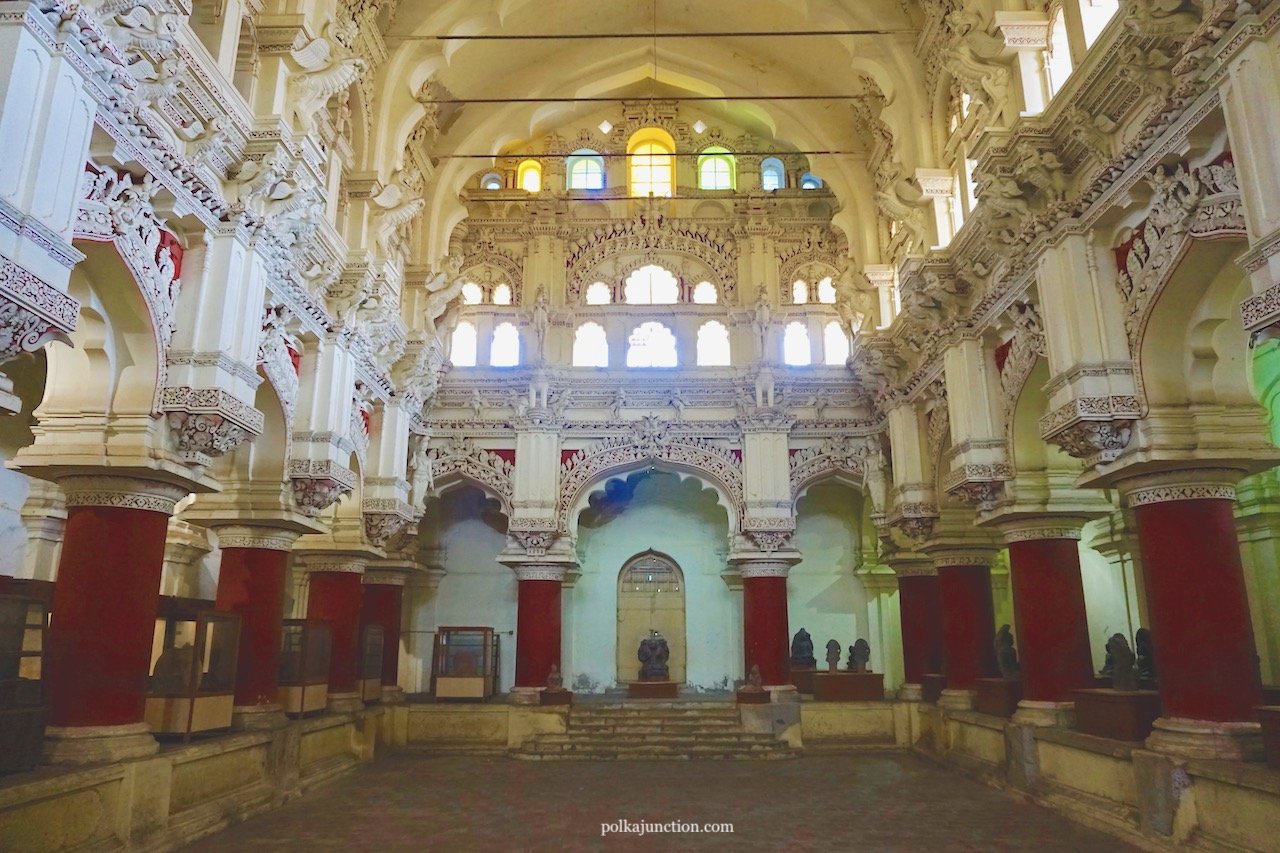 With intricate stucco work and arches, it looks mesmerizing. Each of the pillars and arches has a different pattern though all look similar from afar. 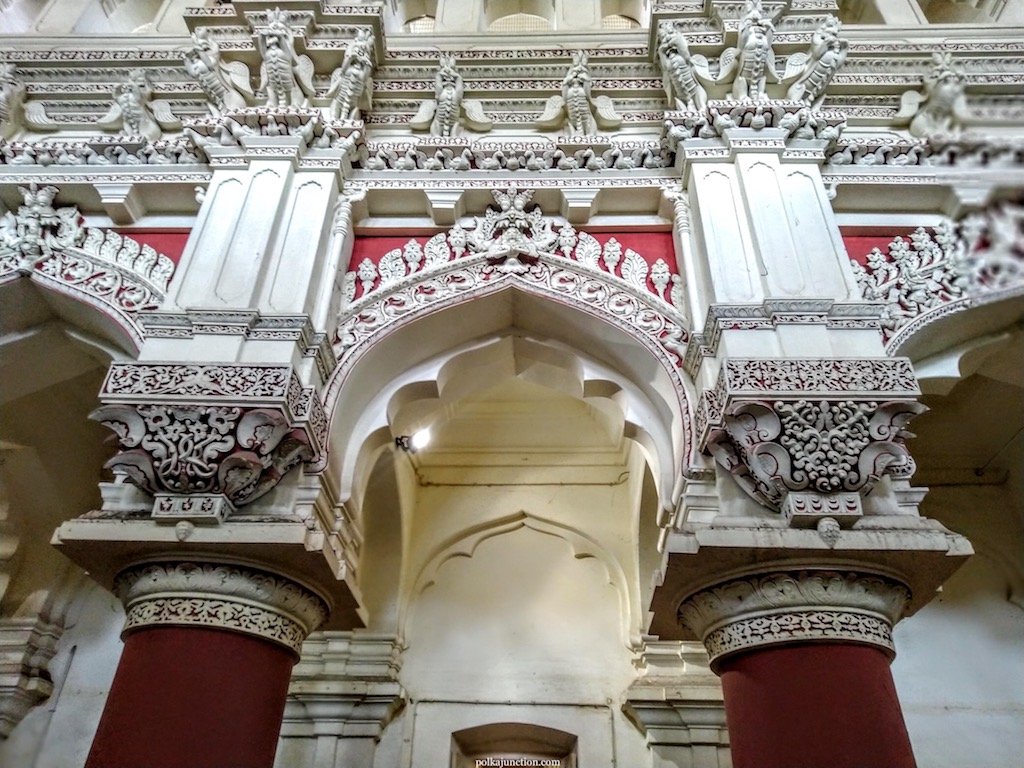 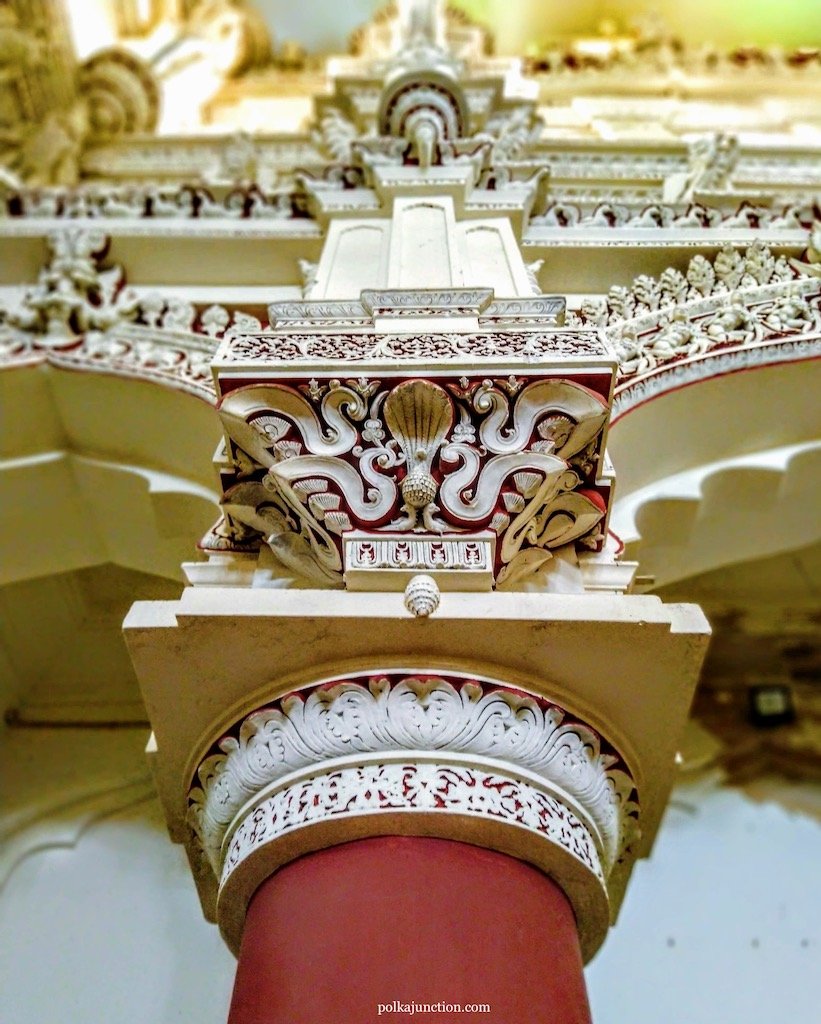 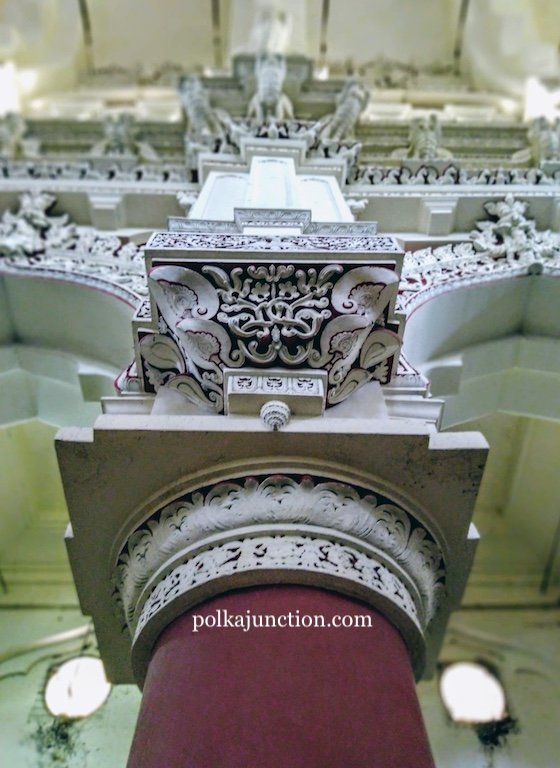 In my honest opinion, the museum is ill-maintained although the collection is simple and of great cultural and historical importance. It has a modest collection of sculptures and idols, some even more than 1000-years-old. However, what is appalling is that the information stickers are torn and the authorities have not cared to replace them. Some of the exhibits are in dark as the bulb inside the enclosure is not functional and has not been replaced for aeons.

The highlight of the museum has to be its decor, the antique sculptures, manuscripts, old photographs of the Thirumalai Nayak palace and the various paintings. 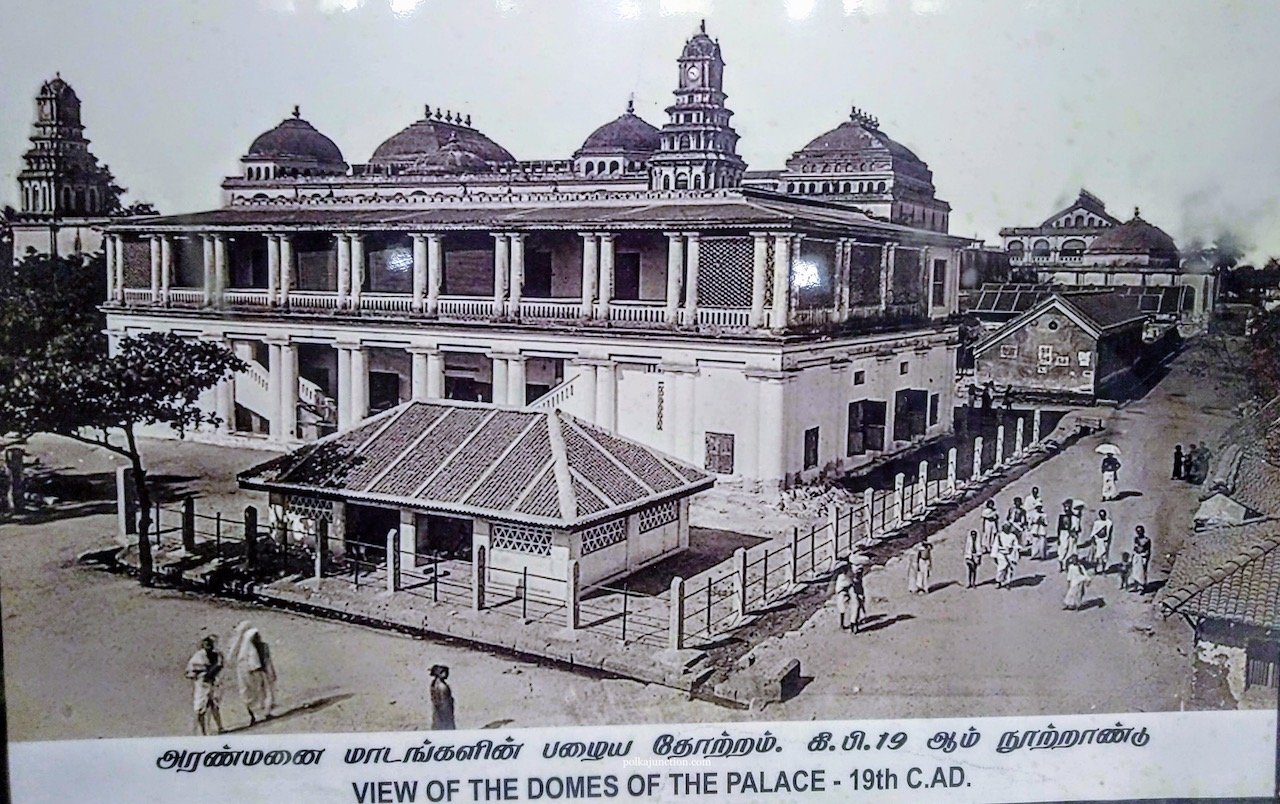 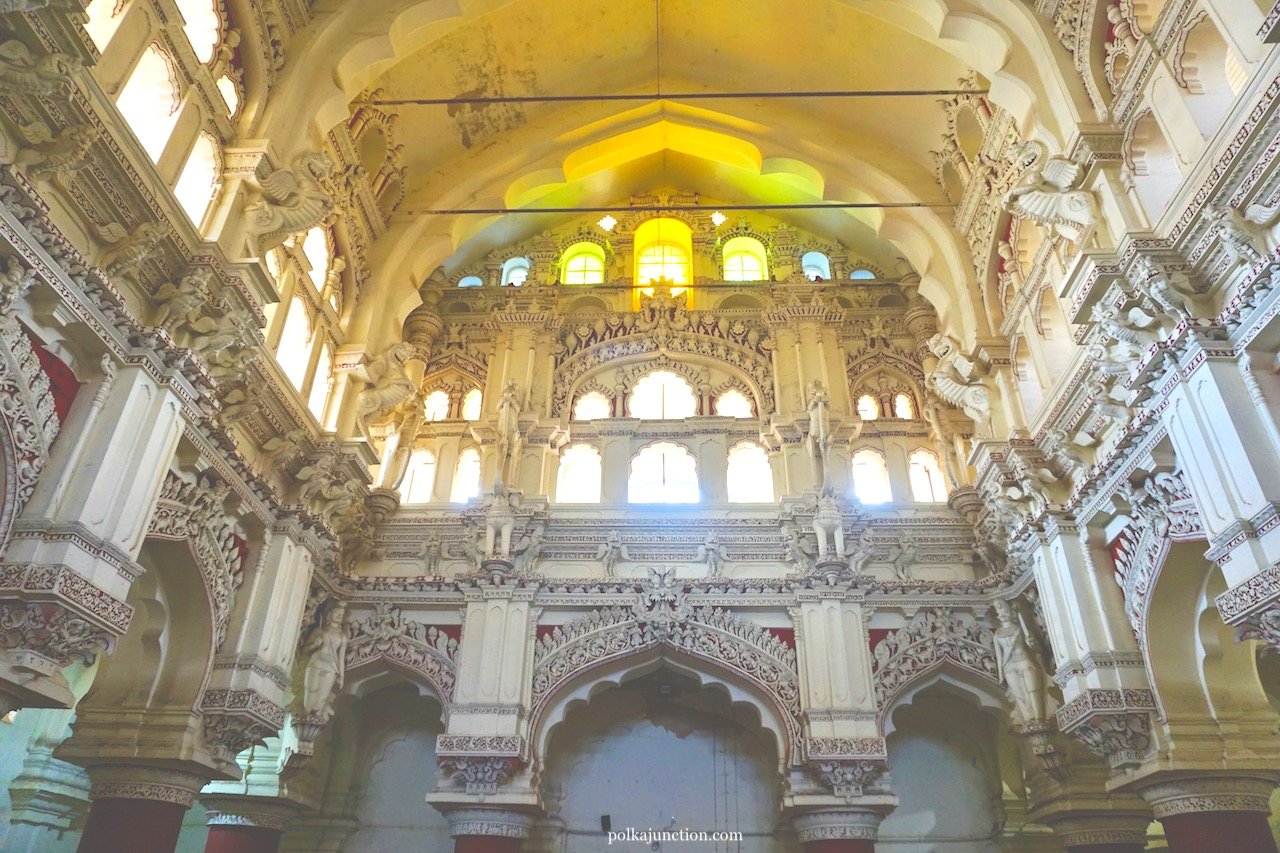 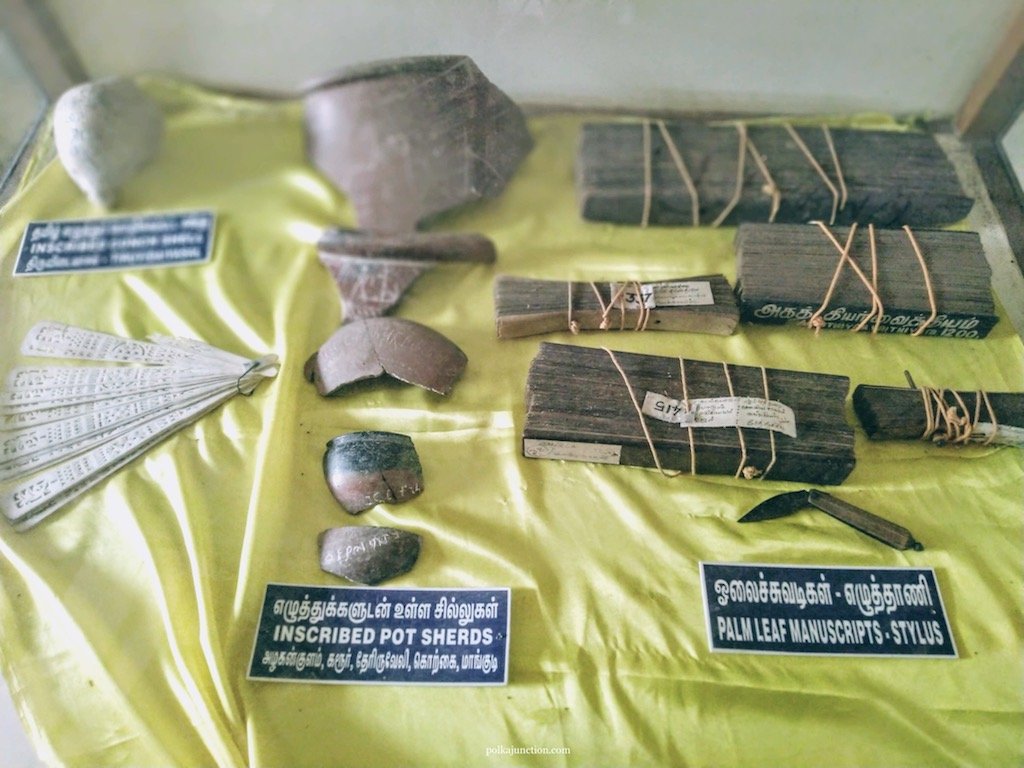 A collection of paintings belonging to various eras -from the cave paintings to the times of Vijayanagar rulers, caught my attention. They bring forth the inevitable and beautiful transition of painting style over the years.

Read about the spectacular UNESCO Heritage site built by the Cholas: Darasuram

I have tried to compare the old photographs of Thirumalai Nayakar Palace with the new views, in an effort to highlight the resources and work that has been inducted into renovating this- once dilapidated palace. 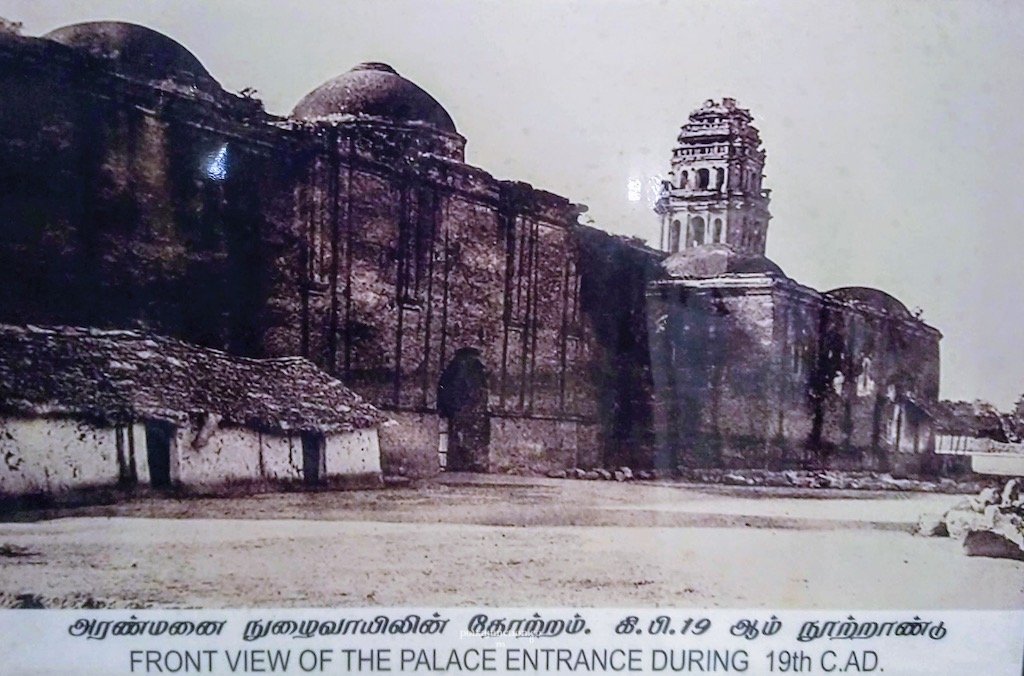 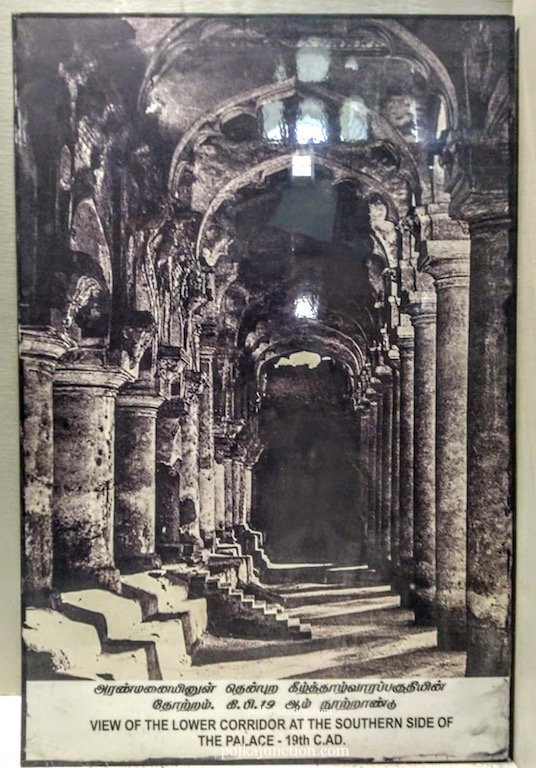 When so much of effort has been put to renovate heritage structures, then why don’t we maintain them in true earnest? I could see scribblings on the walls, on the pillars even on some of the sculptures! Appalling indeed…

The authorities have tried to shoo away foul players who sit on these window sills and scribble away to glory, by topping the sills with pointed structures. But seems like, this hasn’t deterred trouble-makers! I wish to get hold of whoever scribbled this Vijith-Sakthi, someday, and slap them to my satisfaction… (See below). A widespread campaign on ‘Responsible Tourism’ is indeed a need of the hour. 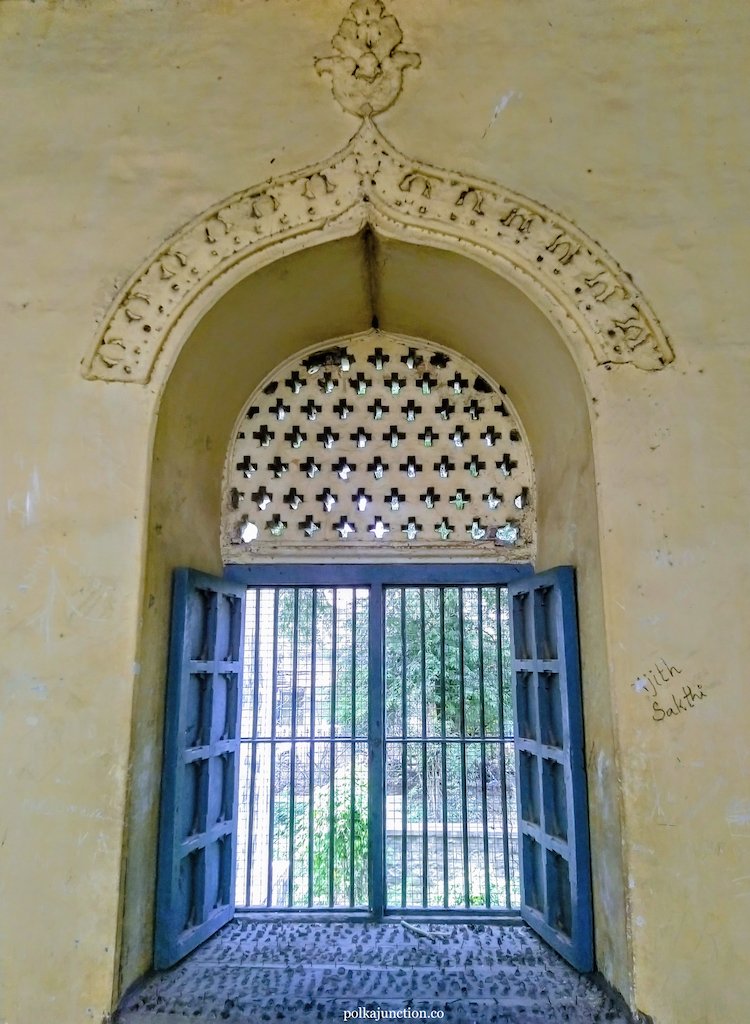 A play of light and shadow imparts an indescribable aura to the interiors of the Madurai Palace. There is beauty in the carvings and stucco work on one hand and a melancholic feel to the vastness, an emptiness that one feels while strolling inside the palace, that I have never felt in any of the palaces in India. 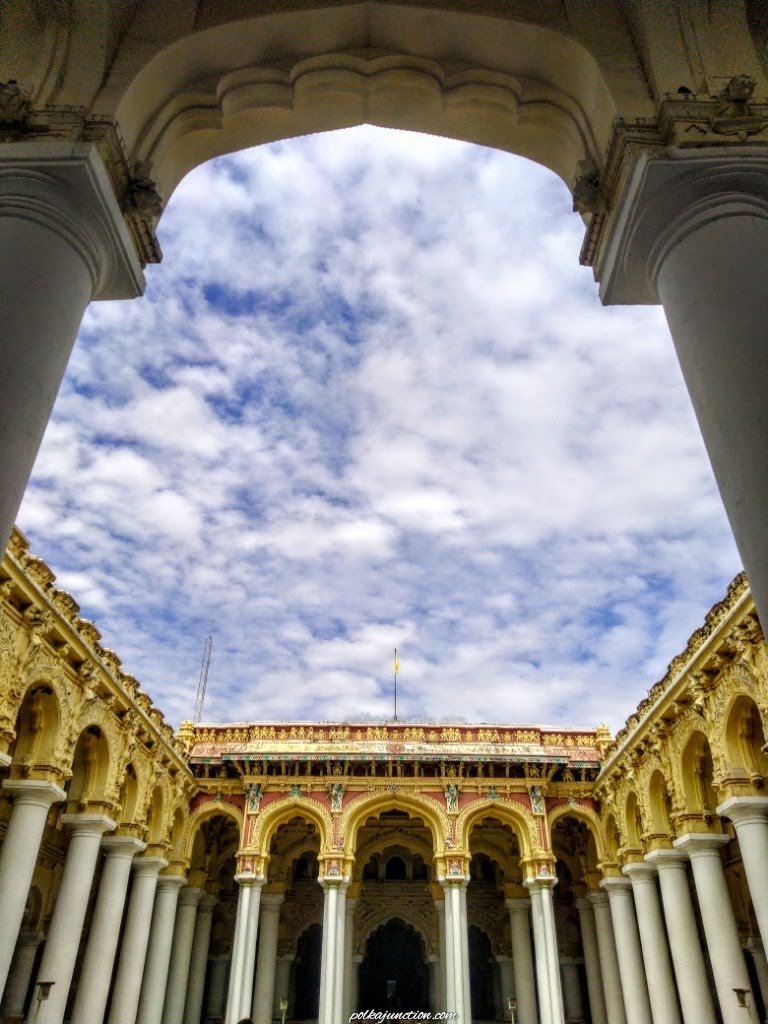 As I leave, I turn back to have a final glimpse of the magnificent Thirumalai Nayakar Palace that stands as a phoenix, resurrected to glory from its dilapidated past. If we as visitors and travellers do not indulge in responsible tourism, such glorious structures will be a thing of the past!

Get to know of the Thirumalai Nayak Palace’s entry fee, timings, and other details.

The details on this board provide sufficient information for visitors.

How to reach Thirumalai Nayakar Palace in Madurai

The palace can be reached within 10 minutes of walk from Meenakshi Amman Temple in Madurai. The temple is as such at a walkable distance from the Madurai Railway Station and the Periyar Bus Terminus.

I hope you enjoyed reading this virtual tour of Madurai’s Thirumalai Nayakar Palace as much as I enjoyed putting this post together, after a memorable visit.

Pin this article for later!

Join our community of readers , responsible travellers and foodies

Know about the curator

Hi
I am Meenakshi and the curator behind PolkaJunction.

I cover cultural and travel stories through architecture, arts, UNESCO heritage, vegetarian food, traditions, and lifestyle, intertwining with some soft adventure and social responsibility. I also love documenting people who are passionate about handicrafts and collect heirlooms.

All our trips were undertaken before March 2020. Since the on-set of the COVID pandemic we haven't travelled, and neither are we intending to travel for the next couple of months until the pandemic subsides. We request you all to adhere to the guidelines issued by the World Health Organization and plan your travels accordingly. Stay home, stay healthy , wear mask and take care.