The Secret of God’s Son is a sequel to the author, Usha Narayanan’s earlier bestseller Pradyumna – The Son of Krishna. And here are my thoughts and review of the same.

Note
I received this book from the author through TheBookClub in return for my honest review. 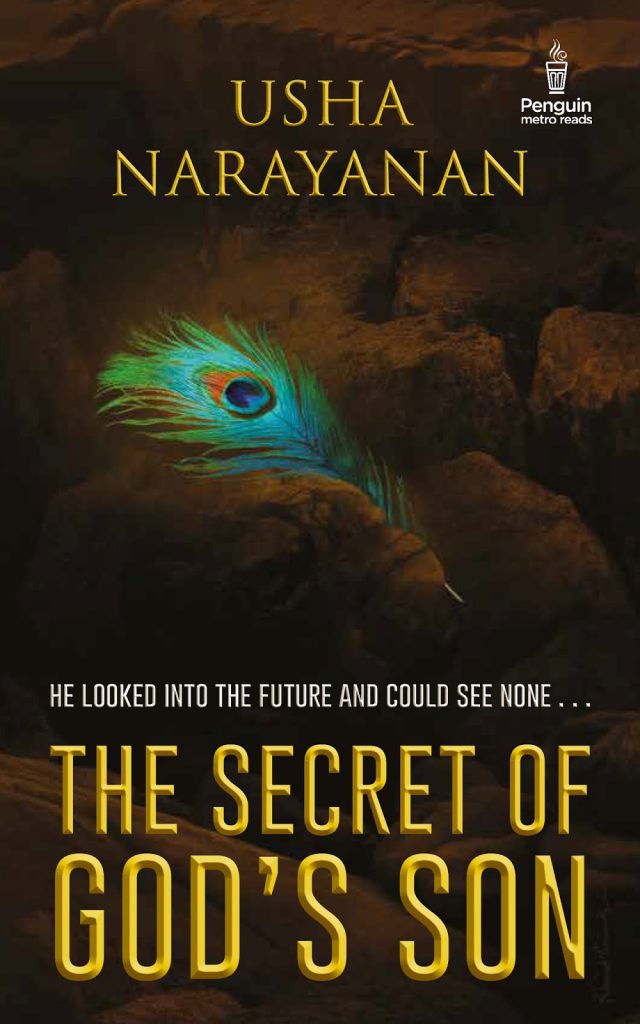 ‘Mahabharata’ has had a major impact on me since childhood, and this fact has been mentioned in my previous reviews as well. So, to accept a copy of the book ‘The Secret of God’s Son’ written by Usha Narayanan, based on the greatest Indian epic, was very natural to me.

Apart from the review of this book, I have also added my own analogy and interpretation of the story in this post…

The book cover acts as a perfect teaser, engulfing in it the secret to be unravelled amidst the pages of the book, by just showcasing a Peacock’s feather.

It’s no brainer for an Indian reader that a peacock feather is synonymous with Lord Krishna. This thus made the title as conspicuous as the cover.

Post-reading, while trying to recollect my thoughts, I felt that the book cover also signalled the eternal existence of Krishna, transcending time, right into the dark ages of the ‘Kali Yug’ and beyond.

With a brilliant illustration of a ‘feather sans a figure‘, the cover has conveyed the story and the glory of Gita, that shall eternally carry on, in spite of Krishna’s absence.

Browse through the blurb of The Secret of God’s Son

The blurb supports Usha Narayanan’s book cover with these lines:

The seas will devour the glorious city of Dwaraka.

People will forget your name and your Gita!

May the world perish!

May the world perish!’

With this cruel curse on Krishna, Queen Gandhari plunges mankind into the unspeakable evil of the Kali Yuga.

It is up to Pradyumna to try and reverse the dire prediction. He must journey into terrifying realms, confront Yama and Shiva, and vanquish the Kali demon. And to do so, he must shed all that holds a mortal back–his arrogance, his fears, his baser instincts– and lead his people out of the swirling vortex of greed, disease, and misery.

Unbeknownst to him, and there is one powerful weapon still, one that could bring victory within his grasp — the secret surrounding his origin. Will he uncover it in time to fight off the cataclysm?

In the answer to this question lies the destiny of all humanity!

The language used by Usha Narayanan in the book, The Secret of God’s Son, is simple and lucid, yet poetic.

Be it the battle description scenes, conversations between Pradyumna and other characters, or the monologues of ‘Pradyumna’; the language used by Usha Narayanan brings out the imagery, beautifully and distinctly.

One is often transported to a bygone era as if witnessing the scenes in person while reading the book.

The narrative technique employed by Usha Narayanan is befitting of an epic, which usually uses the nested frame of storytelling, encompassing a story inside a story or multiple stories.

I strongly believe that this technique makes a book all the more intriguing and interesting. Though, while employing this technique, modern writers often grapple with multiple characters, I see that Ms.Usha Narayanan has sailed through the storytelling with ease.

Whenever a character is introduced or spoken about, the writer has dutifully given the back-story of that particular character. Thus, making sure the reader is not caught unawares.

The Story of The Secret of God’s Son

As far as the story is concerned, I don’t remember reading a book based on Mahabharata, that talks about Pradyumna’s efforts to save his clan ( pardon my ignorance!).

In most versions of Mahabharata and stories surrounding the epic, it’s always mentioned that Pradyumna met his final moments at Prabhasa and nothing more is added to back this up.

So, to read a different perspective of the post-war story in The Secret of God’s Son, was in itself encouraging and refreshing.

Usha Narayanan gives a kickstart to the story of The Secret of God’s Son, by enlightening readers about the triggers of the Kurukshetra war, the happenings on the battlefield, and, post-war scenario, in the initial chapters of the book.

Then, she wades towards the characterization of Pradyumna: who gets to meet Yama and wins over him; gets to meet Shiva-triumphs over him all the while seeking ways to protect the future of his clan as well as to preserve the ‘Celestial Song’.

Pradyumna also stumbles upon secrets connected to his existence and his past, while on his quest to a solution. These events definitely help the story to move forward.

The writer, Ms. Usha Narayanan, has to be appreciated for not tampering with an epic like ‘Mahabharata’. Although, she has added a twist to the tale, but makes this story very much plausible.

The best aspect of the characterization in The Secret of God’s Son is — even though one gets to read about a lot of Gods and Goddesses in the book, a realization pervades that they too display human traits.

Fear, aspirations, insecurity, and vulnerability is an innate quality of all. This reassures readers that if the immortals can face testing times, we are after all mere mortals!

We too need to pursue this journey called life with positiveness and win over the obstacles. Thus, the book through the words of Usha Narayanan elevates the reader to a level, where he or she is compelled to ponder and understand the true meaning of ‘Karma’ and ‘Dharma’.

The literary devices used by Usha Narayanan in the form of metaphors, similes, and monologues that stood out for me, in the book, The Secret of God’s Son, are as follows:

“We are bound by our destiny, living out our lives inside a circle formed by a snake holding its tail in its mouth”

“Always at odds with her situation.Always unhappy”

Role of women in The Secret of God’s Son

Another interesting aspect of Usha Narayanan’s writing is the role of women in her stories.

She has re-emphasized the importance of women’s existence in this universe through very strong characters of Maya, Gandhari, Kaali, Rukmini et.al.

Some of the punch lines like below used by Usha Narayanan, lash out the patriarchal society, questions it, and sends a strong message to both men and women.

” Men tend to regard us as natural victims and use us as pawns to satisfy their greed and lust, or to vent their malice and impotence…However, we are equally at fault, having stayed silent for too long and allowing ourselves to be sacrificed to men’s whims, desires, and dreams of greatness”

“Women are central to dharma…..They are molested and brutalised and their children slaughtered befit their very eyes. If somehow they survive, they are carried off as plunder, to be used as slaves”

While reading the story of The Secret of God’s Son, I was repeatedly reminded of the lines from ‘Mahabharata’:

Many of the characters introduced by Usha Narayanan are close manifestation and personification of our own virtues and bad qualities.

If I had to draw an analogy between the story and today’s situation in India, then it has to be based on Pradhyumna and Samba — both born of the same father, yet, as different as chalk and cheese.

Isn’t this very similar to India and Pakistan born out of the same mother ‘Bharatam’?

And, like Samba who breeds evil and supports Kali, a section of Pakistan has been supporting Kali in the form of ‘terrorism’ that is slowly destroying our world. Now, what has to be done about this Samba and Kali? Well, do read the book to form a conclusion!

Yes, some of you may find a couple of chapters in the book preachy or repetitive. However, I suggest you read through them to understand the essence of this new perspective on ‘Gita’, and especially, the last chapter, that should not be missed.

Of course, while reading The Secret of God’s Son, do overlook some printing errors which I so wished did not exist in the book.

Like the Bhagavad Gita that has a message hidden in it for all times, for all situations, for people of every profession transcending ages, The Secret of God’s Son, too has got numerous messages hidden in it — to parents who bring up their sons with a patriarchal mindset, about the evils of alcohol, lust, greed, and moral values in general.

The Secret of God’s Son could very well be termed as Part-II of ‘Kurukshetra War’ with its own ‘Gita 2.0’. Only that, this time around, the second version of the Gita is being rendered by Pradhyumna upon the onset of Kali Yug.

So, grab a copy of this book called The Secret of God’s Son, authored by the renowned and affable Usha Narayanan, to read an all refreshing perspective of the Gita, and to know the post-Kurukshetra war happenings.