Water is the elixir of life and there is no denying this. Especially, in a country like India that has been and to an extent is still dependent on the monsoon rains for its water needs.

I am reminded of a shloka on water from Rig Veda :

Meaning:  O Water, because of your presence, the atmosphere is so refreshing, and imparts us with vigour and strength .We revere you who gladdens us by your pure essence.

Water is revered in this ancient land of ours– be it in the form of a river, lake, pond or tank. Our ancestors had understood this and made sure to associate the five elements of nature with gods and goddesses. This way, no one dared to fiddle with the primary sources of water, understood the value of it and also conserved it.

Thus, it is not surprising that most of India’s ancient architectural marvels and splendours, temples and ancient cities are situated on the banks of rivers and are nearby to water bodies. Of course, transportation of water must also have been a hindrance in building these structures thus its proximity to the nearest aqua body. However, we cannot deny that a change in river course has not wiped out entire civilizations. Water was, is and shall be of prime importance and reverence.

From the river-ghats to the temple water tanks to the step-wells of India, each of these precious aqua forms has served as a congregation place for religious practices, soirees, tittle-tattles and everyday needs up until the British intrusion. Most of these water bodies fell into disuse as the Imperials found them unhygienic. Hmmmm…and this ancient Indian civilization survived for thousands of years prior to Colonialism in spite of dwelling around these ‘so-called unhygienic water-bodies’ and drinking from them. Ironical, isn’t it?!!

But glad that most of them are being at least architecturally revived in India.

One such water catchment that has survived the times and has been somewhat restored is the 19th century Sagar Lake in Alwar. The Sagar Lake in Alwar adjoins the architectural beauties of Alwar City Palace and the Moosi Maharani Ki Chhatri.

Here are a few captures of this serene place, exaggeratedly called the Sagar- meaning Sea/Ocean, in Hindi!

An Introspective Photo Tour of Sagar Lake in Alwar 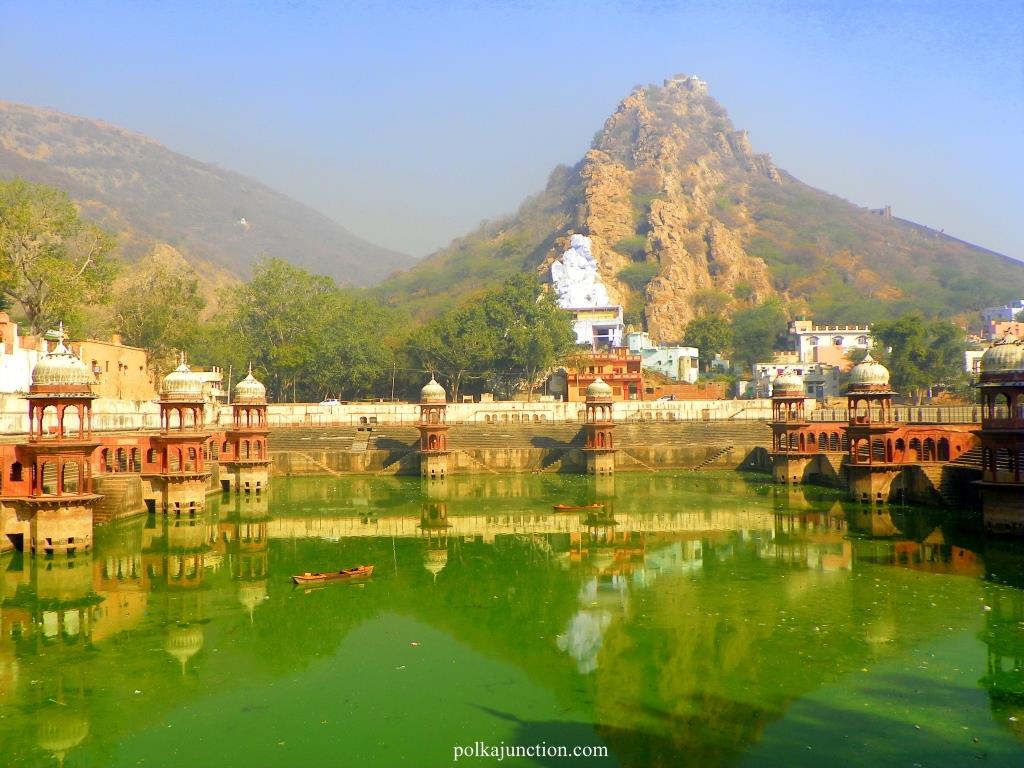 The Sagar in Alwar is believed to have been constructed around the 6th or 7th century and then renovated again by King Vinay Singh when he ordered the construction of the cenotaph of Moosi Maharani Ki Chhatri and the City Palace around 1815 CE.

Read about the Moosi Maharani Ki Chhatri on the blog 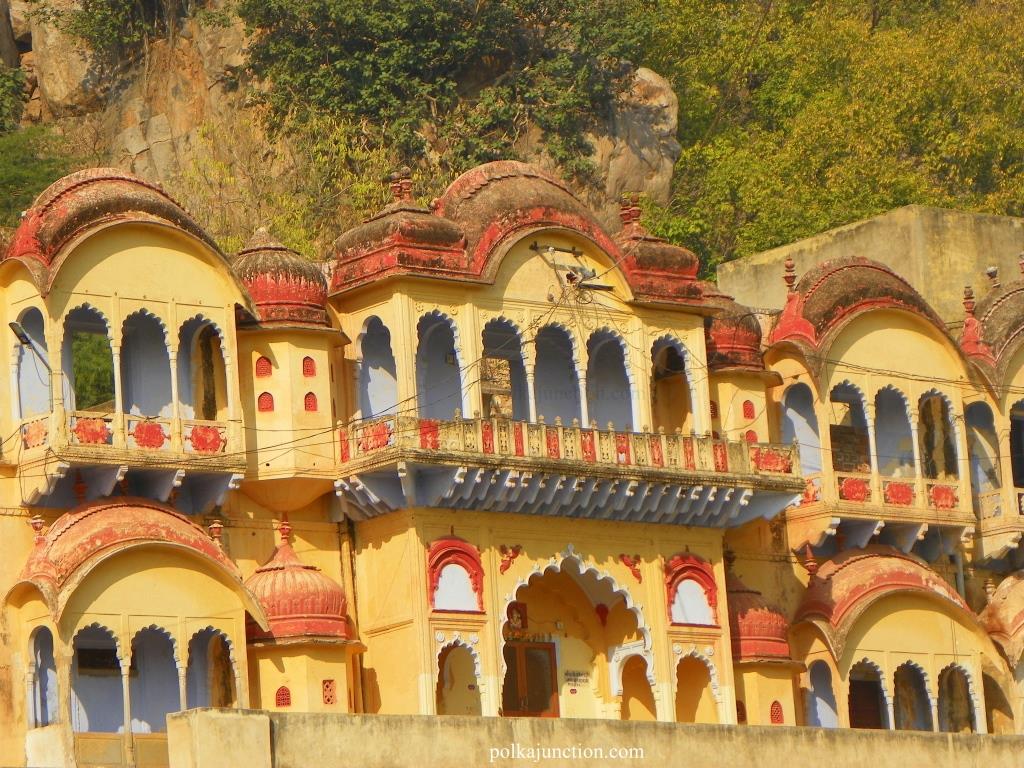 The Sagar Lake in Alwar has rows of temples on two sides, the City Palace on the third-side and the Moosi Maharani Ki Chhatri on the fourth. Enclosed by architectural structures against the backdrop of the Bala Quila and the Aravallis, it looks picturesque.

With its red-sandstone chattris on its bank protruding horizontally, the reflections of these 12 architectural delights light up the otherwise greenish waters of it while the Sagar stands majestically as a testimony to the changing times. 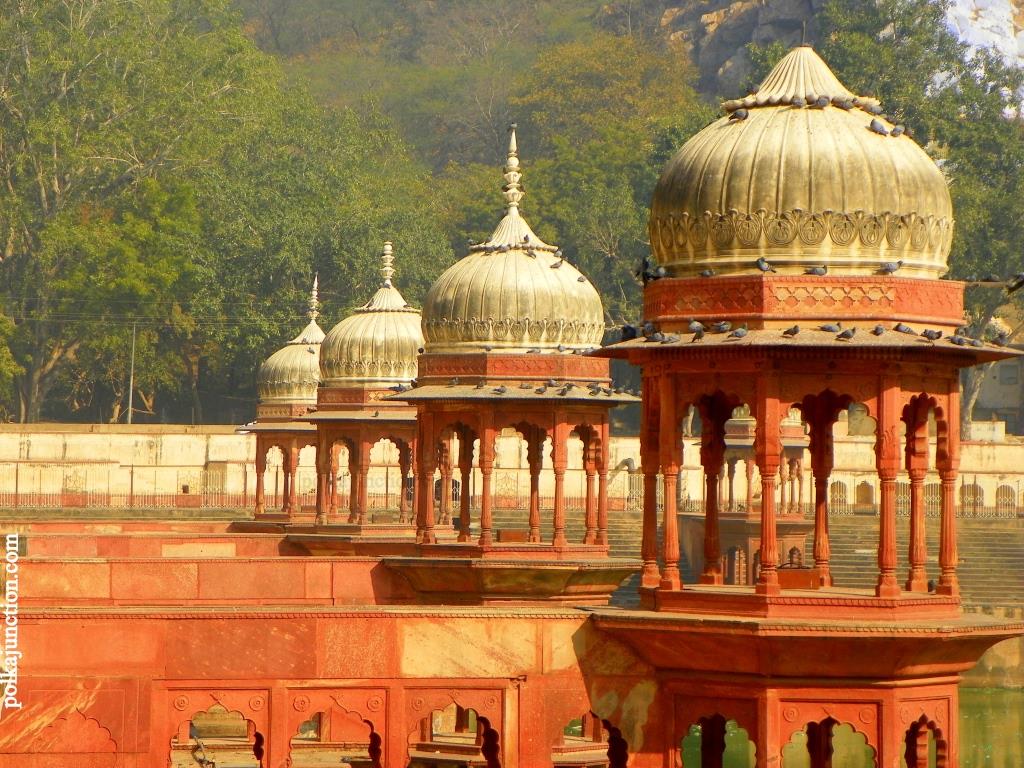 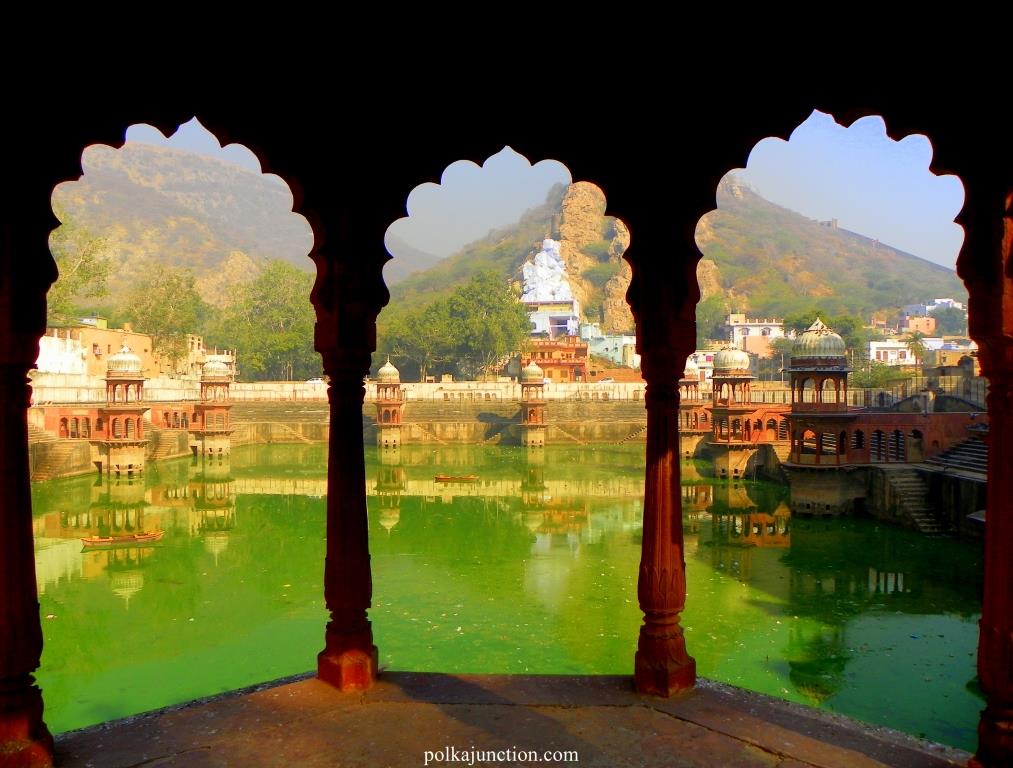 Sagar Lake in Alwar is beautifully green and an absolute treat to the shutterbugs and just that. On close inspection, it is filthy with plastic water bottles strewn over its surface and the water in the catchment stinking at few places. 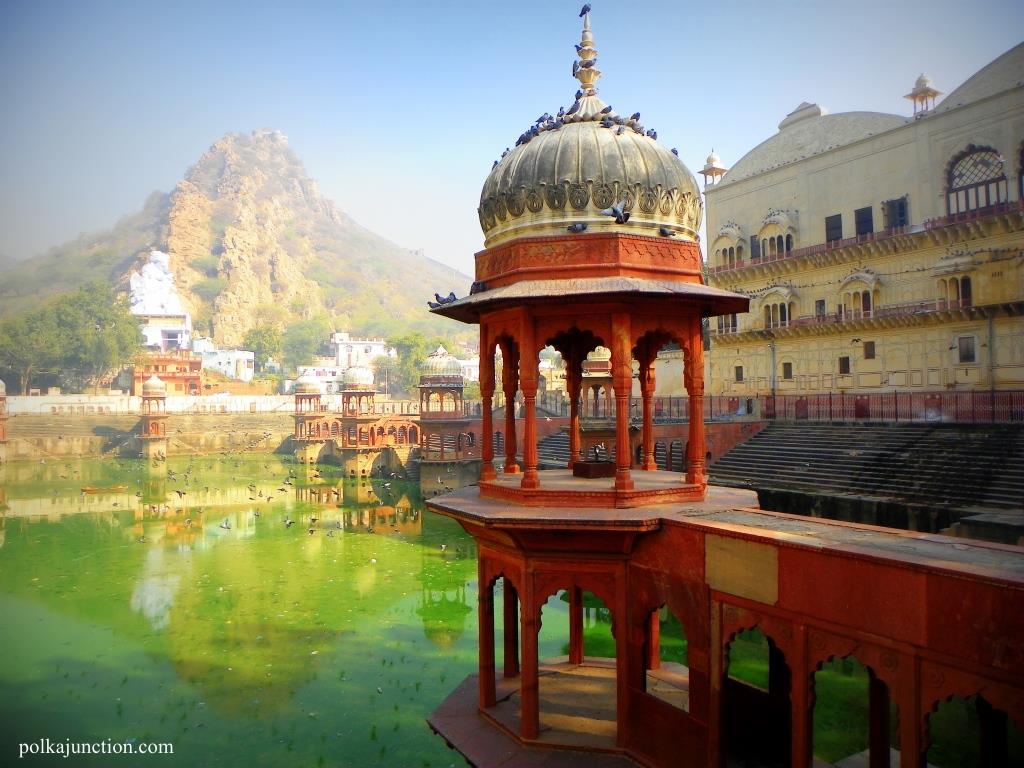 Though unkempt, the Sagar looks charming with the kits of pigeons flying around, some of them perched upon those horizontal steps while some sit in an arrayed fashion on the diagonal steps leading to the lake and others adorn the Jharokas of the Alwar City Palace. 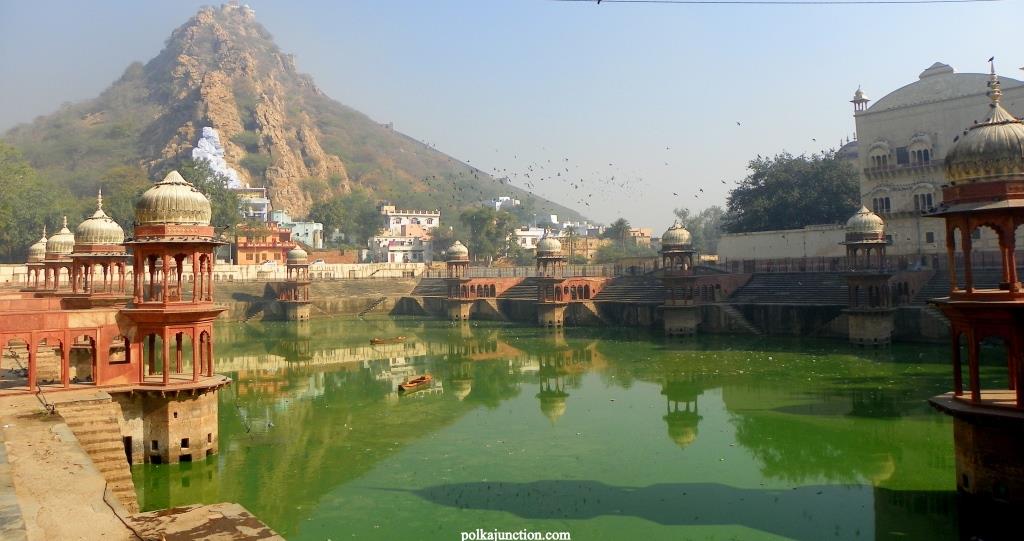 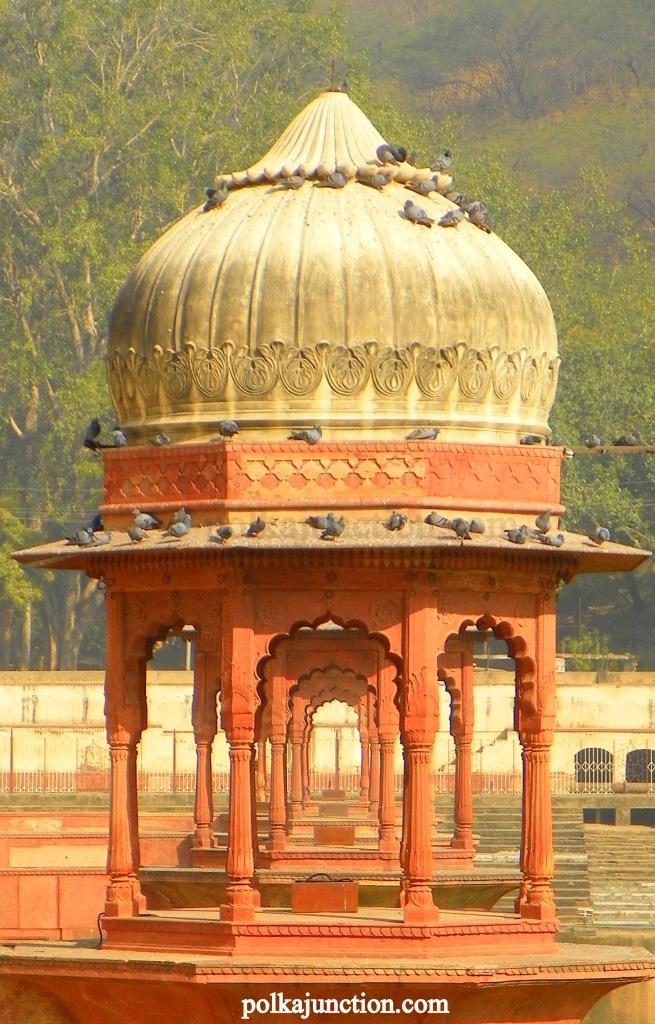 Ignore the hazy greyish canopy of dust that is omnipresent in the skies of Alwar owing to the constant mining in the hills of the Aravallis and you get a beautiful canvas of colours on a bright day. And the Sagar Lake in Alwar looks all the more magnificent from Alwar fort/Bala Quila perched on the ridges of the Aravallis. 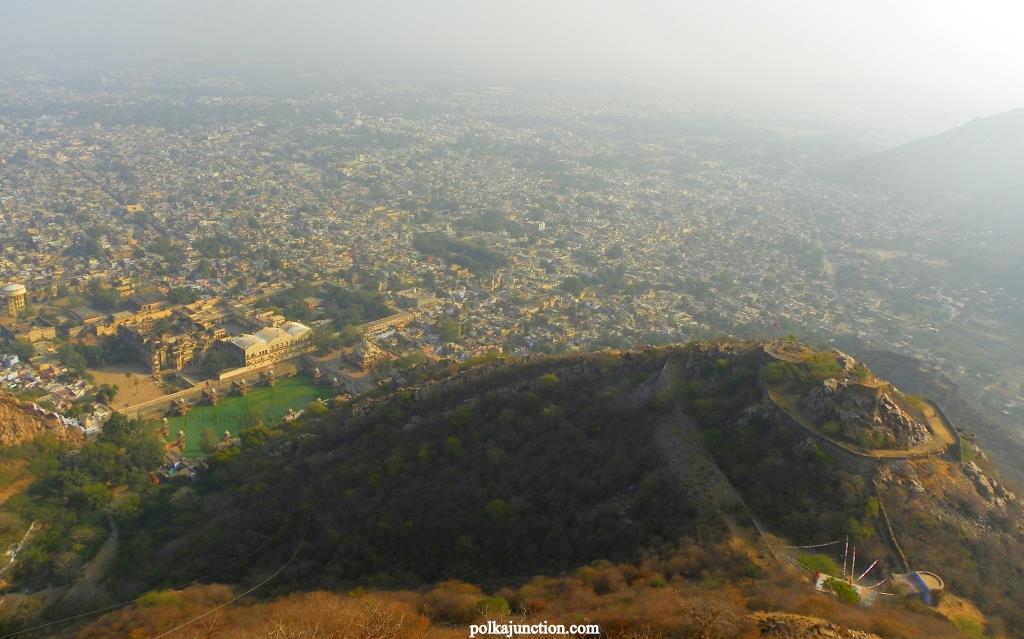 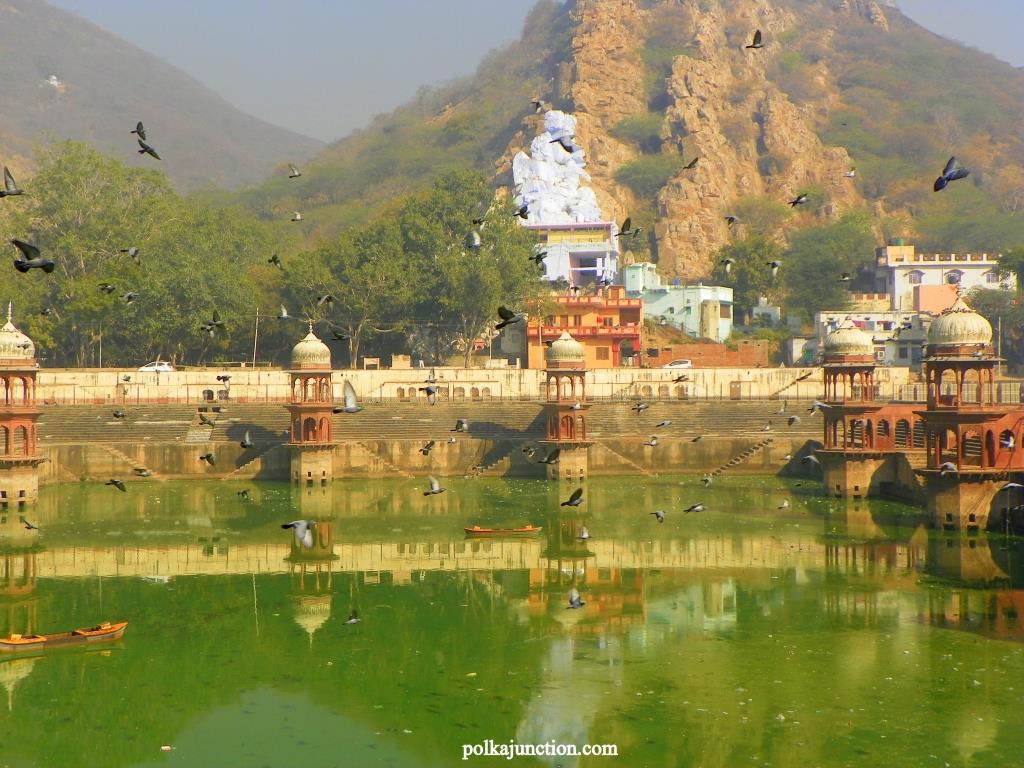 The Sagar Lake in Alwar had seen better times when it comforted the residents as a bathing ghat, quenched the thirst of birds and animals, served as a gathering place for religious ceremonies and royal rendezvous! I am sure, it also must be yearning to get back into its old glorious look and not feel neglected as in present times.

Time to introspect, protect, restore and preserve our glorious monuments.Else, what difference is left between us as Indians and the barbaric invaders who demolished these architectural marvels?

Have you been to a beautiful place/monument that looks neglected? Share your thoughts with me in your comment on this photo-tour.Thank you for reading 🙂

How to Reach Sagar while in Alwar?

There is no entry fee to visit Sagar.

Pay caution as the steps are slippery and are broken at some places. 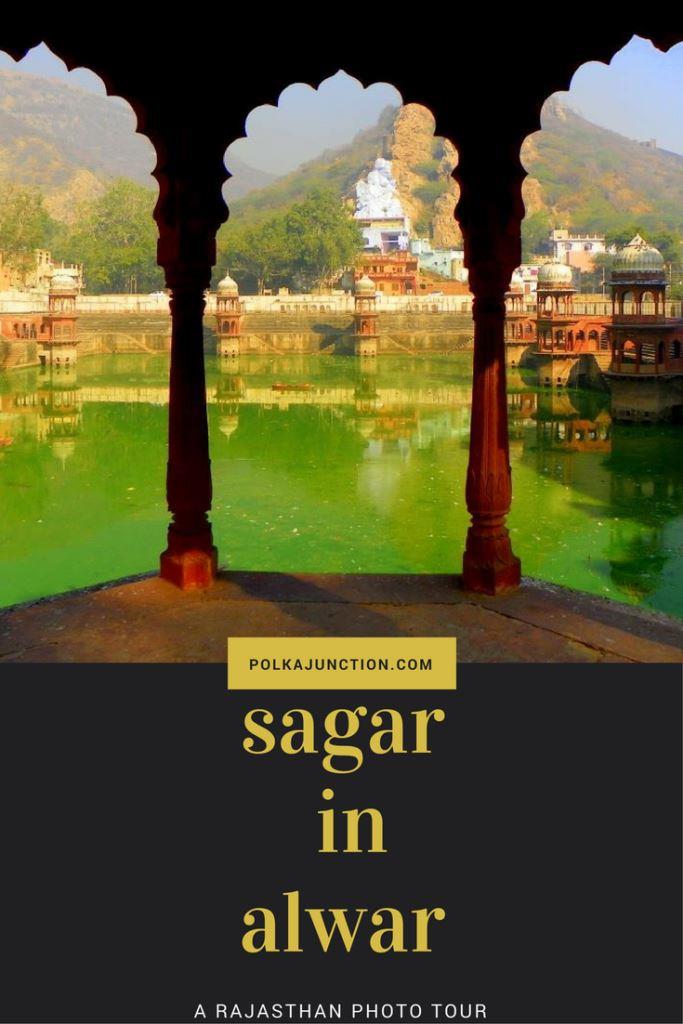 13 thoughts on “Sagar Lake in Alwar – An Introspective Photo Tour”