I was more interested in exploring the temples of Bhangarh, built in the nagara style of architecture, while others were worried about its spookiness. ‘Haunted’, claimed all…‘we could hear weird voices and noises’, said some, while a handful vouched there is really nothing eerie about the place. These were some of the reactions from friends who got to know of our family trip to the most haunted fort in India!

I vividly remember the day of our visit to the Bhangarh Fort, in January, this year. It was unusually sunny and bright for a winter morning in the region of the world’s oldest fold mountains-the the Aravallis. These mountains run diagonally akin to a scar, across the vastness of the desert state of Rajasthan.

Family trip to Bhangarh: The most haunted fort in India

I chose a binge yellow attire that could blind even the most damaging hovering ghosts of the fort. But why?? Well, I had made sure to dress in anything but black and not let my hair open, as, it is widely believed in South-of-India that the colour black and open hair attract spirits. haha…

With a prayer on my lips and a promise that none of us will venture out alone, once, inside the Bhangarh fort, we drove down from Abhaneri through Dausa towards the village of Bhangarh. Though the drive was smooth, strangely, the region around Bhangarh looked very sparsely populated and barren unlike the other villages, en-route. From afar what looked like a forbidden single hill, turned out to be an extension of the Aravalli ridges.

The narrow route leading to Bhangarh can actually make one lose their wits. Not because the stretch is haunted too, but because it is blessed with craters big enough to accommodate a flying saucer! The lane leading to the fort is bumpy and cobbled at many places. There are a couple of tea-stalls on either side and that is all one can find as part of a ‘living’ there. Also, age-old banyan trees with differently shaped hanging roots and branches add an eerie feel to the location of the Bhangarh Fort. 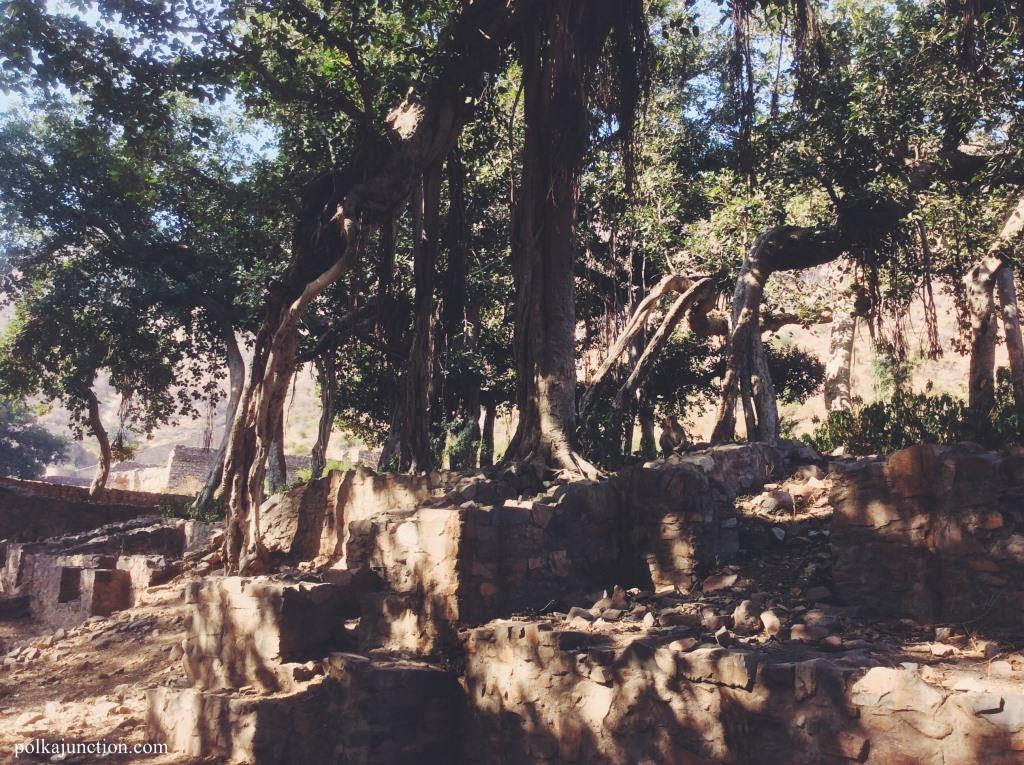 As we parked our car and walked towards the entrance, I saw a couple of tourists carrying away stones from inside the fort. Highly symbolic of their conquest over the haunted fort.Huh?

I find it unfathomable when people carry away these pieces of history as if they own them…Sigh!

Bhangarh fort history as the most haunted fort in India 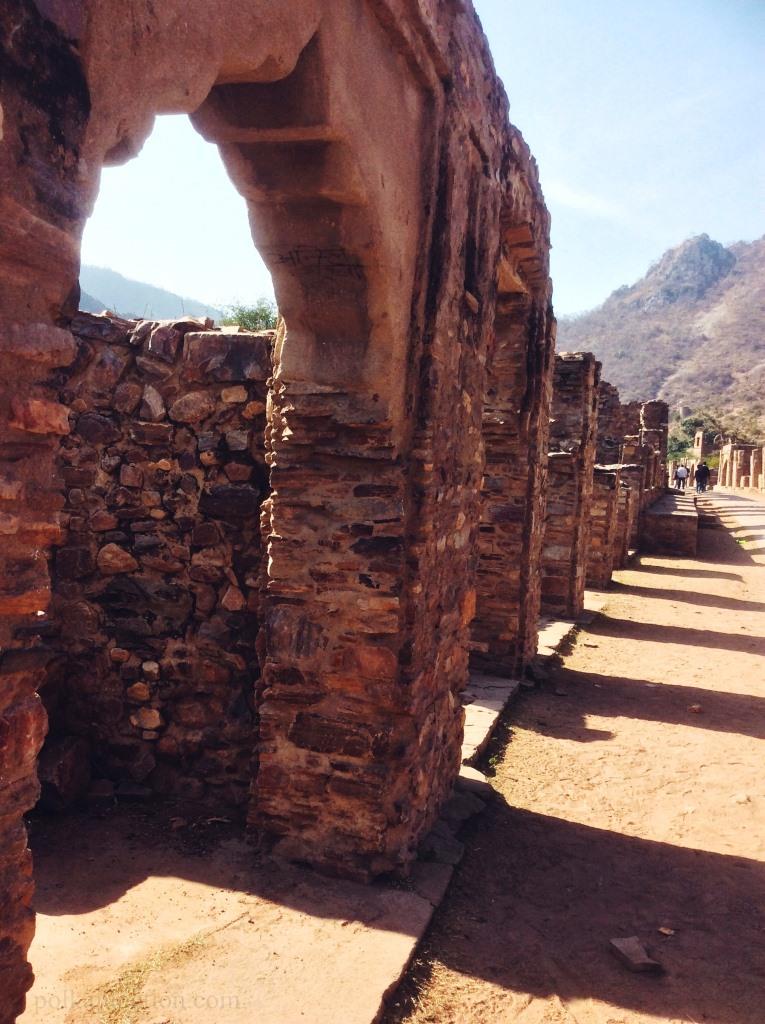 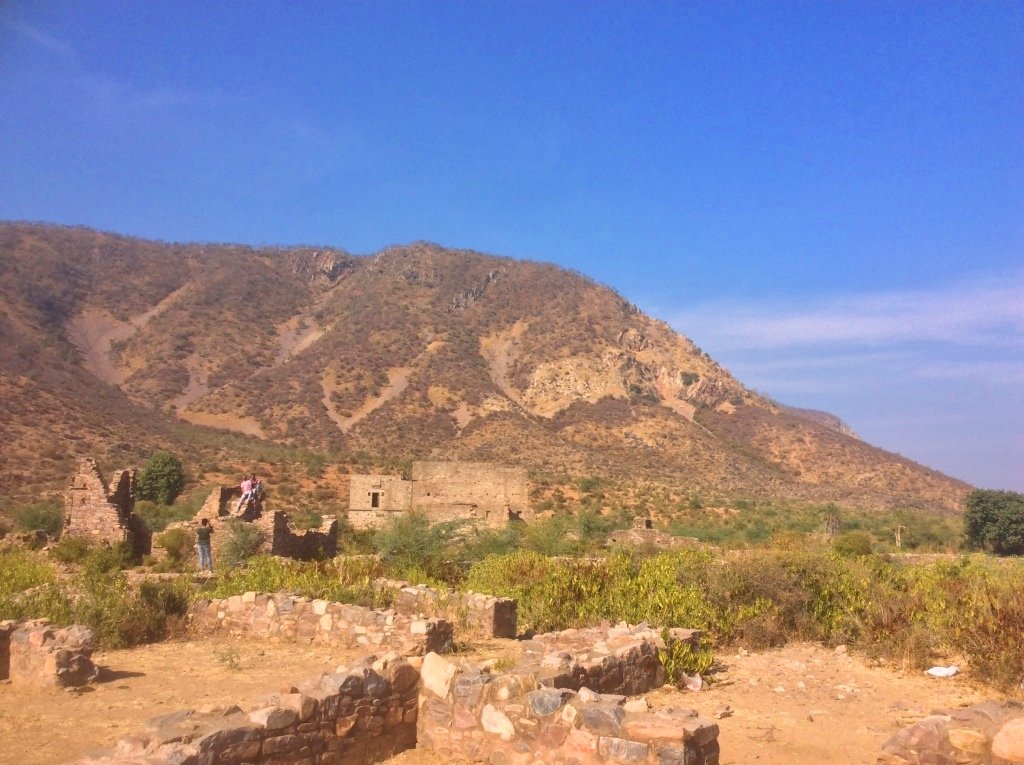 The fort was built by Raja Man Singh for his younger brother Madho Singh. Subsequently, Madho Singh named the premises after his grandfather Bhan Singh.

There are too many stories floating around -on the internet, on news channels, in the villages around Bhangarh about the past and present happenings in Bhangarh Fort. These tales range from a curse of a sadhu to the curse of a magician enchanted by the queen Ratnavati to droughts and famines. However, the viable reason seems to be the drought that could have led to the abandonment of the fort.

But ask any villager there or a guide at the Bhangarh fort and they will quash all this as pure nonsense and made-up stories. Most of the localities do not seem to believe in these fables any longer. Rather many of them are coming back to make a living in the nearby Ajabgarh thus offering the wide potential for the place to be a prime attraction for dark tourism.

Our first impressions of the most haunted fort in India

On my first glimpse of Bhangarh, I was reminded of the Golconda Fort in Hyderabad of yesteryears. Golconda too looked abandoned and desolate without renovation and maintenance, many decades back.

The map of Bhangarh Fort at the entrance is informative enough and can help one meander through the alleys of the fort complex. It gives a fair idea of how the fort complex was well-planned with Havelis, temples, bazaar areas, and various quarters including that of the King and Queen complexes.

Havelis reminds me of the ones in the Shekhawati region. Do read about the lesser-known Havelis of Kajra 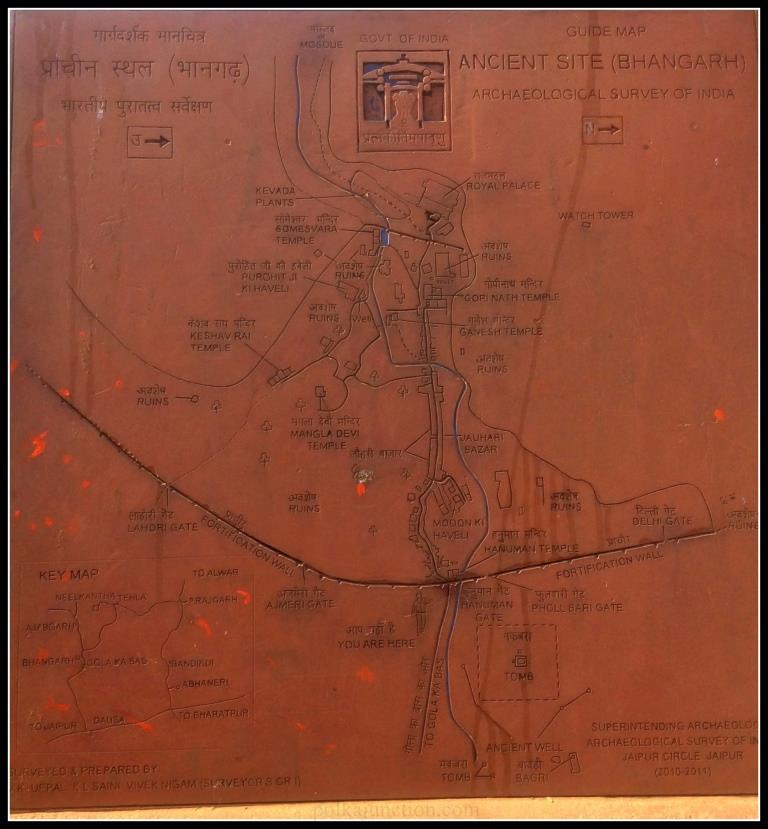 I am not going to discuss at large about the various areas of the Bhangarh fort as all the details are available on the Wikipedia page.

The Jhouri Bazaar does look eerie with its ruins of a once-bustling array of shops. If one observes keenly, you will find that most of these blocks have a staircase cocooned inside, and strangely, none of the topmost floors exists today! The Bazaar area of the Bhangarh Fort is quite vast, branching into narrow alleys further. 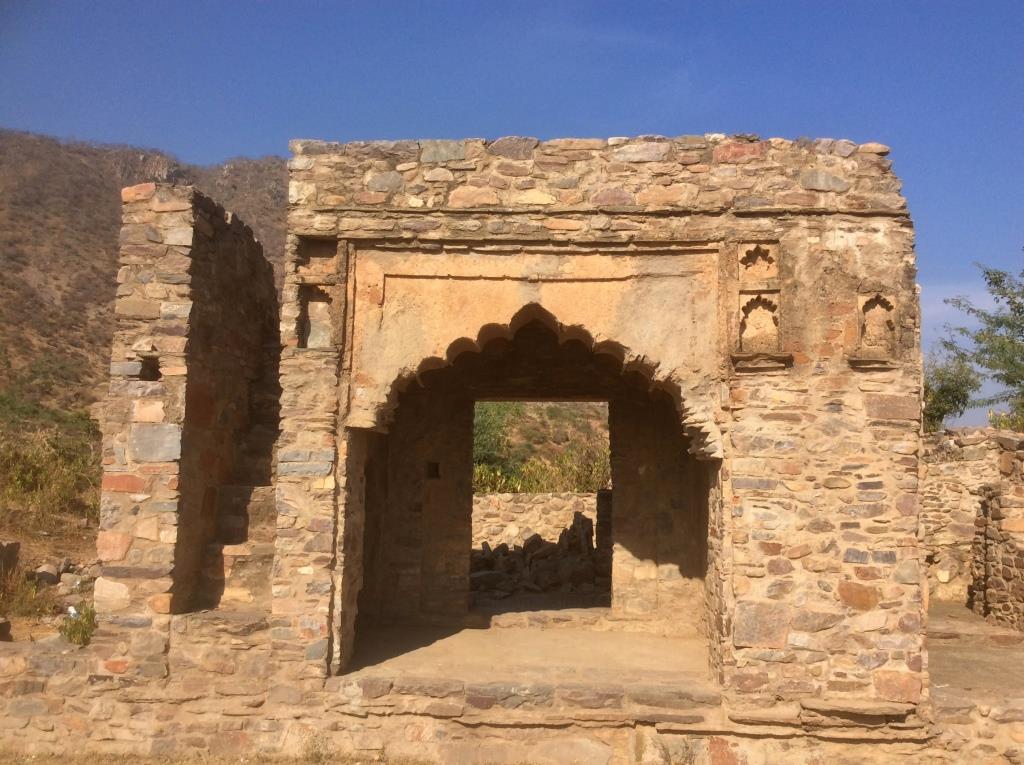 At the fag end of the bazaar is the entrance to the Bhangarh Fort. Upon entering the fort, to the right is the Gopinath Temple that is so splendidly ornate and just a few yards onto the left is the Someshwar Temple with a water tank beside it. 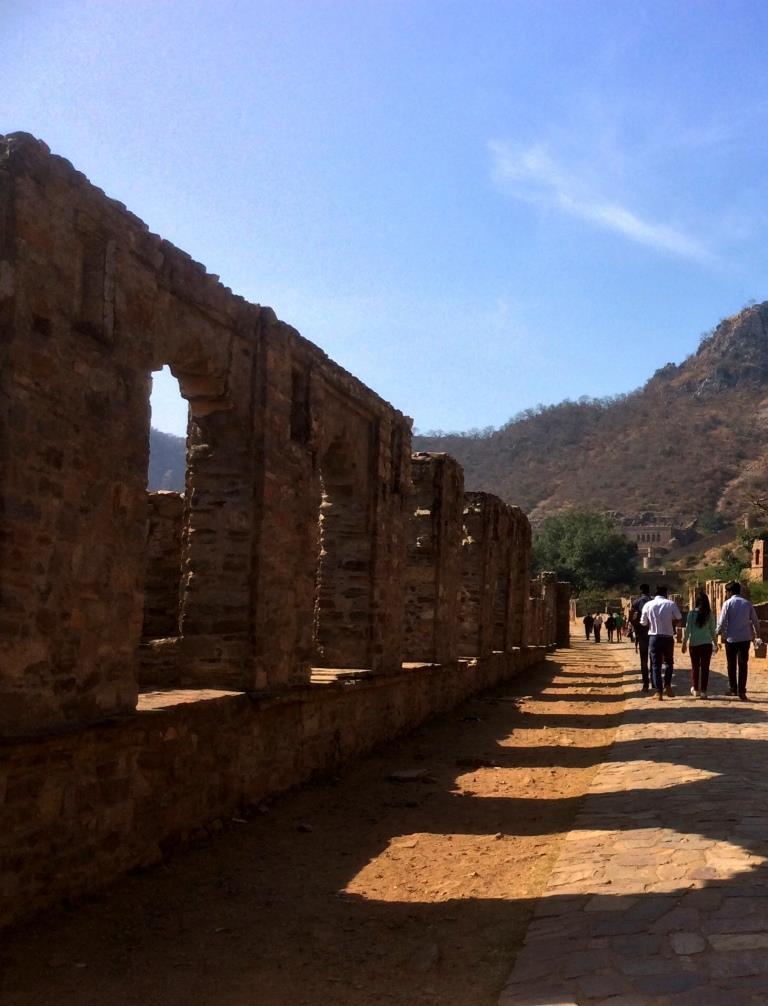 The Someshwar temple built in the nagara style of architecture encloses a Shiv ling in its sanctum. While hovering around the entrance of the temple beside the tank, I could hear the tinkling of anklets. Surprisingly, neither my husband nor my son could hear any and there was no one in the vicinity. I thought I was just hearing things since all of us have been fed with stories of this haunted fort.

The main palace is built uphill and was supposedly a seven-storied structure. Sadly, only three of the seven remain as of now. This complex has to be reached via a ramp that is quite steep. 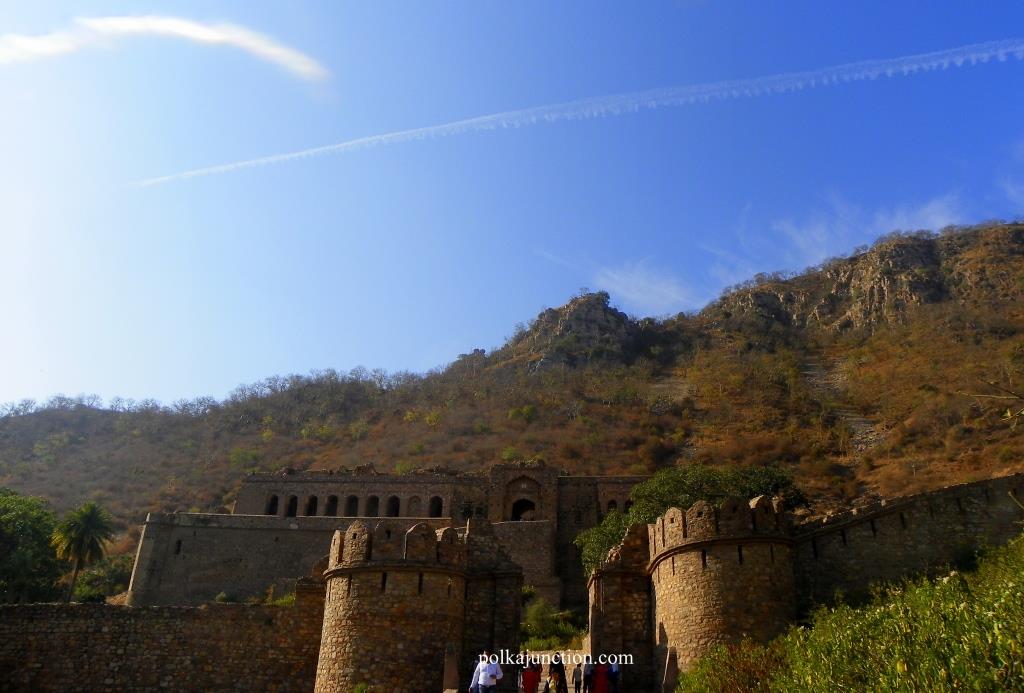 As a pleasant surprise, the lawn that stretches across these two temples is well-manicured and palm trees stand tall and disciplined as if bound by the spell of its master. 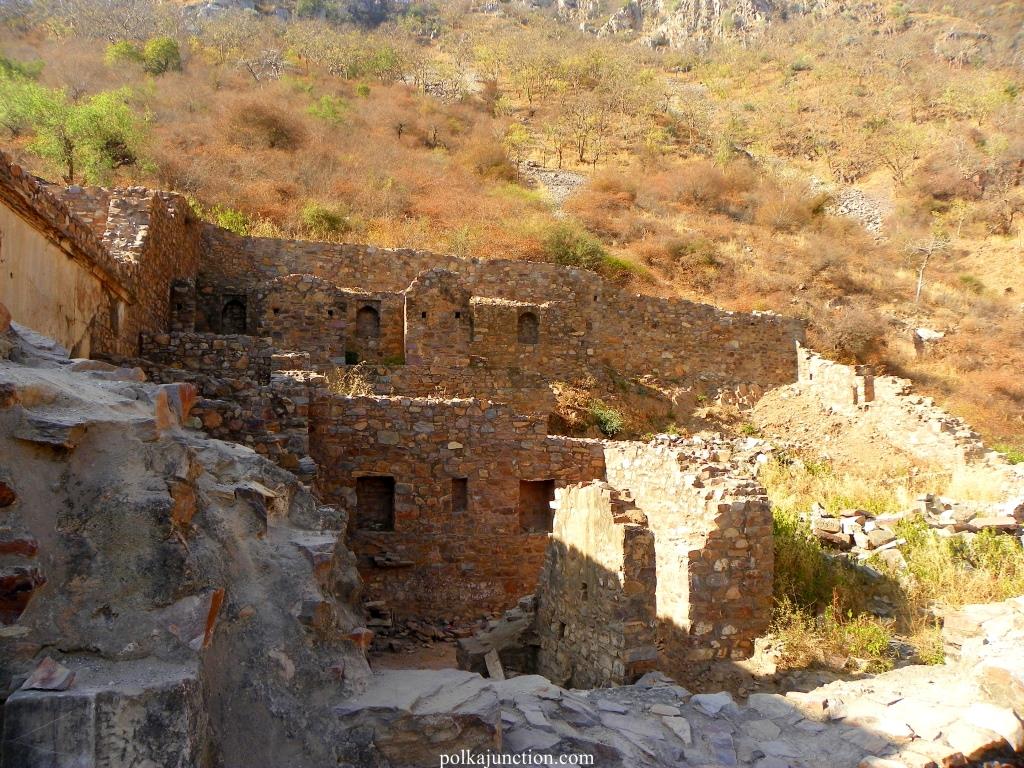 The fortified palace is in a dilapidated state though remnants of a glorious past are still visible. A view from atop the king and queen’s chamber is breathtaking…I am sure if there was Instagram in those days, these views would have trended organically! 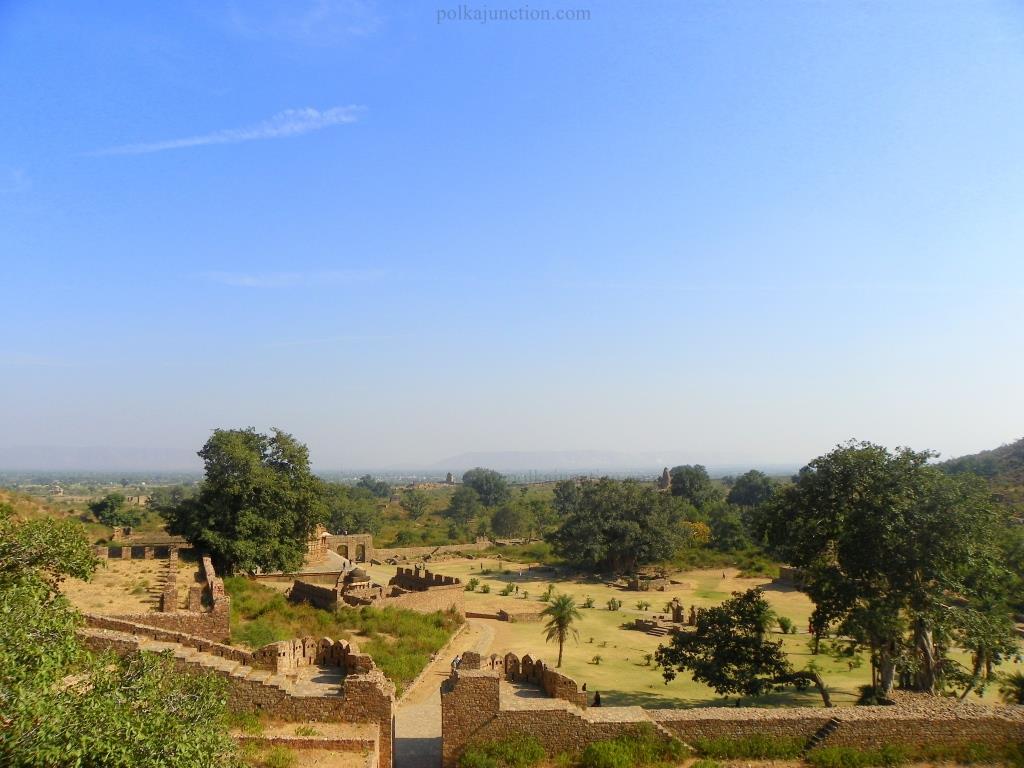 Our guide (supposedly a local and not an authorized guide per se) took a detour as we were returning from the fort. He led us through a narrow path towards a mini-forest. We were taken aback, as this zone was in contrast to the vapid fort area. This part of the Bhangarh fort was lush green with peacocks and birds perching on the branches of ancient trees. 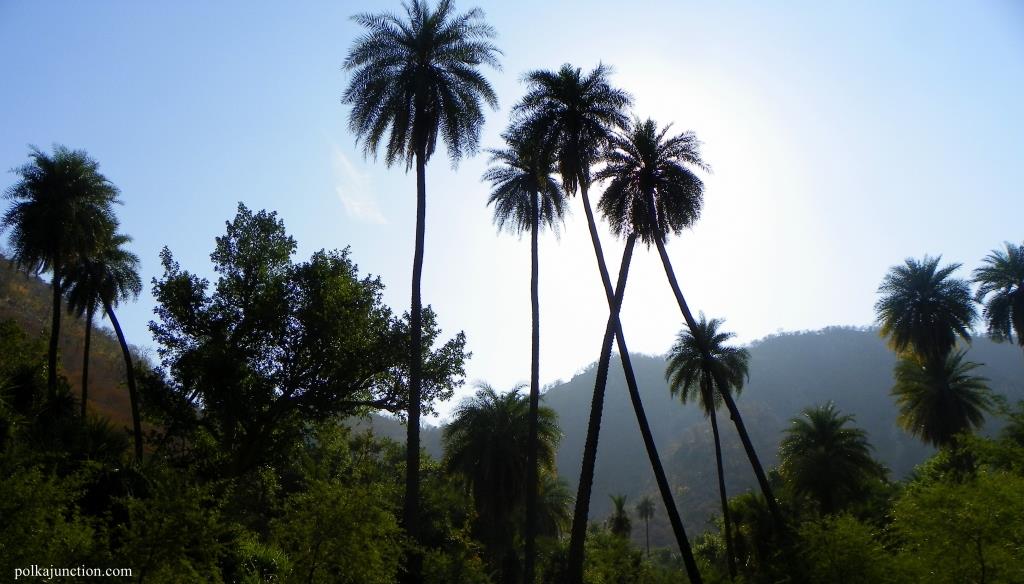 He led us to the roots of a tree that supposedly houses a natural spring at its tips. The water that oozes out from here is supposedly a source for the aqua supply inside Bhangarh fort tanks, he claimed. 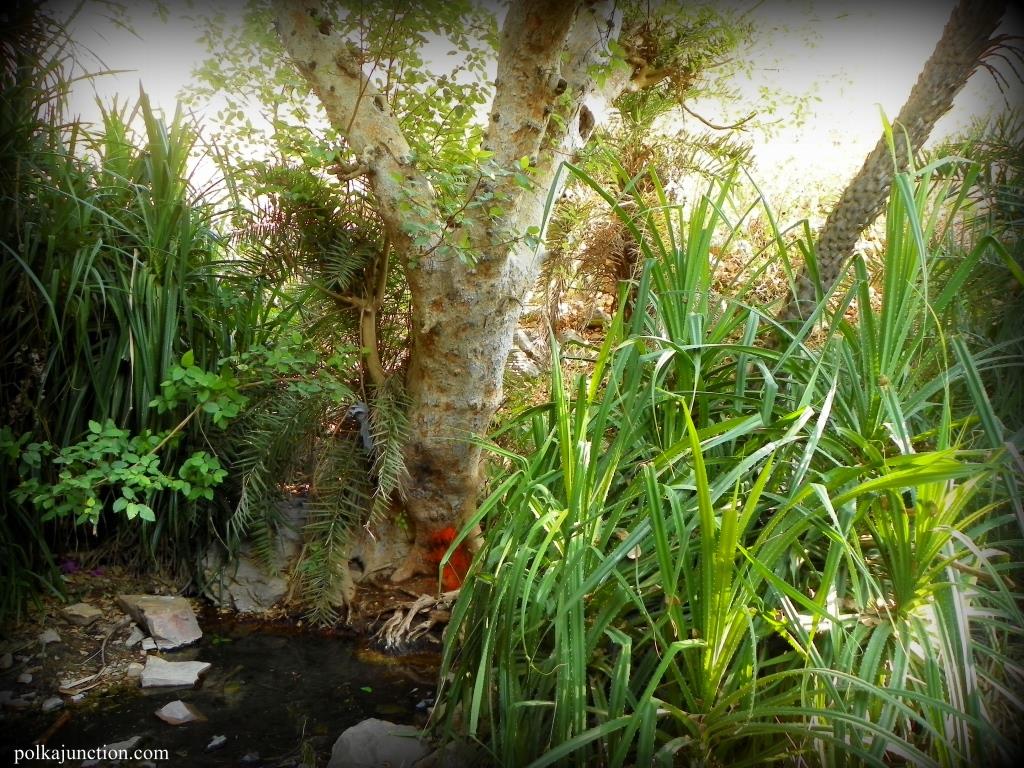 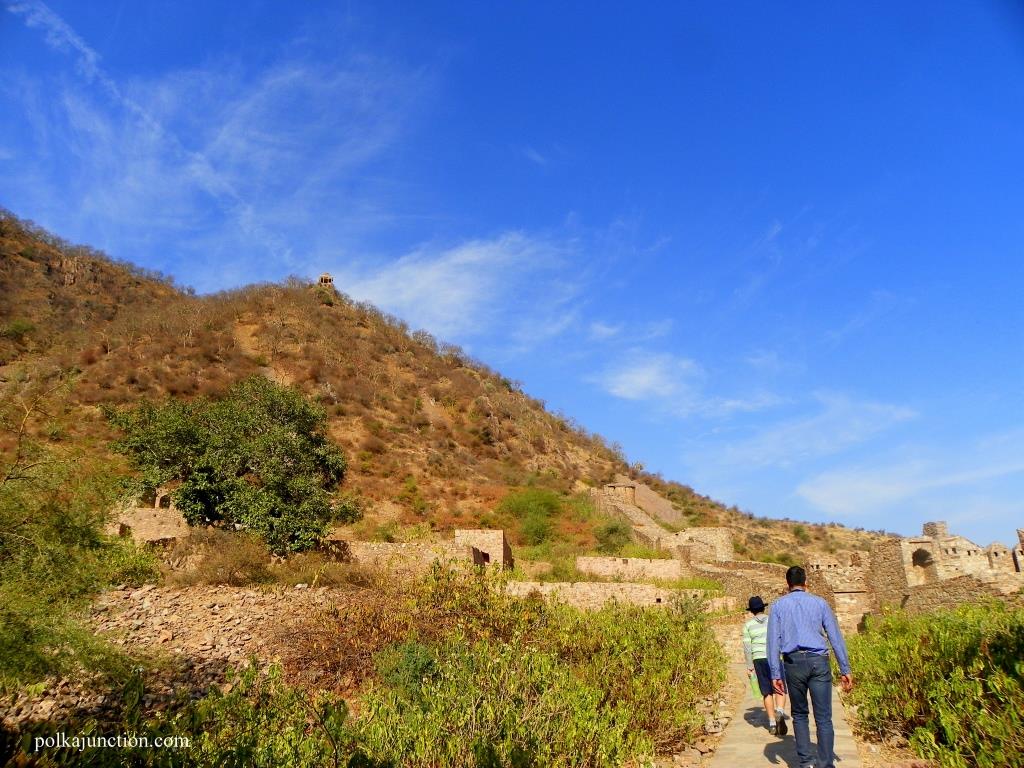 It sounded both believable and unbelievable. The whole of Bhangarh looks strangely dry and drought-prone but just in this zone, there is an uninterrupted flow of water. None can believe that such greenery exists amidst this deserted area, especially in winters. It indeed looks like an oasis in the midst of a desert. 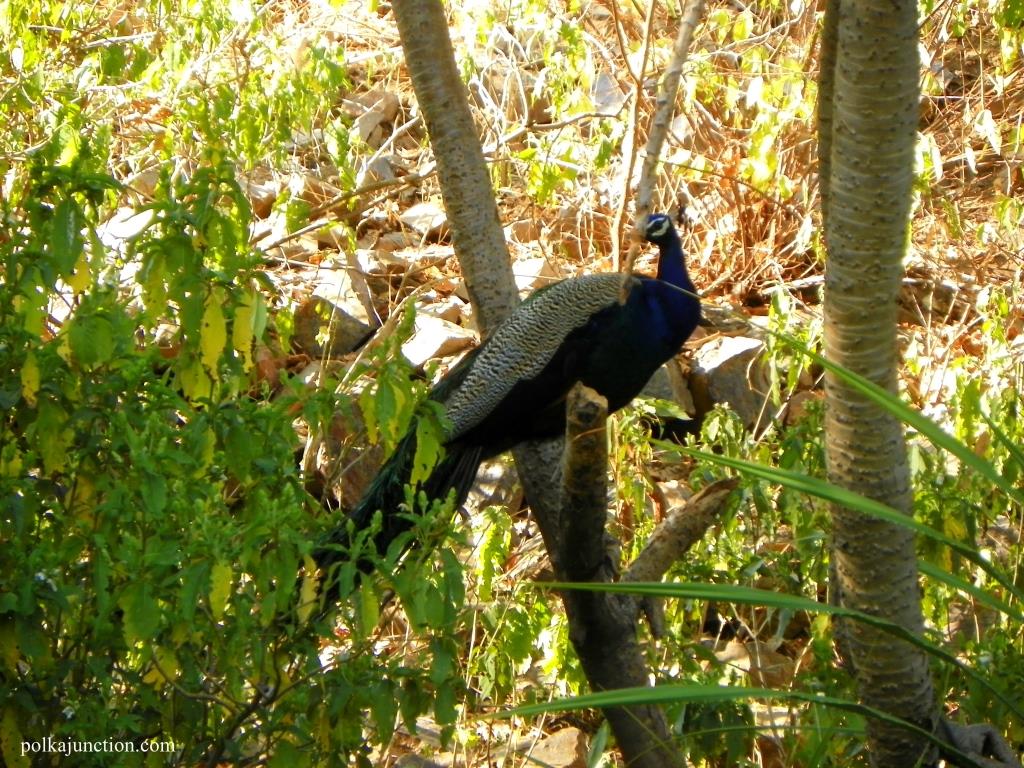 But then, these mountains are lush with vegetation during the monsoons and impart an altogether breathtakingly different view. 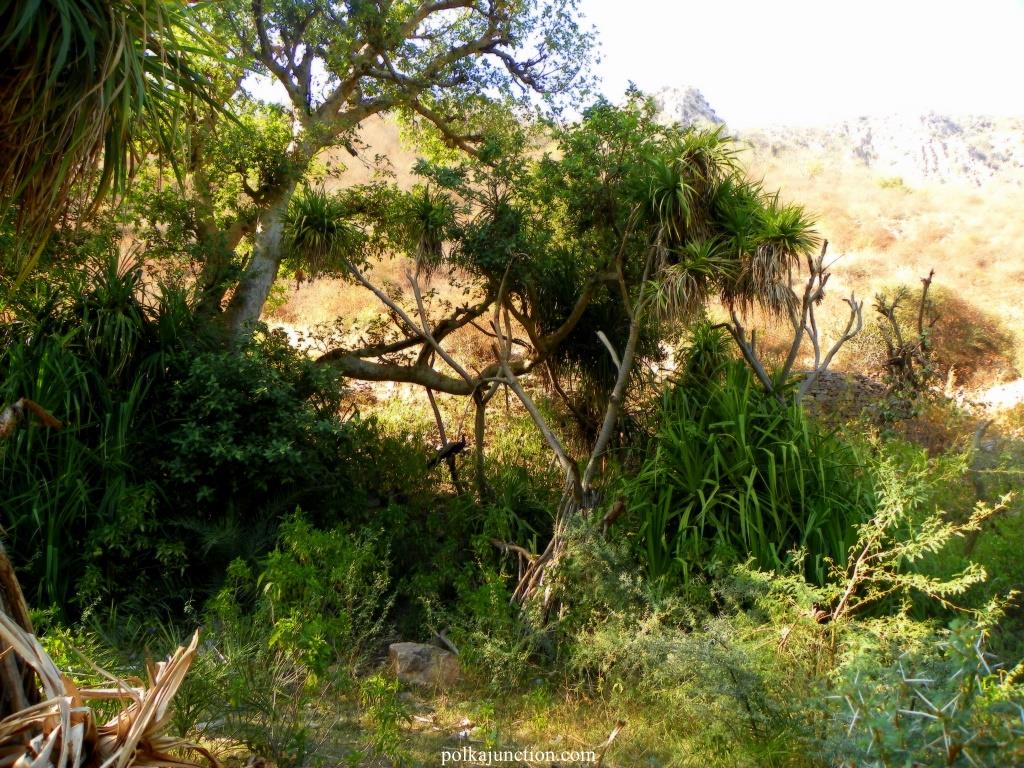 The Nagara style of architecture inside the Bhangarh fort

Haunted or not, the fort with its ruins sings the praise of a bygone era through its architectural splendour. The temples stand testimony to a rich Nagara style of architecture. Upon seeing the intact temples, I wondered, if the theory of spirits and ghosts are indeed true! Well, how can one explain the ruins of the other parts of the Bhangarh fort complex to the almost restored and intact structures of these temples?

The Gopinath Temple is built above a raised plinth and is exquisitely carved with sculptures and ornate ceilings. There is no idol in the sanctum unlike that of the Someshwar Temple. 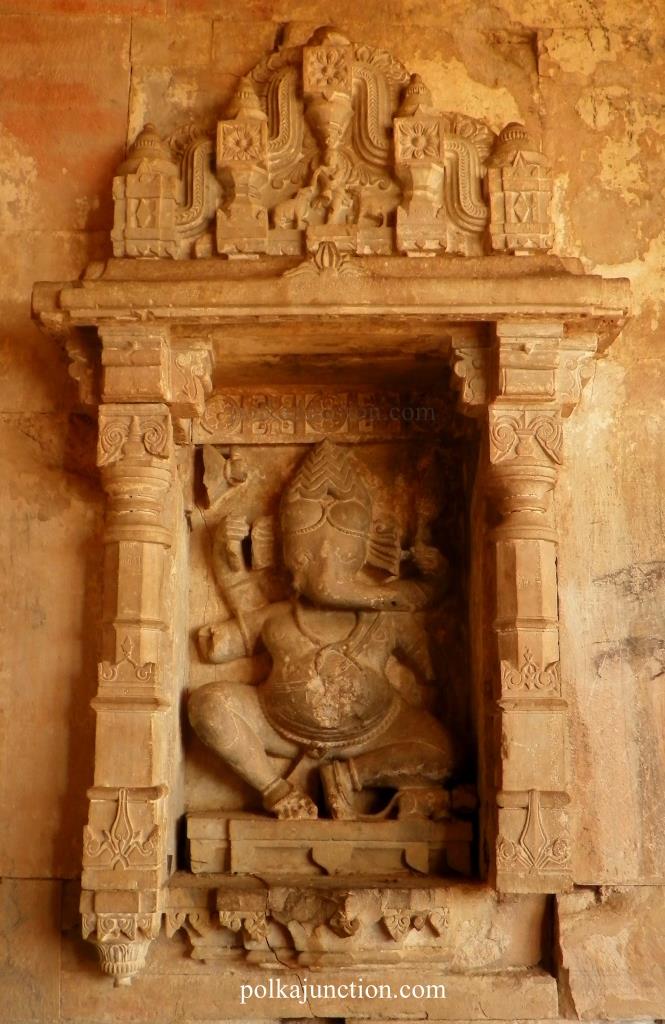 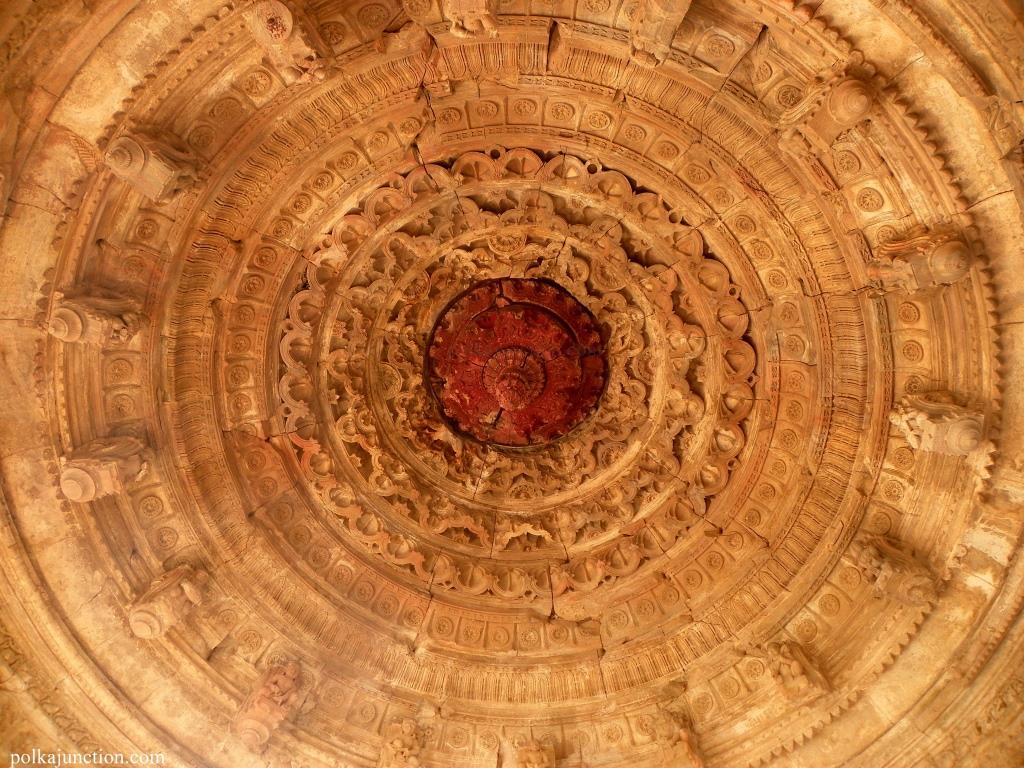 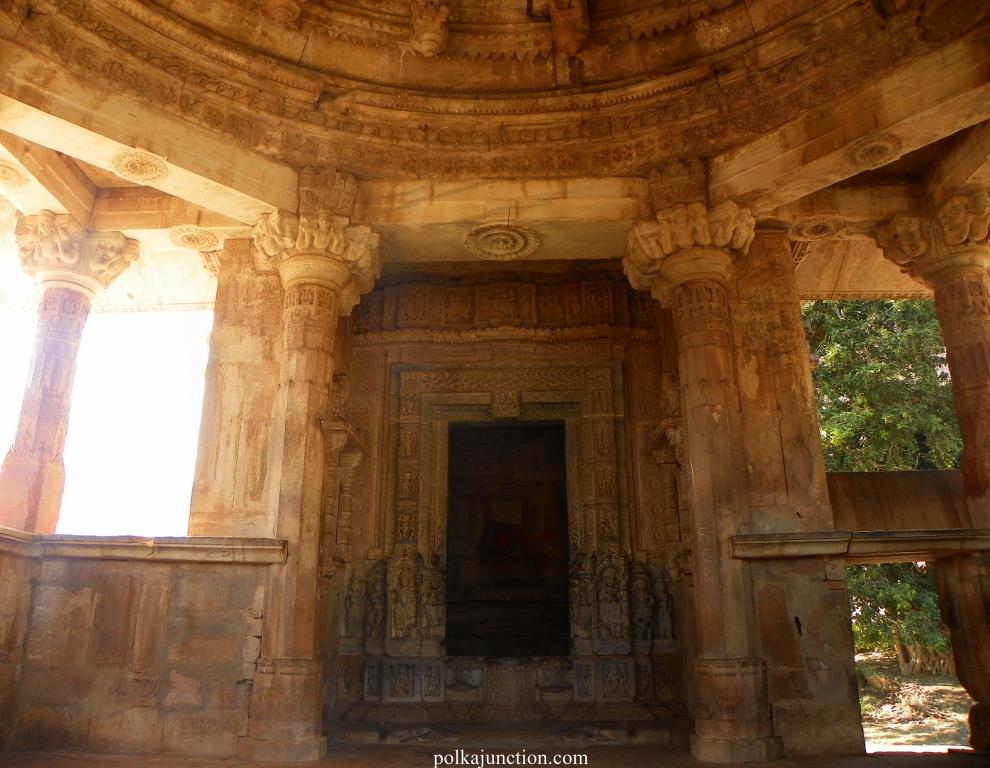 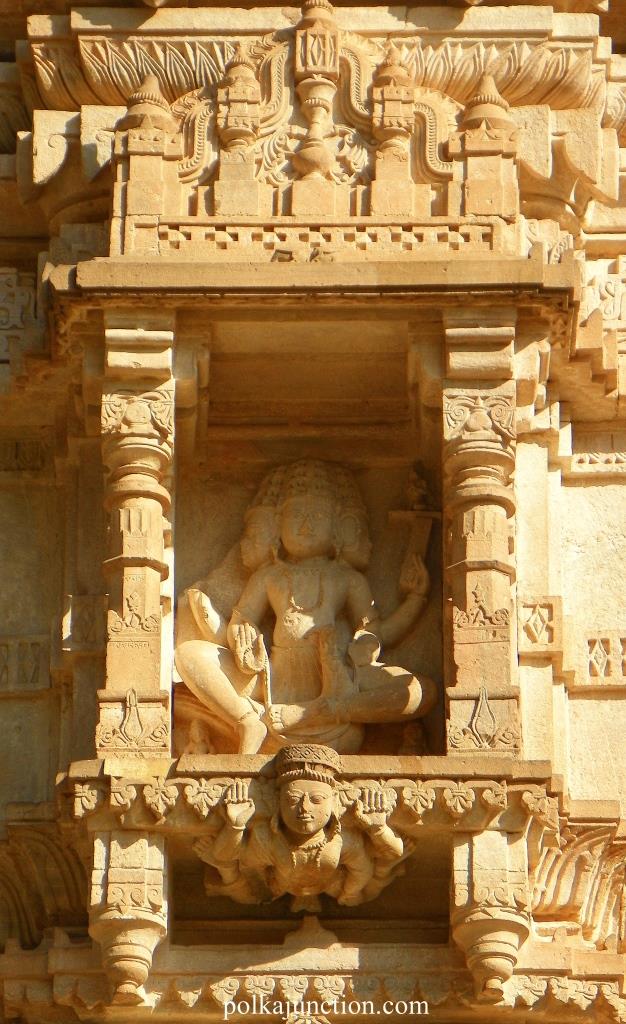 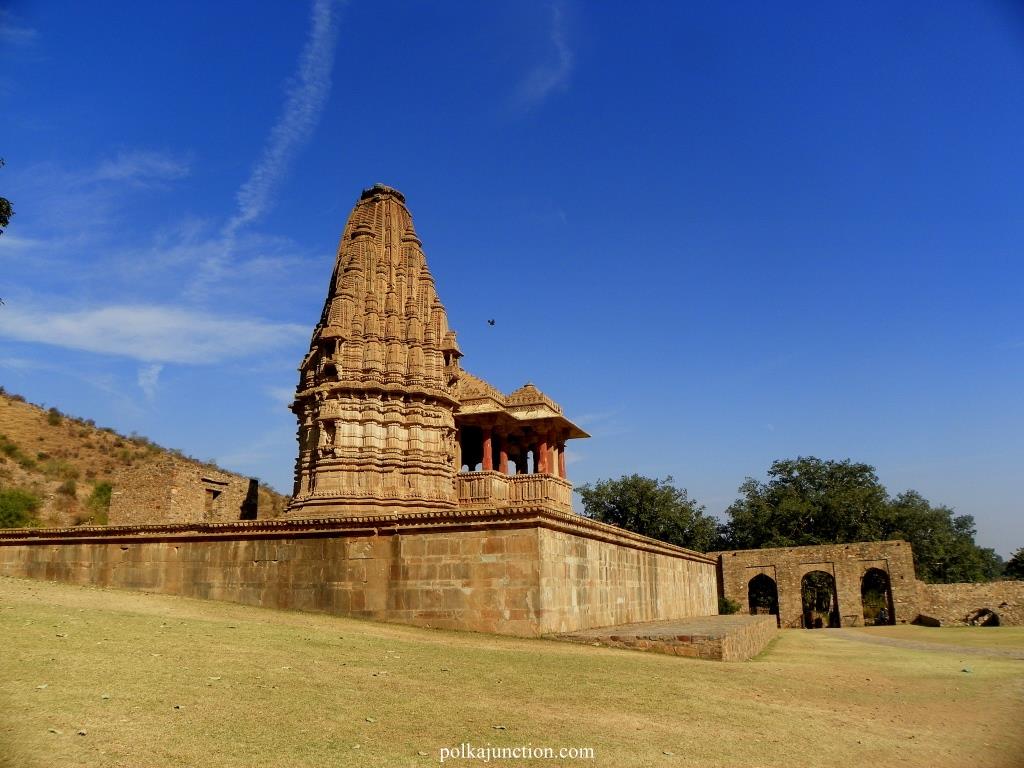 Though our family trip to Bhangarh was a memorable one sans any unfortunate events, two incidents that still haunt me of that trip are- the sounds of anklets around the water tank area that no one could hear except me and the sight of a twisted hanging root that resembled a hanging man on a banyan tree.

Let me know if you too are able to locate him in my capture of that haunting tree, below. 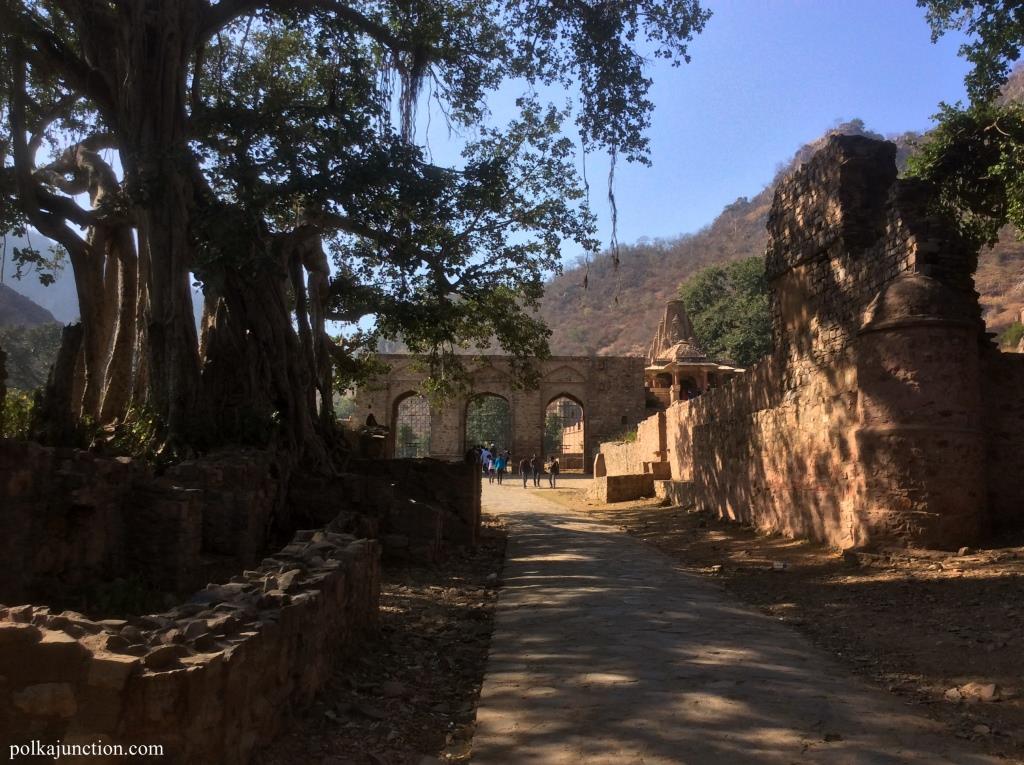 How to reach the Bhangarh Fort

Best time to visit the Bhangarh Fort and its many temples

October – March are the recommended months for a Rajasthan Visit. However, my suggestion to visit Alwar and Bhangarh would be the monsoons when the Aravalli Mountains come alive with lushness. Also, while in Alwar do visit the Moosi Maharani Ki Chhatri

I hope this information helps you to plan a visit to the Bhangarh Fort.

Also, have you been to Bhangarh or any other supposedly haunted forts in India or abroad? If yes, do share your tales with me in the comment section. 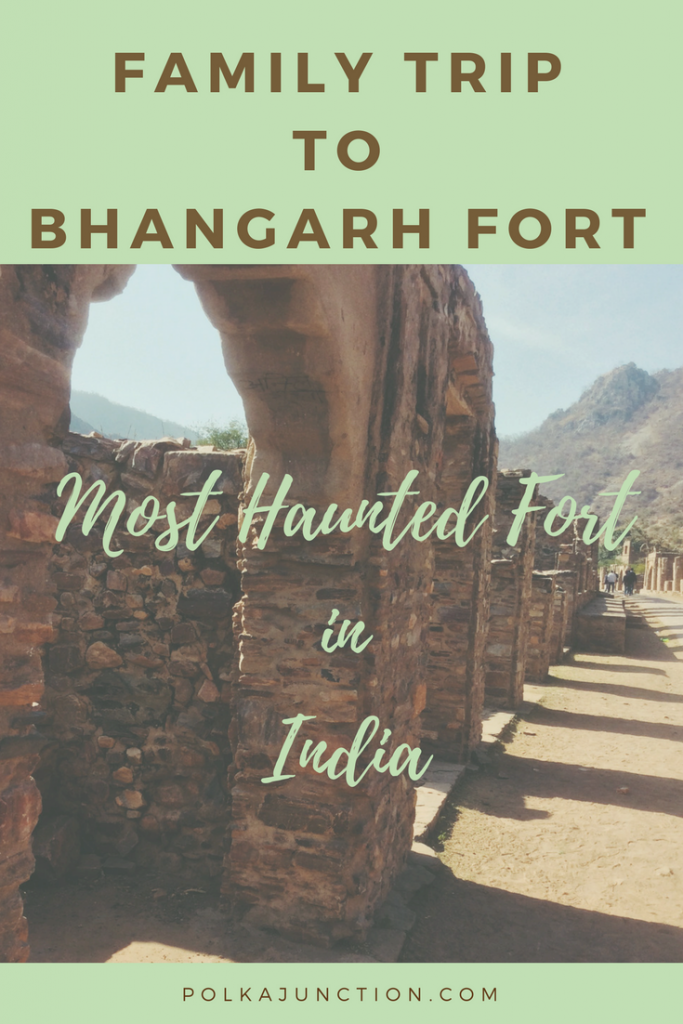