On our road trip to Alwar from Delhi, Moosi Maharani ki Chhatri was the first place that I wanted to visit and explore, owing to its captivating architecture. Just the thought of a monument dedicated to a queen revered as a goddess in Rajasthan fascinated me to no end.

So, come with me, as I take you on a virtual tour of Moosi Maharani Ki Chhatri located in the heart of Alwar, Rajasthan.

Rajasthan is all about royalty, masculine valour, Rajput war stories, and a patriarchal presence. Although the region is known for its reverence to women in various divine forms, the infamous social practices of child marriages and Sati that once dominated the state cannot be ignored. Thankfully, these are becoming less prevalent ascribable to strict laws and wide-spread social awareness.

So, one can understand my surprise when I got to know about a chhatri/memorial named after a woman in the oldest Rajasthan territory of Alwar during my research prior to the trip. Moosi Maharani Ki Chhatri came across to me as a historical structure just for this simple reason.

Also, the name ‘Moosi’ was so similar to the name of the river that once flowed through Hyderabad or Bhagyanagar in south-India. Hence, I wanted to check if there was any remote connection between these two places.

For the uninitiated, Alwar is located in the oldest region of Rajasthan. This region was known as Matsya pradesha aeons ago with its capital at Viratanagari (present-day Viratnagar or Bairat) ruled by the Suryavanshis. Lord Rama is a Suryavanshi!

However, unlike other cities of Rajasthan like Jaipur and Jodhpur, one may not find too many tourists here, and that works perfectly for someone like me who abhors crowded monuments and places of interest.

If I have to recommend one place in Alwar for heritage and architecture lovers then it ought to be the Moosi Maharani Ki Chhatri. 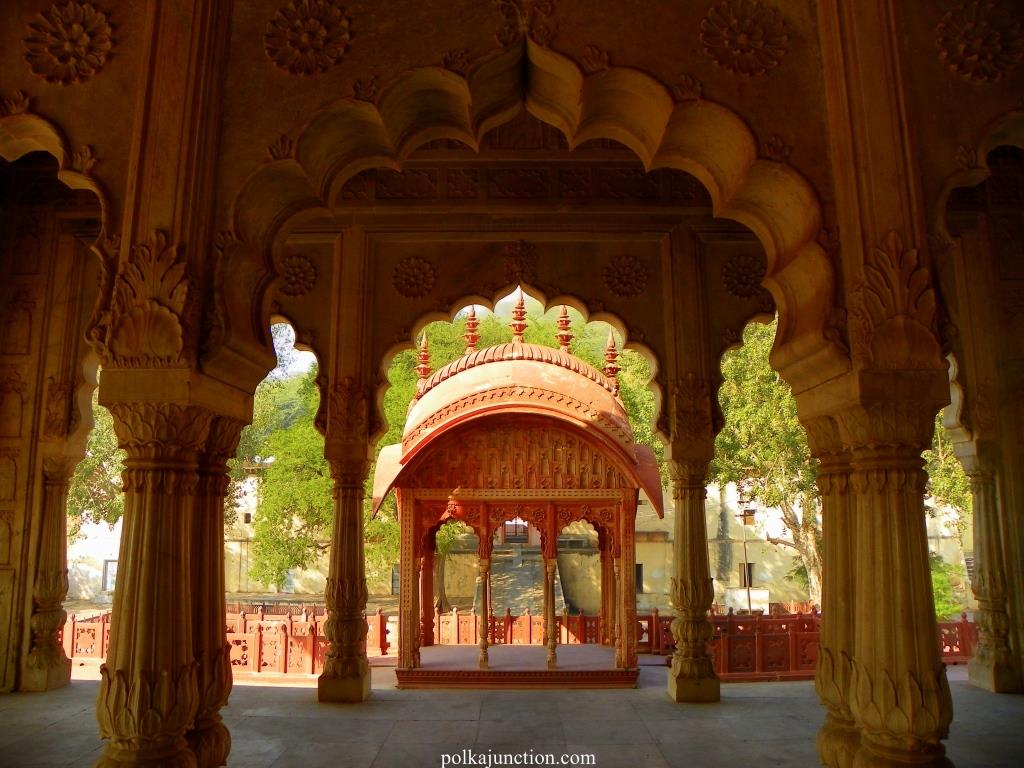 In the royal state of Rajasthan, Chhatris are built on the cremation sites of wealthy and distinguished individuals of the society. Chhatris may consist of a simple structure of just one dome raised by four pillars, or can also be a building containing many domes and a basement with several rooms.

Nowadays, one can find these chhatris being used in the construction of structures with a Rajasthani touch, too.

In some places, the interiors of the chhatris are painted in the same manner as the Havelis (Mansions) of the region. Usually, they do not contain the remains of the individual, as cremation is a common norm and the ashes of the person are in turn immersed and strew across holy rivers. 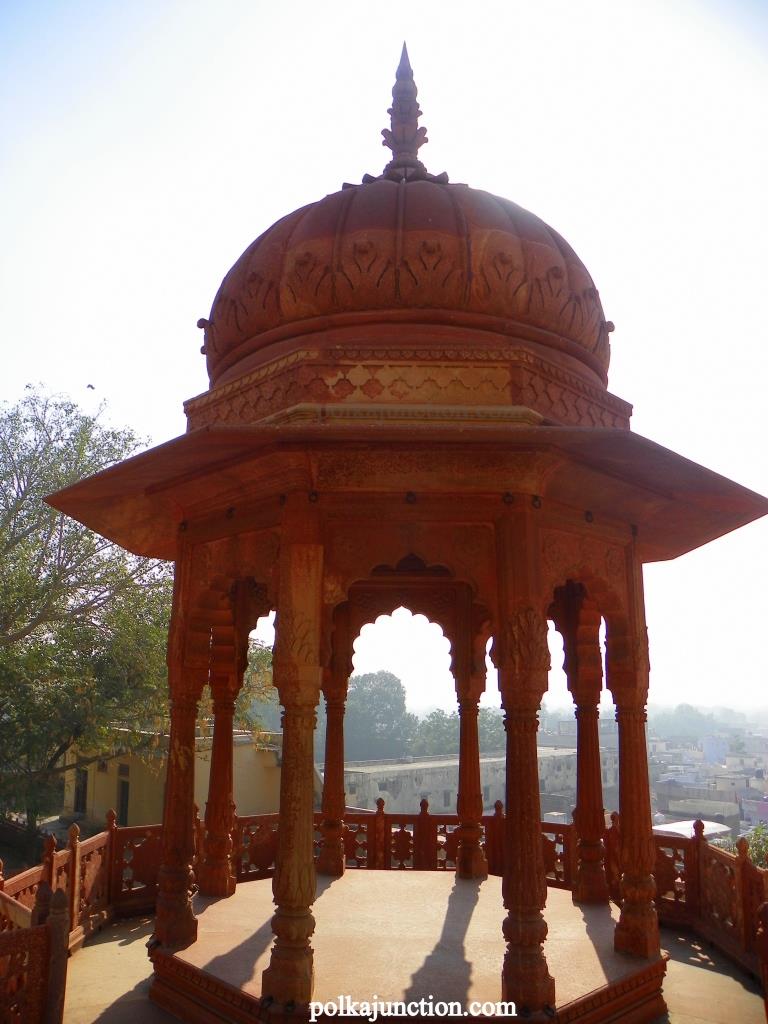 ‘The Moosi Maharani Ki Chhatri was built by Maharaja Vinay Singh (1815-1857) of Alwar, in memory of his predecessor Maharaja Bakhtawar Singh and the latter’s wife Maharani Moosi, who had committed sati (self-immolation)’- so say, the guidebooks.

But what is usually not discussed is how Moosi became the Maharani while some books brand her as a concubine and others proclaim that she was a village girl by whom the King was enchanted! Historical records can be quite unreliable many times…So the debate is still open. 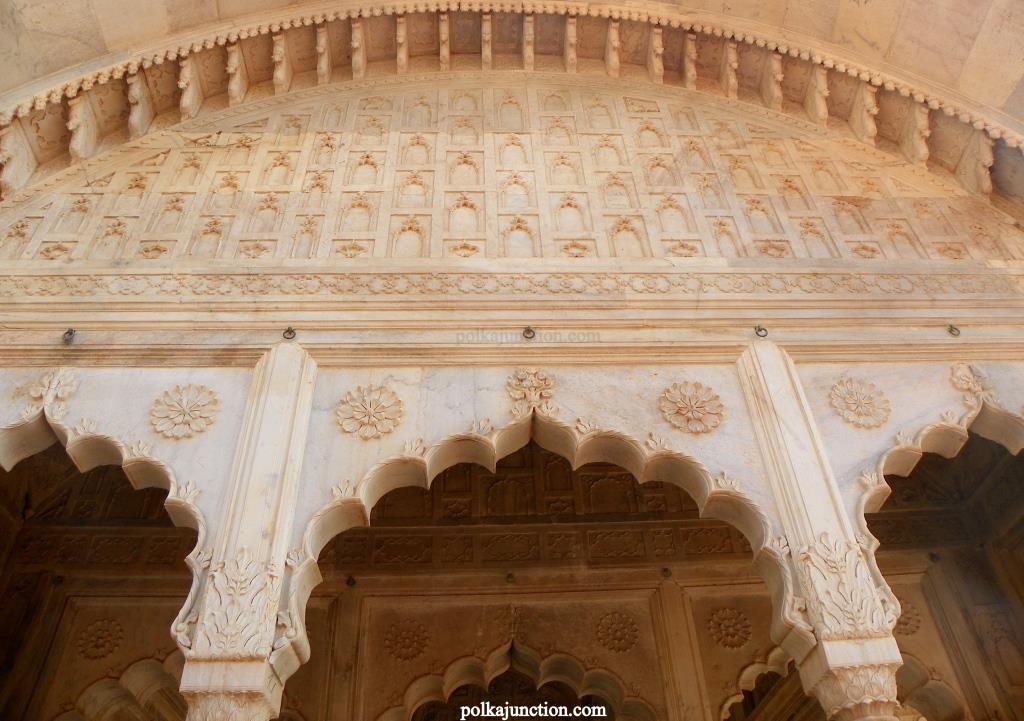 If one tries to associate the happenings of those years and the societal norms prevalent especially in the royal circles, then we can understand why Moosi Rani was a favourite of the King.

The local people offer their prayers every day to Moosi-Rani as she has achieved a higher-status after the immolation in her husband’s pyre.

Who constructed the Chattri for Moosi Maharani?

And it is Vinay Singh who ordered the construction of the architecturally spectacular Moosi Maharani Ki Chatri and the beautiful Sagar Kund that has seen the passage of time. Some claim that the territory was divided into three parts and the last part went to the Islamic Khanzadas. 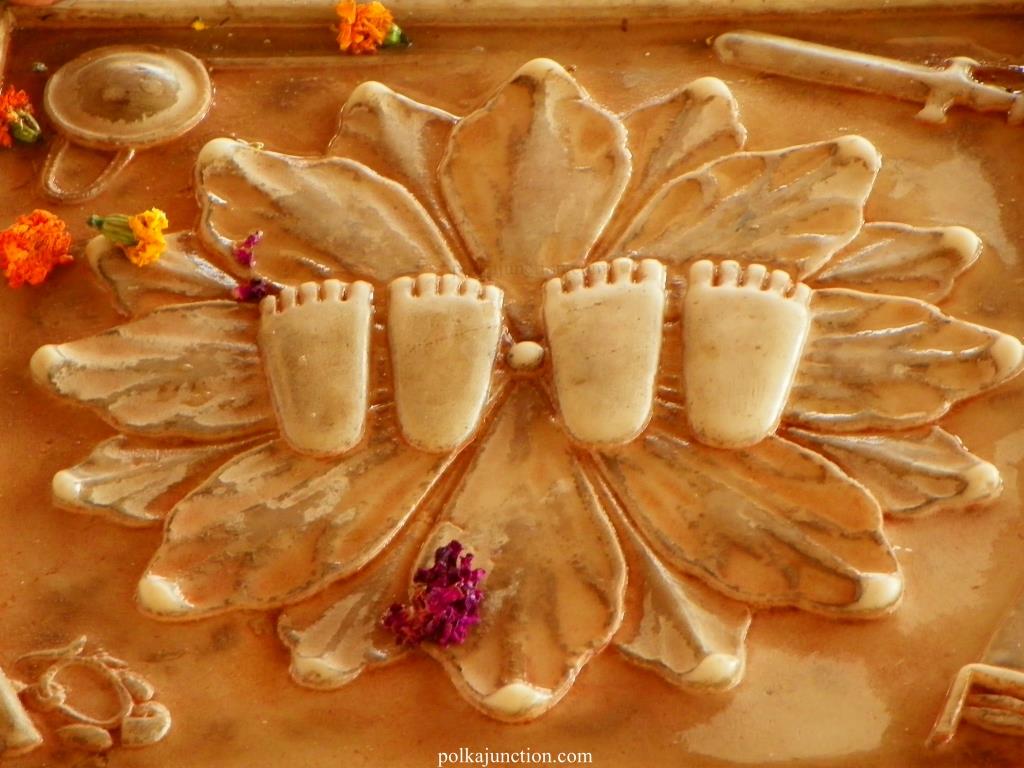 Interestingly, the Moosi Maharani Ki Chhatri has an elephant-shaped structure with a combination of domes reflecting the Islam influenced Bengali Architecture, the unmissable red-basement, intricate carvings, and paintings.

It is a double-storied red-stone and marble cenotaph and it forms an interesting imaginary triangle with Alwar City Palace and Sagar Lake nearby.

The ground floor layout of the Chhatri

The ground floor of the Mossi Maharani Ki Chhatri is made of red-stoned plain corridors with doors devoid of elaborate carvings. This section is resemblant of the various Mughal monuments strewn across the country. It looks quite somber and dark, reflecting the region’s chaotic past!

While the interiors are gloomy, the exterior red-pillars and carvings shine brightly on a sunny day. 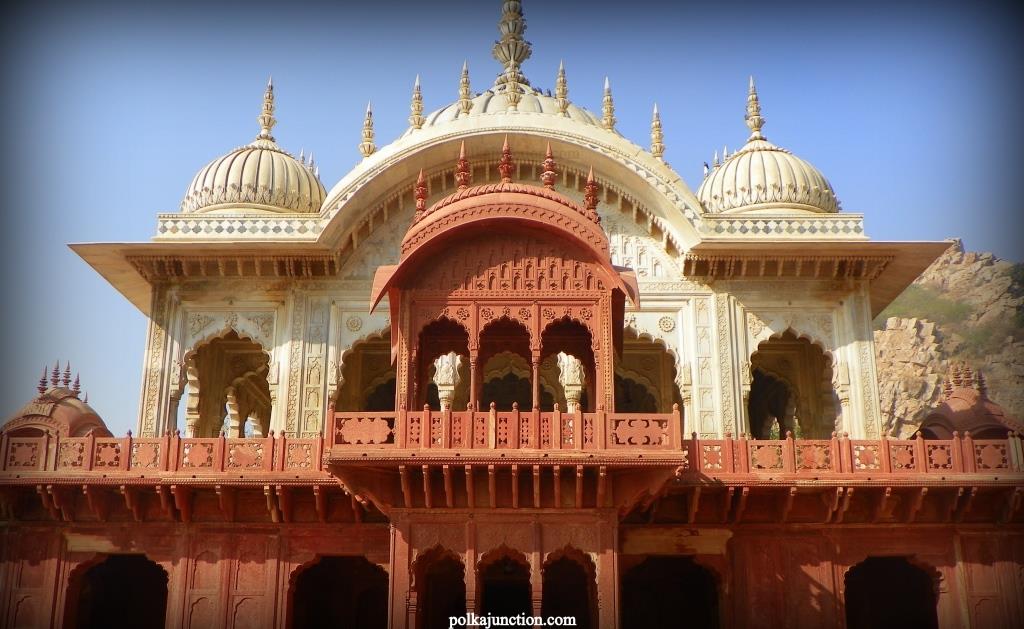 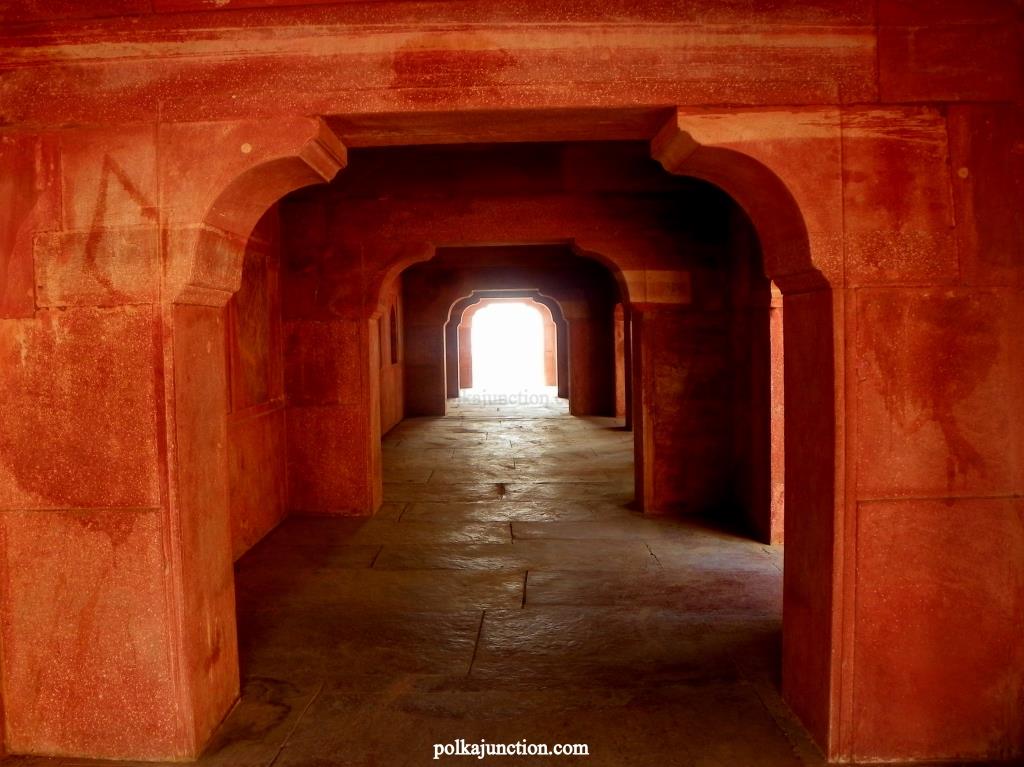 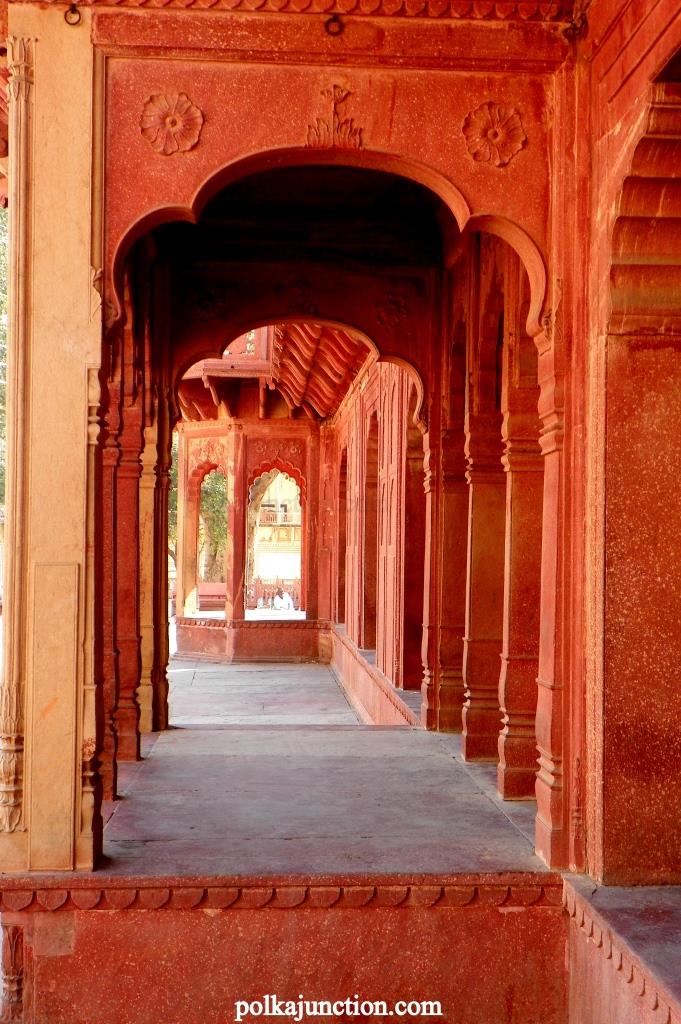 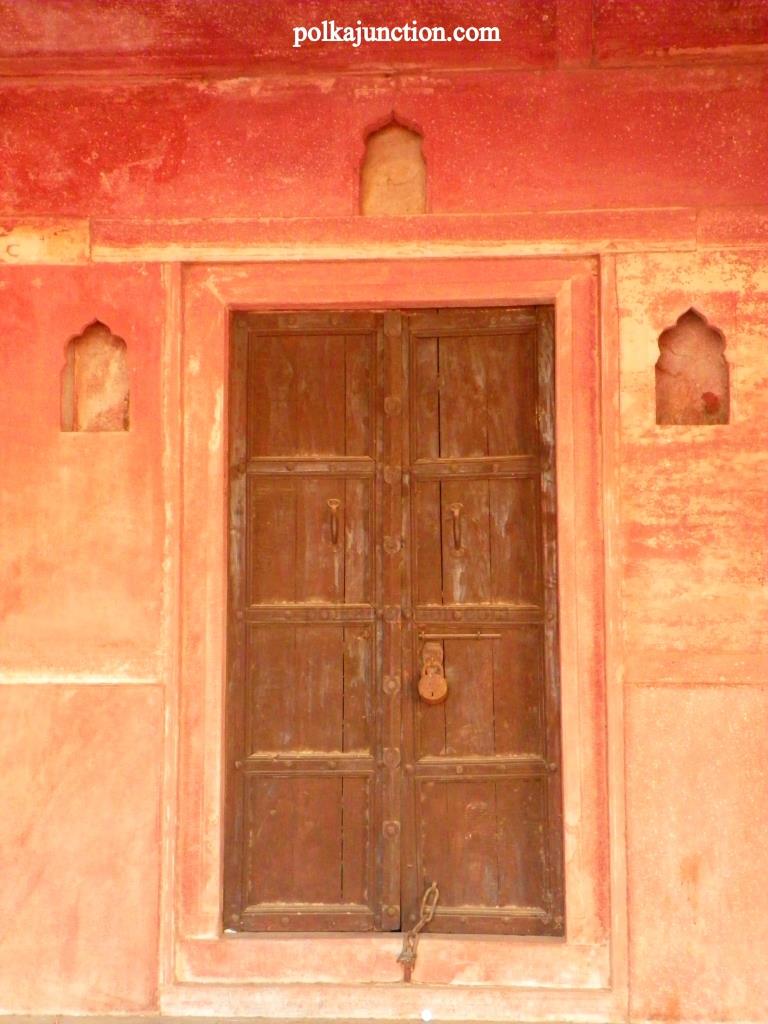 The first-floor layout of the Moosi Maharani Ki Chhatri

The first floored marble structure of Moosi Maharani Ki Chhatri is in contrast to the red-stoned ground floor. Unlike the previous floor layout, the marble structures have intricately carved figurines on its ceiling and a vibrantly painted dome with gold.

Full bloom lotuses adorn the beautifully chiselled pillars that support the delicately carved marble roof and the raised chhatri. This hall encloses the foot-prints of both the late king and queen.

The ceiling of the dome has finely painted frescoes with floral motifs in gold and vibrant colours, that has not paled much over time. I observed that there was no harsh light present inside this open hall. Maybe a reason as to how these delicate paintings have withstood the tests of time. 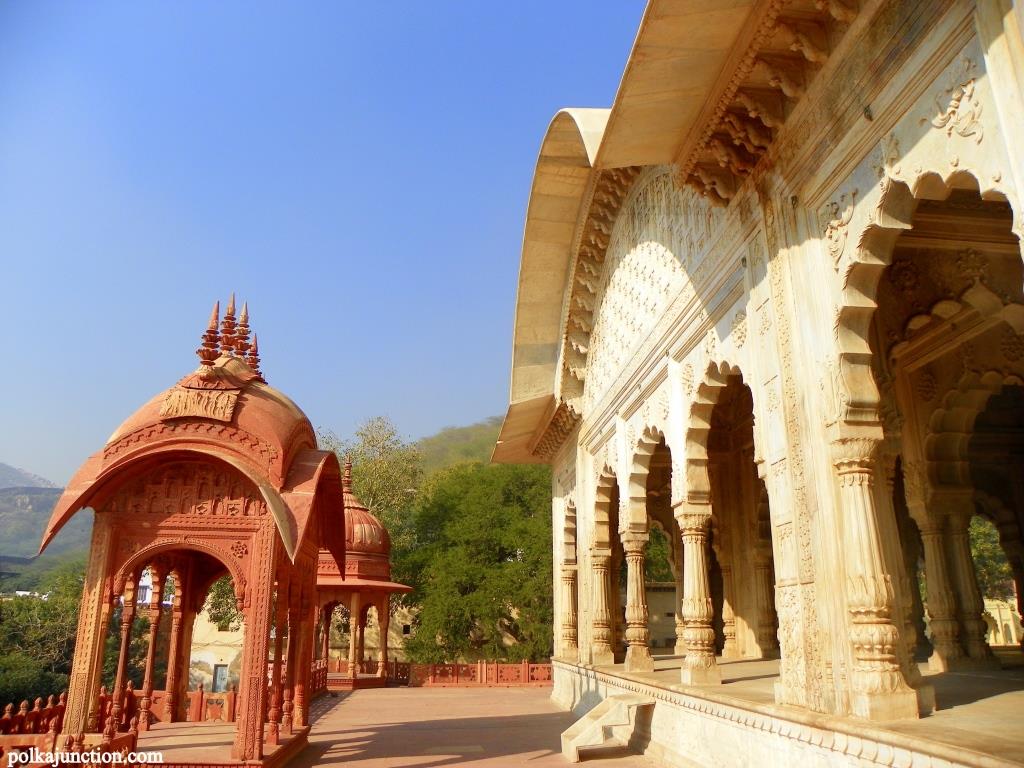 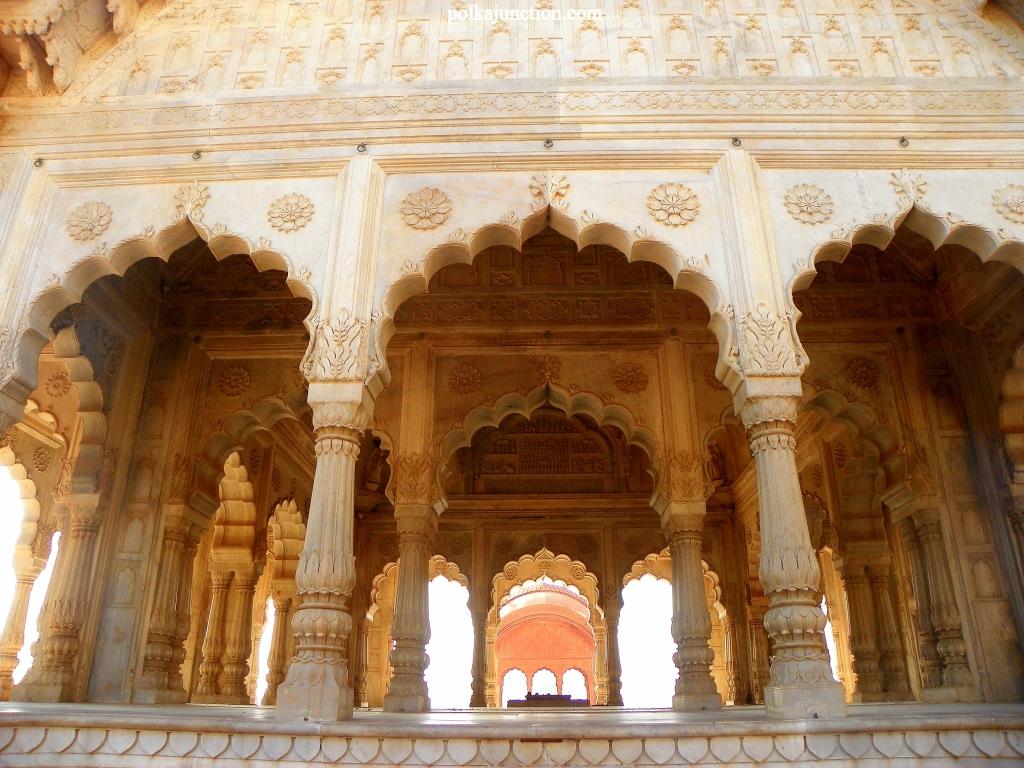 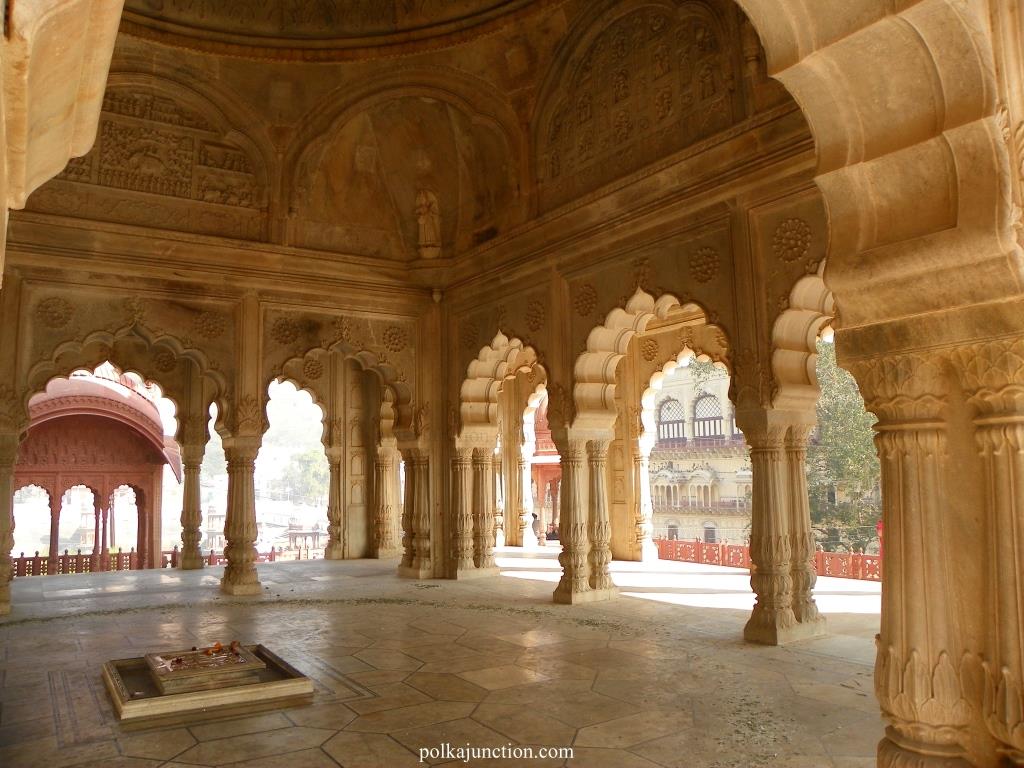 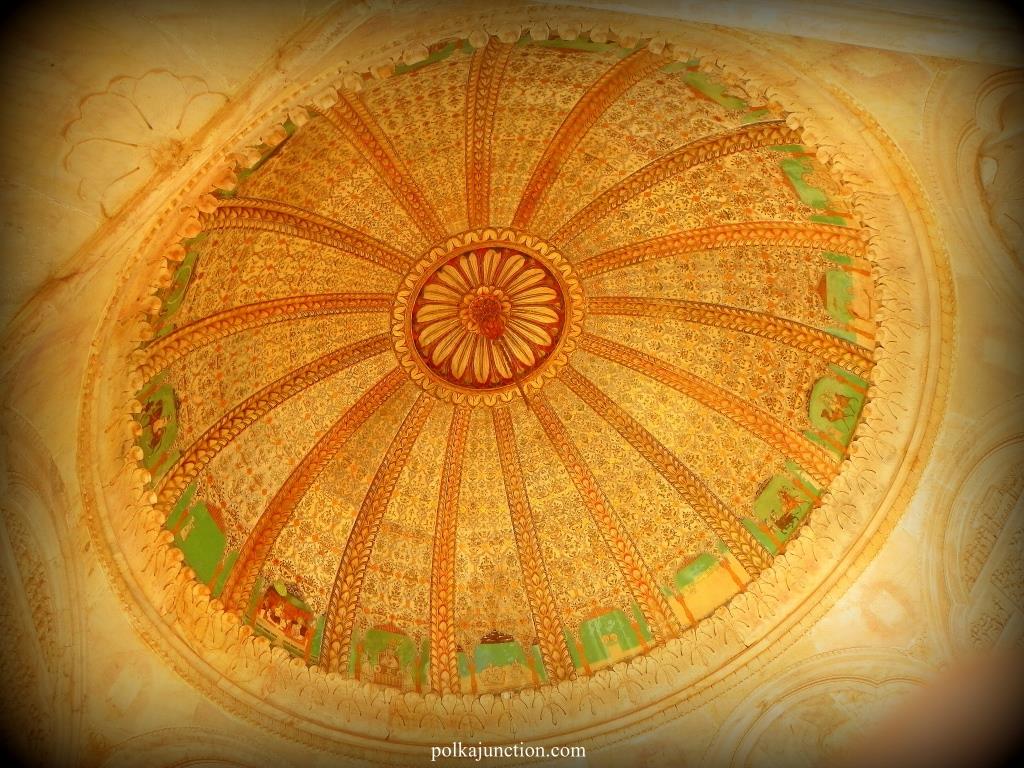 The Cenotaph and its carved ceilings

One of the marble carvings on the ceiling, depicts the court proceedings of a bygone era, entertainment avenues of the King, hunting and war scenes, and of course replete with European figurines.

Since the cenotaph was built in 1815, Western influence and dominance are quite prominent. And many of the carvings on the ceilings are a reflection of the same.

While a few more carvings depict the Dasavathar(the ten incarnations of Lord Vishnu) and scenes from Indian epics. I found discrepancies in this, as the Kurma Avatar and Rama Avatar were missing, and instead, Krishna was depicted twice in the Govardhanagiri dhari form and as Aalinai Krishna( Baby Krishna on a leaf sucking his toe) – a major resemblance to Tanjore Paintings.

Interestingly, the Rama Avatar was carved on a different set along with the life events of the King. Very similar to the royals of Thailand who consider themselves as followers of Lord Rama.

In spite of all the drawbacks, Moosi Maharani Ki Chhatri looks magnificent with its carvings and Indo-Islamic Architecture. Although its premises requires better maintenance. The Chhatri is definitely in an utter state of neglect with cobwebs hanging everywhere, pigeon poop strewed all around and green algae running amock in the nearby Sagar Kund.

Yet, the Sagar Kund beside the Moosi Maharani Ki Chhatri offers a pleasant view with its green-algae filled pond water at least from afar. The scene is an eclectic mix of red, white, pastel shades, and the green of the algae. 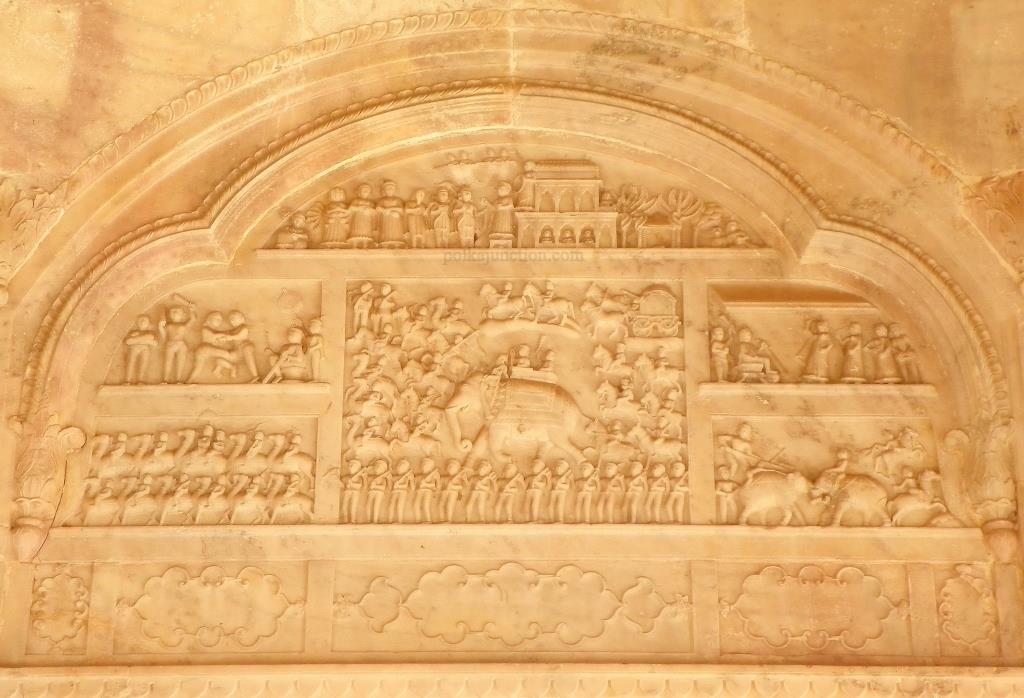 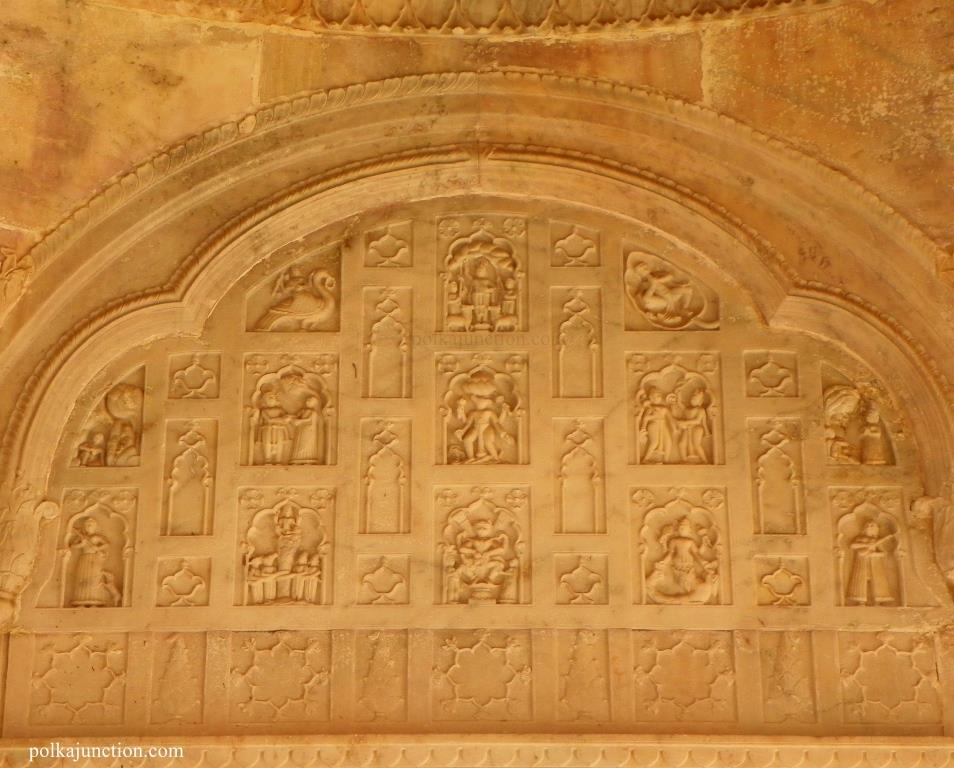 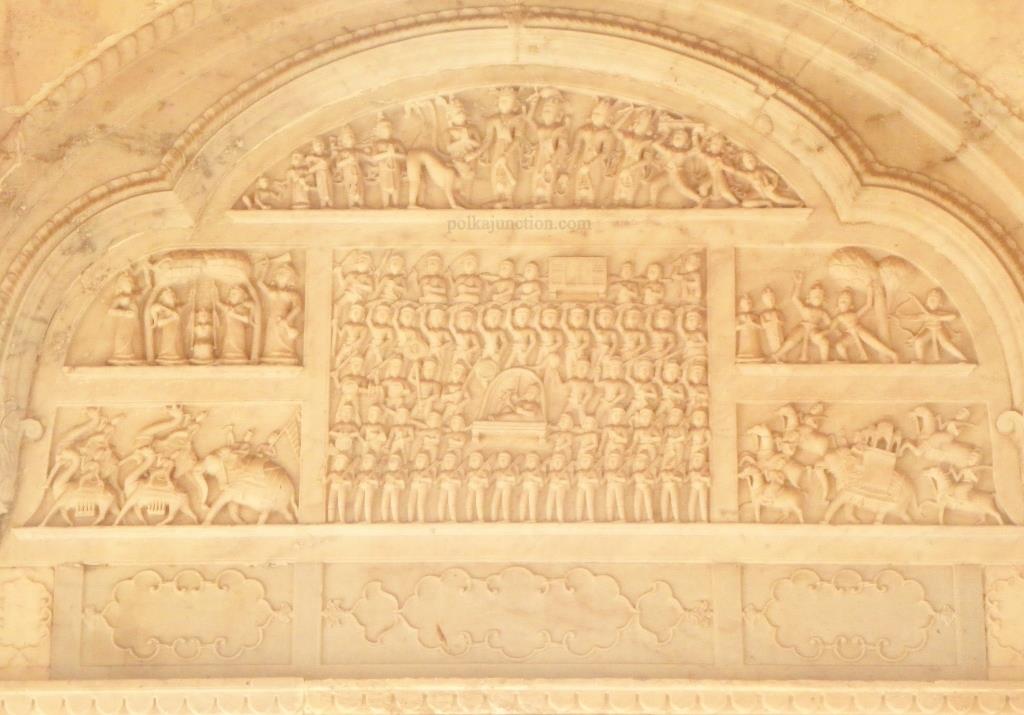 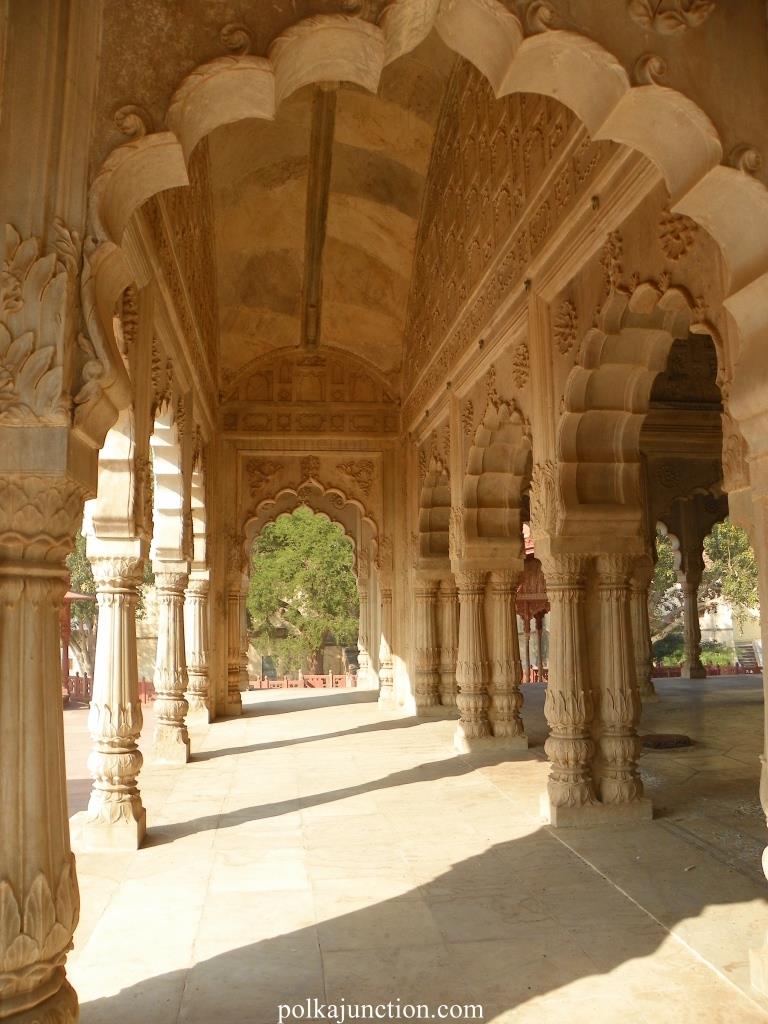 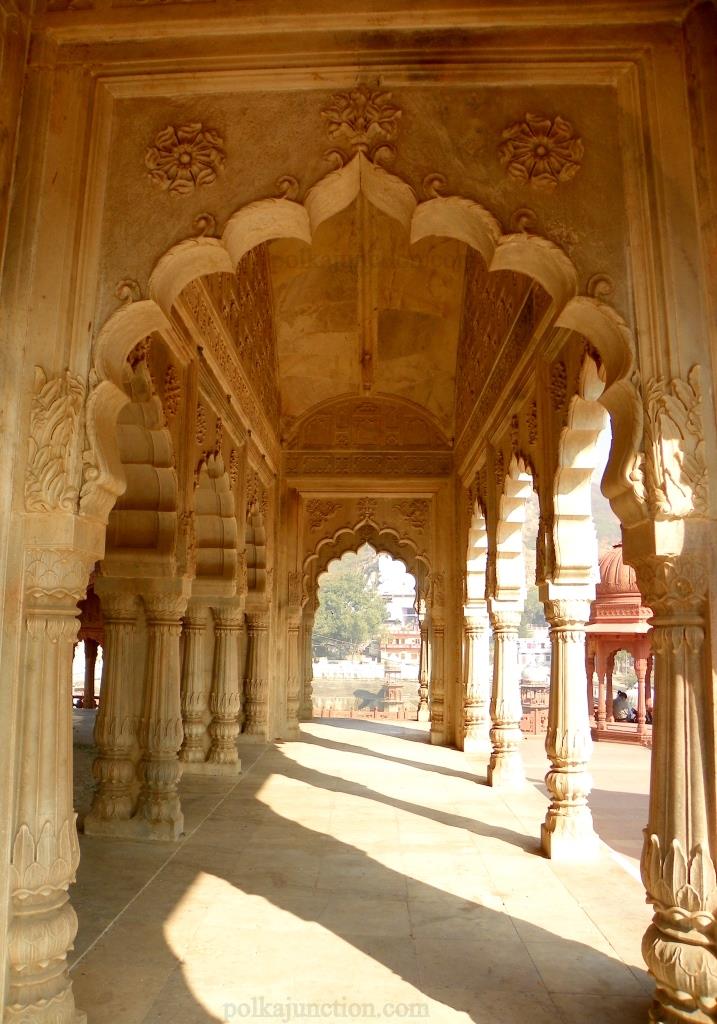 Even though the architecture of Moosi Maharani Ki Chhatri is spectacular, one cannot deny the cloud of sadness that envelops as you get to know of the past and the practice of Sati.

I still cannot fathom how a lady could immolate herself upon her husband’s death. Could it be to escape from insecurity, or from societal pressure? Could someone indulge in this sort of practice and sacrifice everything for the beloved  ???

And to realize that this was the practice for many years not just in India but in other civilizations like Greece and Egypt is in itself quite disturbing. Surprised that this practice isn’t limited just to India, is it?

Well, although the Britishers brought in a law to abolish the practice, it doesn’t mean that the practice was prevalent all across India. As far as I know, this practice was mostly restricted to parts of Rajasthan and Bengal.

Probably, if I tell you that it was a custom among the Egyptians, Greeks, Scythians, and others to bury a dead king with his mistresses or wives, servants, and materialistic things, you would understand the intensity of this issue. This was purely done because they believed that the king may need all this and that they could continue to serve him in the next world!! 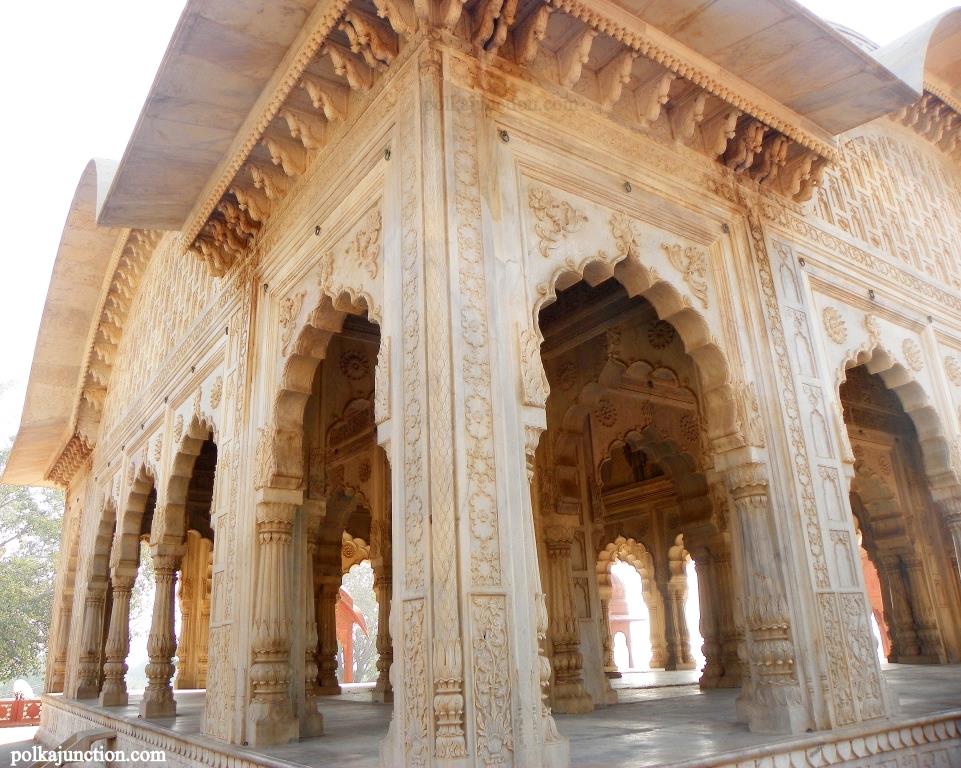 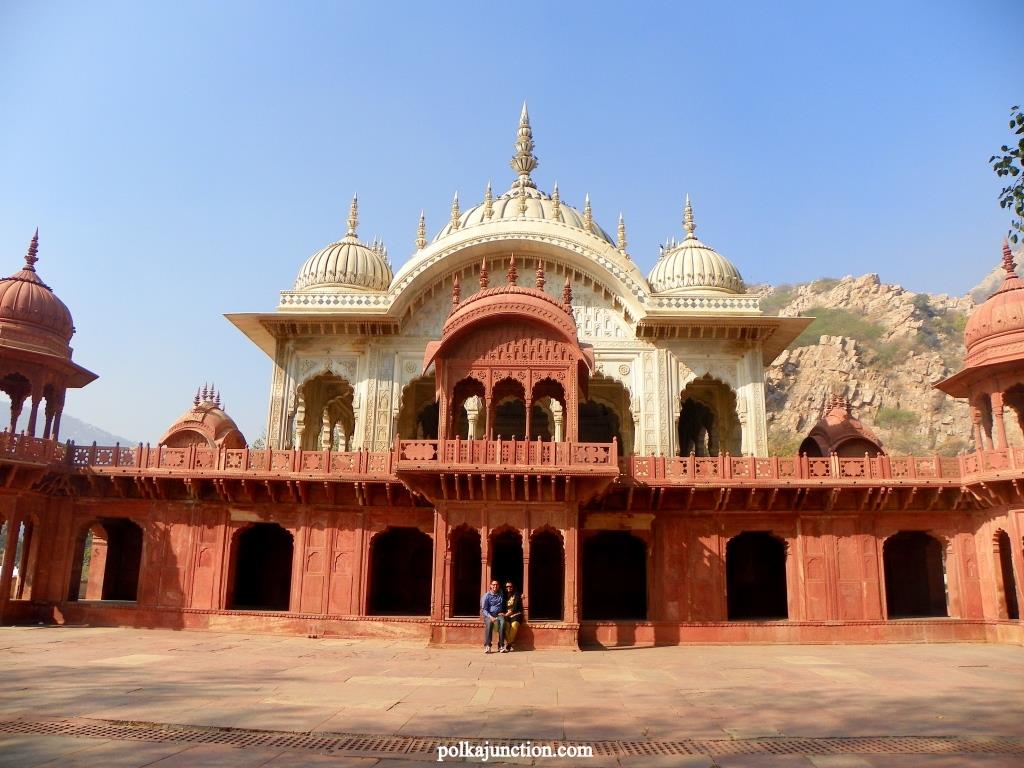 My thoughts on Sati

Sati translates to righteousness in Sanskrit. Sati the consort of Shiva according to Hindu scriptures, of course, did not commit suicide on her dead husband’s pyre. She jumped into a pyre in a fit of rage against her father’s doing. Therefore, the custom of burning the widow on her dead husband’s pyre probably did not evolve due to religious reasons but from a crooked societal mindset!

These are my thoughts on this practice. Do share your thoughts about Sati in the comment section. Because I believe that a trip or visit to a heritage monument should be beyond sharing photos and information.

A trip to Moosi Maharani Ki Chhatri could be clubbed with a visit to the Alwar City Palace as well as the Sagar Kund that are nearby.

There is no entry fee to visit Moosi Maharani Ki Chhatri or Sagar Kund.

Timings to visit the Chhatri

Hope you found this post useful. Also, if you have visited the Moosi Maharani Ki Chhatri in Alwar, feel free to share your thoughts on its architecture and this photo-tour of mine. And, if you still haven’t visited the monument then why not use one of the long weekends this year to visit this beautiful place as well as the Havelis in Rajasthan!