India is one of the largest consumers of cookies in the world. So much so, a search for “Indian butter biscuits” throws up thousands and thousands of recipes. Not surprising, as Indian cookies are a class apart — what with added spices and indigenous ingredients that go into baking them to perfection.

The country is also the second-largest producer of tea in the Asia-Pacific region, after China. While, among the southern states of the country, Tamil Nadu is the highest producer of tea and of course also consumes it a lot, thanks to the many tea-shops and coffee-bars dotting the state.

However, without the inimitable Indian cookies or butter biscuits and boisterous tea-kadai patrons, the success story of India’s many teas would remain incomplete.

Did you know? Biscuits and cookies of over 632 thousand metric tons were produced in the south Asian country of India during the fiscal year 2020!

All about delicious butter cookies and the tea-kadai saga

As said before, Indian butter biscuits and tea-kadai stories go hand-in-hand. If you want to know the why and how, then, do stride across that road in front of your home and lurk around the nearest Indian tea-kadai. For, it’s the tea-kadai or chai-kadai that completes every street corner in the country [or at least many of the main streets in this changing India].

Well, I am sure you must be calling it the chai ki (ka…whatever) dukaan in Hindi or tea kottu in Telugu or as we Tamilians call it…tea kadai [ pronounced as ka-dei and not to be confused with the Hindi ‘Kadai’ as in wok].

While here, you should be able to spot a bunch of people standing or sitting, taking a bite of the many Indian cookies and talking animatedly holding tea glasses. This constant buzz is what adds character to the good-old tea-kadais.

So, what’s special about this, you must be wondering. For, there are modern Chaayos and Baristas in every city with the priciest and the most exotic of the teas, coffees, and other beverages accompanied by bespoke cookies being served in the swankiest of environs possible, where groups regularly gather.

I know…I know… yet, these tea kadais hold exclusive cultural significance in India especially in Tamil Nadu, and the cookies they store in glass jars unmissably are melt-in-mouth.

Additional reading
I had this delicious masala chai in one of the restaurants in Bali. Are you planning a trip to Bali in the near future? Then, do have a look at our 7-day Bali itinerary.

The trend of tea kadai

Tea kadai has been part of India’s culture for a long time (maybe a little over a century), or at least from when tea got incorporated into the country’s societal fabric during the British Raj.

From simple stalls under thatched and tinned roofs to the concrete ones chequered with long wooden benches, the tea shops of India have always carried their inimitable style and character.

A few decades back, precisely in the mid-80s, during my childhood days spent in Tamil Nadu, almost every street had a tea kadai, that doubled as a meeting point for many: from the brightest minds to the special-at-everything-apart-from-academics and from the I-would-rather-lie-low to born rebels.

And this lot included my then young uncles. But the task of ushering them back home from the tea-kadai rested on me, thanks to my grandma’s orders.

Take a trip while you sip tea
Embark on a virtual tour of Hyderabad’s eclectic street-art with me through this post.

The hub of current affairs

Each day, almost every man in the colony seemed to hang-out at these tea-kadais and ponder over shared pages of the day’s newspaper. This was then followed by animated arguments, debates, and constructive discussions on topics ranging from the once-autocratic rule of Indira Gandhi to the politics of Tamil Nadu that often ruled the roost.

The euphoria around India’s victory at the World Cup of 83 hadn’t stilled faded away then…rather it had induced a new zeal among youth to take up cricket as a sport and a profession for many. So, yes, during tournaments, the tea-kadais used to make good business, with all the men huddled around the radio, listening to some sensible commentary over interminable tea or coffee.

While the faces at the tea kadai and topics of discussions were seasonal, there were a few constants too.

Firstly, women were missing at these tea-kadais. Maybe if it was run by a duo of husband-wife or if there was an odd woman-worker, then yes…otherwise, these joints were literally off-the-limits for women.

Secondly, the tea-kadai had (has) caught the fancy of the pop-culture of every decade especially in Tamil Nadu and Andhra. Be it a short commercial on TV or movies, the tea-kadai has been a constant backdrop and locale, in every story.

Thirdly, the tea-kadai owner knew all the secrets of the men who frequented, and in some cases, they doubled as account-keepers and also money-lenders. Thus, inevitably becoming a part of the extended family.

A make-over to the tea kadai concept

Over the years, the tea-kadais in metropolises and cities have been given a makeover with glossy exteriors and high-rise seats catering to elitists, and honestly, they are out-of-reach for a large section of the Indian society [even for someone belonging to the middle-class like me].

I mean…why would I pay 120 bucks and upwards for a glass of tasteless-beverage that’s dispensed by a machine and is to be sipped inside the four walls that are as boring as the tea or coffee being served.

In my honest opinion, these cafes are just good as a backdrop for dishing out Instagram stories or to flaunt a book that you are not gonna eventually read. Call me a spoilsport, but this modern cafe culture isn’t for me.

However, one aspect that has made these chaayos and baristas famous is how inclusive they have made the Indian women feel— a sweeping change brought into the Indian tea culture, which has been missing when it comes to the tea kadais of yore.

Nevertheless, the scene around the tea kadais is definitely changing, with more and more women flocking them in the recent past, although the concept of a tea stall and coffee bar in its old form is slowly sliding into oblivion.

Additional reading
Ginger lemon honey tea is beneficial during winters and so is our compilation of tips and tricks to beat the Indian winters.

Fortunately, a handful of good-old tea kadais are still intact in many towns and villages of modern India, doling out piping hot Indian tea, coffee, and cookies by the hundreds every single day. With them also thrives the tea-kadai stories.

And, trust me when I say that nothing can replace the charm of gossiping and catching up with current happenings while sipping from the short handleless glasses in which tea, filter kaapi, Boost, or Horlicks is served ( yes! they still do serve the latter two), and digging our hand into the glass jar filled with Indian cookies: ready to satisfy every palette.

These non-branded cookies are what add the extra zing into the otherwise refreshing tea.

Living in Delhi, I miss the tea kadai cookies of Tamil Nadu, as well as the delectable Osmania and Karachi biscuits of Hyderabad. Owing to this, I often end up baking these by the dozens [ that they get polished off within a few hours is another story].

For now, I have recreated the taste of cardamom flavoured tea-kadai butter cookies albeit in a healthy avatar, avoiding refined flour, dalda (hydrogenated vegetable oil), and egg yolk( Osmania biscuits and some local brands of cookies are polished with egg yolk) which go into the making of these. And, I call these butter cookies the Indian cookies, for it’s made with chickpea flour that’s so indispensable when it comes to Indian cuisine and flavoured with cardamom, the queen of spices! 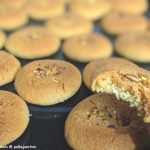 3 thoughts on “Indian cookies and tea-kadai stories : A vanishing trend”