One of the many British monuments of India and a prestigious institute that has been synonymous with Dehradun for over a century is the British architecture-inspired, massive, Forest Research Institute and its lush expansive campus. A must-visit-place in Dehradun.

I personally believe, this is the only place in Doon valley that hasn’t seen much of a change over the years since Dehradun was catapulted as the capital of Uttarakhand.

My very first visit to the Forest Research Institute (FRI), a couple of decades back, made me fall in love with this campus. Thanks to my maternal uncle who introduced me to this wonderful institute and its museums, that rekindled in me an interest in life sciences. So much so, that I opted for Biology as one of my subjects of study in junior college and saw future prospects in it by opting for applied sciences in my graduation.

This post explores this British monument in India apart from deciphering its British architecture. If you are here looking for details of the various courses that the Forest Research institute offers, then kindly visit the official website of the FRI.

Without wasting much time, let me quickly take you on a virtual photo tour of the sprawling estate of the Forest Research Institute and the FRI building.

I have always been in awe of FRI’s architecture, a fine example of British architecture in India, and also one of the often ignored historical buildings in India.

During a recent trip to an event conducted by IndiBlogger at Dehradun, I squeezed some time out of my busy schedule to visit the Forest Research Institute and fall in love with its architecture. I am glad the complex is being maintained scrupulously, thanks to its status as one of the important national heritage buildings in India.

Note
It was a misty and cloudy morning on the day we visited the Forest Research Institute complex. The sun graced us, as we entered the building and loitered along the beautiful corridors. Nature blessed us with a short spell of rain while we were in awe of the main entrance near the convocation hall. All this in a span of 90mins that we spent inside the building. Thus, the photographs in this post reflect varying hues of bricks and the FRI building, owing to the peekaboo of sun and the canopy of grey clouds!

Situated amidst lush greenery in a sprawling estate of almost 450 hectares, the Forest Research Institute’s colonial building designed along the lines of British architecture is spell-binding.

With the Himalayas as a backdrop, this finest of the British monuments in India presents its visitors with a perfect travel postcard from Dehradun. I am sure it looks spectacular with snow-covered peaks on a bright sunny day during the Winters.

The estate inside the FRI campus

We drove from the frontal entrance of the campus to the back and caught a glimpse of the beautiful estate, dotted with colonial cottages, that serve as the present-day homes of various instructors and forest officers of the Forest Research Institute. These snaps were captured from the comforts of our car as it was drizzling.

An officer’s guest house right at the back entrance of the FRI with its red-brick facade and chimneys popping out of the hip roof definitely looked like a dream and straight out of a British novel! 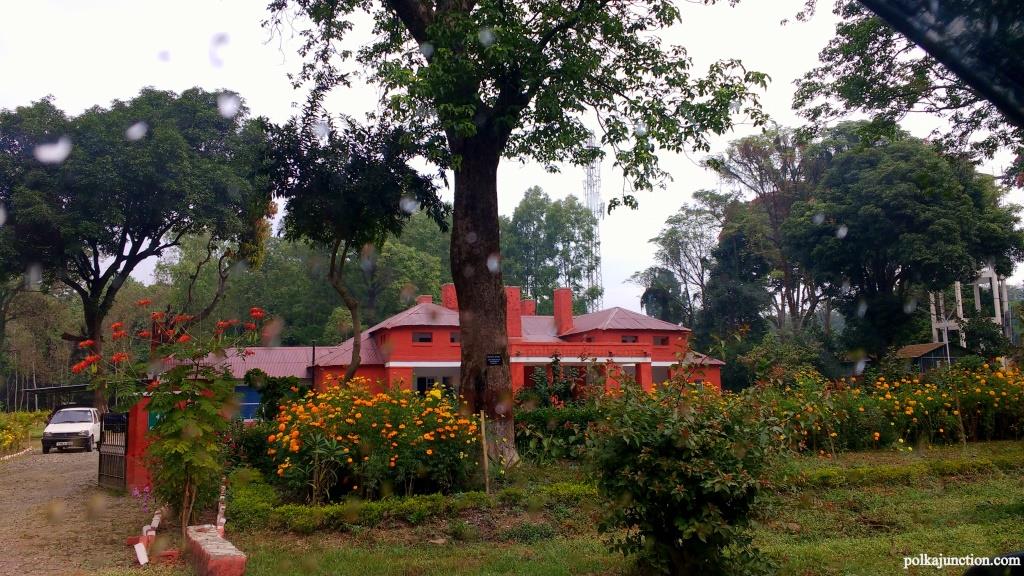 The mini forest inside the Forest Research Institute campus

The FRI campus is also home to a mini forest and I was immediately transported to the various cantonment areas we have lived in. It is a perfect idea to take a stroll along these canopied roads with trees lined in an array! 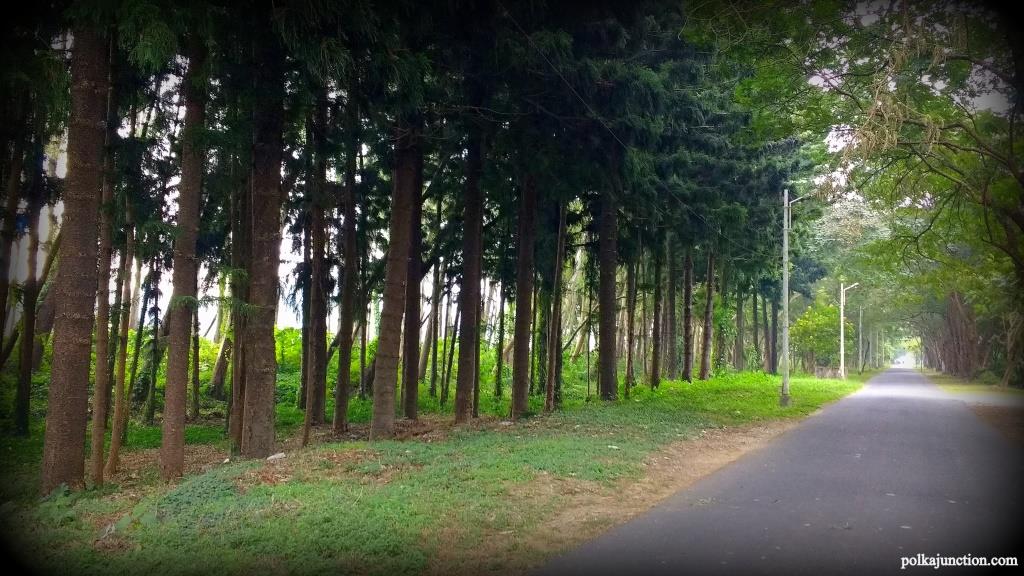 The main parking and the ticket counters are on the eastern side/back of the FRI building. Since we had no time for a tour of the museums and wanted to just visit the FRI for its architecture, we visited the place between 8:30-10:00 AM. 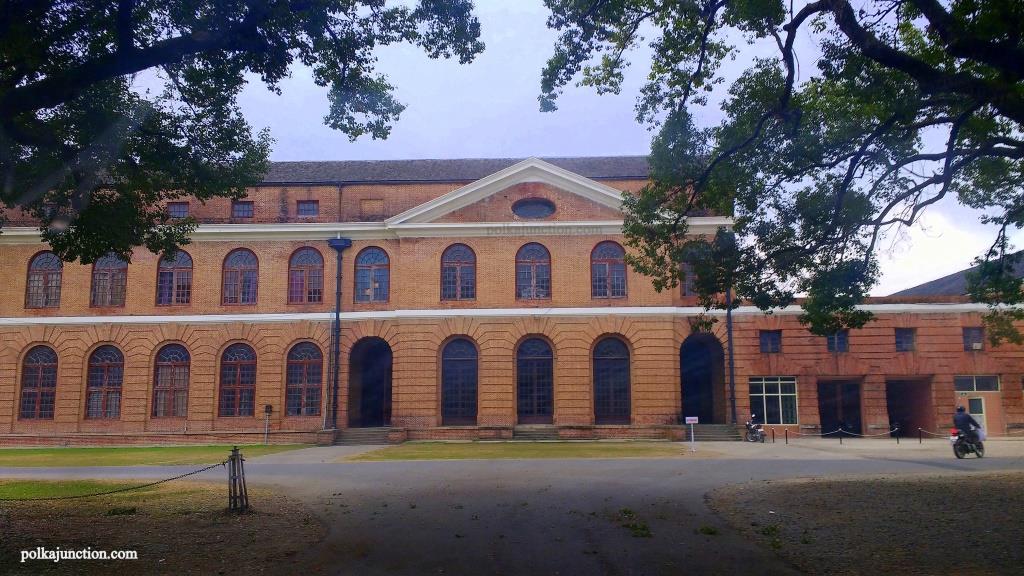 The FRI actually began as a small forest school at Dehradun in 1878 to impart training to forest rangers. This school, which was taken over by the central government in 1884 and named the Imperial Forest School, formed the nucleus of the present FRI. The history of the FRI is synonymous with the evolution and development of scientific forestry not only in India but also in the entire sub-continent.

Styled and designed as a hybrid architecture of Greek, Roman, and Colonial influences by C.G. Blomfield, the main building of the Forest Research Institute was inaugurated in 1929 by the then Viceroy Willingdon. The FRI building is said to have taken seven years to complete and the cost was a whopping sum of about Rs90 lakh of those days! 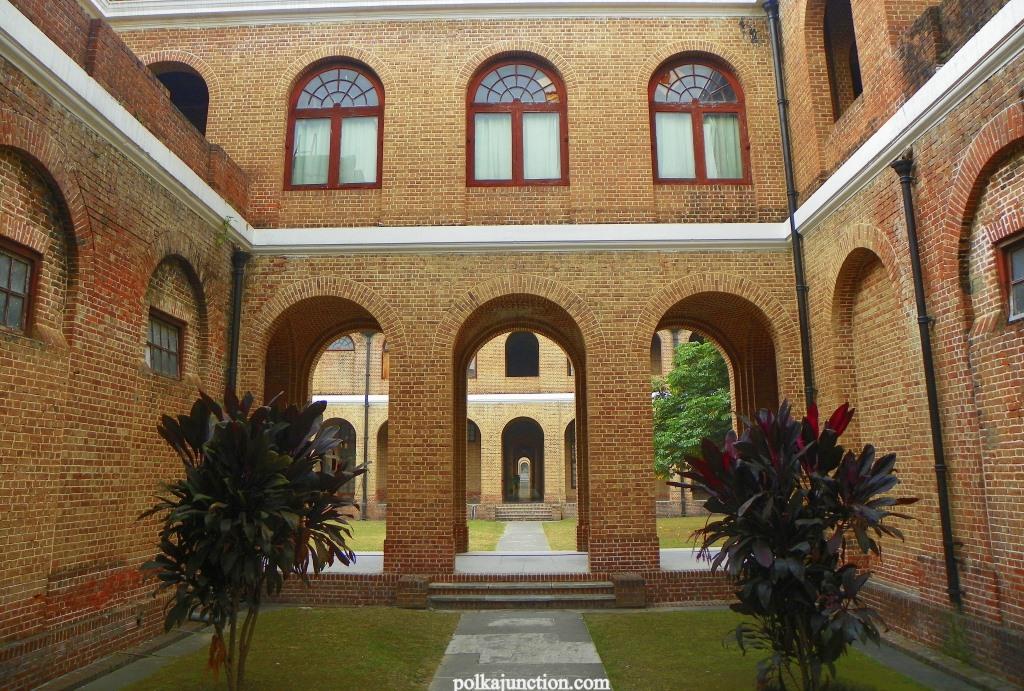 Blomfield had earlier worked with Edwin Lutyens on many projects in Delhi. Thus, the Lutyens’ touch to the Forest Research Institute’s architecture cannot be missed. In fact, I would say that the courtyards are archetypal of Indian and Oriental architecture, too. It is well known that apart from the Roman architects, the former architects also exhibited a penchant for central courtyards. The wall-less porticos are archetypal of the Roman architecture building plans. 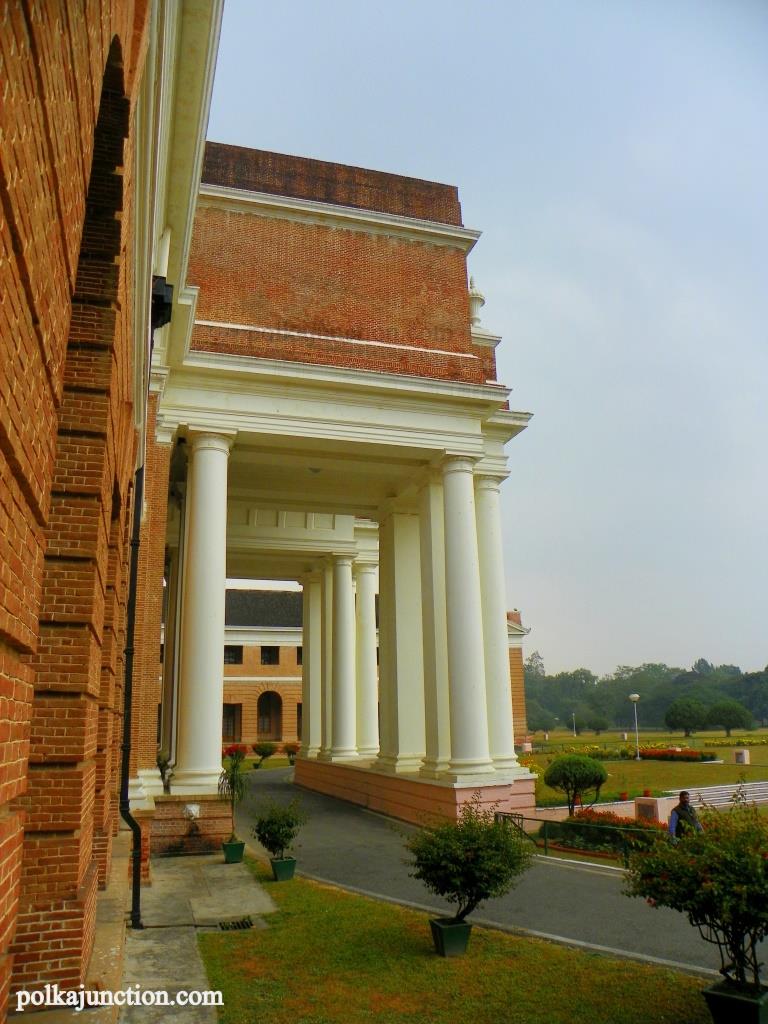 The windows on the ground floor are huge and the ones on the first floor are smaller – a typical feature of colonial architecture. This is distinctly visible from the inner courtyards. Have a look at the picture below! 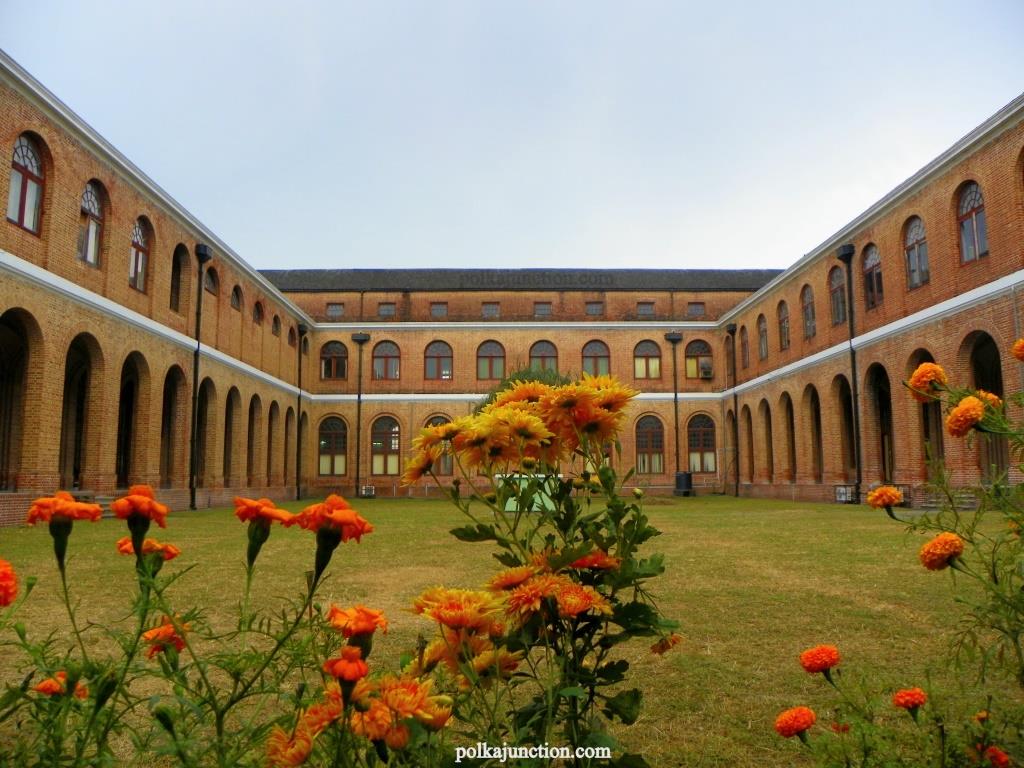 Coherent symmetry inside the FRI – A hallmark of British Architecture 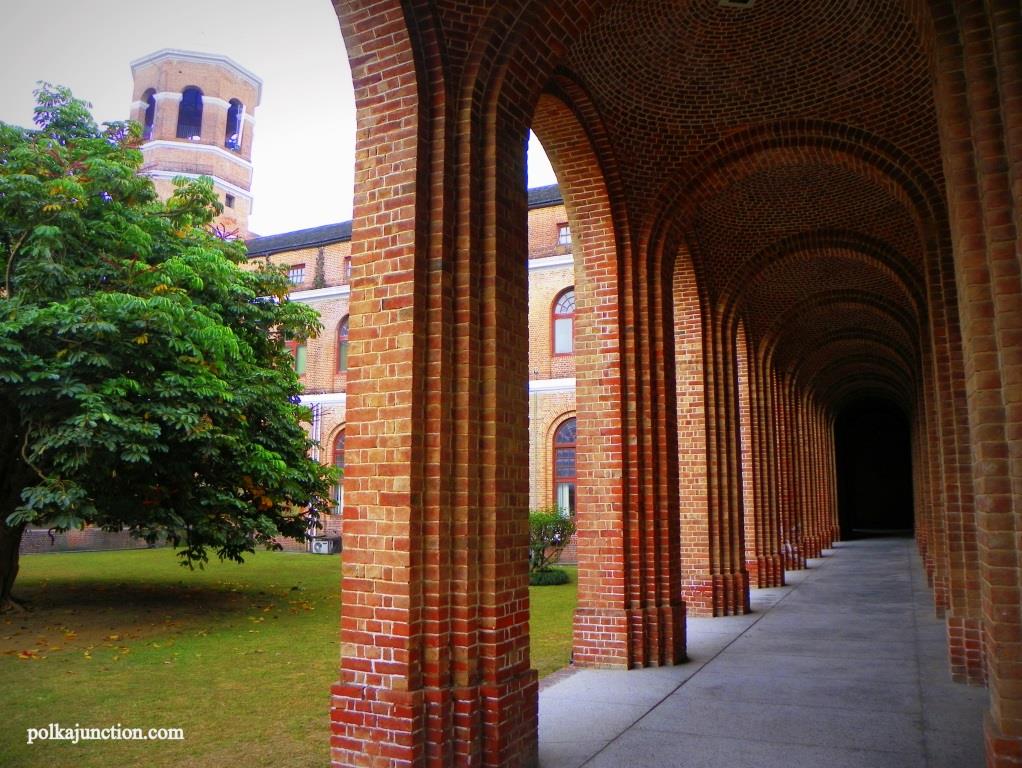 There are six central courtyards, surrounded by wide corridors on all sides. These open to various museums, washrooms and official rooms. 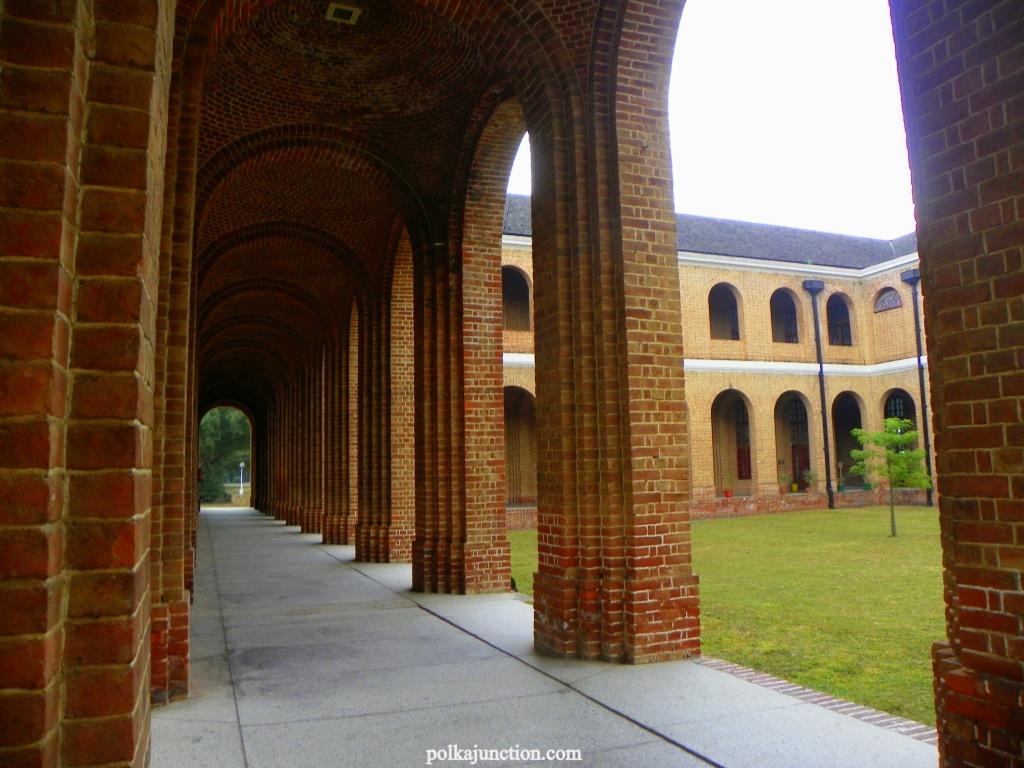 The FRI building houses six museums around its courtyards

The FRI is said to be the only humongous structure in the world made entirely of bricks, at one time. The bricks and mortar used in the Forest Research Institute’s Architecture are arranged in repetitive patterns, accentuated and punctuated by moulding strips. 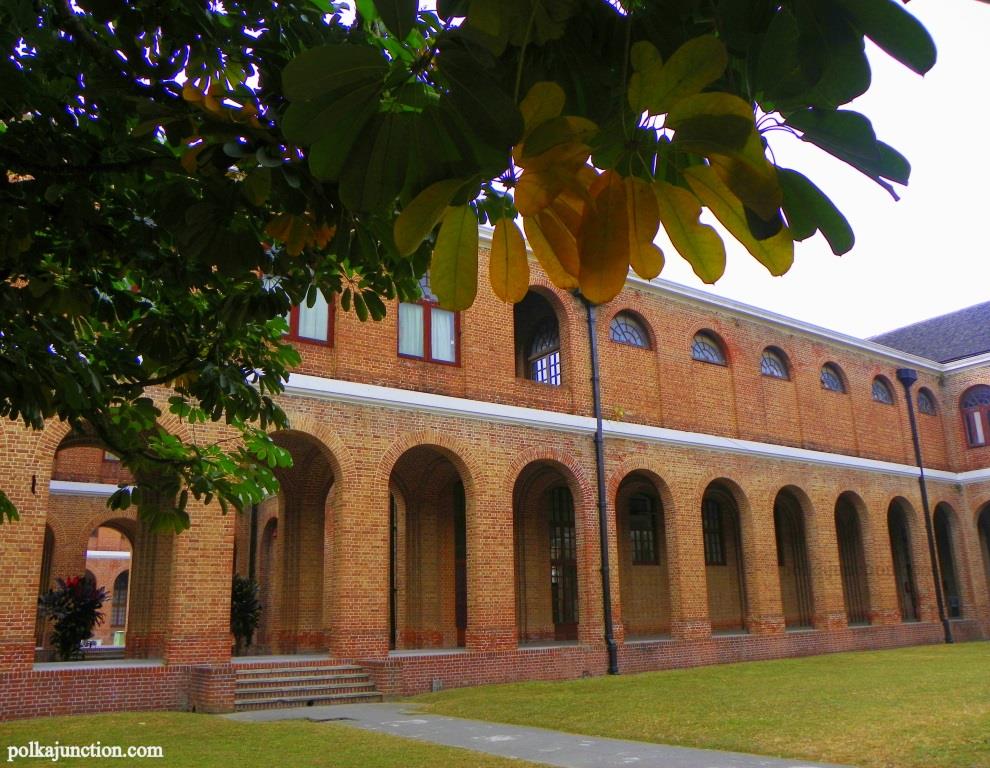 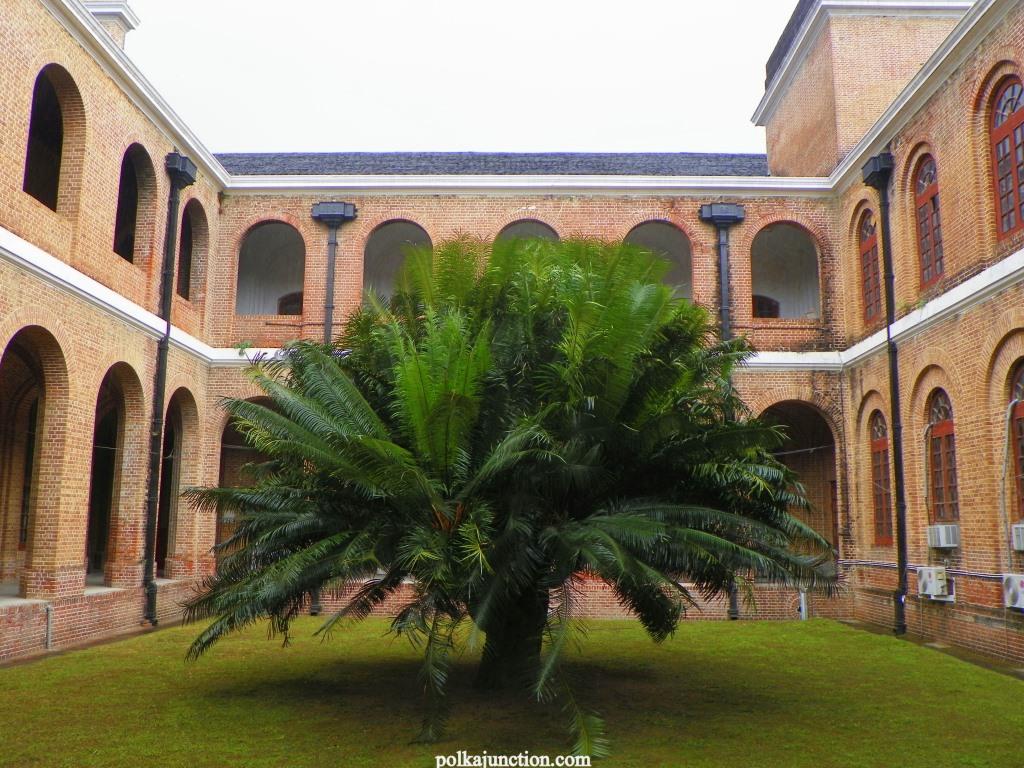 The drain pipes look rust-free and intact. I am not sure if we get such quality pipes any longer! 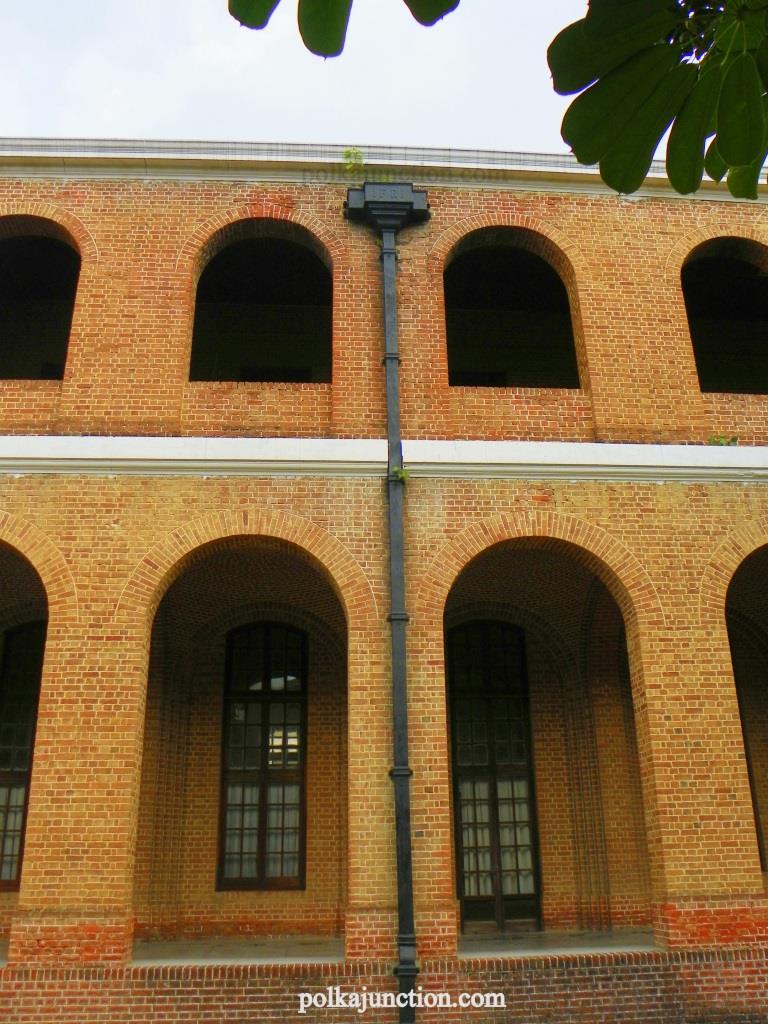 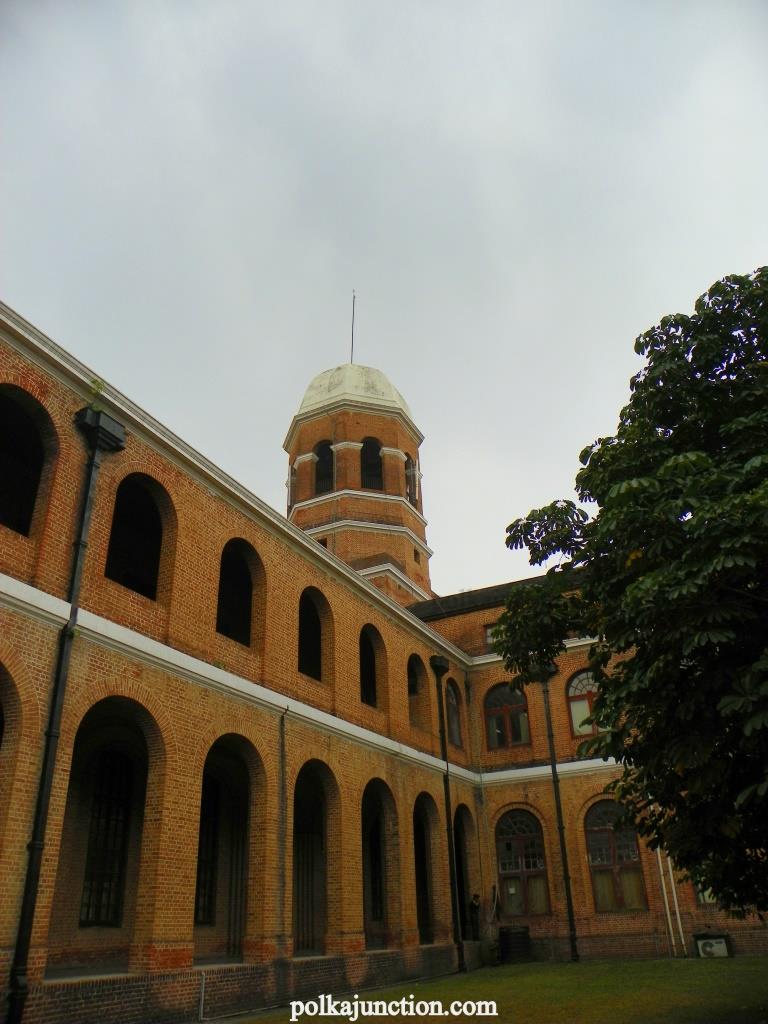 The main facade of the building is said to be almost 1,000 ft long. 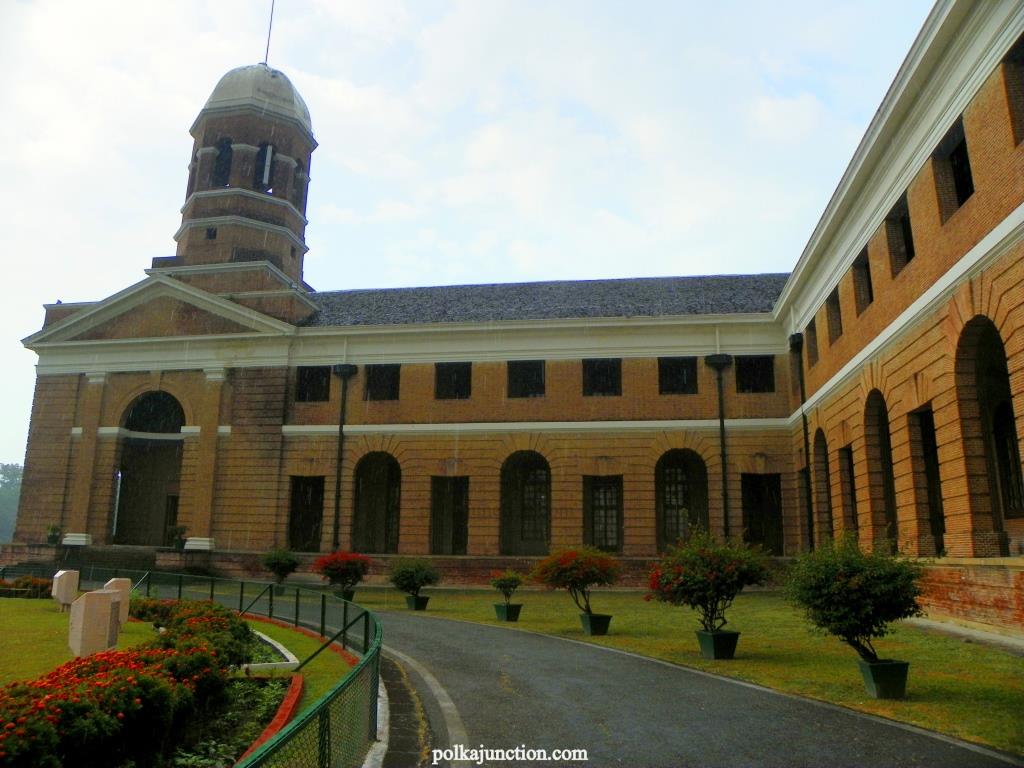 Wheat and other food crops are said to have been grown in front of the main FRI building, during the Second World War. I am sure the golden crop would have added its own hues to the Forest Research Institute’s architecture. 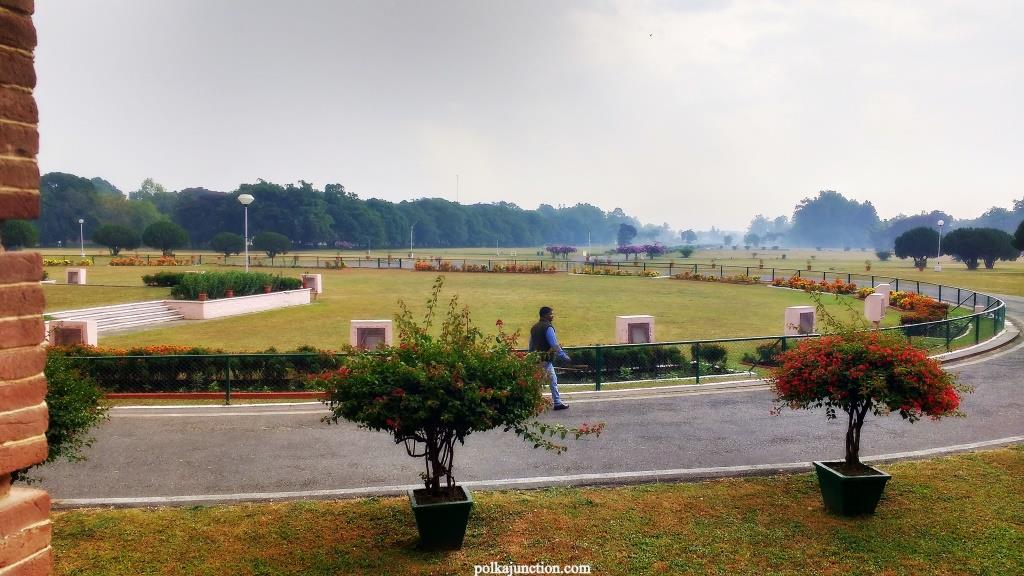 Did you know: It snowed in Dehradun in the year 1945 and the FRI premises had 3” of snowfall. 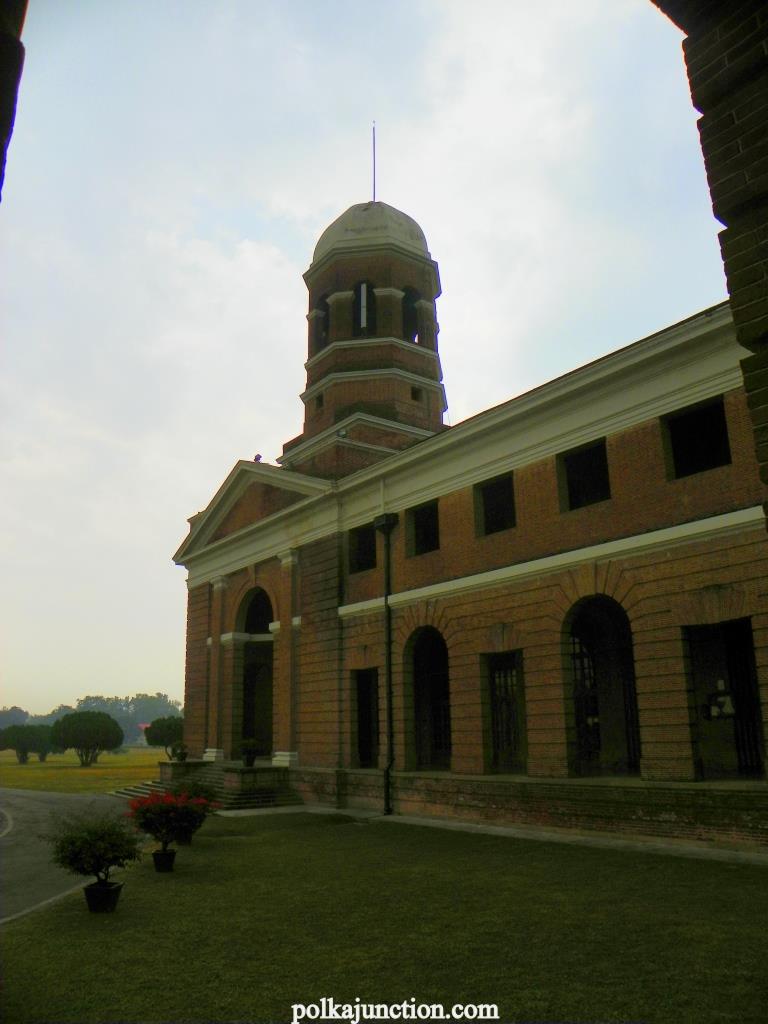 The play of light and shadow owing to the hide-seek of the sun and a light rain brought out different hues of the brick facade. The sun was behind the tower when capturing the above picture.

Whereas, the below picture looks vibrant with red bricks due to the sunlight kissing the surface of the structure! 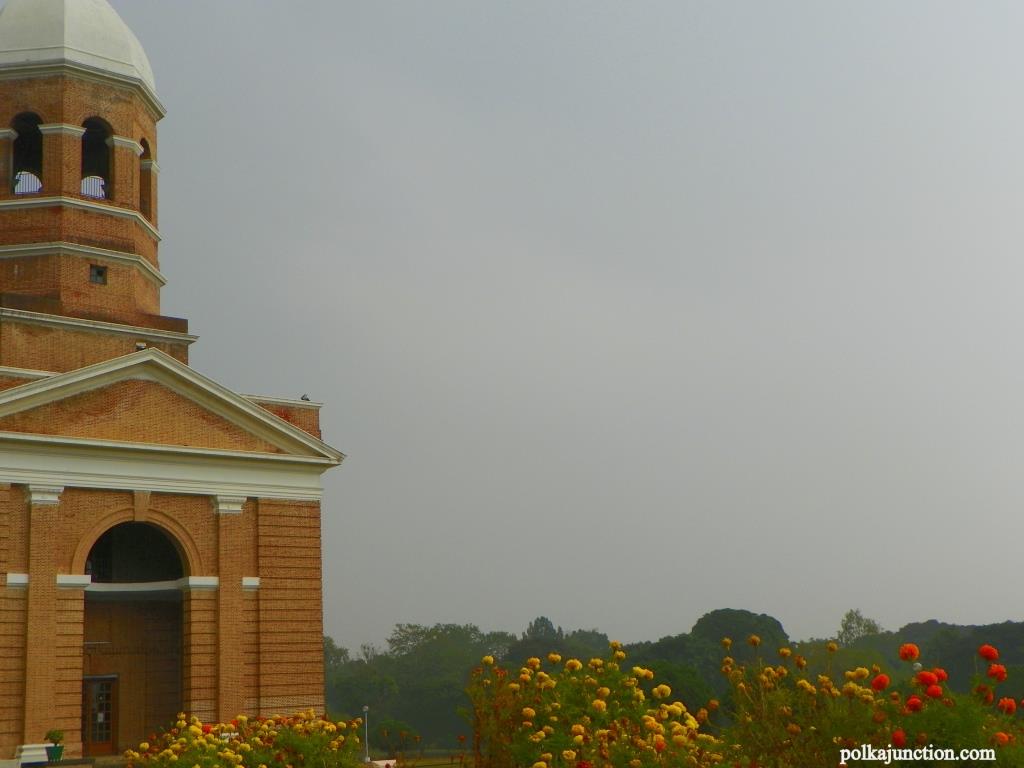 Domed towers on both sides flank the central entrance /portico. The entrance leads to the Convocation hall with beautiful and elegant wooden interiors. Inside the Forest Research Institute campus is the Indira Gandhi National Forest Academy (IGNFA). This is the staff college that trains officers selected for the Indian Forest Service (IFS). But, the convocation hall is inside the main FRI building. 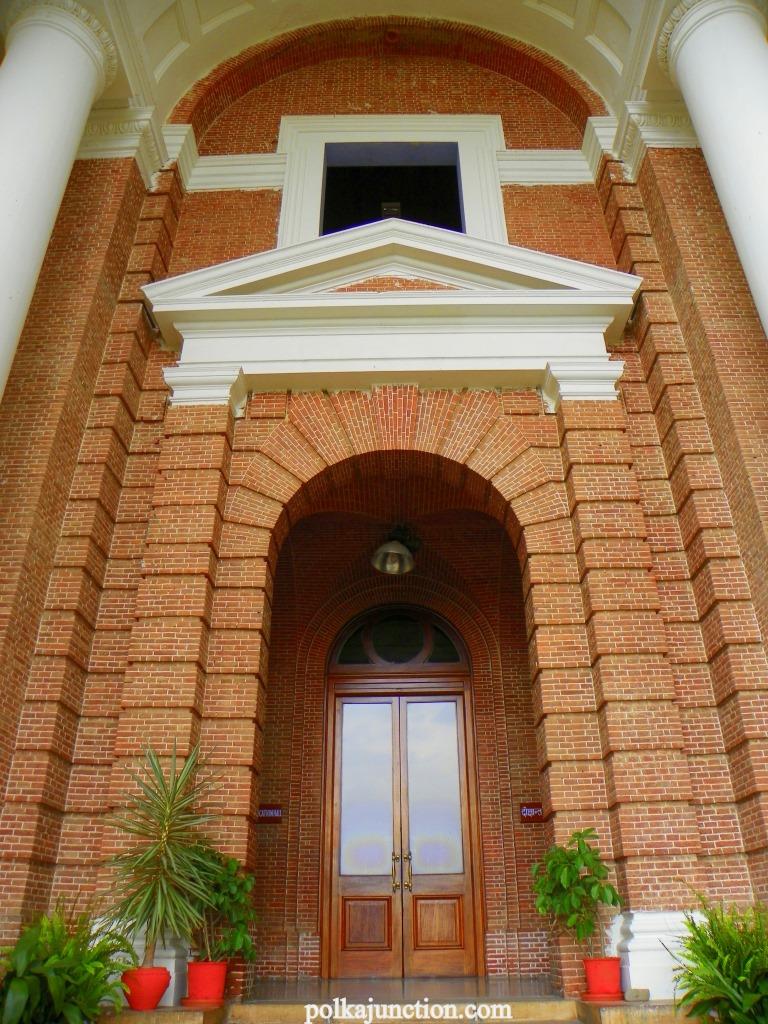 The pediment is again very typical of the classical architecture.

However, the triangular area enclosed inside the pediment known as the tympanum is plain and devoid of elaborate patterns.

Instead, some of them have an oval-shaped vent, covered with glass. I am sure a person with deep knowledge and mastery over various architectures would have shown an avid interest in the nuances of the Forest Research Institute’s architecture.His/Her explanation would be much more detailed.

Whereas, this photo tour is just through the lens of an avid lover of architecture!! 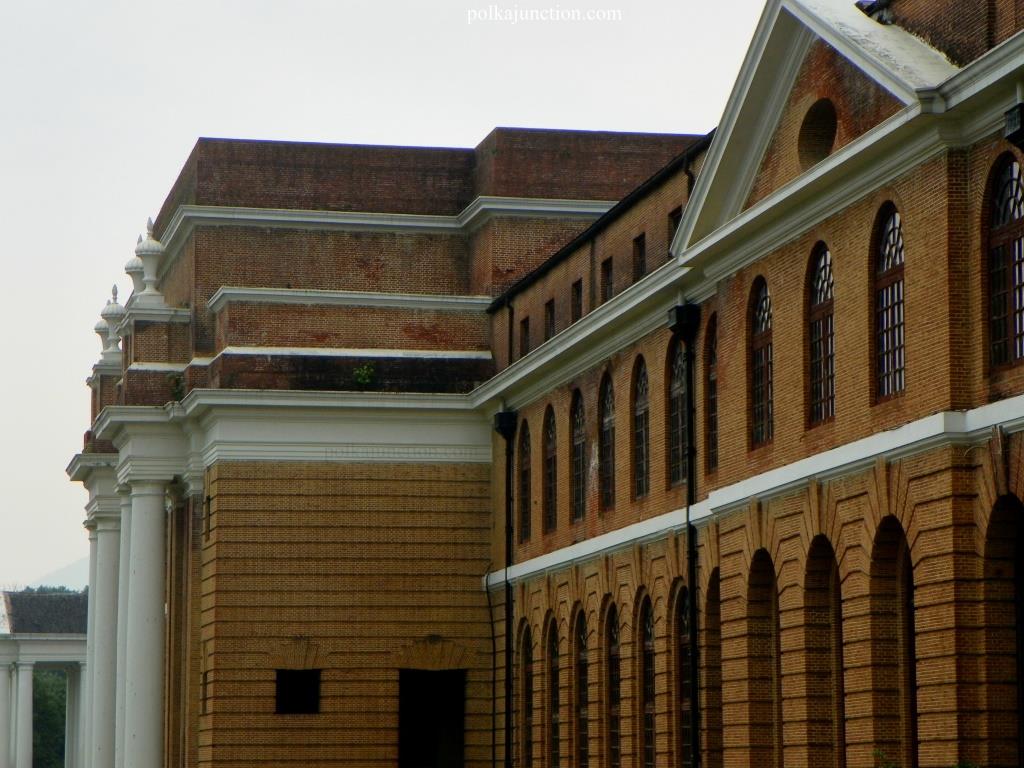 Few pointers to capture the elements of British architecture at FRI

Just as we were at the exit and I was capturing the corridor with a bench, the sun-God graciously blessed us by filling the otherwise dark corridors of the Forest Research Institute with shafts of rays that imparted an orangish hue. Bliss! 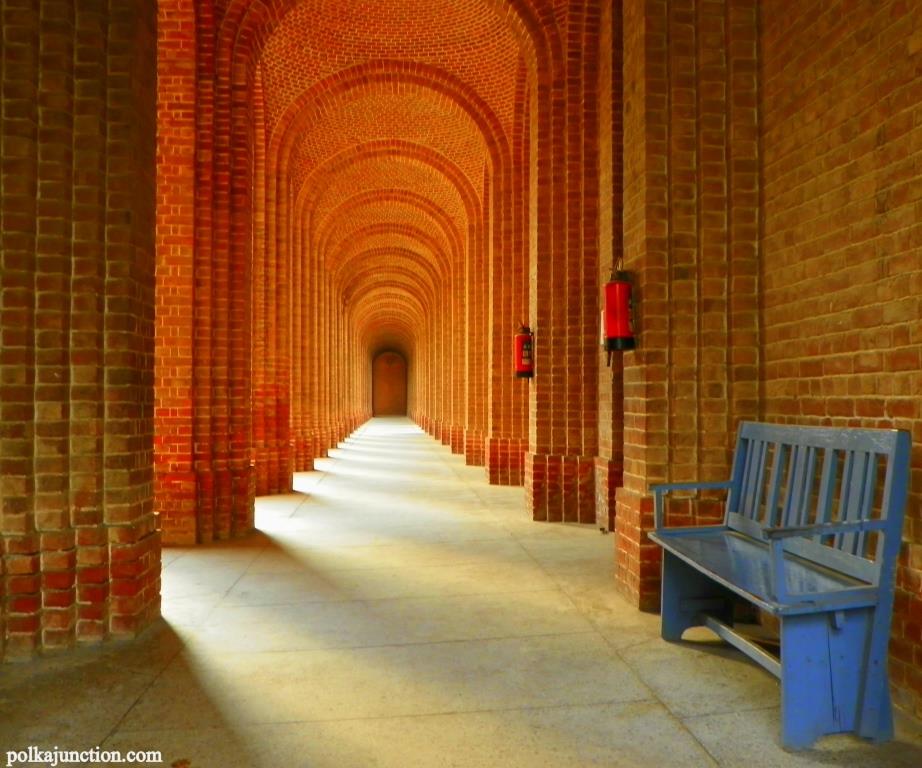 I love visiting such monumental structures of a bygone era. These visits help us to appreciate the existential connection between architectural forms of the present with the past. So, let us not litter around on the premises when visiting.

As we discuss responsible tourism, do read all about in the blog-post Carbon Offsetting- Everything you need to know

In fact, during a stroll in the forest of FRI, I was appreciating the futuristic thinking of the architects in providing well laid out floodwater drains across the estate and peeped into one. And, what I found was appalling! 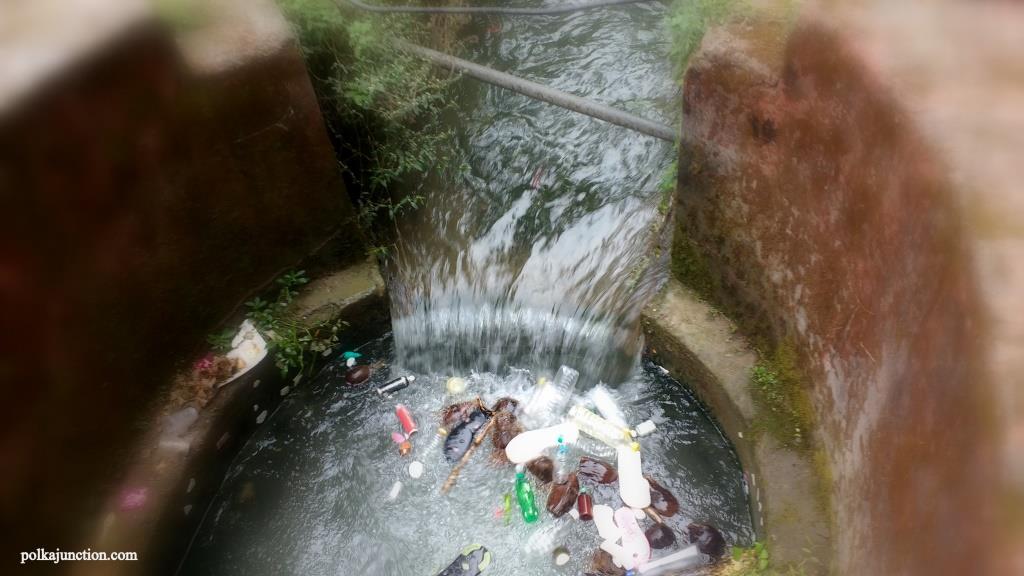 I leave you with this thought of being responsible for our environs and a few more photographs of the beautiful Forest Research Institute of Dehradun and its immaculate British Architecture. 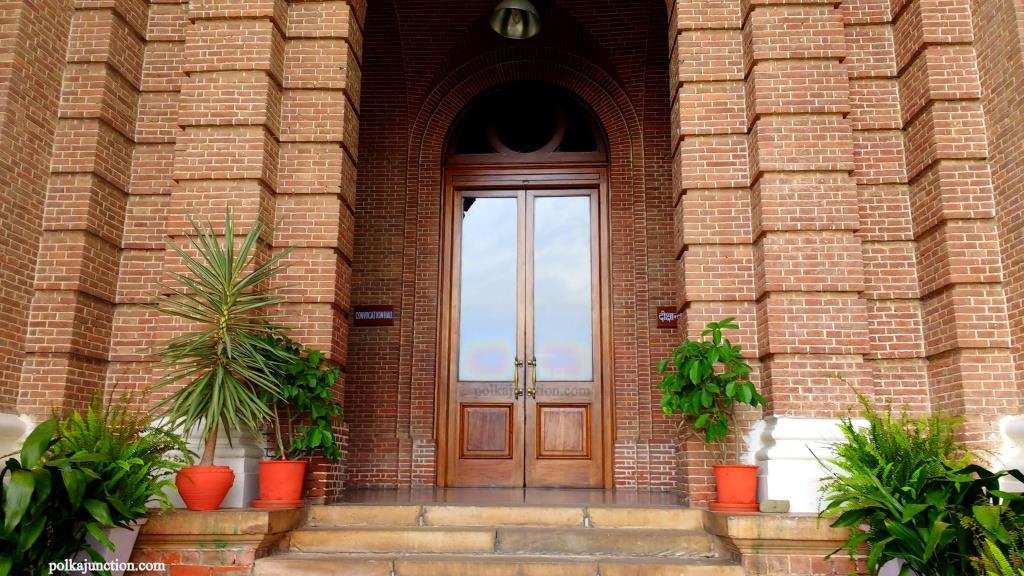 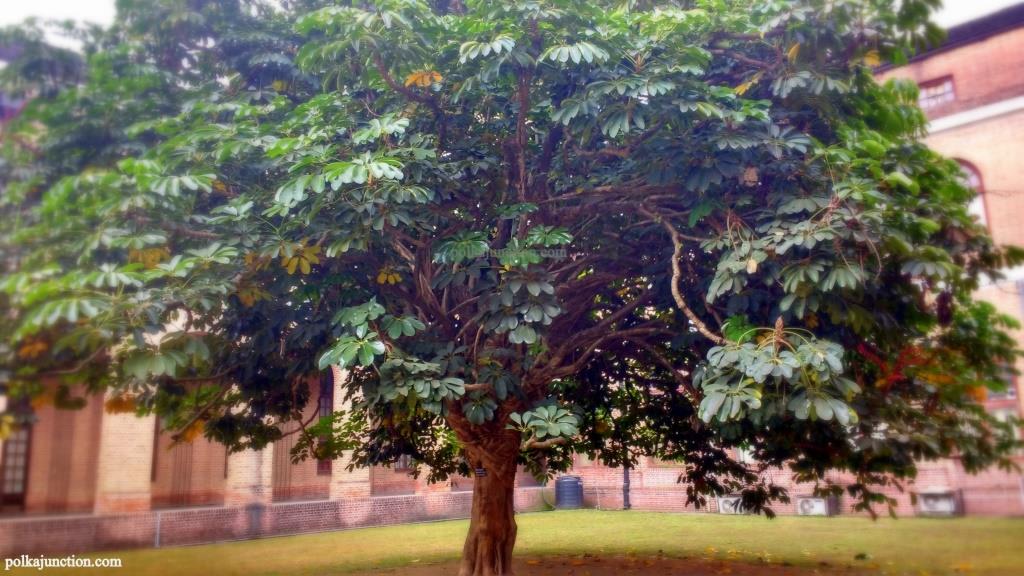 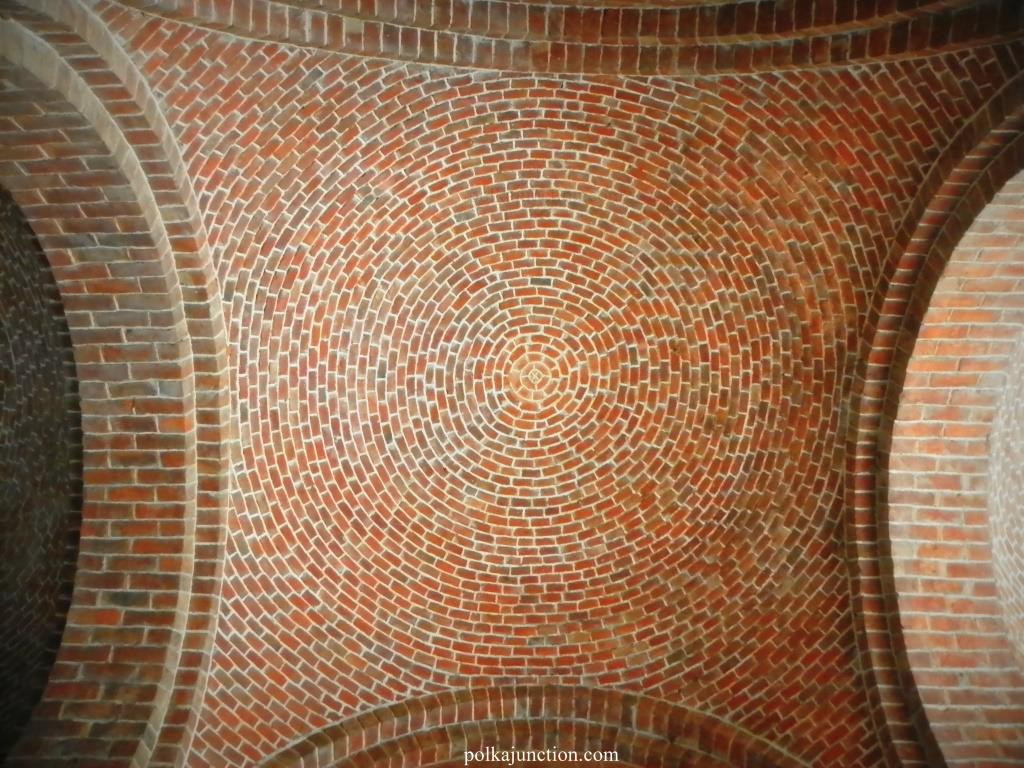 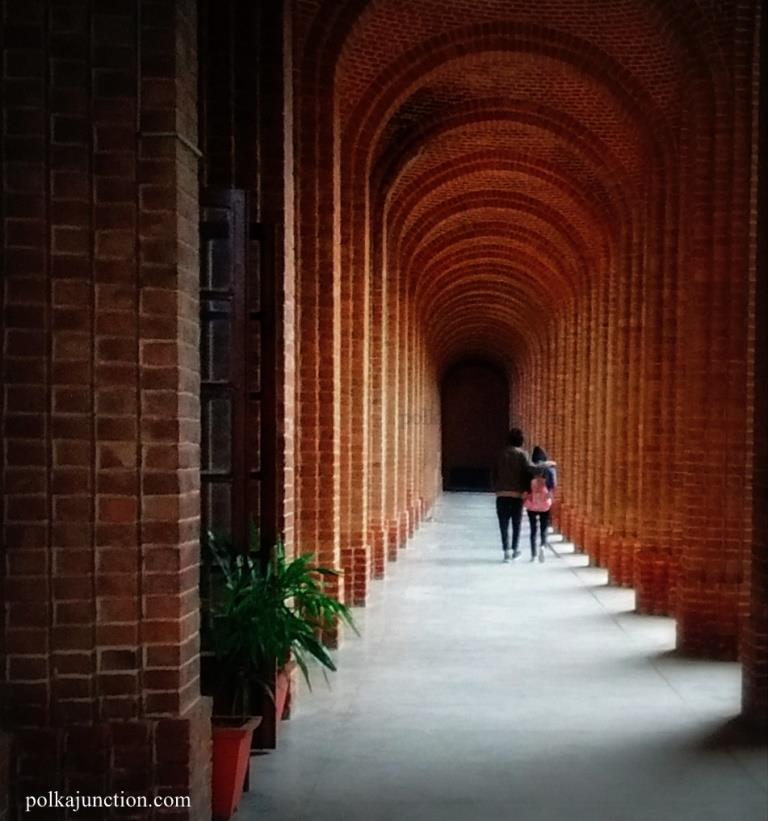 How to reach the Forest Research Institute in Dehradun

Timings to visit the FRI building

You may also make use of the Guide map available on the FRI site during your visit.

Let me know your thoughts on this photo tour of the Forest Research Institute’s Architecture as well as the use of British Architecture in its design and construction. I hope you enjoyed this virtual trip! 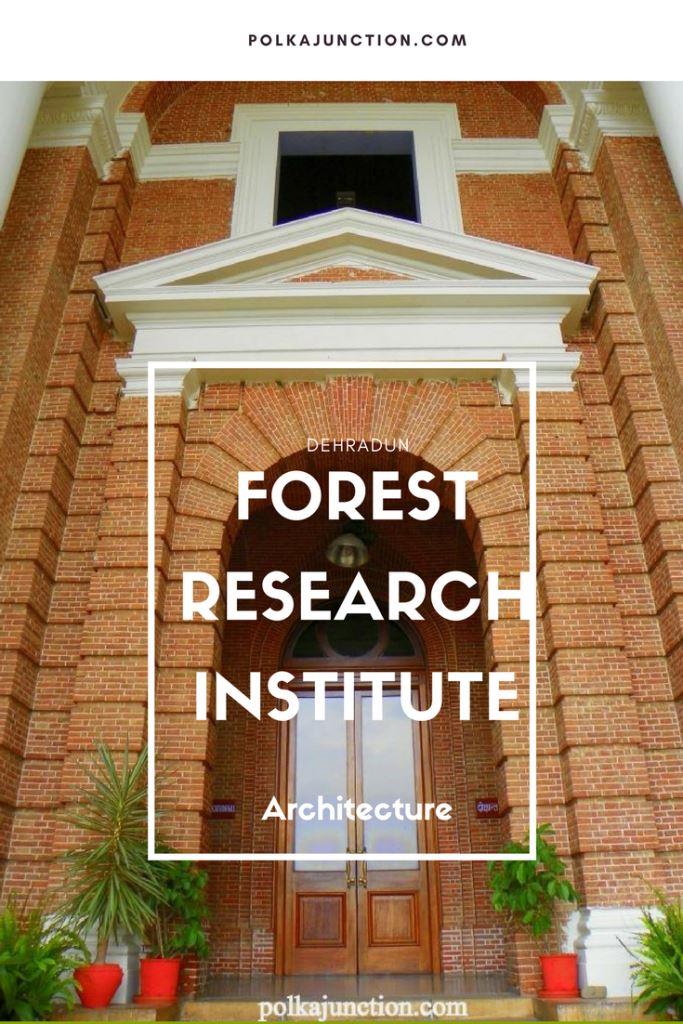