“Climb mountains not so the world can see you but because you can see the world.”

I love escaping into the wilderness of the mountain ranges. The snow capped mountains of Himachal are very special. They humble me with their magnificence , reverberate positive vibes and engulf the wanderer in me with their benevolence.

During our stay at the picturesque Dalhousie, I always looked for an opportunity to trek the unexplored trails. One such trekking trail for which the mountains of Dainkund is famous is the revered Paouloni Mata (Goddess) route. The whole route offers spectacular views of the snow-capped Dhauladhar and Pir-Panjal ranges .It geographically divides the states of Himachal and Punjab.

A tourist intending to start this trek, gets dropped at the footsteps (by your guides/drivers) of the 3kms long trail (one-way distance) .The path is wide and steeper at the beginning with few steps and then flattens and narrows as we move up.This trail passes through the woods- home to innumerable pines, oaks and deodhars. During the monsoons, you can find gurgling streams gushing through the narrow paths down the slopes. In winters, these mountains experience very heavy snowfall.

Whenever we used to wander in the mountains, we always took the path that the locals trudge. The view offered from this side of the mountains is jaw-dropping. One gets a glimpse of more than 100 hamlets scattered across various hills from here, as and when the weather clears.

A trek for all seasons

During the months of May-June, there are a million blooms of white daisies and other colourful flowers all over these mountain slopes enthralling the travellers and trekkers. When the weather clears the glittering waters of Beas, Ravi and Chenab flowing across the plains of Punjab are visible too.

The floating clouds keep caressing the skin, inviting you to be a spectator to a game of ‘hide and seek’. The peekaboo contest is always between the sun and the earth. Its the clouds behind which the sun hides and teases the beings on earth. The best season to view this spectacle is June-September

This trek is very popular among the tourists coming to Dalhousie as one walks along the ridges of the Pir-Panjal range and gets to view the opalescence of the Dhauladhars, on the other side.

The weather in the mountains changes drastically. A minute before, you may feel the hot sun blazing away and the very next moment the clouds come floating and suddenly there is a downpour. Does not matter if it is Summers or Winters!

The advantage of trekking in the hills is that you don’t tend to feel tired, owing to the balmy climes. The boards en route on this trek encourage the pilgrims to keep going and reassures that the destination is nearby. As this trek is very popular, one can find groups of devotees flocking to these hill-locks from near and far. On special occasions, the atmosphere here is electric and capturing, amidst the chants of ‘Jai  Mata Di’ praising the Goddess. 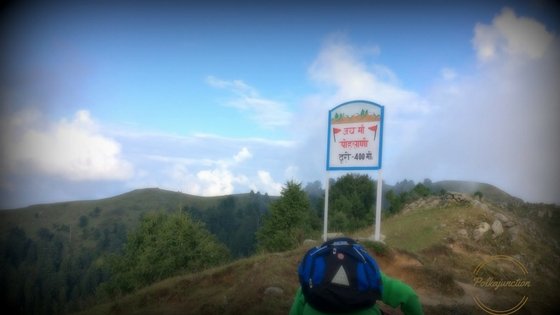 As one nears the hillock on which the Goddess resides, a view of the saffron blocks indicating the temple premises is bound to fill the pilgrims to keep going and reach the altar of the Goddess. The view is vibrant with the saffron blocks flocked by grassy slopes of the hills under a canopy of the blue sky! 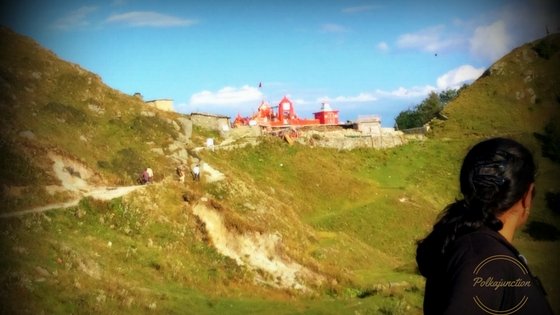 Upon reaching the premises of ‘Pouloni Mata’ temple, a sudden rush of happiness and excitement fills the devotees, as the realization of completing the pilgrimage sets in. A glimpse of the Goddess and the Trishul (Trident) against the backdrop of Dhauladhars is so magnetic that one feels like staying there forever. 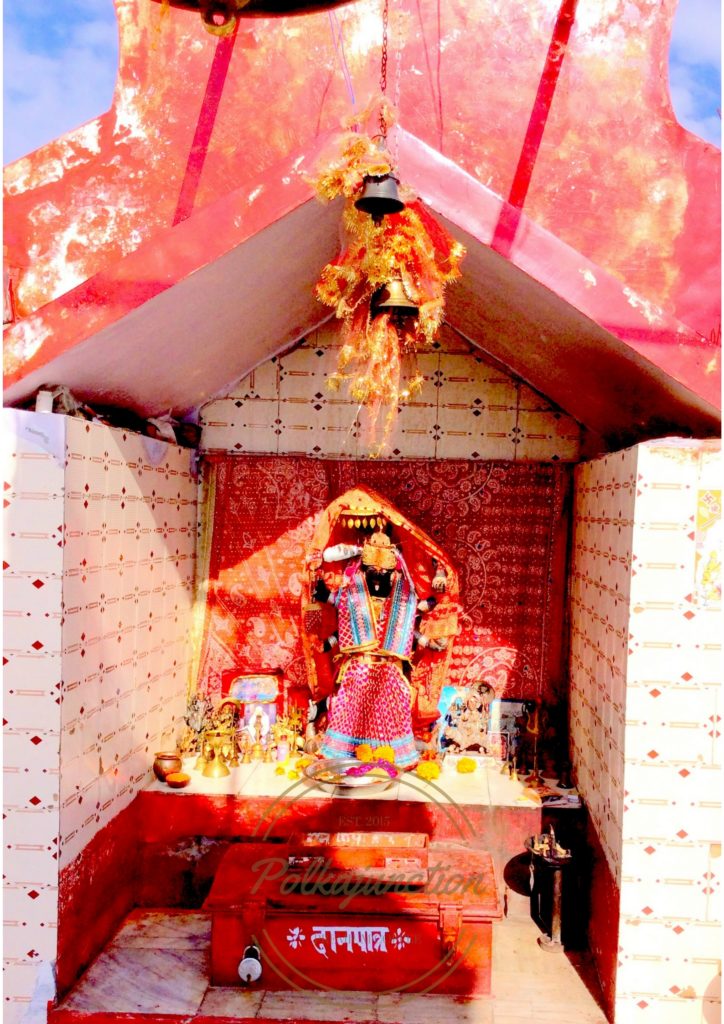 On many occasions, the devotees have tried to build a shelter for the Goddess and every time it was blown away by the winds. Hence, you will not find a proper Temple structure shielding the Goddess.Instead, the Goddess has been shielding the mountains and its inhabitants. 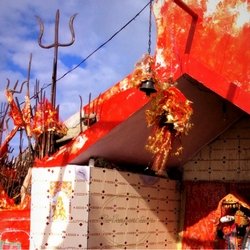 Ardent devotees bring Trishuls to be offered to the temple. Behind the saffron structure there lies a path from where one can view the Dhauladhars and also catch a glimpse of the Manimahesh peak ( Honestly, all the peaks looked the same to me .So, I really never got to know which one was Manimahesh) On a particular side, you will find a sign on the wall, informing about the viewpoint to Manimahesh.(as in the photo below) 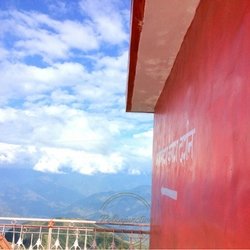 Nice to be Responsible

Just beside the temple premises a statue of a Goddess wearing a garland of skulls has been instated on a mountain slope. None are allowed to climb this, as the locals warn against dire consequences. There are no information boards prohibiting this climb. However, it is our responsibility to respect the sentiments of the locals and also better to be safe, isn’t it? 🙂 Also, avoid littering the place. 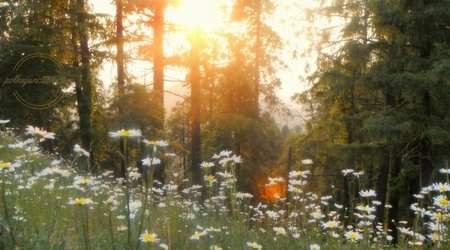 Our family has always packed lunch and hopped over these mountains to visit the temple and offer our prayers. Once done, we used to sit on the verdant slopes with our picnic basket. Menfolk! Nothing is more soothing than lazing away, sluggishly over the slopes after a sumptuous meal, while your wife keeps a vigil, isn’t? This is exactly what I ended up doing… keeping an eye on my kiddo (this area is prone to bears and other wild animals) while hubby snored away to glory! Sigh…… 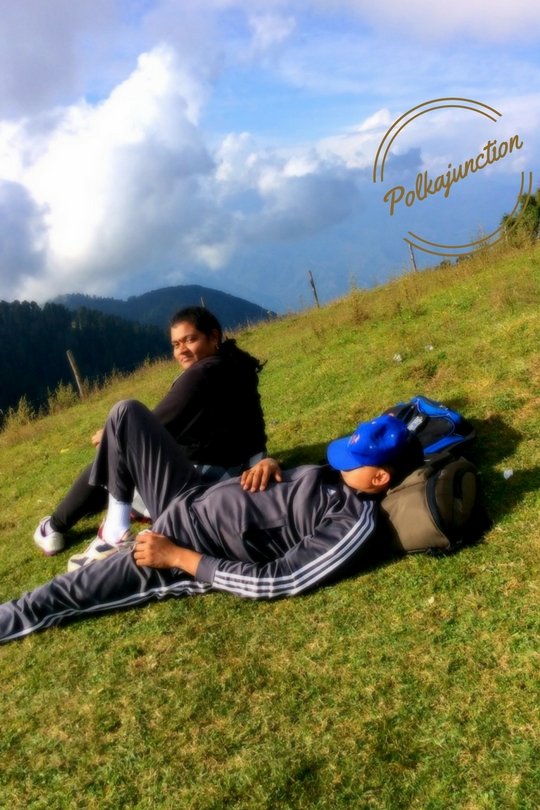 We never ever get bored of this trek. We have done this some 5-6 times that I feel at home among these mountain ranges. We play as a family, spend hours together – many times gazing silently at the faraway rivers on one side and the lofty mountains on the other side and then leave reluctantly as the sun starts to bid good-bye. 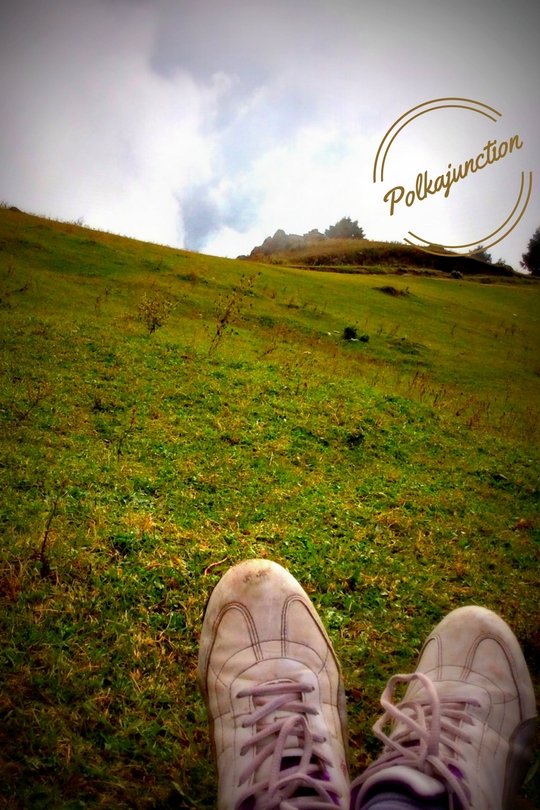 ‘Pouloni Mata’ trek is indeed a perfect getaway for paying obeisance to the Goddess – who is the protector of these hills, followed by some quality family time enjoying the bounty called ‘Nature’ protected and preserved by the same Goddess! Indeed, its a Vibrant India…

As I wind up on this trek, I am reminded of the vibrancy of India in its architecture, sculptures, doors and archways. Can it be as colourful as this trek? Or is it going to look pale in comparison to the vibrancy displayed in this post? Watch out this space for more, as you are flown from the hills to the plains across ‘Vibrant India’ on polkajunction…..Ciao

6 thoughts on “Enchanting trek across DK”