I was composing a blog-post on the mesmerizing Bhool Bhulaiyya of Lucknow and was reminded of our trek from Dalhousie to Dainkund and return, across the Singing Hills of Chamba in Himachal Pradesh, India. The path through the woods was haphazard, brimming with possibilities of getting lost and gave us a sense of accomplishment upon reaching the destination, yet, it was beautiful. Similar to the labyrinth of the Bada Imambara!

Listen keenly as I take you on a virtual musical trek across the Singing Hills of Dainkund. Sensitize yourself to the hardships faced by these villagers so that you could help them when you actually visit these mountains, mingle with the fluttering flies, dance with the forest snakes, and get smitten by the pristine wilderness across this trek, as I share with you all my memories of this exploration across Dainkund.

The Singing Hills of Dainkund

Yes. The mountains of Dainkund near Dalhousie in Chamba District, are also known as the Singing Hills. They are so-called as the trees here produce melodious sounds. No, these aren’t some special trees endowed with supernatural powers. But, trees that produce a feeble yet melodious whistling sound as winds blow past the woods, ruffling the perennial leaves of the numerous pine, oak and deodar trees.

Trek from Dainkund to Dalhousie – Know the terrain and its people

This leaf from my collection of travelogues is an account from one of our picnics nearby the hills of Dalhousie, when we chanced upon a path leading through the woods of Dainkund Hills. 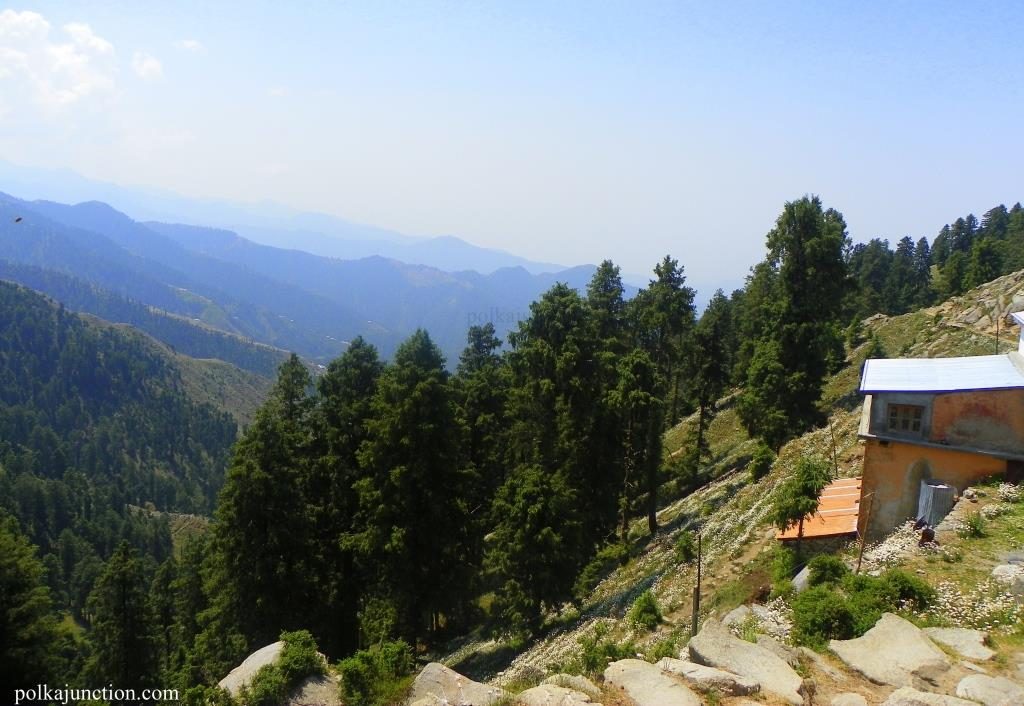 During that weekend sojourn, we were wandering around the hills of Dainkund and stumbled upon a pebbled path leading towards the only biggest concrete house as far as our eyes could see. The house was literally on the edge of a cliff!

A Shop on the cliff off Dainkund and other stories

Upon approaching the house-like structure, we were relieved to find that it was an ‘all-in-one’ shop dishing out hot chai, parathas, yummylicious milk sweets, and also stocked grocery items. After ordering some Chai (Tea) we hit upon a conversation with the house owner. He introduced himself as Atma Ram and informed us that he has been living there for decades. Atma Ram’s shop alone caters to more than 35-40 villages scattered in the hills! 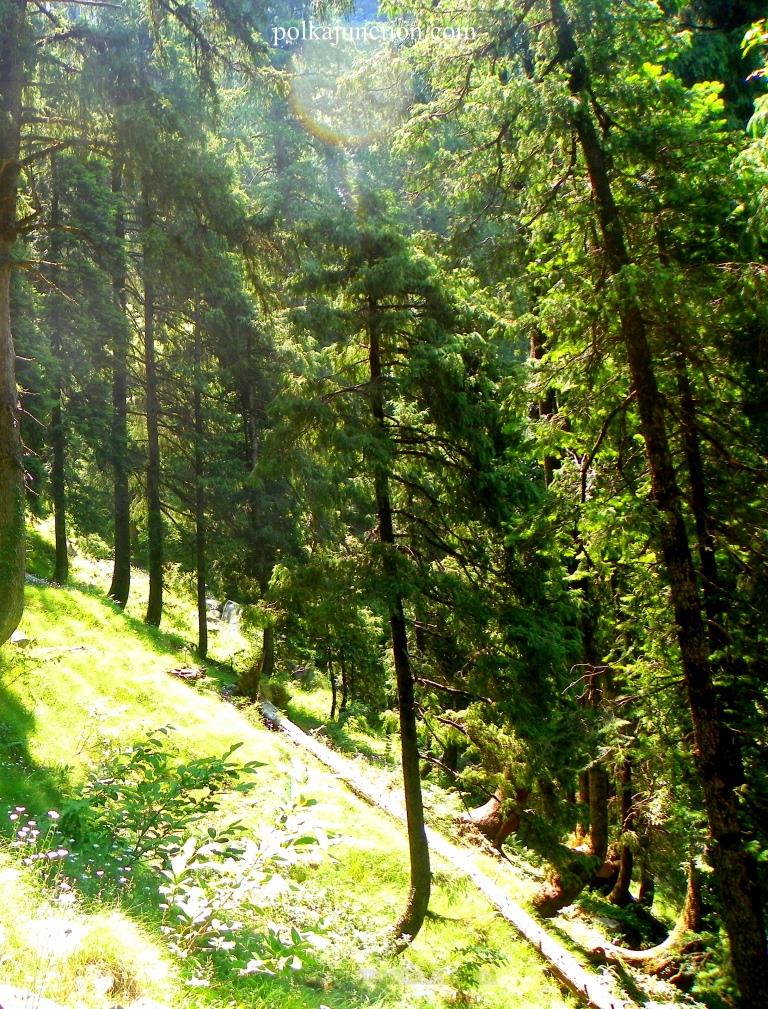 Most of the villagers from nearby regions climb the hills through treacherous trails passing through the forests of Dalhousie and the surrounding hills, to buy the day to day necessities as these remote hamlets lack the road connectivity.

At regular intervals throughout the year, the Dalhousie Airforce Station conducts health camps in these villages, wherein a medical team caters to the health needs of at least a handful of villages. One of these villages has also been adopted by the Indian Air Force. Usually, in the case of a fire or a medical emergency, the people of both Dalhousie and Dainkund immediately call the Airforce Station, even before informing the local authorities. Thus, reaffirming the trust and bond between the people of the region and the defence forces.

After some more exchange of stories and information, we were guided by Atma Ram to take the trail through the woods and reach Aala — a place that houses the Potato Development Farm and is en route Bakrota. Basically, he suggested us to opt for a path running across the Singing Hills, instead of taking the motorable road from Dainkund to Aala. This path is frequented by the people of the villages and is a shorter and faster route, and also perfect for a short trek from Dinkund to Dalhousie.

June is the best month to go on treks in the mountains of Pir Panjal. There are infinite blooms of white daisies everywhere resembling the milky way on earth — butterflies fluttering and hopping from one bloom to another often crowding the forests similar to the mosquitoes that crowd our cities! What a contrast, isn’t it? 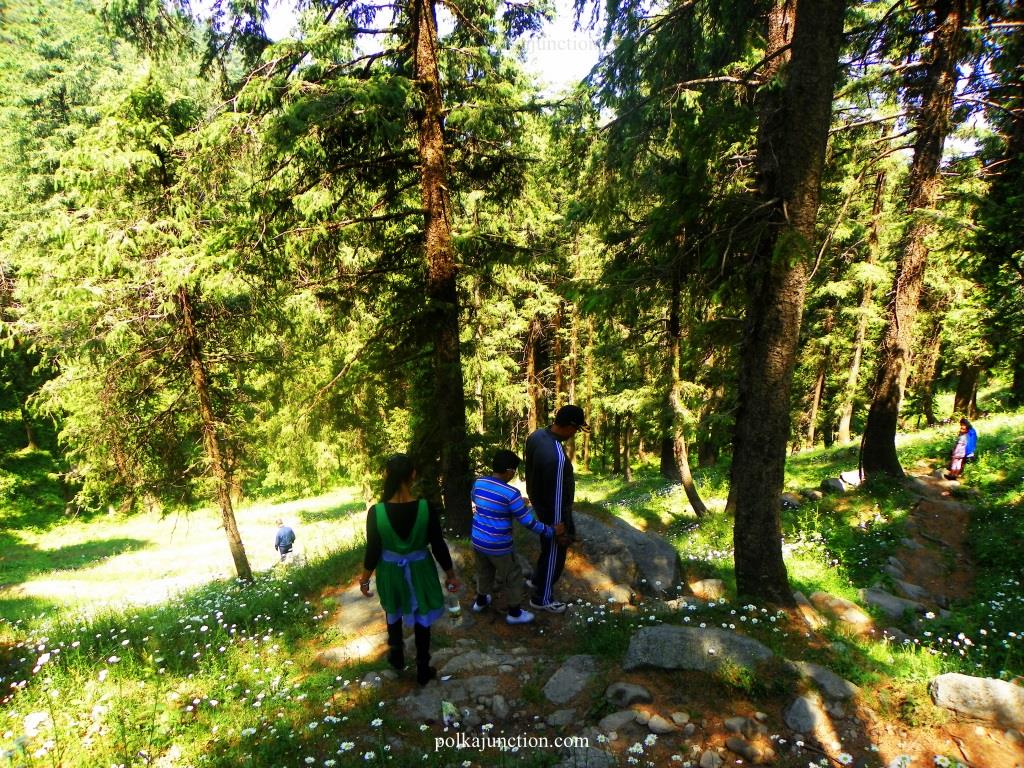 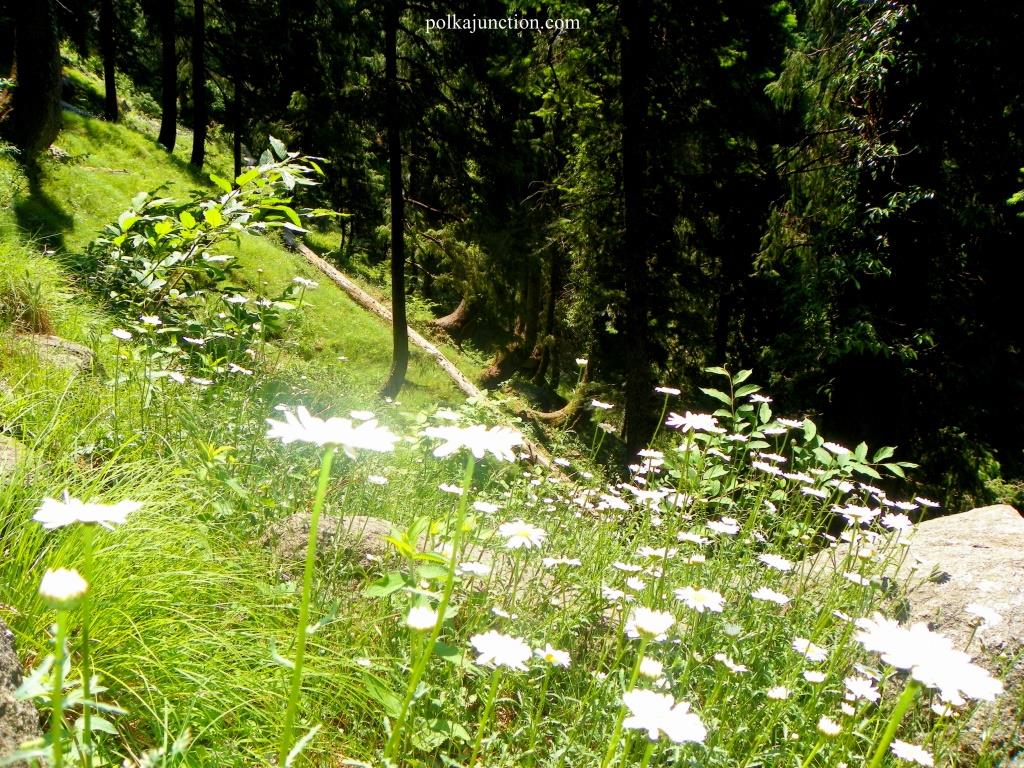 The buzzing bees, the occasional roars (err.. was it of the bears or the snow leopards or the witches of DK that inhabit these hills?), the lush greenery made for a perfect jungle view. We had loads of beetles, ladybirds, innumerable insects, and wild blooms to give us company. They seemed to be going through their daily errands without much fuss!

There were times when I stopped, allowing the group to move ahead – to seep in the fresh, dewy, and moist smell of the woods. Stopped, while the cool breeze caressed my cheeks. Took breaks often, to look back at the path trudged. Because not every day will I get to spend so much time amidst nature, inhaling pure oxygen! 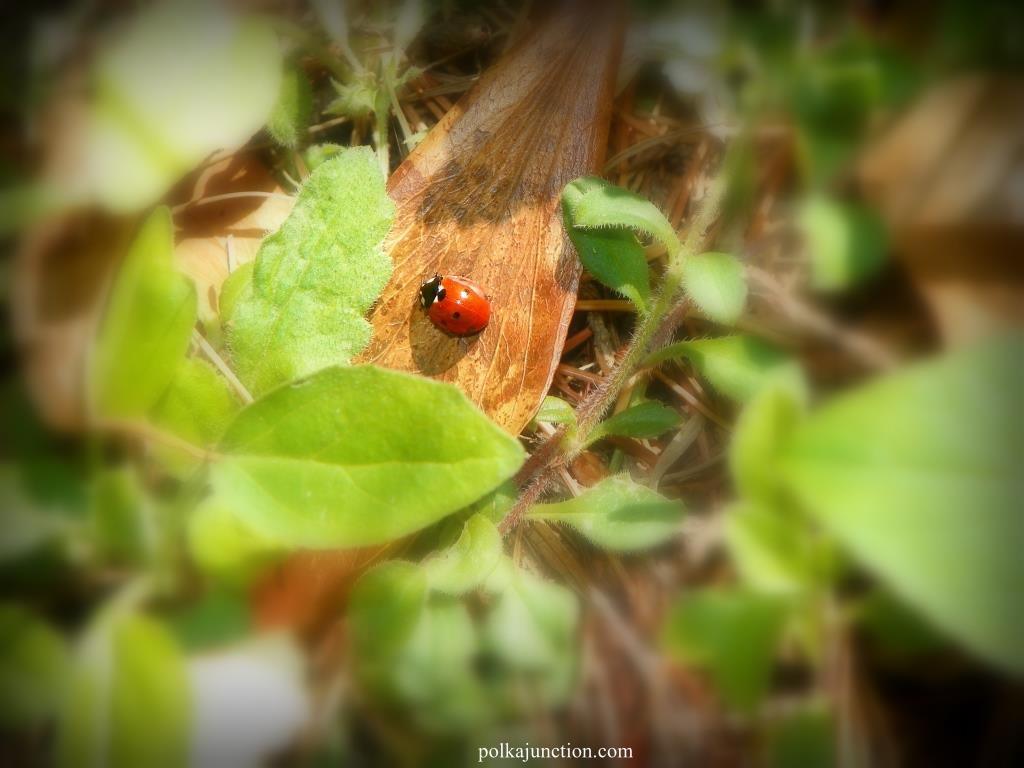 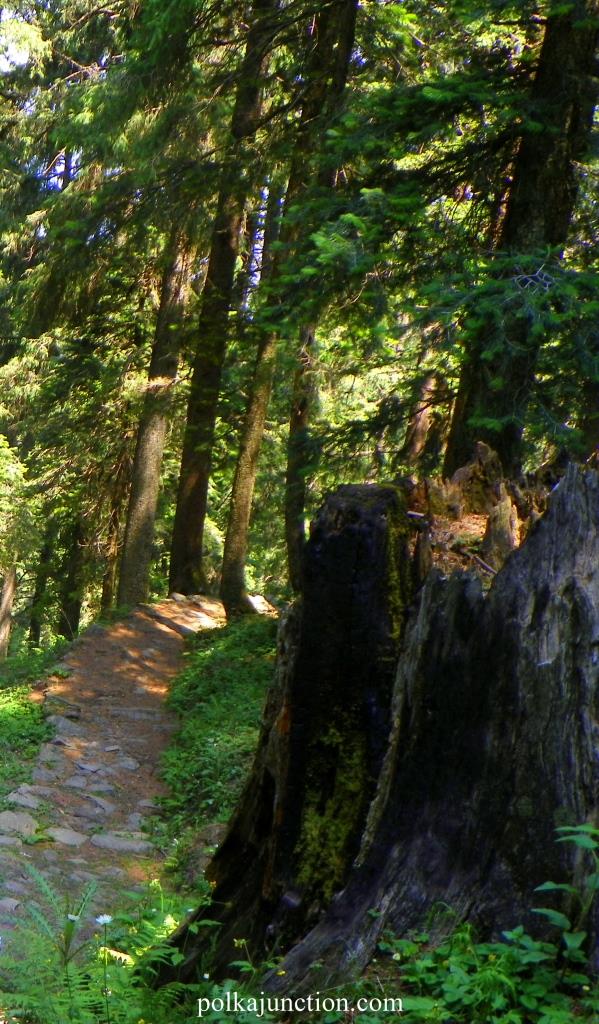 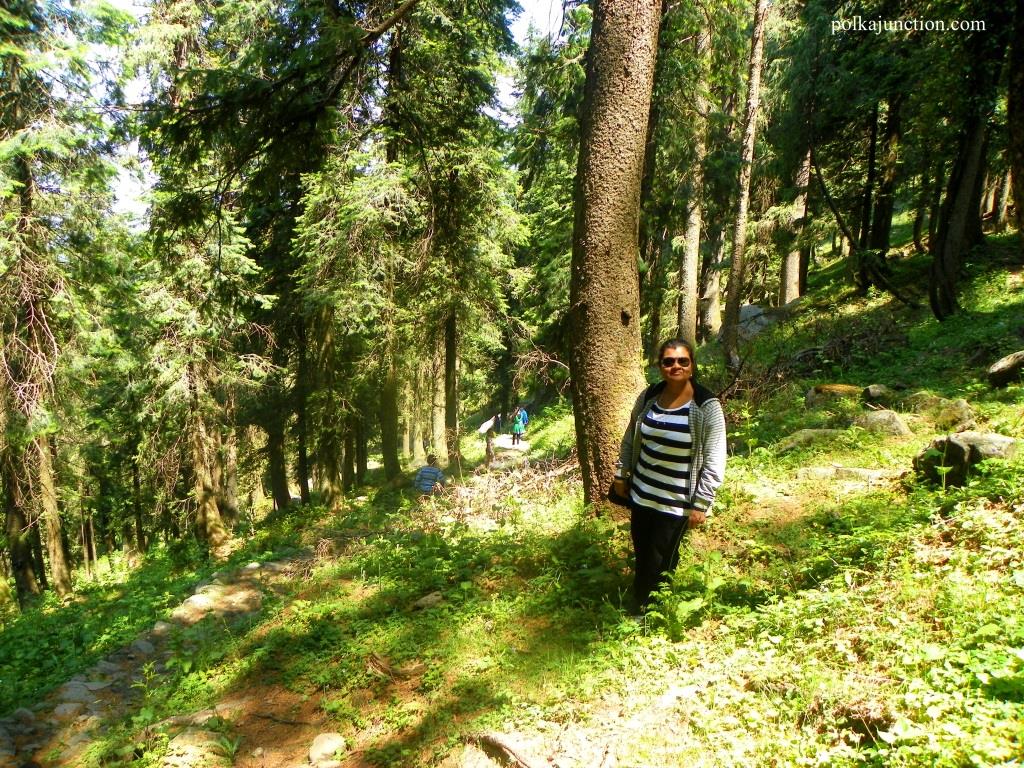 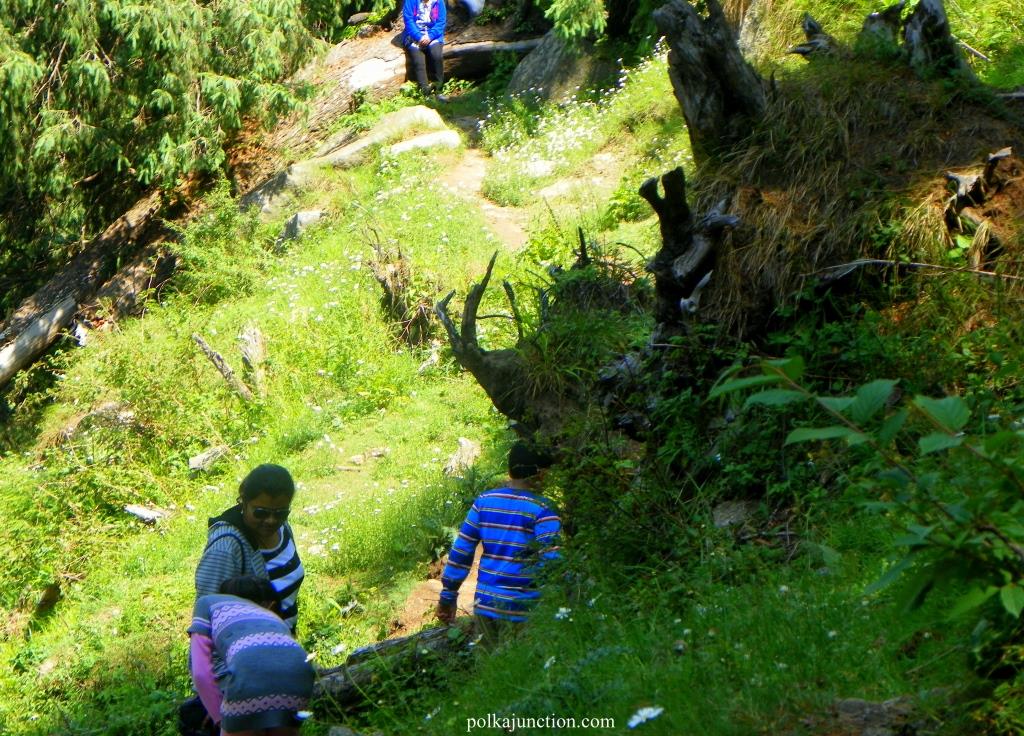 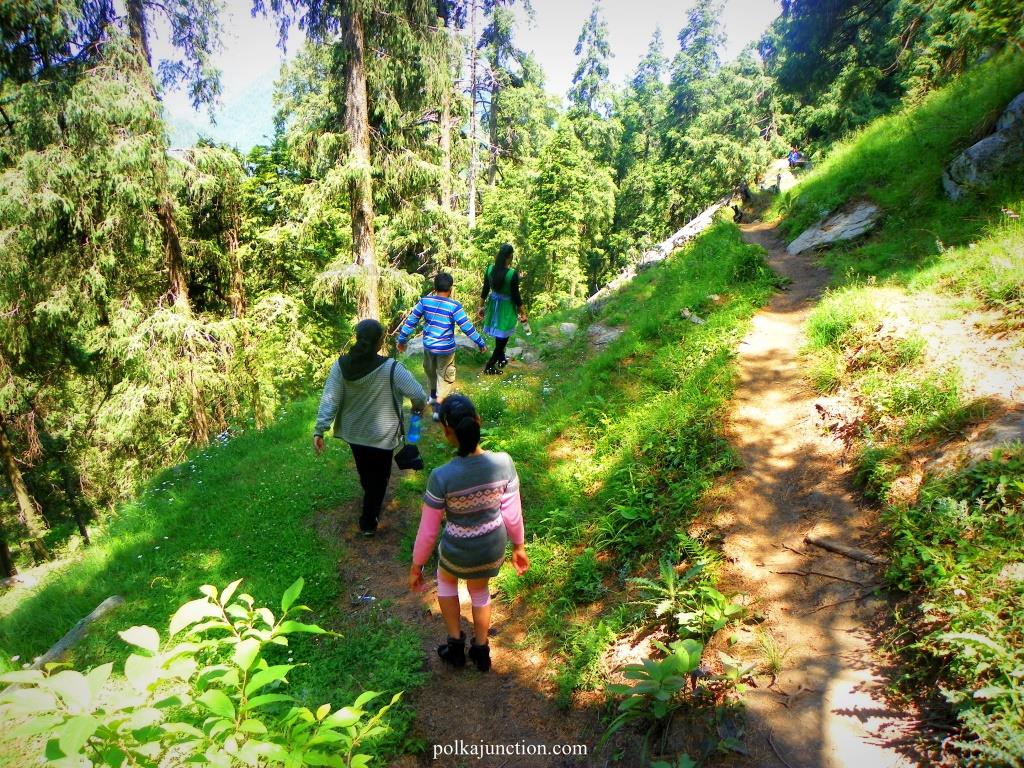 Snakes of the Singing Hills of Dainkund and Dalhousie

While we were walking diligently, my eyes fell on something that looked like the hood of a snake! Upon alerting others, the men of our group cautioned us to stay where we were, while they went nearer to the ‘snake’ for a confrontation. Snake charmers? hmmm.

We had a hearty laugh upon discovering that it was a sort of flower/plant. Upon reaching home, a quick google search informed that it was a rare plant called the ‘Cobra Lily’ found mostly in parts of Himachal and the Himalayas. So much for me donning a Sherlock hat. Sigh! 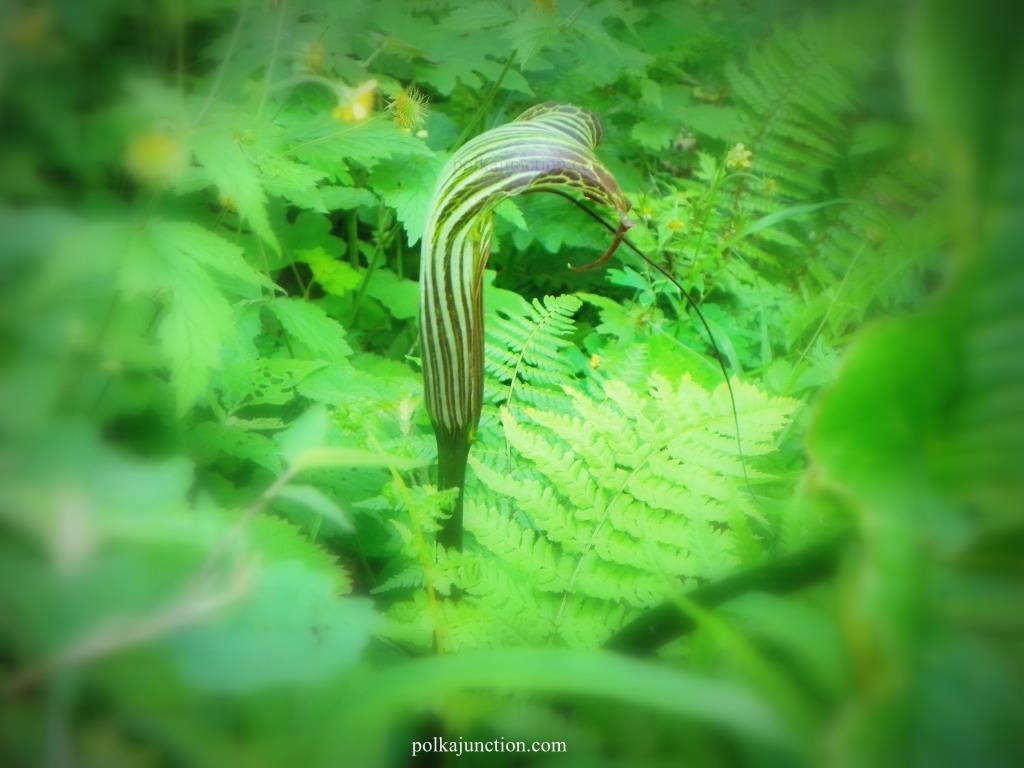 Our paths were lined with little budding flowers and wild berries that looked more like strawberries. Everything around seemed to be swaying in sync, as winds swept across making the unmissable hissing sound. The snake flowers too started swaying to the tunes of the snake charmer- the wind, in this case! 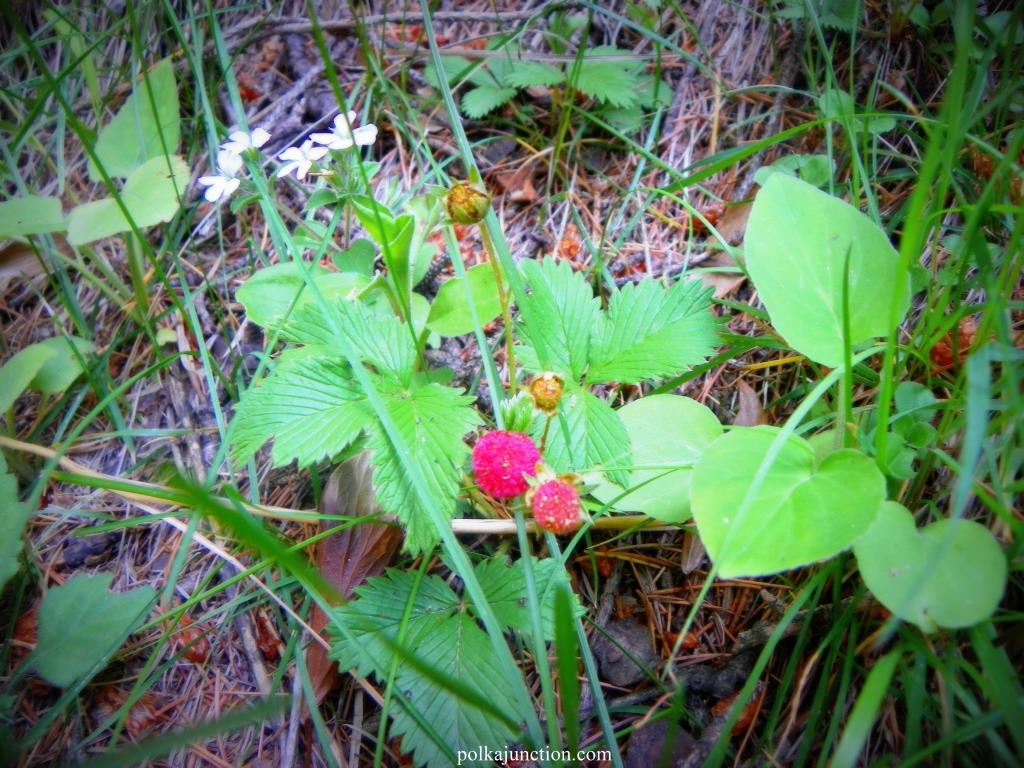 The tall trees with huge trunks among the verdant greenery, looked, straight out of Ruskin Bond novels and European literature. 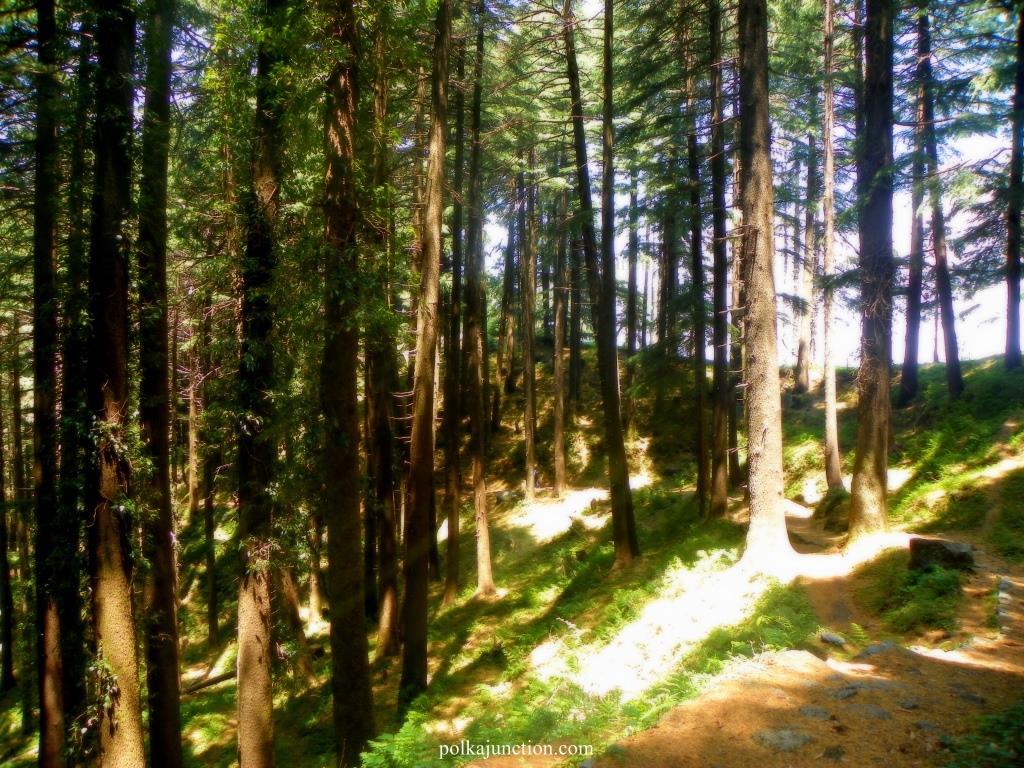 Soon, we almost neared Aala and could see the beautiful green hills of Bakrota that were once home to Rabindranath Tagore, and Moti-Tibba — where the brave freedom fighter Subash Chandra Bose had once stayed from afar. These mountains were canopied under a blue sky, draped in the mist stretching down from Dainkund to Dalhousie.

Read about this Bengal connect of Dalhousie 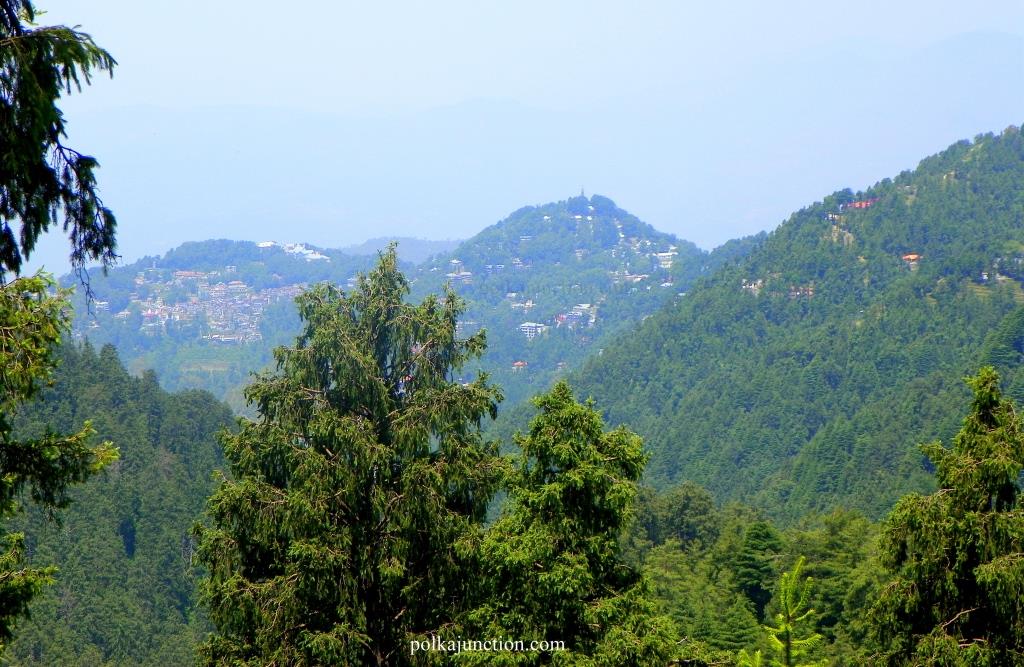 We were thrilled to reach our destination — Aala. Realization set in when we had a look at the watch. This trek usually takes 30-40 mins downhill, however, we had taken more than an hour ( up-climb would be around 60mins).

The blame was on me! I was taking my own sweet time to capture the woods, our moments in the Singing Hills, and the experiences of the trek from Dalhousie to Dainkund and return, to be engraved as fond memories forever. In this pursuit, I was either lagging behind the group or way ahead of the group exploring on my own. 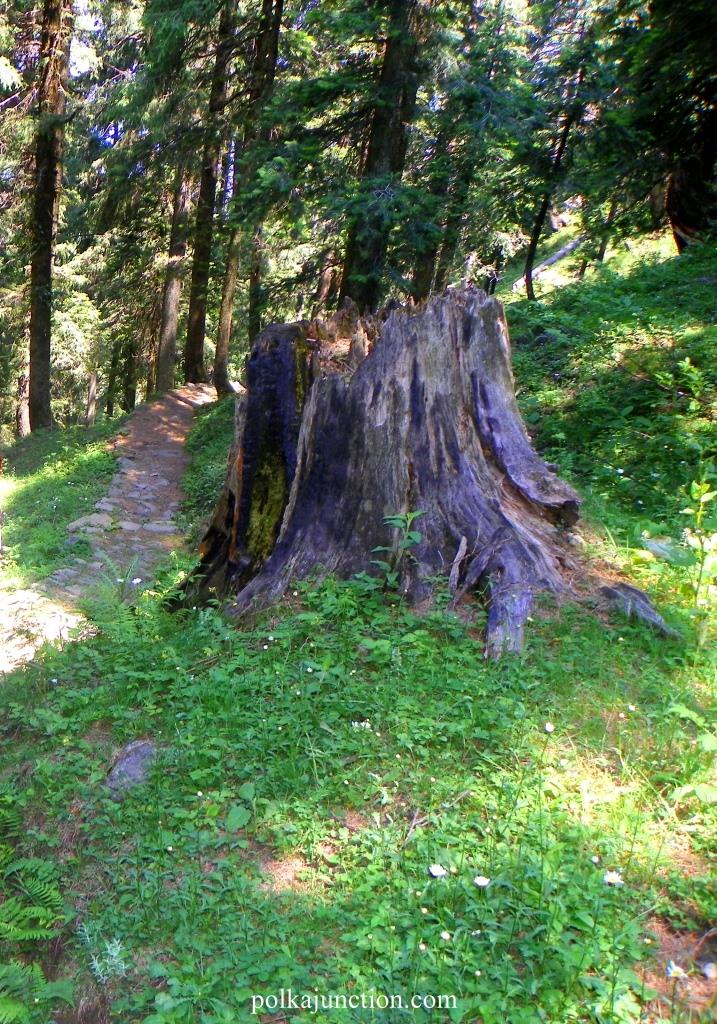 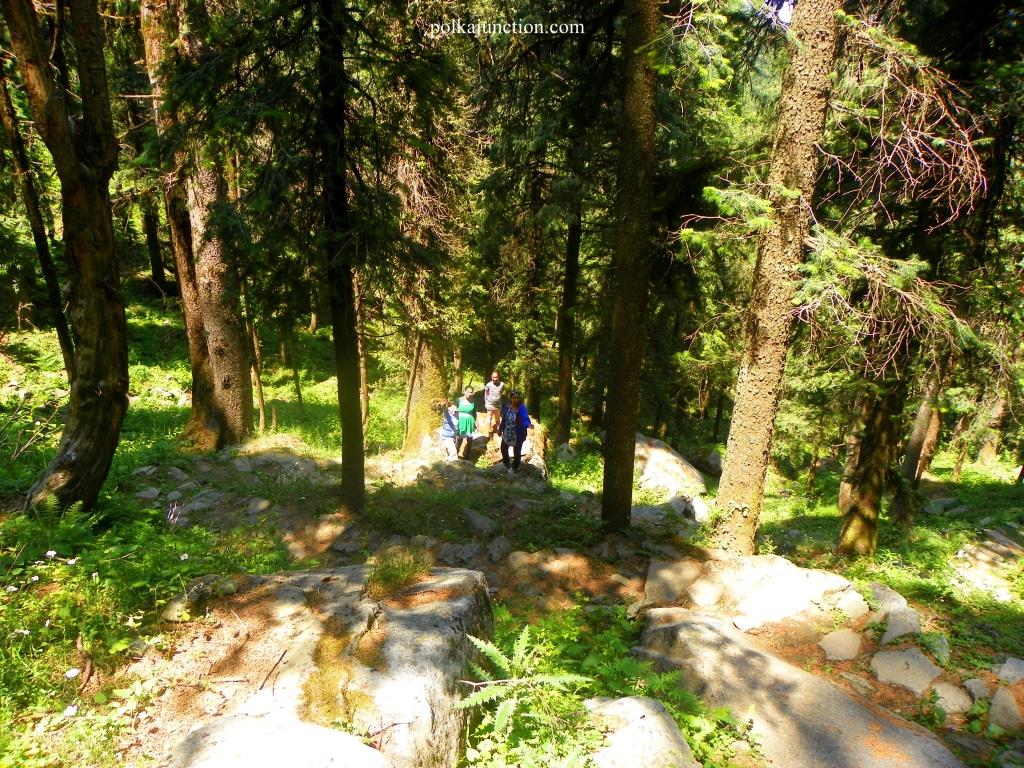 Thoughts on the Dainkund trek –

If you are in the Singing Hills of Himachal Pradesh- ask for the route to this trek, that starts nearby to Aala, en route Dalhousie to Dainkund. This is

You may want to read about Dalhousie on my blog here : Dalhousie: A Colonial Experience In The Primeval Grandeur Of Himachal Pradesh! 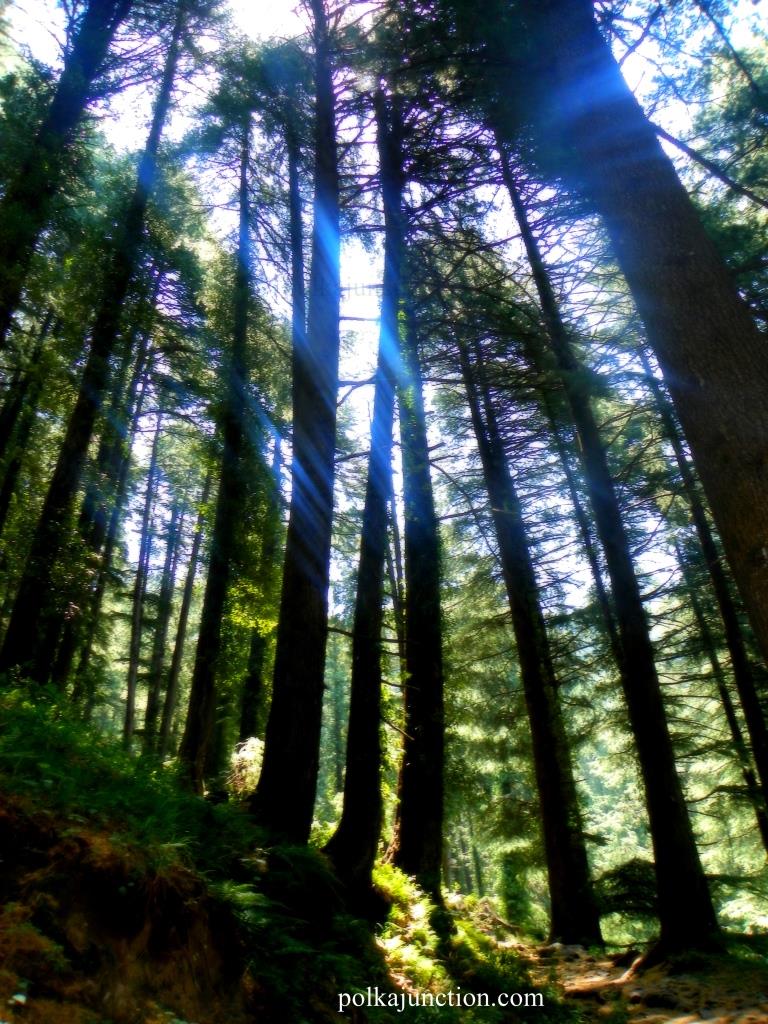 Hope you enjoyed the musical notes of the Singing Hills from Dalhousie to Dainkund as much as I did!

Till I take you to a new destination again, please enjoy reading the blogged destinations on Polkajunction. Ciao…….