The aftermath of the recent ‘Uri attack’ has shifted the focus on the- military power and strategic capability of India. Such attacks have compelled India to give a befitting reply to countries serving as breeding grounds for the terrorists. And the hub of all this planning and future action hovers around the ‘Raisina Hill’ in Delhi, India.

So let me take you through the historical roads of ‘Vijay Chowk’ and ‘Rajpath’ in Delhi, that stretches from the Rashtrapati Bhavan situated on Raisina Hill to the historical ‘India Gate’- as this is where all the action takes place and important decisions are made.

As we walk through the pages of history, let us look back at the road we have trudged and the sight that beholds us is of the India Gate -standing majestically faraway across the road! On either side , we see the extensions of the North and the South Blocks or the Secretariat of the Indian government built by Herbert Baker.This road can indeed be termed the Power Plexus of India. 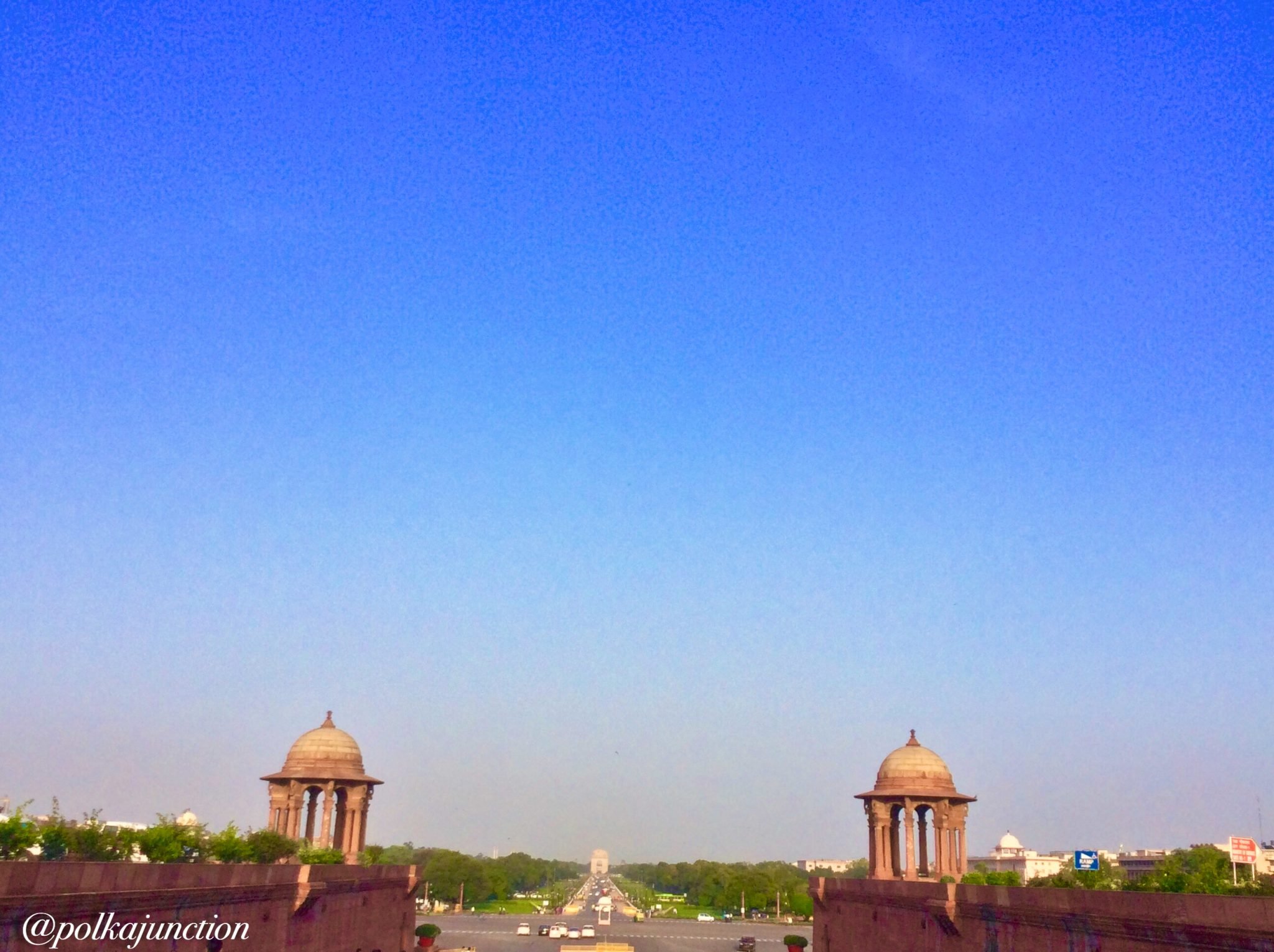 Take a look below and you will see the North Block that houses the Indian bureaucracy. It houses the offices of  ‘The Ministry of Finance’ and ‘Ministry of Home Affairs’.This structure chiselled out of Red-Sandstone is a perfect fusion of Indo-Western architecture. 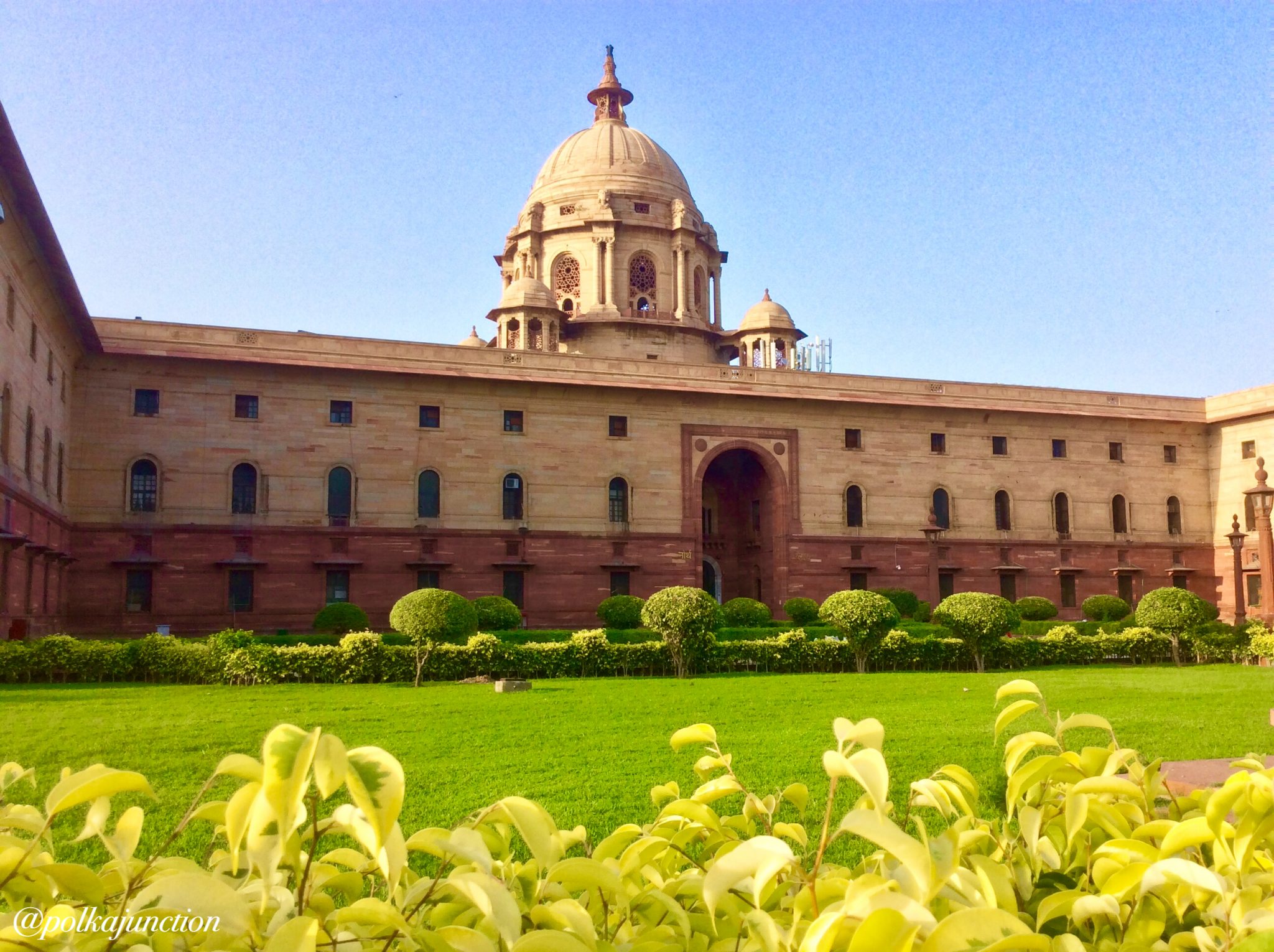 The pillared corridors of the Secretariat look similar to the many monuments across Europe, but on a closer view, one can discover intricate carvings of elephant heads and Jaali which are so synonymous with Rajasthani architecture. 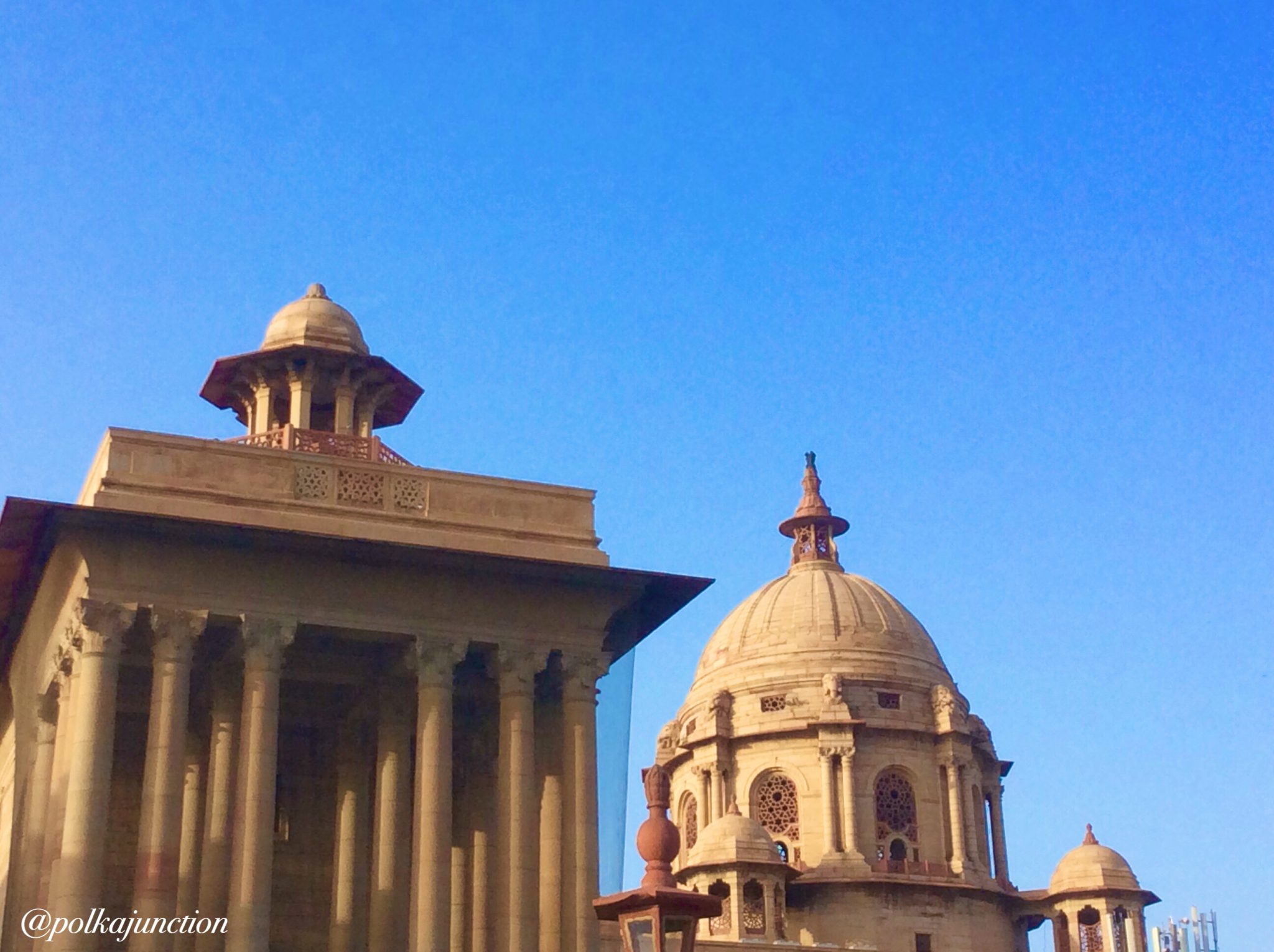 The North and The South Block buildings are flanked by the ‘Dominion Pillar/column’ presented by Canada, Australia, New Zealand and South Africa to the British rulers in India before India’s Independence.Take a closer look at the Column below here and you can see the words ‘Australia to India’ inscribed on it. 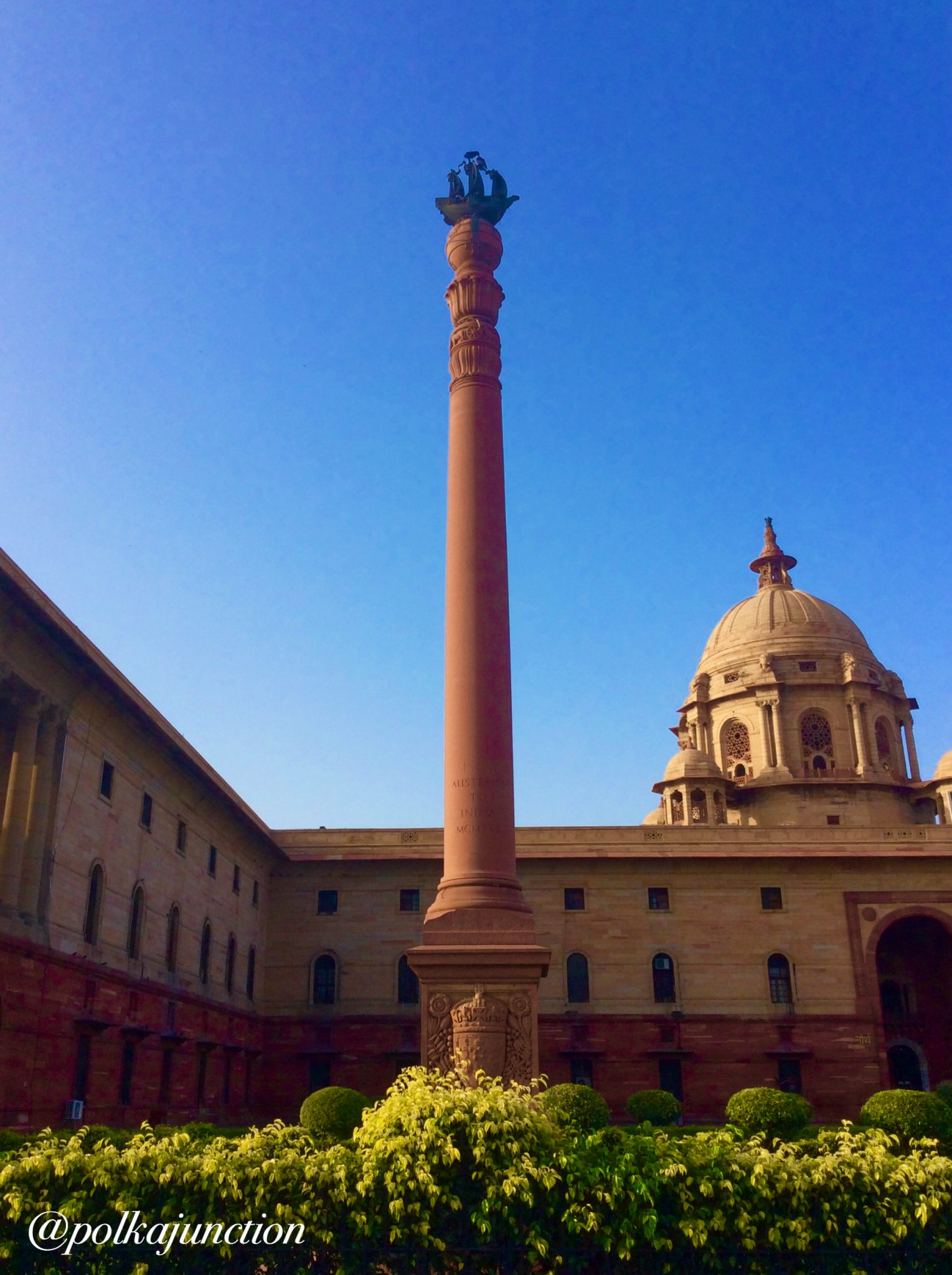 On the other side of the road is the South Block adjacent to which is the Indian Prime Minister’s Office.This wing of the Secretariat houses the PMO, MEA , MoD and other Ministries. 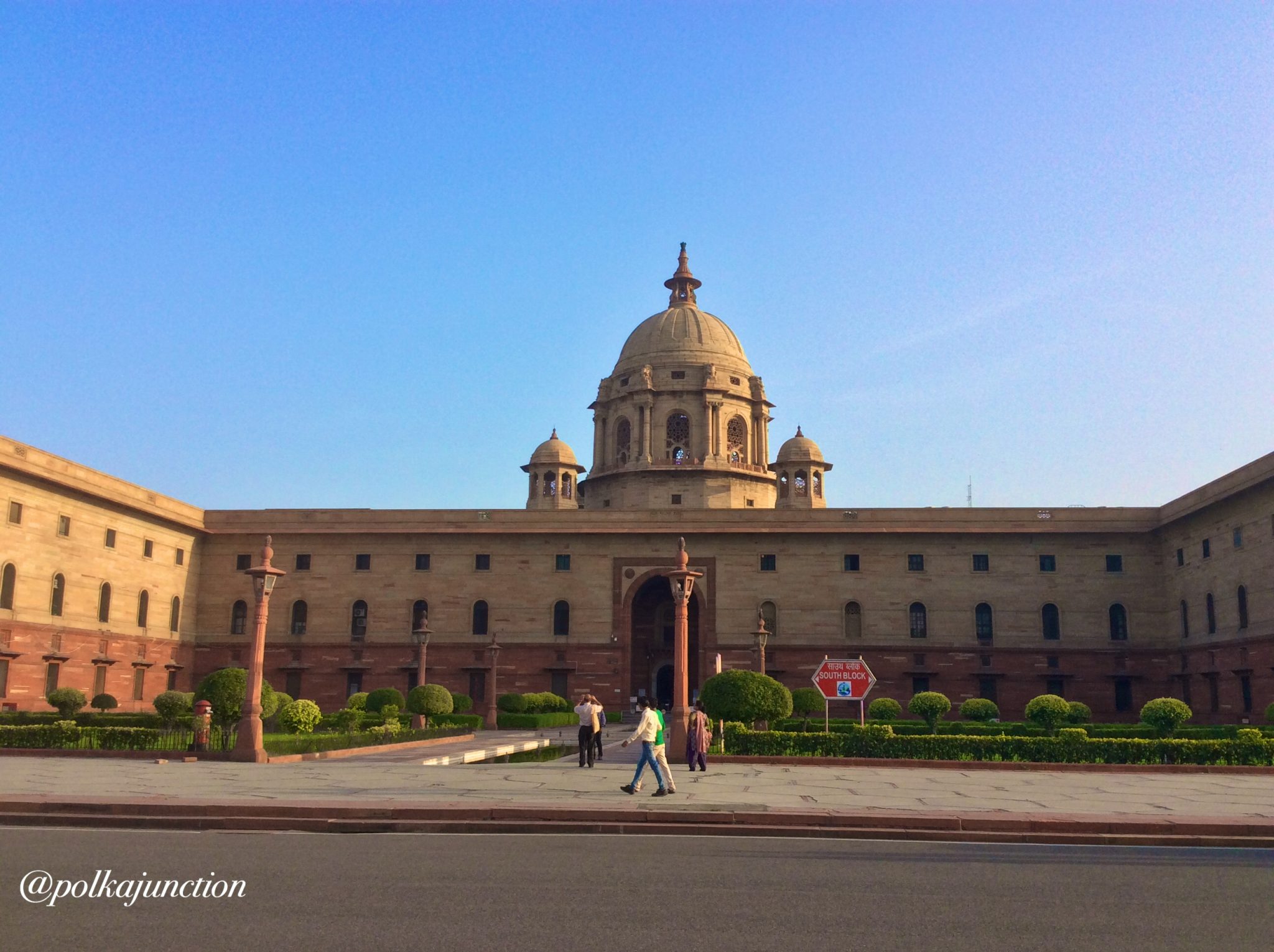 Let us walk a little more on this path leading to the Grandeur called the ‘Rashtrapati Bhavan’ which houses the Indian President.I am going to reveal the interiors of the President House in my future posts as I go visiting it very soon.Till then, I would like to keep this architectural marvel in darkness on this blog and just share some silhouettes of it against the setting sun. 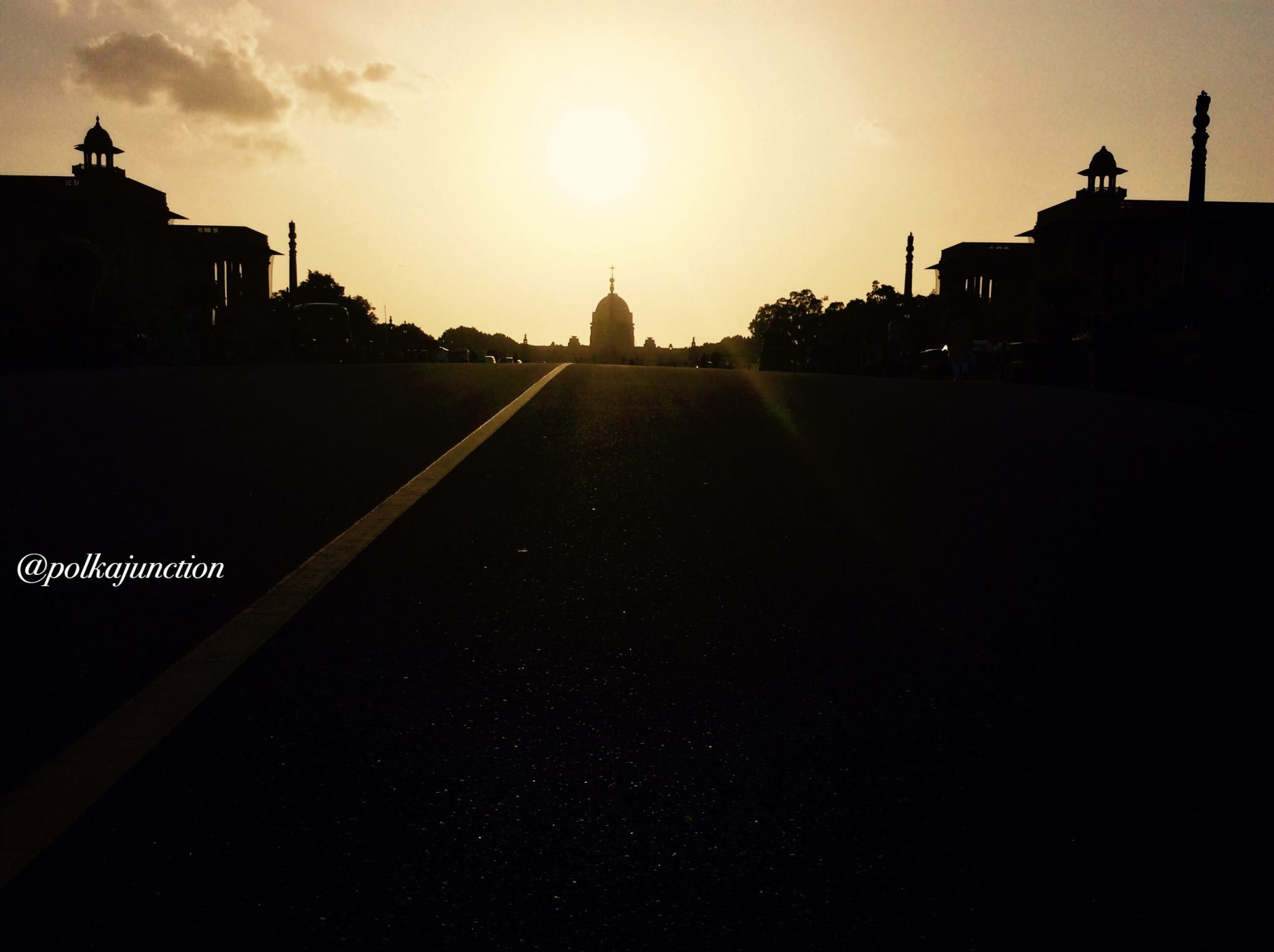 Quickly turning back, we head to the Rajpath for a short boating trip to keep the kids engaged! Rajpath is where all the action takes place on January 26th every year as India celebrates its Republic Day. And, the Independence day is celebrated at the Red Fort

The boat ride costs Rs.120 for a time period of 30mins and is a good pass-time for kids who might get bored while the grown ups are exploring the Architectural marvels. 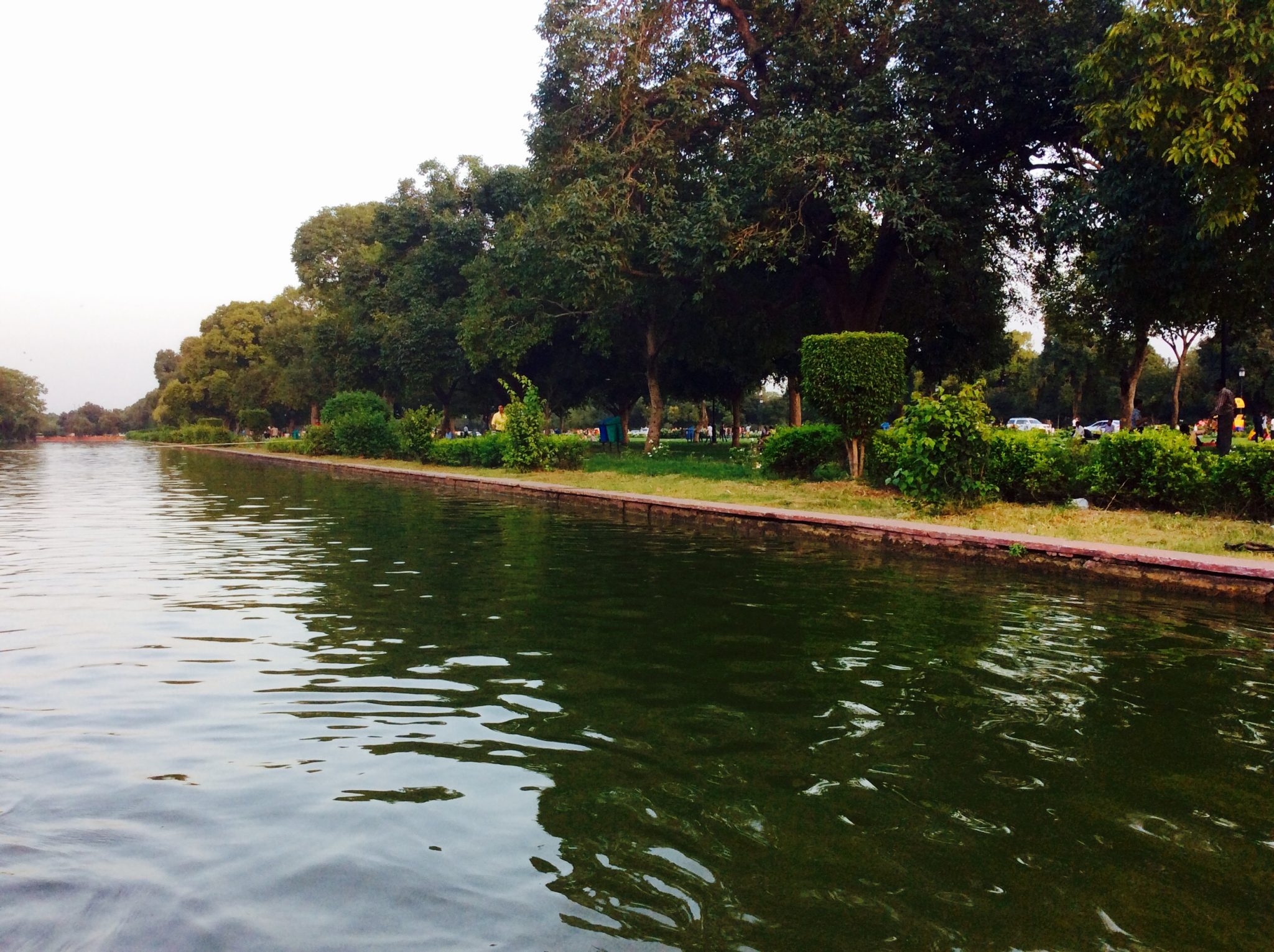 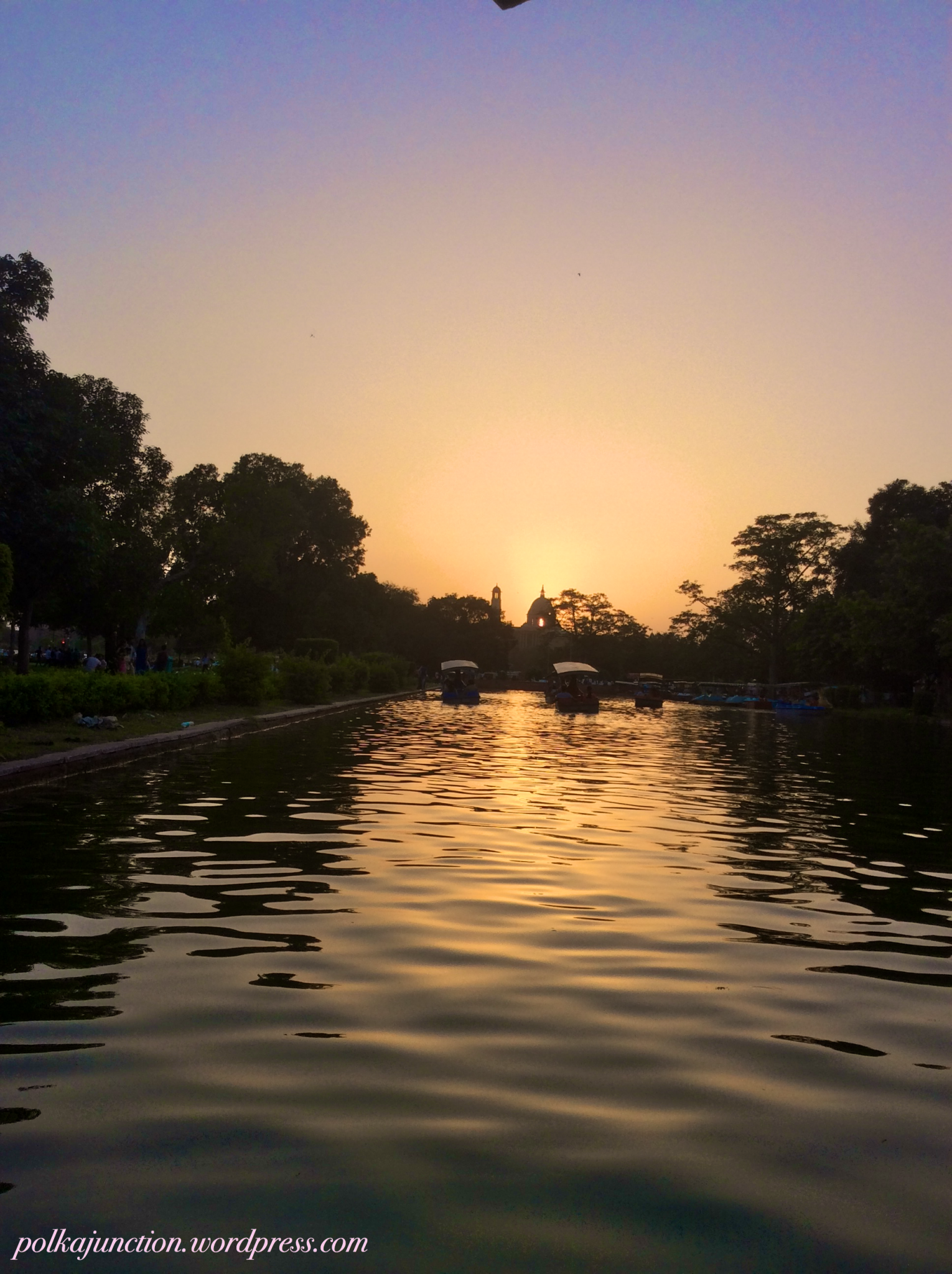 As we enjoy this sunset sitting in the boat for sometime, why don’t you get a sketch made of yourself by a person called ‘Shiv Hari’! This guy does a Live-On-the-Spot sketch of people for a mere amount of ₹ 70 in the lawn adjoining the boat club. Speaking to this blessed soul on my previous visit, I got to know that he is from Bengal ! (But somehow I feel he is a refugee who is in India, trying to make a living by working hard )

Now, let us take a ride in an auto to reach our last destination for the day – India Gate. A first glimpse of this War Memorial enamors a tourist with its enormity and the humongous crowd of visitors. India Gate is a First World War memorial dedicated to the soldiers of Undivided India who sacrificed their lives during WWI. 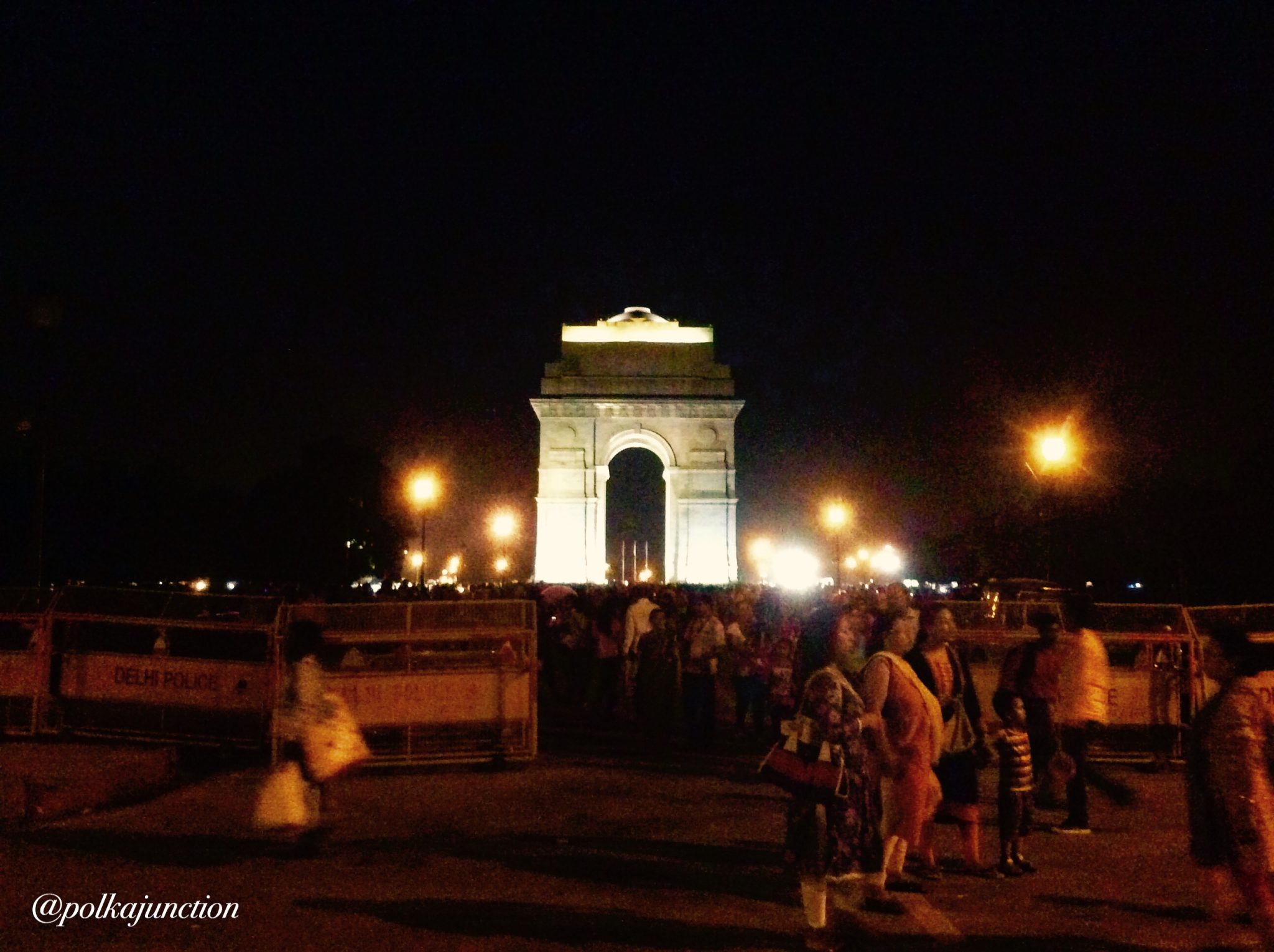 In 1971, following the War of Bangladesh Liberation, a small platform consisting of a black marble plinth, with a  reversed rifle, capped by a war helmet was constructed.This is bound by four eternal flames and  was built beneath the archway.This structure, called the Amar Jawan Jyoti, or the Flame of the Immortal Soldier has served as India’s Tomb of her unknown Sons who have sacrificed their lives for their Motherland. 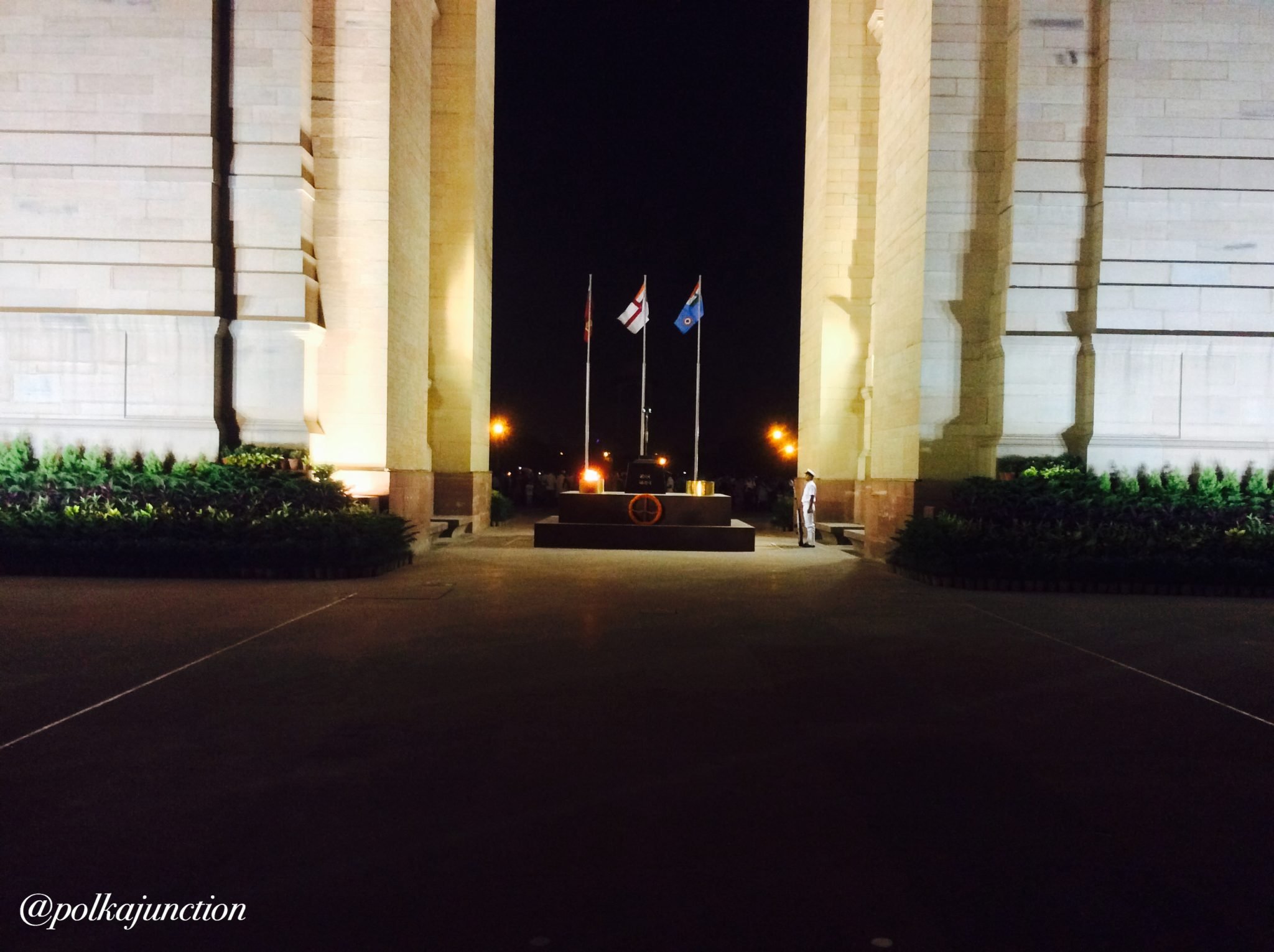 Amar Jawan Jyoti is manned round the clock by soldiers drawn from the three services of the Indian armed forces, on rotation. 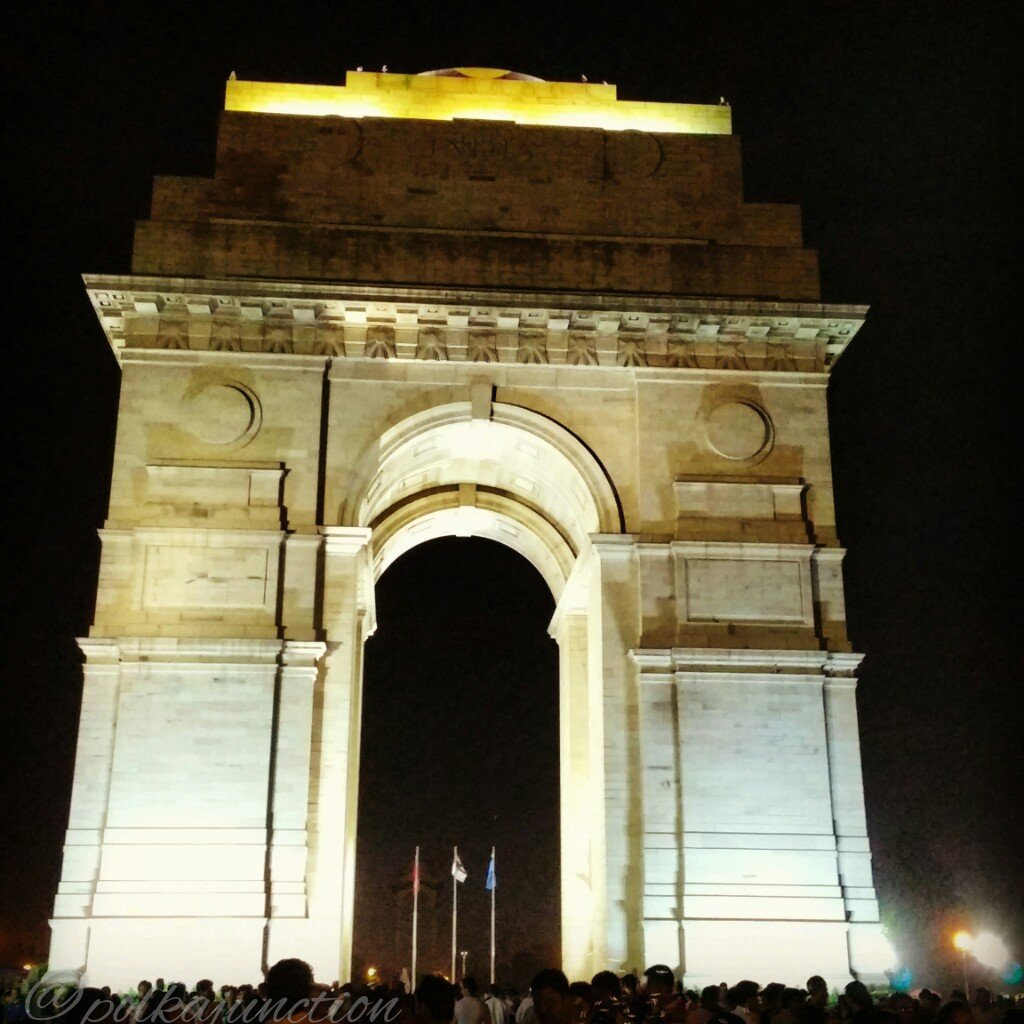 If Indian Armed Forces can safeguard the dead so diligently, just imagine to what extent the soldiers can go to protect their citizens and their motherland! So, before we bid good-bye, let us salute the soldiers who protect us day and night. Jai Hind!

9 thoughts on “Colonial Heritage across the Road!”