City Palace Jaipur or the Jaipur Palace, as it is commonly known, is one of the most popular royal palaces in and around the city of Jaipur – the capital of India’s majestic Rajasthan state.

Nicknamed the Pink City, Jaipur was designated as a UNESCO World Heritage Site in the year 2019. A tag that it so richly deserves. And, everything is painted in a beautiful shade of pink inside the walled city of Jaipur, that is home to more than 10 palaces and 3 forts.

No wonder then, that Jaipur city is dubbed as ” the city of palaces in India”. It’s been a frequented place on my travel list, after Agra and Hyderabad.

Yet, I could never before spend ample time exploring the famed Pink city or its Jaipur Palace – a destination termed the ” tourism place of Jaipur ” and ” best place to visit in Jaipur ” by local tour promoters.

On a recent visit to the Jaipur Palace, I made up for lost time by delving in the essence of City Palace in all its glory- architecture, arcades, doorways, windows, and vibrancy.

So, come with me as I take you on a guided tour of the Jaipur City Palace, where the royal family still lives in one section of the palace premises!

On this virtual tour, apart from emphasising on the Pink Palace’s architecture, doorways and history, we shall also cover practical information like the entry fee, timings, et al.,

A guide to exploring the City Palace Jaipur

Palaces, and structures with traditional architecture give a peek into the thought process, design, craftsmanship, and nuances of a bygone era. Today, those very qualities cannot be replicated without adulteration.

On my recent trip to the Jaipur City Palace, I observed the apathy of tourists towards upkeep of traditional architectural structures and a lack of reverence to our past glory. This indeed was quite appalling as well as disheartening.

Let’s remember that we no longer have craftsmen and architects in large numbers who can build architectural wonders like the Temples of South India or the Taj Mahal or the City Palaces of yesteryears.

The world is tilting largely towards structures based on so-called ‘modern architecture’ that lacks finesse (according to me) in relation to the intricate, elaborate, vibrant yet sustainable, eco-friendly structures of our glorious past. Hence, it is every individual’s duty to protect and preserve these structures of the bygone era and practice responsible tourism. Protect – Preserve – Practice should be our mantra!

Nevertheless, this photo tour of the City Palace Jaipur is my humble attempt to re-emphasise the beauty of Indian architectural wonders, by providing a complete travel guide to the Pink Palace, and a plea to travel responsibly and sensibly.

Coming to this virtual tour of the Jaipur Palace, let us know its history before focussing on architectural aspects.

The City Palace was built between 1729 and 1732 CE, initially by Sawai Jai Singh II, the ruler of Amber. He planned and built the outer walls and subsequently the premises was expanded by rulers who succeeded him.

Vidyadhar Bhattacharya – chief architect of the royal court, Sir Samuel Swinton Jacob, and Sawai himself ought to be given credits for conceiving an architectural marvel and executing it with finesse.

Did you know that Jaipur Palace is also often known as the Pink Palace? Well, there’s an interesting legend around this too.

The architecture of the Pink Palace, which I consider is one of the most elegant and well-preserved of palaces in Jaipur, has always fascinated me.

The City Palace Jaipur Architecture has been based on Shilpa Shastra of Indian architecture, as well as Vaasthu Shastra. Apart from this, the structures inside the City Palace reflect a fusion of Rajput, European and Mughal architectural styles.

The Pink palace complex is tucked away at the northeast side of the centrally located walled city of Jaipur. The royals, still, live on the premises inside the Chandra Mahal complex.

A virtual guided tour of the Pink Palace in Jaipur

Now that we know the Jaipur Palace’s history, and its location inside the walled city of Jaipur, let us continue our virtual tour of the Pink Palace aka City Palace Jaipur with a focus on its splendid architecture.

You may also want to read about the Thirumalai Nayakar Palace of Madurai, which again has a unique architecture like that of the City Palace Jaipur.

Mubarak Mahal, meaning the ‘welcome palace’, served as a reception centre and was built in the late 19th century. The ground floor of it has now been converted into a textile museum.

The Mubarak Mahal is a perfect confluence of Rajput, Islamic, and European architectures, and is the hallmark to showcase the City Palace Jaipur Architecture, which is definitely one-of-its-kind. This aspect makes the Pink Palace quite different from the other prominent forts and palaces, like those in Jodhpur.

Just to the right of the Mubarak Mahal, is the beautifully ornate marble gateway- Rajendra Pol, that leads to the hall of public audience and inner sections of the palace complex.

The Rajendra Pol gateway is flanked on either side by huge white elephants that have been sculptured out of single marble stone.

Do not miss the intricately chiselled Mahout sitting in front of the wonderfully sculpted howdah, and the natural-looking flairs and folds of the Caparison. These works of art are indeed commendable and bring into limelight the experience and quality of the artisans involved.

Sarvotra Bhadra or Diwan-i-Khas (Hall of the Commons/Public audience) is an open pink-pavilion with stout columns surrounded by wide pathways. One enters this courtyard through the Rajendra Pol.

You can catch a glimpse of the two massive-silver urns here, that have their names etched in the Guinness Book of world records.

The pavilion is flanked on four sides by beautiful lamp-posts chiselled out of red-sandstone.

At the fag-end of the Diwan-i-Aam courtyard is a gate that leads to the seven-storeyed Chandra Mahal, the primary residence of the Maharajas of Jaipur within the City Palace.

Pritam Chowk – The most visited place in Jaipur City Palace

The Riddhi-Siddhi pol marks the gateway and passage to the inner courtyards of Pritam Chowk which indeed is the cherry on the cake of the City Palace Jaipur Architecture.

The gateway is flanked by beautifully carved doors on either side. The mirror near the entrance interestingly depicts Buddha figurines. This is the only Buddhist influence that I could observe inside the City Palace. Maybe, this was gifted to the Maharaja!

Significance of the Insta-worthy doors of the City Palace Jaipur

The colourful and intriguing aspect of the Pritam Chowk is the four differently themed and well-designed gates/doors and doorways through which the Maharaja of Jaipur used to enter Chandra Mahal.

Each door is dedicated to a particular Hindu God. A guide informed us that the Maharaja used to enter ChandraMahal through each of these doors as per the prevailing season at that time!

I’ve tried to explain the significance of each of these gates and the explanation behind the motifs and designs that ornate them.

The northeastern peacock doorway in the Pritam chowk represents autumn. It is decorated elaborately with colourful and intricate frescoes with peacock images and has a small marble idol of Lord Vishnu on its lintel. 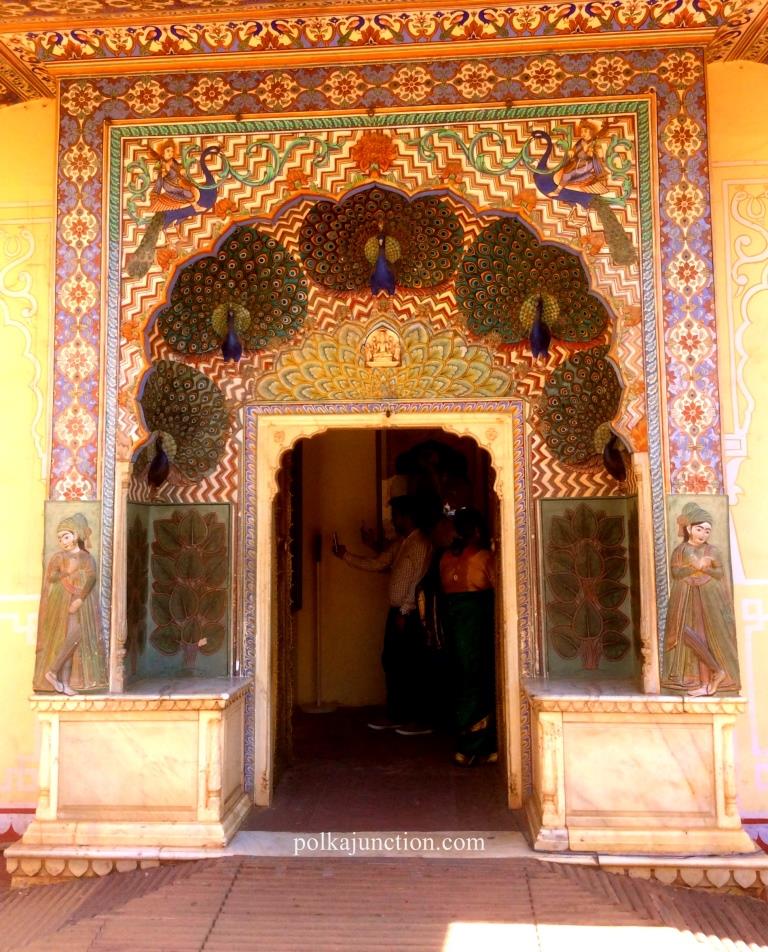 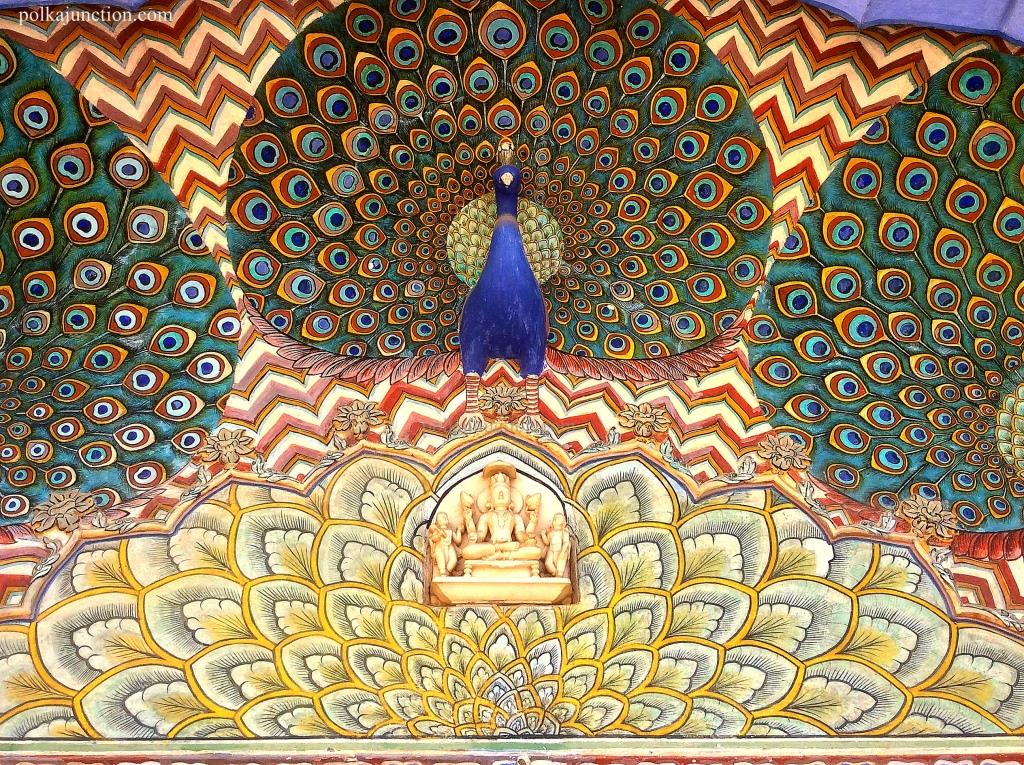 The Lotus doorway in the southwest is adorned with colourful lotus petals and flower patterns. It represents the summer and has a marble idol of Goddess Devi on its lintel.

The third doorway is on the northwest side of the courtyard. It is also called the Lehariya (waves) gate/ door as it has waves patterned around it. It’s green in colour indicating spring and is dedicated to Lord Ganesha who sits as a marble idol on the lintel. 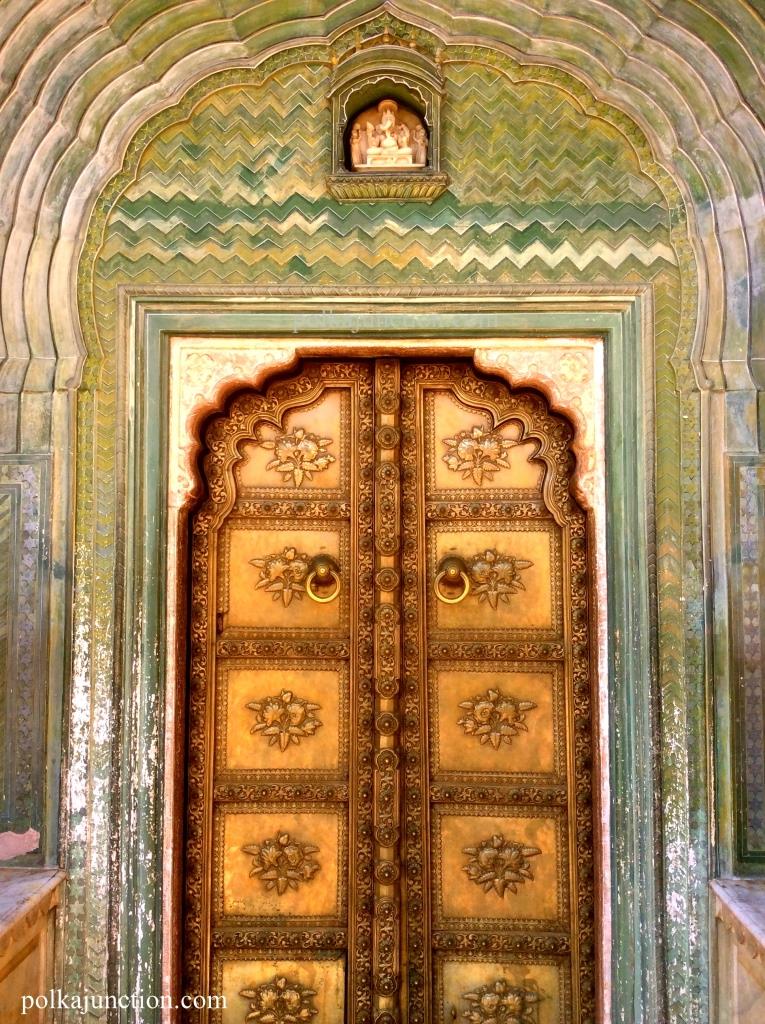 The fourth door is dedicated to Lord Shiva and represents the Winter Season. It has dramatic roses painted on the frescoes.

I could not capture the beautiful door as it was too crowded with visitors trying to snap selfies beside it. There were also many tourists who were trying to touch the frescoes not realizing that constant touch can actually chip-away the paints! Please, be a responsible tourist…

Here are glimpses of the inner courtyard and the view from there of the seven-storeyed Chandra Mahal- the floors of which are accessible through the Royal Grandeur Tour ticket that costs Rs2,500/- per ticket.

This hall is also known as Diwan-i-Aam. It has witnessed the welcoming of Viceroy Mountbatten and the likes. The period room encompassing the Art-Gallery- showcases original furniture, artworks, lights, and a special display of ceremonial garments and medals. Photography is not allowed inside the hall. I was able to capture the two different beautiful golden doors that lead to the hall, though, from outside.

The Sabha Niwas opens to the Baggi Khana just outside- housing the handicraft shops and the transport gallery that showcases some of the transport collections of the bygone era. It has been built in the true Mughlai style.

Looking for a stay option? Then do read this wonderful review of a Pearl Palace Heritage Hotel in Jaipur

A collection of Jaipur Palace Photos

An intricately carved wooden cabinet in one of the corridors

Do look up towards the ceiling of the Maharani Palace that houses the museum with collections of weapons, guns, gunpowder, etc., The ceiling of this chamber has unique frescoes, which are said to be preserved using jewel dust of semiprecious stones. Photography is not allowed inside this museum and the below snap was taken by my husband many years back when it was allowed.

Hope you enjoyed this virtual tour of the City Palace Jaipur Architecture in the series on Royal Rajasthan. Do let me know your thoughts on this post in the comments section!

Remember the 3 Ps of  Responsible Tourism

The 3 Ps of  Responsible Tourism Protect-Preserve-Practice has been conceived by me. Please refrain from copying or reproducing it.

Image Source: All the photographs in this blog-post has been clicked by me on my iPad Mini 2

29 thoughts on “City Palace Jaipur Architecture : 30 Photos to get you started on Responsible Tourism”