Of course, not snake wine, but snakes have definitely been an integral part of our dwellings amidst thick vegetation, inside military campuses. There has never been a posting of ours in which the snakes have not glided their way into my home – uninvited. So much so, that I consider their visit very auspicious of late.

Coincidentally, the snake is also our family deity and like millions of Indians, we too worship them. Thus, I can say that – Snakes and I, go a long way.

My recent trip to Thailand and subsequently to Laos was indeed a great erudition. Thailand is like India in many ways, yet,  very different. I shall elaborate on the ‘erudition’ part some other time, but for now, let us quickly move on to the curious case of bottled critters aka snake wine.

Note
I am not promoting the usage of alcohol/snake wine or its consumption in any form through this post. This write-up is just an account of my off-beat experience of varied cultures. Although we may find it unethical it’s part of their culture, and we as responsible travellers need to respect that.

No, I didn’t go on a quest for snake wine…

Travelling and exploring new places is a way of life for our family and I enjoy it immensely. It has helped us break barriers of prejudice, embrace varied cultures, learn local recipes, make new friends and above all – personally, made me realize that change and new learnings are the only constants in life.

On one such travel exploration from Chiang Mai, Thailand, got to visit the Golden Triangle located nearby to Chiang Saen city in the Chiang Rai province. Of course, not in such of snake wine for sure.

What is the Golden Triangle?

Golden triangle is a piece of land lying along the banks of the Mekong River and located at the intersection point of three countries- Thailand, Laos, and Myanmar.

The Golden Triangle of south-east Asia is infamous for its illegal opium trade(unfortunately). However, this is no deterrence to not opt for a day tour of this place.

In fact,  it is a beautiful destination to take a boat ride across the river. The majestic golden statue of  Buddha welcomes visitors to this area on the Thailand side, while verdant mountains, bountiful farmlands, and a wide-stretched River Mekong look picturesque.

The landscape looks postcard-perfect on a clear, sunny day!

With the advent of monsoons, the river was gushing and gurgling due to high undercurrents on the day of our visit to Chiang Rai.

Did I tell you, that one has to deposit their passport to the authorities in Thailand before embarking on this boat ride? Well, yes, and I was damn tensed doing it. But do not fret. They do keep the passports safe. 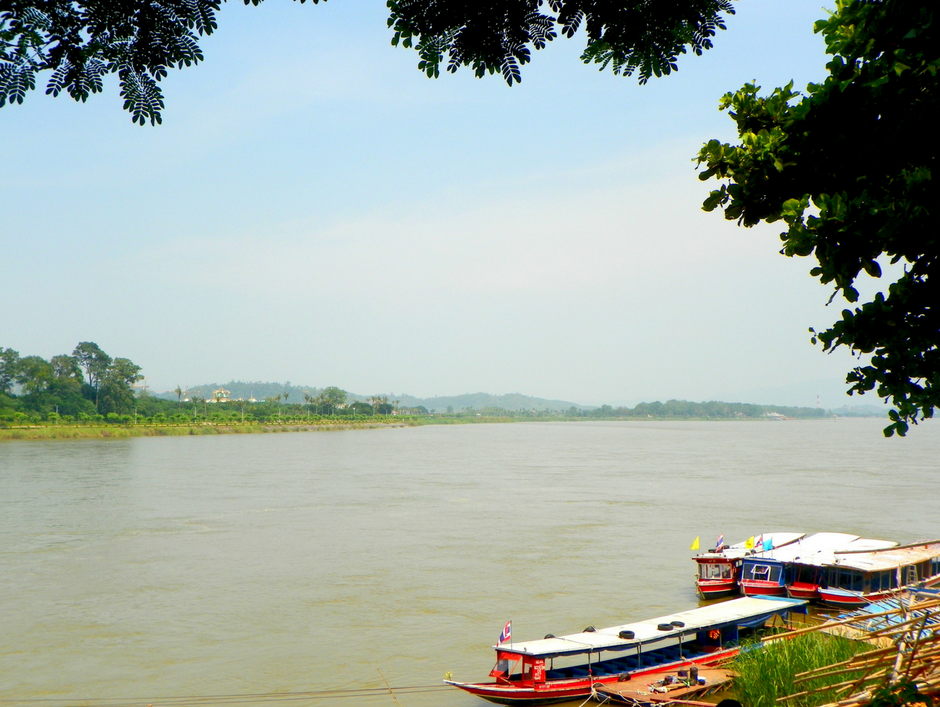 On a boat ride to Laos

I enquired one of the locals as to why Thailand did not have a casino on its banks and was told that the villagers of this area resisted and did not approve the presence of one as they strictly followed Buddhism. Impressive!

In Laos without a visa

The only sights that welcomed us as we had set foot on Laos soil were that of the village kids forcing visitors to part with some eatables.

Not an unfamiliar scene in many parts of Asia, still, heart-wrenching!

It was almost noon when we reached Laos and it was sweltering hot. Maybe a reason for the very sparse crowd, in spite of it being a tourist place.

The Laos market on the banks of the River Mekong was a small-one selling bags, wooden toys and décor, trinkets, and other usual stuff. Nothing that was being sold in Laos seemed unique after having been to the Night Bazar of Chiang Mai until I went nearer to a shop selling bottles of something.

However, my eyes popped out upon seeing rows and rows of snakes, scorpions and other creatures bottled up. The shopkeeper informed us that they were rice wine and alcohol with the snake in bottles. However, the labels read that these were snake whiskey and snake wine! eeks…

What is the snake wine all about?

In simple terms, the snake wine has snakes seeped in alcohol or wine bottles. However, when we deliberate a little on the process of making snake rice wine, it ain’t so simple.

The process of making snake wine involves infusing fermented rice wine or alcohol with dead critters, like snakes and scorpions, along with some herbs and then allowing it to ferment further.

After undergoing many months of this fermentation procedure, the venom of these snakes and scorpions being protein-based gets inactivated by the ethanol in rice wine, thus rendering these creatures safe for consumption. This is now termed a steeped variety of Snake wine.

We were also briefed at the market about a variety of rice wine in which the snake blood is consumed!

Of course, I knew that rice wine is a speciality of south-east Asian countries and is made by fermenting sticky rice. Also, states of North-east India and a couple of other Indians states do have their own varieties of rice wine, but I had never seen anything like the snake wine before.

Because snakes are sacred for us Indians!

Snake whiskey as labelled on these alcohol bottles with snakes in them is indeed considered exotic. The snake and scorpion wine is supposedly a medicine to treat ailments like lumbago.

But then, I heard varied versions of its usage— ranging from being used for boosting male virility to treating rheumatism. I could sense a lot of Chinese influence in these regions of Laos as traditional Chinese medicine also advocates the usage of Snake wine.

So snake wine definitely isn’t feeding wine to the snakes, but seeping them in wine rather.

If interested, the shopkeepers were willing to offer a small quantity of snake whiskey for tourists to taste.

But, the villagers had cleverly draped the display benches with red cloth pieces, thus making the creepy bottles of snake wine look colourful.

The end to our quest for snake wine

After this off-beat experience of getting to know about snake wine and learning the process of making it, I wanted to venture further into the village on the Laos side.

But then the group with which we were travelling along, were more interested in shopping, and then, it was time to hop on the boat and sail across the Mekong River to Thailand.

Upon deboarding on the Thailand side, our next move was to the ‘7 eleven’ store to buy something to munch, as it was going to be a long drive back to our hotel room in Chiang Mai. But, not before taking back our passports.

After all, I had to get back to India and then globetrot some more.  Are you wondering what the group had bought after all that shopping? Well, by default, nothing!

So, have you tasted the alcohol with snakes or scorpions in it or have you had such an off-beat experience? Do share it with me here in the comments section.

And if ever, you taste the Snake wine, demand a bravery badge from me…..till then keep travelling 🙂

24 thoughts on “Snake Wine of Laos : Up close with bottled critters in alcohol”