I have been fascinated by the ‘Mahabharata’ since childhood. And, when I got an option to choose a book for review by the publishers, I opted for the book ‘Tunnel of Varanavat: Mahabharata Reimagined’ by Gautam Chikermane. Here is an honest review and thoughts on this book.

Book Review of Tunnel of Varanavat 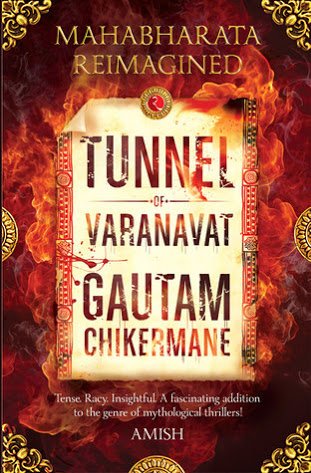 Light at the end of the Tunnel

The book cover has been designed cleverly. With impressions of flames and a scroll on which the title is printed with blood splattered on it, the cover reaffirms that the story in the book is one of the many stories of the epic. It is captivating and gives an ethnic feel to the book as well. Also, the blurb gives an interesting and inquisitive glimpse into what the book is all about.

The story starts with a glimpse into the world of darkness-the the underground, the tunnels, and the science surrounding it.‘ Badri‘ an ex-soldier who becomes a miner subsequently, is the protagonist and is also the narrator of this story. The first few chapters are like a ‘Travelogue of the underworld’, experiencing which, a reader is bound to appreciate and marvel at the knowledge a miner needs to possess in order to rule this world of darkness. In this story, Badri can very well be termed the ‘Don’ of the Underworld (if I may call so!) I could not but appreciate the hardships and endurance which the miners and the tunnel workers are going through every day around the world. The following lines from the book more or less sum up the condition of the soldiers and the miners and how tunnels represent the darker side of a person.

‘Tunnels are a world painted with different colours of shadows-purples, greens and blues. And then, there was black.You’ll be surprised at how many kinds of black co-exist.No different from men. Or the innumerable shades of personality parasites that resided in every man, some known. Most Unknown.’

The language used is very poetic and eloquent, yet simple and not so complex. I felt as if I was reading the shlokas from Puranik scripture – such is the flow of words in the book. On the whole, the language used imparts an ethereal feel to the book.

Badri’s characterisation in the story is of great significance wherein his loyalty, expertise, his warriors, and his personal life is tested time and again throughout the story. I particularly enjoyed reading his monologues, the voice of his consciousness, and his sublime conversations with Urvashi and Veer. These conversations show the mutual respect, trust, understanding, and affection each one had on the other, wherein one is able to communicate without spilling words! Also, every one of us does often engage in monologues when in doubt -to know ourselves, realise our potential and conquer our fears which shows that we are mortals susceptible to feelings. Badri too goes through the same which helps in not assigning a ‘larger than life’ character to him. More or less, I find the characterisation of Badri and Veer the same- both loyal, duty-bound and ever alert and they almost go about their duties as parallels but in sync.

The assessment of each of the Pandavas, Kunti, Kedar, Purochan, and others through the eyes of Badri is captivating and interesting. Purochan is like Raavan – versatile, kindhearted, and generous yet destructive. Like a tunnel which is filled with darkness yet holds hope and light at the end of it, the character of Purochan in spite of being consumed by darkness emits shades of goodness at various stages of the story. A reader is bound to sympathise with this character at some point of the book and question the relevance of ‘the double-edged sword called Dharm’.

My Take on the Book

Some readers may find the pace, dragging and the initial chapters confusing. However, I suggest they read through it, to get a deeper understanding of the ‘underworld’ as well as the backdrop to the story. Also, some of the printing errors like ‘Cedi dynasty’ for the ‘Chedi dynasty’ need to be overlooked. I so wished that these errors did not exist!

There is no significant mention of the miner who built the tunnel for the Pandavas’ escape in the ‘Adi Parva’ of the various versions of ‘Mahabharata’ I have read till now, except for a mere mention of a miner being ordered by Vidur to dig out a tunnel and eventually return to Hastinapur (Do let me know if I am wrong). Also, any reader of Mahabharata will know that the Pandavas did escape from the palace built to kill them. Yet, writing a story by reimagining the epic without tampering its greatness, giving the deserved honour to the various so-called ‘insignificant’ characters, keeping the reader engaged though we know the fate of the ‘Pandavas’ is no mere task. For this, the writer rightly deserves applause and due appreciation is given for making this story very much plausible.

Be it the fight of Janaki and her tribe for a ‘voice’, the apprehensions of ‘Rishabh’ on the fate of spies, the conditions of the mines and plight of miners, the greed for power and fame, the treatment of common people to upkeep the ‘Dharm’ towards the rulers or the segregation of the dwellings at Varanavat based on caste- every character, statement, description of nature and event in the book can be associated with the people and happenings in today’s world.

Read my review of the book Corpokshetra that’s a modern-day take on the Mahabharata.

Some of the lines from the book are being quoted here that convey social messages and support my observations.

‘Ever since civilisations began to mushroom, inequality had been a handmaiden of money and power the mistress of control’ ‘I realised how over generations we citizens have been systematically brainwashed into believing that we need to protect the King at any cost, even with our own lives’.

Reading this story I was reminded of the lines from ‘Mahabharata’- Dharmecha arthecha kaamecha mokshecha bharatarshaba Yadhihasthi tadanyatra yannehasti na tadkvachit : Meaning, “What is found here may be found elsewhere. What is not found here will not be found elsewhere.” And this is exactly what this story from the Mahabharata too does – conveys about everything that is happening around us!

In conclusion, let me say that this exciting book is a voyage through the conscious and subconscious minds of lesser-known souls like soldiers who work behind the scenes tirelessly without any recognition and importance, in the name of loyalty and dharma!

Do grab a copy and switch on some soothing music to experience and enhance the poetic words of the book!

The above review has been much appreciated by the author.He has written about the same on his FB page.A snapshot of it is being attached below. 🙂 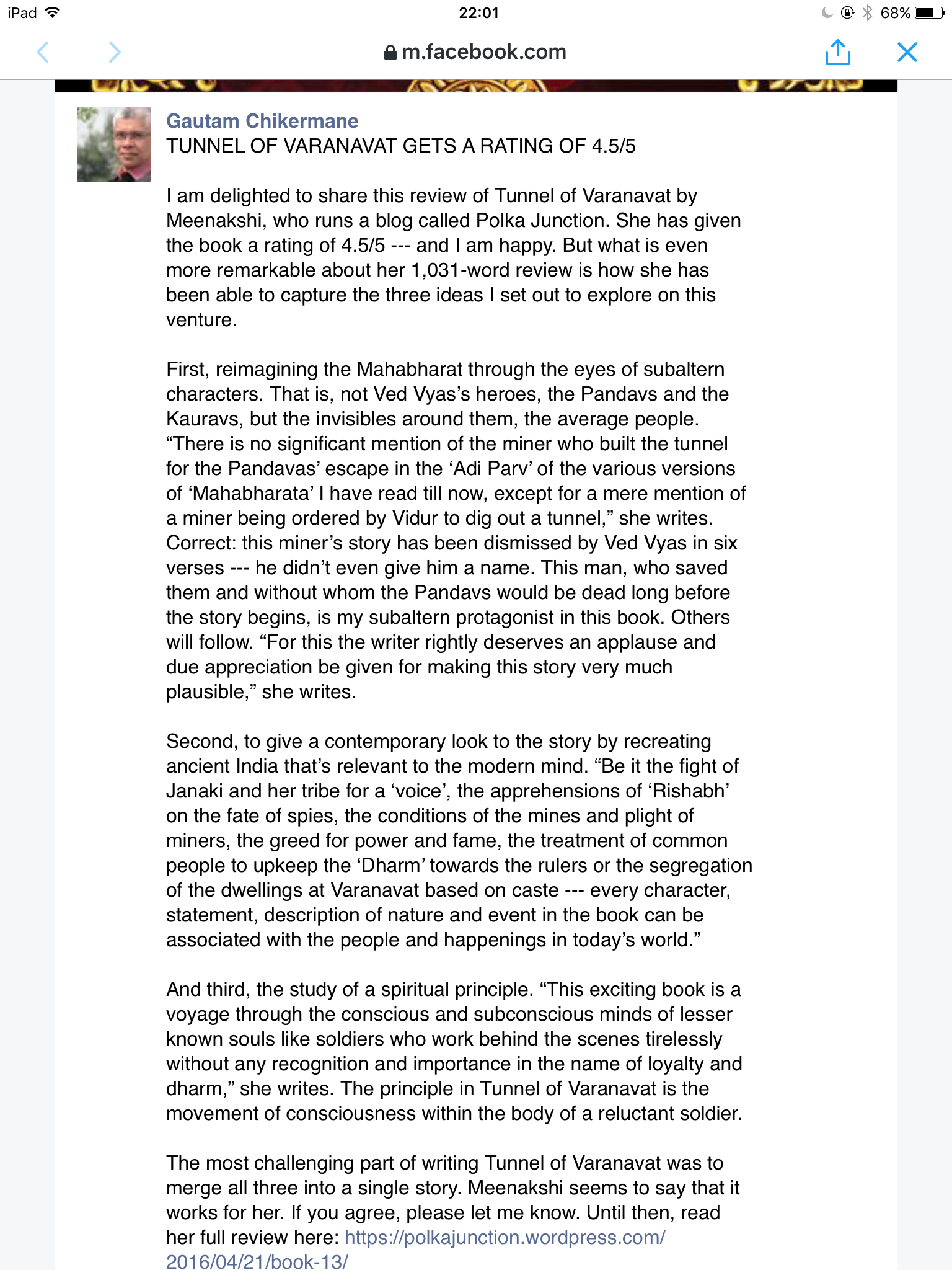