Set among the power corridors of India’s capital is the book ‘The Honest Season‘, a political thriller by Kota Neelima for which this review is being written. 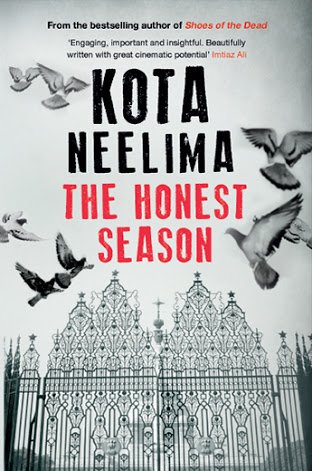 A Story Of Conscience, Truth and Consciousness

The book title ‘The Honest Season’ becomes quite compelling as ‘Honesty and Politics‘ do not gel together in today’s scenario.

The  book is a political thriller, as suggested by the blurb below:

1 journalist caught in the battle

1 government with a lot to hide

Sikander Bansi, an unlikely political heir in Delhi, secretly records politicians in Parliament as they haggle to become cabinet ministers, bag defence contracts, dodge criminal charges and collect corporate largesse. Among them is a rising leader of the People’s Party, Nalan Malik, whose success has come through unscrupulous means.

When Sikander suddenly disappears, Mira Mouli, a newspaper journalist with an unusual gift for knowing people’s thoughts, receives the controversial Parliament tapes along with clues to find him. She is attracted to Sikander’s principles and is wary of Nalan’s deceit. But her powers of knowing tell her a different story, one that she can unravel only at the cost of her life”

The book cover is apt and fits the story.The tall-closed gates coloured in black and white with the flying doves are symbolic to the inaccessibility of the temple of ‘Democracy and Freedom’.It also stands for the obliviousness of the General Public to the political happenings.Also reminds us of how black and white complement each other and are interdependent, still being opposites!

The story deals with a ‘know journalist’–Mira caught amidst the release of scandalous tapes.These tapes are set to reveal the truth behind the various Government deals and decisions that are finalised on the pretext of public welfare, economic growth and a country’s development(One needs to read the book to know more about the ‘know’ journalist concept).

Sikander comes across as a rebel against his own father and political party. He is in a similar situation like Mira.Wherein, he does not see anyone around who is his own.The characterization of Sikander is interesting as he is so unlike the politicians we all know! On the other hand, Nalan comes across as a witty politician who does not mind trampling on whoever comes in between him and the chair of power. Yet both these characters are bound and driven by ‘Mira’ who interestingly can interpret their thoughts and decisions.

The language employed by the writer is simple yet effective, especially in the paragraphs- that reveal the tapes, talk about the fate of girls and Mira’s past.

The line ‘There are no homes for girls in this country; girls are tenants everywhere’ specifically stands out.It hits hard and drives home the general apathy towards Women.

The use of metaphors to describe the contents of the tape, rain and the various moods in the story, is commendable and beautiful. A Metaphor like ‘Effigies running the Parliament’ is a veiled assault on our parliamentarians who stray away from their responsibilities.

My Thoughts on The Honest Season

Neelima has been both critical and appreciative of the media through the delusions and apprehensions of the character- Munshi. He is the proprietor of the media house in which Mira works in the story.

As a reader, one cannot brush off the various issues and scams raised in the parliamentary tapes of the story as fiction! Neelima having been a journalist for 20years herself, has brought about an authenticity to the details mentioned in the tapes and one is compelled to believe that indeed politics is murkier than what we expect it to be!

Be it the Kim Sharma tape that reminds one of the Radia Gate or the Lochan Reddy tape reminding of the bitter truth that Andhra Pradesh has been bifurcated for political and corporate benefits, the thin line between fiction and reality in this story is blurred.

The unfortunate Farmer suicide episode in one of the newest political party’s rallies and reading about what went behind the scenes stirred a churn in my stomach!

I found the character of Mira- a personification of truth being pulled apart by her conscience: Sikander and her consciousness:Nalan, on either side. The ‘rain’ that seems symbolic of the wonderful journey of life is the only constant companion of Mira in the story.

Mira’s life can be demarcated and described in a nutshell as resembling the epithet ‘Sat-chit-Ananda‘(described in the Bhagavad Gita) Sat– existence, chit– reflect upon, Ananda–bliss. One cannot miss many more such similarities between Gita and The Honest Season and symbolically Gita does play a part in this book. To know the how and why – one must read the book, as it forms the crux.

While reading the book, I wanted it to be a little fast paced and 20-30 pages short and this has stopped me from showering an extra star on The Honest Season. Also, a strong character like Mira succumbing to her weakness often casts a doubt on the characterisation of the protagonist.

The writer deserves credit for keeping the reader on tenterhooks until the very end as the character sketch of the actual ‘Antagonist’ keeps changing over the chapters. Mira is akin to ‘Arjuna’ of the Mahabharata but is guided by Krishna as well as Chanakya on either side, until the last page!

Reasons to Read – The Honest Season

The Honest Season is an insightful journey into the darker as well as the brighter sides (if any) of Political parties and Power corridors!

In recent times, when citizens are often seen questioning the role played by journalists and the consequences of the various media trials happening around, this story provides the much-needed solace.

A solace of knowing that Journalism is still an honest profession and it indeed is a powerful tool to revolutionize a society and make the wrongdoers culpable ‘If and only if’ used in the Right way!

Do grab a copy to get an insight into how the political parties function and to unmask many of the politicians who have a great following… ‘The Honest Season’ transcends time and is a must this season!

I received this book from WritersMelon in exchange for an honest review.

You may want to read my other book reviews here:Book List

5 thoughts on “The Honest Season by Kota Neelima : Book Review”