The book Shiva in the City of Nectar authored by Preetha Rajah Kannan, was delivered to me a day before Shiva Ratri — an auspicious day marking the marriage of Hindu God Shiva with Paravati. And, I started reading this on Shivaratri (do I term it a coincidence again?).

Although I hail from Madurai and my mother tongue is Tamizh, I’ve never had an opportunity to know about ‘Thiruvilayadal’ though I have heard about a Tamizh movie with the same moniker.

I do not know to read or write ‘Tamizh’  as I went to schools other than in Tamil Nadu. So I was actually very thrilled to get an opportunity to read this book, which is an English translation of the Tamizh Thiruvilayadal.

Note :
Disclaimer: I received a free copy of the book ‘Shiva in the City of Nectar’ from the publishers, in return for my honest review. I have NOT received any monetary compensation for the same. 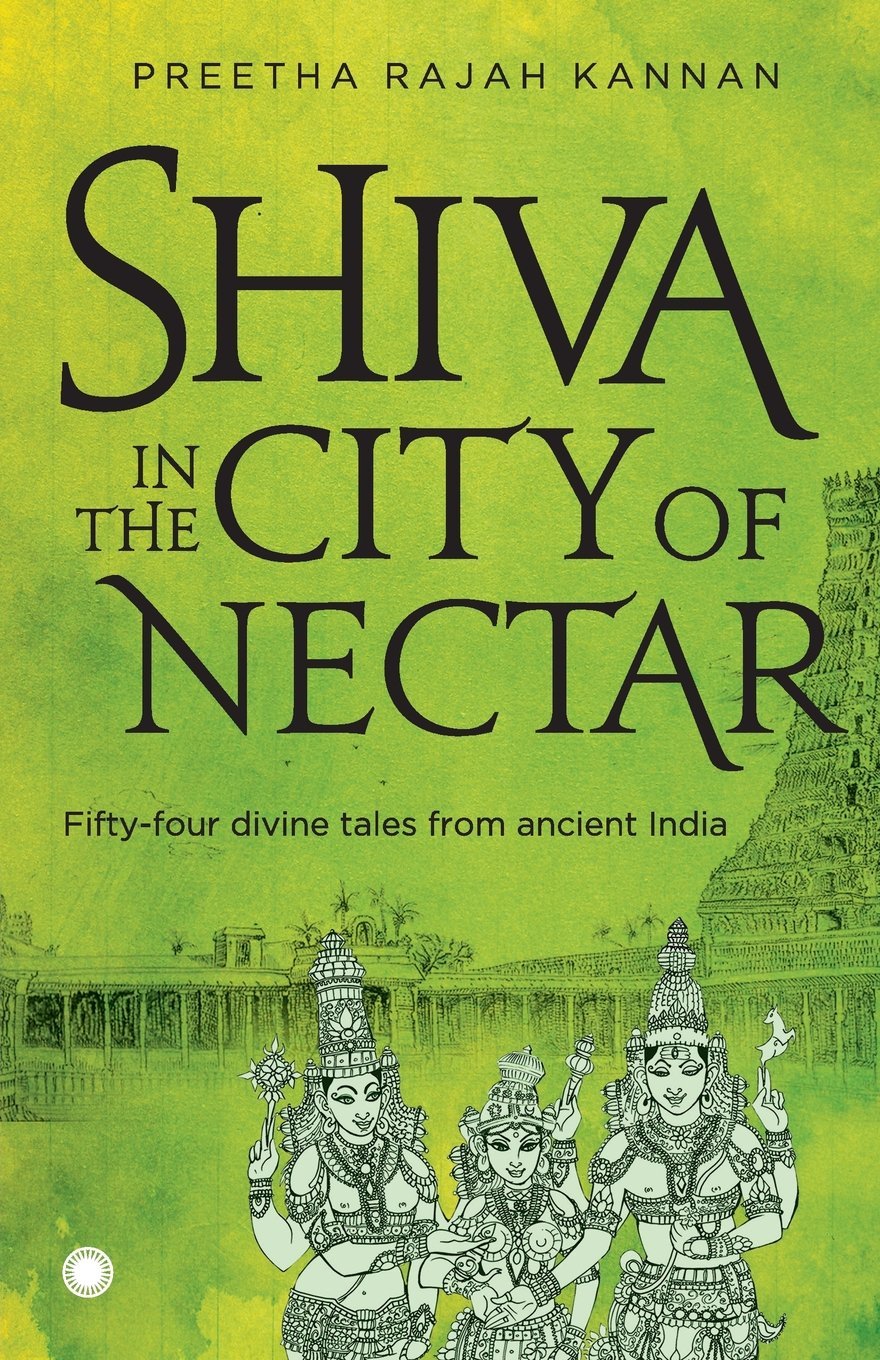 My review of Shiva in the City of Nectar

Let me start this review of Shiva in the City of Nectar, with the book cover and the blurb.

A glimpse of the book cover

The book cover of Shiva in the City of Nectar rightfully depicts an illustration of ‘Vishnu giving his sister Meenakshi’s hand in marriage to Sundarar’ which is so very synonymous with the City of Nectar, Madurai.

Browse through the blurb

The blurb gives an insight into what to expect from the book Shiva in the City of Nectar, and the stories inside the pages do justice to the excitement generated by the blurb.

“Throbbing with non-stop excitement,  Shiva in the City of Nectar sweeps across Heaven, Earth, and the Underworld, narrating the exploits of the mysterious and powerful blue-throated god.

One after another, the tales unfold the follies of ancient devas, asuras, sages, men, and mythical beasts. And through them all, Shiva blithely takes on the guise of a beggar, saint, monarch, merchant, fisherman, hunter, warrior, and woodcutter; walking through the three worlds to slay rampaging demons, perform his Dance of Bliss and embrace good and bad alike.

Shiva is portrayed in all his multi-faceted mystique – the tender lover who woos and weds  Goddess Meenakshi; the eternal Guru who dispenses wisdom; the fierce avenger whose third    eye flashes fire; the generous benefactor who showers blessings on his devotees; and, above all, the gentle prankster who embodies the essence of Vedic faith”

A look into the language used by Preetha Rajah Kannan

The language used in the book ‘Shiva in the City of Nectar’ by Preetha Rajah Kanna, is simple English interspersed with Tamizh words. Thus adding the right feel to the stories.

Else, how can the world know about one of the foremost Classical and Dravidian languages of Tamizh!

I feel the usage of Tamizh words in this book adds authenticity to the 54-tales depicted. The writer has very rightfully added a ‘glossary’ of terms at the end of the book, which is very crisp, handy, and helpful to non-Tamizh readers.

The 54-tales give an insight into the ancient scriptures dealing with Shiva, his ‘Thiruvilayadal’(Sports of God) in and around the City of Nectar-Madurai, the way this glorious city came into being, and about the magnanimity and the anger of Shiva which compliments him and makes him so loved among his devotees.

I personally feel the 54 tales bring out the ‘Navaras’ (nine emotions) of Shiva in all his glory. I am sure the readers will be delighted to know about ‘how the city of nectar came into being’, its divinity, and how the city has drawn devotees and people from far-flung places even in the ancient times!

While reading through the tales, I relished the rich cultural heritage of Madurai while also grousing about the lack of actual pictures of the present Madurai in the book.

For example, while reading about ‘Pottramarai’ or ‘Yanamalai’ I wished that there were reference shots of the ‘spots’ mentioned thus assisting the splendid reading (I had to ‘Google’ to check out the references).

Also,  while reading one will surely be saddened by the present state of such rich heritage sites, owing to repeated stripping of India’s riches by the Mughals, the Britishers and now by the politicians!

This book is a great read for storytelling sessions, tourists, pilgrims, and general readers interested in religion and spirituality. Go for it…to relive the glorious bygone era of  Madurai, which I feel talks a lot about the writer whose aim of making this book fascinating and attracting the tourists to the city after reading it, will surely be successful. This book is a compilation of 54-tales of divinity-unadulterated!

On my next trip to Madurai, I am sure to take along this book and check the various aspects mentioned in the tales, that have been judiciously and keenly bookmarked by me.