An Autograph for Anjali, by Sundari Venkatraman, is an attempt to dwell upon all these presumptions and bring out the ‘actualities’ — the rich have it all easy; money and fame bring happiness; a marriage is sealed after one successfully overcomes the ‘seven-year itch’.

These are statements that people often repeat at length. But are these statements – true or a myth?

Here is my honest review of this beautifully narrated story called ‘An Autograph for Anjali’. 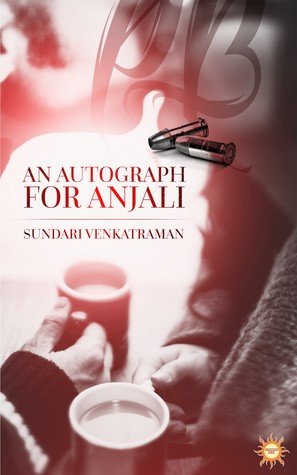 Book Review: An Autograph for Anjali

The book cover is apt and suits the story. The relevance of the letters ‘PB’ on the cover forms the crux of the story. Also, the blurb gives a glimpse into what to expect from the book :

“Jayant Mathur is found murdered in his bed, shot at point-blank range with his own revolver. Though she’s extremely disturbed by his death, Jayant’s wife Anjali is way more upset about something else. Who stands to gain by killing the multi-millionaire businessman?

Parth Bhardwaj is a friend and neighbour of the Mathurs. Parth is an author who goes by a pseudonym. He appears more than a friend to Anjali; while he’s also on good terms with her son Arjun who lives and studies in the UK. What role does he play in Anjali’s life? Jayant’s relatives are curious to know.

Jayant’s brother-in-law Rana is convinced that Parth and Anjali are the murderers. But Inspector Phadke has his own doubts about this theory. In comes Samrat, the private detective who appears as quiet as a mouse. Will he be able to find the murderer? Will Anjali find happiness and peace?”

An Autograph for Anjali: Realisation of Self-Worth

The story starts with the crime scene at a posh Mumbai locality wherein Jayant is found murdered in his own house but his wife Anjali is unaware of the happenings till the servant of the house discovers the murdered body of Jayant.

The events that follow bring out the harsh reality of relationships when it comes to property, in the face of death in the family. How and why Jayanth has been murdered, forms the rest of the story.

The language and characterisation in the book

The language used in the book is simple and colloquial. The character of Anjali is a personification of perseverance supported aptly by Parth and Arjun.

Coincidentally, the names ‘Parth’ and ‘Arjun’ mean the same- ‘A person who never misses his target’ and in the story too, both Parth and Arjun strive towards Anjali’s happiness and her relevance.

The characterisation of Parth and Arjun are similar and interesting. The transformation of Anjali as the story unfolds is encouraging and justifiable.

What didn’t work for me in ‘An Autograph for Anjali’

Even though the blurb promises the book to be a romantic thriller, unfortunately, it falls short of a gripping read. A reader can very well guess the identity of the murderer as the story progresses.

Sadly, the introduction of a detective turns a drub. The word ‘blanched’ has been overused to express the same emotions, so much so, that I wished the book could have had some better editorial work.

What worked for me in ‘An Autograph for Anjali’

However, the writer — Sundari Venkatraman, should be lauded for taking up a sensitive subject like ‘marriage and adultery‘ and justifying the decisions taken by the characters with her wonderful narrative.

Aspects of depression and loneliness, experienced by women due to negligence shown by family members have been dealt with utmost care and sensitivity by Sundari Venkatraman.

Parting Words on An Autograph for Anjali

Through this book An Autograph for Anjali, Sundari Venkatraman sends out a strong message that it does not matter for how many years a woman has been part of the institution called ‘marriage’, she can and should walk out of it if she feels that her identity is being threatened.

This applies to women from rich families too, because money and fame aren’t always the means to happiness. Love and affection triumphs over everything at the end! Go for this book this weekend, for a quick and relaxing read.

Title: An Autograph for Anjali

Read Why do I take my own time to review books? 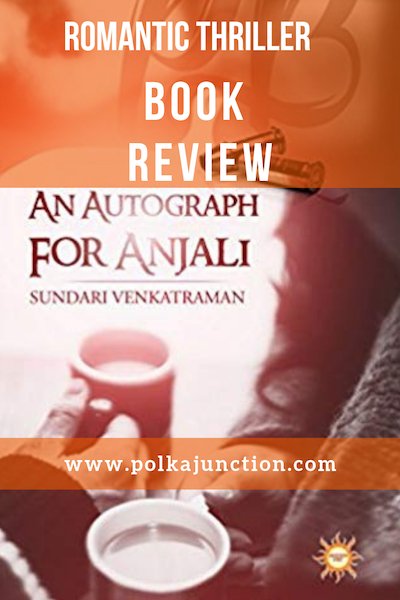 In 2014, Sundari self-published The Malhotra Bride (2nd Edition); Meghna; The Runaway Bridegroom; Flaming Sun Collection 1: Happily Ever Afters From India (Box Set), and Matches Made In Heaven (a collection of romantic short stories).

2015 brought yet another opportunity. Readomania came forward to traditionally publish this book – The Madras Affair – a mature romance set in Madras.

An Autograph for Anjali, a romance with a touch of suspense, is also a self-published novel. Going a step further, the author has published the paperback version through Notion Press.

4 thoughts on “Book Review : An Autograph for Anjali by Sundari Venkatraman”