‘Hell to Pay’ is the 7th book in the ‘What Does Not Kill You’ series. I downloaded a Kindle version of this book through the link sent by TheBookClub in exchange for my unbiased and honest review.

Book Review of Hell to Pay 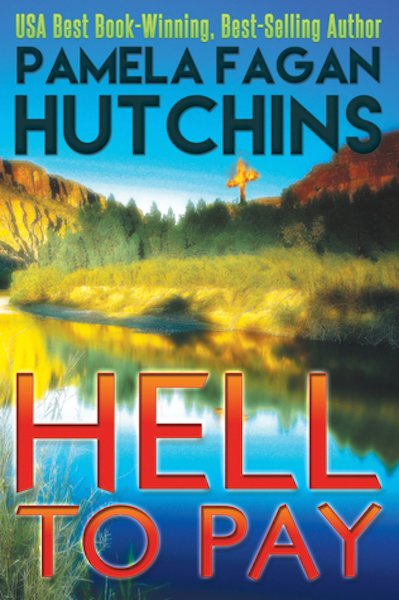 The ‘Blurb’ blurts out the suspense to be unearthed across the pages and the burning cross on the book-cover heightens the suspense surrounding the blurb!

Big-haired paralegal and former rodeo queen Emily thinks she’s got her life back on track. Her adoption of Betsy seems like a done deal, her parents have reunited, and she’s engaged to her sexy boss Jack. Then client Phil Escalante’s childhood buddy Dennis drops dead, face-first into a penis cake at the adult novelty store Phil owns with his fiancée Nadine, one of Emily’s best friends. The cops charge Phil with murder right on the heels of his acquittal in a trial for burglarizing the Mighty is His Word church offices. Emily’s nemesis ADA Melinda Stafford claims her witness overheard Phil fighting with Dennis over a woman, right about the time Phil falls into a diabetic coma, leaving Nadine shaken and terrified. Meanwhile, Betsy’s ultra-religious foster parents apply to adopt her and Jack starts acting weird and evasive. Emily feels like a calf out of a chute, pulled between the ropes of the header and the heeler, as she fights to help Phil and Nadine without losing Betsy and Jack”.

The story is narrated in the first person by ‘Emily’ – the female protagonist. The book starts with a party scene in which some of the lead characters are introduced and the plot thickens in the very first chapter with the death of Dennis. We get to understand that the characters are an extension of the previous books of the series. However, the reader will be able to understand the roles played by the characters in the story and their past as the story progresses, which is appreciable of the writer’s thought process.

What I particularly loved about this book, is the characterization. Be it Emily, Jack, Wallace, or the other characters, each one’s role is definite and helps the story to move forward and in one way or the other revolves around helping the protagonists. Jack comes across as a multi-talented and multi-tasking male and his character has this aura of goodness and calmness around him that will make a reader drool over him! Emily, on the other hand, is the fiery typed female who is always on the edge and who can crack the whip on the not so religious ‘Mighty is His Word’ church as well as handle the rattle-snakes with ease! Still, the one thing that she cannot handle is her feelings for Jack!

Some of the descriptions like that of the dogs and the often-repeated comments on the ‘braces’ look out of sync and undesirably contribute to the length of the story. However, apart from churning out a wonderful thriller, the writer should be commended for the wonderful description of the countrysides of Texas, the minute detailing of scenes and characters. ‘Emily’ comes across as a person who doubts her own potential and talents, still, Pamela makes a Hero out of her when the occasion arises. This makes the characterization realistic and relatable. Almost till the end, a cloud of doubt hangs on Phil, Nadine and the people associated with them on their involvement in the murder of Dennis and this keeps the reader on the edge. Every character in the story is related to unraveling the plot.

The language used by Pamela is at times hilarious especially at the places where there are monologues and the cuss-words introduced are a creation in itself! I could so relate with this side of Emily as I too invent such new cuss-words often so as not to be offensive 😉 Some lines from the book which tickled me are as follows:

“Dimples that put a double exclamation point at the end of her smile”.

My take on the book

The intertwining of romance and thriller moments in the story is commendable. However, at times I felt that Pamela could have added some more romantic scenes as the romance displayed by the protagonists is sweet and subtle yet the scenes end abruptly leaving the reader to empathize with Emily! (I guess, this is what Pamela intended the effect to be on her readers).

Underneath the layers of romance, suspense, family sentiments, and drama is a strong message on today’s boiling issue of ‘religion’.Pamela, through her protagonists, sends a strong message against religious institutions that misuse common people by playing upon their beliefs and sentiments. Also informs the reader that God ‘is’ and ‘will’ be always on the side of the ‘Truth’ through her character -Emily, as she says the below lines:

“Dear God, please forgive me for wanting this to be the takedown that self-righteous witch deserves. He didn’t answer, but I wasn’t struck by lightning either, so I figured he was taking my side on this one”

I thoroughly loved reading this book and unraveling the layers of the plot. Do grab a copy to unearth the suspense and fall in love with the characters- especially Emily and Jack and to appreciate the father-daughter relationship in the story!