I’ve been fascinated by historical figures, antiquity, and Indian heritage since childhood. So, when I received a request from Rupa Publications to review the book ‘Battles and Warriors’ by Subhadra Sen Gupta, I just grabbed the opportunity.

Note
The review of Kings and Queens, another book in the series ‘Exploring India’ by Subhadra Sen Gupta has also been posted on my blog. 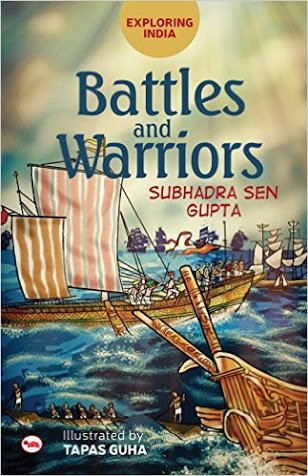 My review of Subhadra Sen Gupta’s Battles and Warriors

The book cover, as well as the book title, are apt.

A glimpse of Battles and Warriors

The book cover depicts the Indian warriors at sea and reminds the present generation that we were also a rich and courageous country once, who conquered other countries without suppressing or torturing the citizens!

Browse through the blurb

The blurb more or less gives an idea about ‘Which of the Battles and Warriors’ we can expect to read in the book.

” The Exploring India series of books are delicious, bite-sized portions of history that will interest every reader who wants to know more about various facets of India.

Battles and Warriors take the reader on a journey through the events that led to, and the descriptions of, five major battles that took place in India: Alexander vs Porus, Ashoka vs the Kingdom of Kalinga, Rajendra Chola vs the Kingdom of Srivijaya, Babur vs Ibrahim Lodi and Siraj-ud-Daula vs the East India Company.

Find out why these battles occurred, the strategies that were employed, the arms and armour used by the warriors, the after-effects of these battles, and how they shaped the course of Indian history.

Concise yet filled with relevant details and accompanied by attractive colour illustrations, the Exploring India series will make history fascinating and unforgettable for every reader”

What to expect from Subhadra Sen Gupta’s narration

The book on Battles and Warriors delivers more than expected. The descriptions of the wars, the strategies used by the warriors, and the planning behind the conquests have been written effortlessly by Subhadra Sen Gupta.

The brevity of this book makes it easier to interpret and, children are bound to enjoy, and be awed by our rich Indian History!

Parting words on Battles and Warriors

I particularly loved the illustrations by Tapas Guha. Be it the garb of the warriors or the weapons, each of these has been illustrated so well that the reader need not refer to other resources for clarity or details. The pictures are eye-capturing, colourful, and self-explanatory.

This book makes an interesting read for adults and is a good source to know much more about the unchronicled glory of our country. I for one had never read about ‘SriVijaya’ before, but this book helped me to widen my horizon!

Overall, this book by Subhadra Sen Gupta is a thoughtful attempt to kindle a child’s appetite for Indian History. And, it sure does by being the perfect appetizer!

By the way, do you know the connection between Gwalior and the ‘Kohinoor’? If not do grab a copy of this book to know about it and to read many more such unknown facts about our Indian ‘Battles and Warriors’!

My son aged 9, started reading the book after finding it interesting as he skimmed through it.

Lately, at school, they are being taught how to write a book review, hence he did write about what he understood and liked about the book.

This is what he has to say – “I liked the story of Alexander and Porus very much. The story was very good. I liked the drawings and war scenes. I liked one Army man in Alexander’s group as his sword was big! I liked how Alexander conquered half of the world!”

Useful information about the book

Title of the book: Battles and Warriors