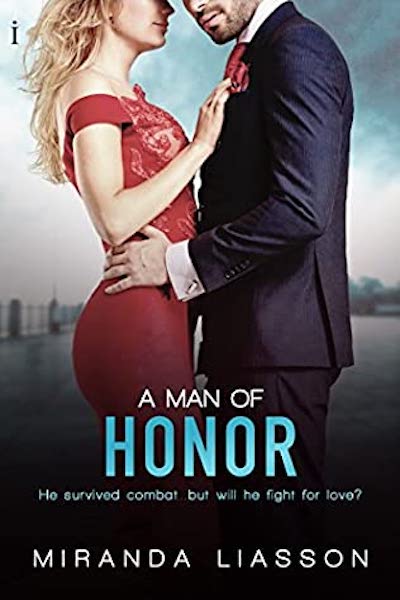 My all-time favourite Play being ‘Arms and the Man’ and I being a military wife, I was tempted to choose the book ‘A Man of Honour’ – by default, when an option was given to choose between two books for review.I have been sent a kindle copy of the book by the publishers in return for my honest review through NetGalley.

‘A Man of Honor'(#AMOH) written by Miranda Liasson, is a feel-good Romantic story about a War veteran turned venture capitalist ‘Preston Guthrie’ and his best friend’s sister ‘Catherine Kingston’. This book is part of the Kingston series, the first of which as I understand dealing with Catherine’s sister. However, the characterization and story of ‘AMOH’ is set in such a way that a reader will be able to associate with the storyline even if one has not read the previous book in the series.

The blurb gives an overall idea as to what to expect from the book:

“Former Army Captain and venture capitalist Preston Guthrie have always had a thing for Cat Kingston, but he never felt like he could date his best friend’s sister. Plus, he’s a wrong-side-of-the-tracks guy and she’s a white-picket-fence kind of woman. Yet when they met again just before he was deployed, sparks flew. A fire ignited. And the heat was hot. For the first time, he thought a relationship with her might be possible…until an injury in the war changed everything…

Journalist Cat Kingston had a rough couple of years, surviving a broken engagement and the loss of her job. But connecting with Preston last fall seemed right. They shared steamy Skype sessions while he was overseas—until he was wounded, and cut her off without explanation. Now he’s back in town to be the Best Man for her sister’s wedding…and she wants answers.

Preston’s struggling with a leg wound, but the war-scarred him on the inside, too. When Cat pays him a surprise visit and her brother catches them in a compromising position, Preston tells him they’re dating. He’s not sure how he can spend the entire wedding week fake-dating her when the chemistry between them feels anything but.”

The story is narrated in the third person and the narrator is omniscient making sure the readers are kept informed about the reasons for the events and actions taking place in the lives of the characters. Apart from love and romance, the writer has weaved her story around aspects like loyalty, honesty, family values, family support and given importance to these in an age when these are on the brink of deterioration.

The pace of the story catches fire in the latter half and I adored the way everything falls into place in the climax. However, I am a little disappointed with the book cover.I personally feel it’s a misfit to the storyline and looks more of a magazine cover flaunting a supermodel!

The writer needs to be commended for bringing out the ’emotional and mental’ turmoil a wounded soldier goes through and how diligently with determination and perseverance he/she has to put the broken pieces of his/her life together. To achieve normalcy, to bash and overcome feelings of incompetence and insecurity, the support and effort of a soldier’s loved ones is a must and this ‘Love’ acts as a balm to subside the mental and physical pain a soldier goes through and rekindles the hope in him/her. All these aspects have been wonderfully portrayed by the writer.

I particularly found certain smilies, metaphors, and descriptions humourous which are as follows:

Yet even now Robert seemed like nothing more than a mosquito bite compared to the total body-and-soul devastation wreaked by Hurricane Preston.

She forced herself to speak past the virtual wad of cotton in her throat.

I loved the character of Catherine who in spite of being an ‘all giver’ rises to the occasion taking charge of her life when the time comes. Her loyalty, her chemistry with Preston, her relationship with her family members and friends, makes her a very strong female protagonist of the story. On the other hand, Preston comes across as a typical Military ‘Gentleman’ — loyal, tough yet tender-hearted. The steamy romantic scenes between him and Cat adds oodles of oomph to the storyline yet there is a feeling of sweetness while reading these scenes like the sugary feel one relishes while savouring the sprinkles on a doughnut! I thoroughly enjoyed reading this book.

Title of the book: A Man of Honor