Bakrota Hills nearby Dalhousie has been the living connect between West Bengal and Himachal Pradesh. Yet the historical significance and contribution of Bakrota Hills to the Indian freedom movement remains widely unknown.

During my two year stay in Dalhousie, I trekked extensively around Bakrota Hills and its surroundings, interacted with local people, and got to know a handful of information related to the connection between Bakrota Hills and Bengal.

So, come with me as I take you down the memory lane, share with you some interesting facts about Bakrota Hills and Dalhousie, and also give a virtual photo tour of these hill stations in Himachal Pradesh.

Additional Reading
Read about the Dogra cuisine of Jammu and Himachal in our write-up around traditional and authentic Indian Sweets and Desserts.

Life in the mountains amidst thriving pines, deodars, rhododendrons, spruce and other flora and fauna interspersed with wooded trails is in itself a meditative and medicative process. More so for urban dwellers who find themselves surrounded by frondescence all of a sudden.

At first glimpse, on a visit to Bakrota Hills near Dalhousie, this lushness and the azure skies with breathable pure oxygen is too much of an excess, indulgence and opulence that remains just another spectacle.

But as time goes on, a realization sets in that this is reality and everything else is a farce — the glassed malls, the unending consumption of things, the hobnob and the vanity fair, the mask that we wear for social acceptance, the pretence and the diplomacy in our everyday conversations, everything…I mean every single aspect, action, and adventure of urban dwelling!

And, this, precisely is the reason why I call living in the mountains, especially in as pristine a place like Bakrota Hills, as a meditative process. But then not all of us can afford to live in such postcard-perfect places, right? However, a short sojourn is perfect to rejuvenate our senses too.

While exploring the Bakrota Hills, one is bound to find inner peace, adding some zing to the mundane, and regain calmness as a sense of tranquillity sets in. Of course, it is medicative too in the mountains of the nearby Dalhousie as known from historical records of this place.

The life of the great poet and Nobel Laureate Shri Rabindranath Tagore as well as of freedom fighter Subash Chandra Bose from Bengal is proof of this.

They would have vouched for this when it comes to Bakrota Hills and Dalhousie, and their verdure. Wondering how? Well, read on about their connection with Dalhousie and Bakrota Hills in Himachal Pradesh.

But before that let me give a brief description of the history of Bakrota Hills and Dalhousie.

Know the history of Dalhousie

More than 160 years ago, Dr. Blemenger of the 49th Native Infantry supposedly trekked to the Pir Panjal Ranges in search of a place with cool climes for a ‘convalescent depot’.

This idea of a retreat was suggested by Engineer Robert Napier, someone who is also associated with the Lucknow Mutiny.

Lord Dalhousie is accredited with sanctioning this idea of Napier. Some say that Lord Dalhousie supposedly came to this place between 1850-1852 and saw to the execution of the plan while some say he was the Governor of Bengal at that time, and he actually never made it to the hills of Himachal owing to the distance from Bengal!

According to the pact, five hills of Chamba namely Batur, Kathlag, Potreyn, Tehra (Moti Tibba), and Bakrota Hills were acquired from the Raja of Chamba for the sanatorium. For this, the annual tribute of Rs 12,000 due from Raja Sri Singh of Chamba was reduced to Rs 5,000!! Finally, in 1854 the Imperial Government gave sanction to the project.

I can’t but despise the treacherous ways of the colonisers to occupy the lands of the natives by a reduction in the unlawful taxes imposed on the natives. Ironical, indeed… Sigh!

And, trust me when I say that I am more than glad that the British rule is history now.

Dalhousie’s history and its impact on Bakrota Hills

Within eight years of the implementation of the pact and accession of the hills including the Bakrota Hills, the hill-station of Dalhousie was fully functional with British styled cottages, churches, and buildings that served the colonisers.

Thus, a hill-station with all elements of England reminiscences was developed, apart from a sanatorium for the convalescing troops of the Imperial Army. The troops thus found solace and recuperation amidst the cool climes of the five hills that make up the quaint town of Dalhousie.

Soon, a convent run by Belgium nuns too was established to spread English education in the hills and this is what now stands as the iconic Sacred Hearts Convent nearby the Subash Chowk.

Bakrota Hills and its connect with Bengal

The lush and the viridescent Bakrota Hills of Dalhousie have played a major role in the lives of a handful of Indian Freedom fighters. Two such personalities whose lives have had an impact by their stay in Bakrota Hills and Dalhousie as such are Rabindranath Tagore and Subash Chandra Bose.

It is interesting to learn that Tagore and Bose had lived in Dalhousie for over six months, thus affirming the Bengal bond with Himachal Pradesh.

A trek around the Bakrota Hills gives a glimpse of the lush Punjab plains with rivers Ravi, Chakki, Chenab flowing across on one side, and the deep valleys of Himachal encompassing Chamba, fondly cuddled by the Dhauladhars and the Pir Pinjal, on the other side. While a little afar is located the ancient Basohli region of Jammu and Kashmir territory.

I was surprised by the innumerable tourists from Bengal who visit Dalhousie. And, their first stoppage often would be at the statue of Netaji Subash Chandra Bose near Subash chowk.

This observation made me pose questions to local people and after a bit of research, I got to know the rich history of this wonderful place. Also, a couple of Bengali families have settled in Dalhousie, whom I used to meet during my walks.This piqued my curiosity about the history of Dalhousie and Bakrota Hills.

This curiosity made me visit Bakrota Hills wherein I gathered that Tagore as a child had accompanied his father to this quaint hill-station of Dalhousie and had stayed in the Bakrota Hills. 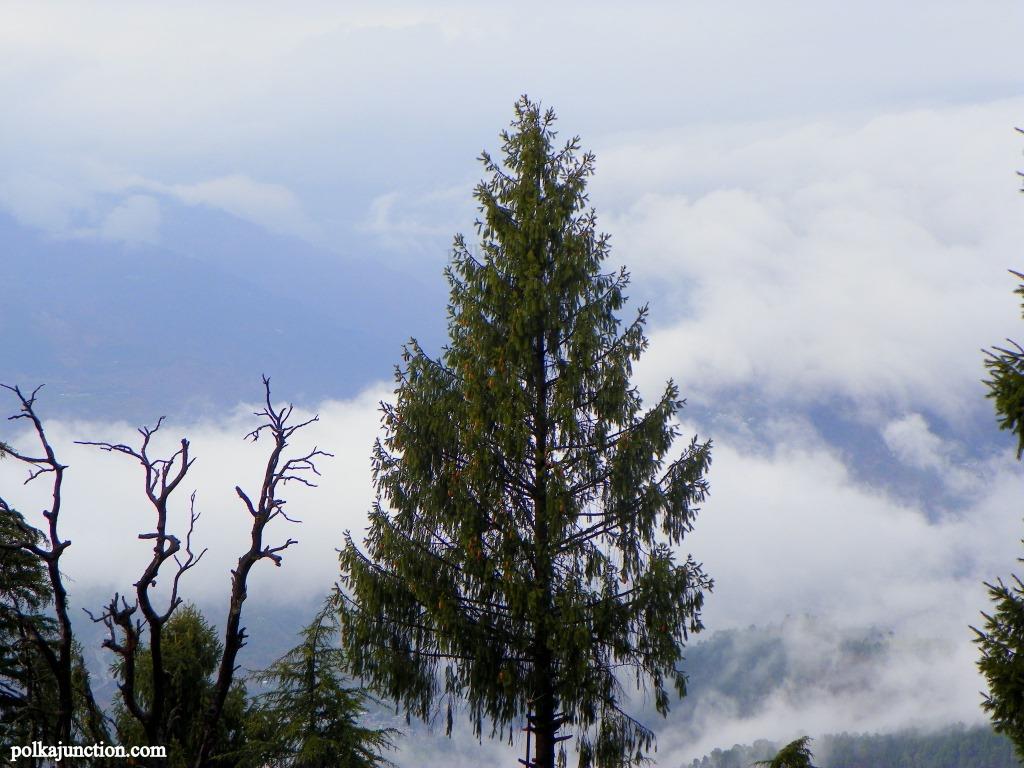 Get to know Bakrota Hills through Tagore’s words

Tagore fondly discusses his time spent in Bakrota Hills and the pristine Dalhousie in his book ‘My Reminiscences’. Here is an extract of the same:

“The house we had taken at Bakrota was on the highest hill-top. Though it was nearing May it was still bitterly cold there, so much so that on the shady side of the hill the winter frosts had not yet melted.

My father was not at all nervous about allowing me to wander about freely even here. Some way below our house there stretched a spur thickly wooded with Deodars. Into this wilderness, I would venture alone with my iron-spiked staff. These lordly forest trees, with their huge shadows, towering there like so many giants–what immense lives had they lived through the centuries! And yet this boy of only the other day was crawling round about their trunks unchallenged. I seemed to feel a presence, the moment I stepped into their shade, as of the solid coolness of some old-world saurian, and the checkered light and shade on the leafy mould seemed like its scales”.

You may want to read the complete text that establishes the Bengal connection with Bakrota Hills, at the link below:

Tagore and his father had lived at a place called Snowdon on the Bakrota Hills during their visit to Dalhousie. A plaque has been placed at this place now, confirming the historical connection of Tagore and Bengal with Bakrota Hills Dalhousie. 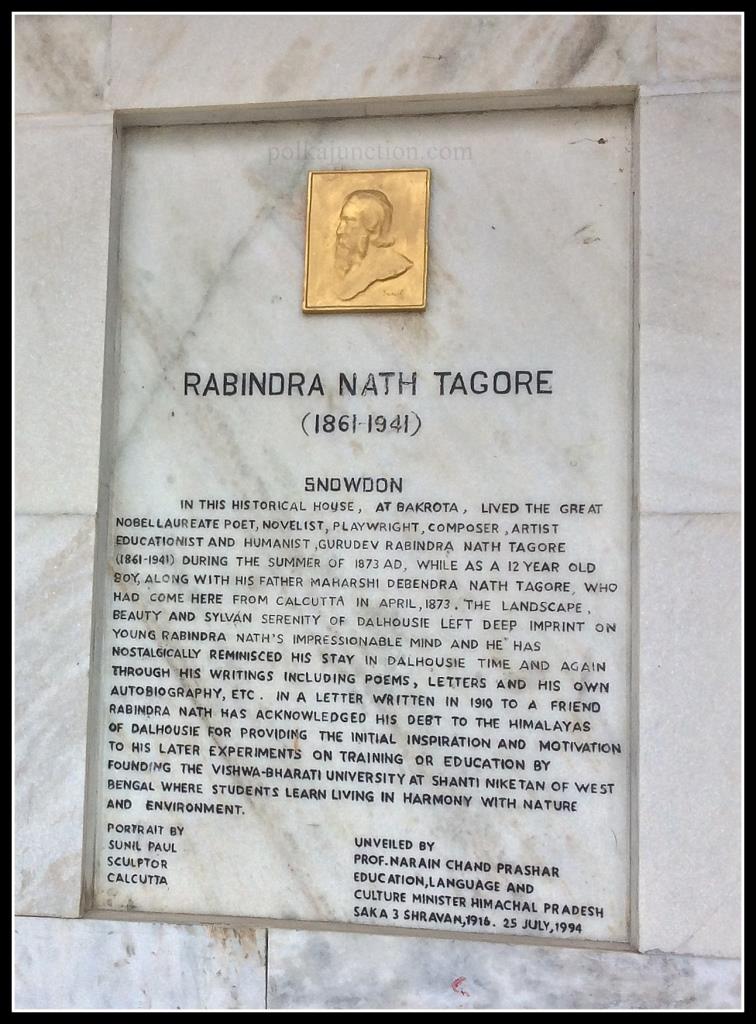 Browse through a few snapshots of Bakrota Hills

The trail around Bakrota hills is a photographic depiction of Tagore’s words in his book.

Here are a few captures of the Bakrota Hills, although these photos can never do justice to the actual beauty of this place. 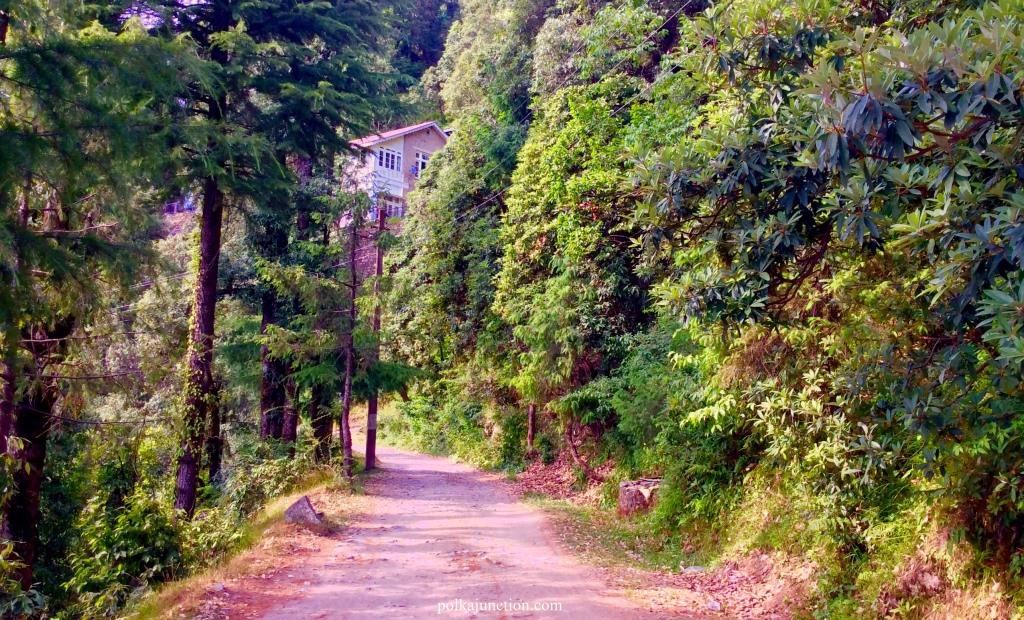 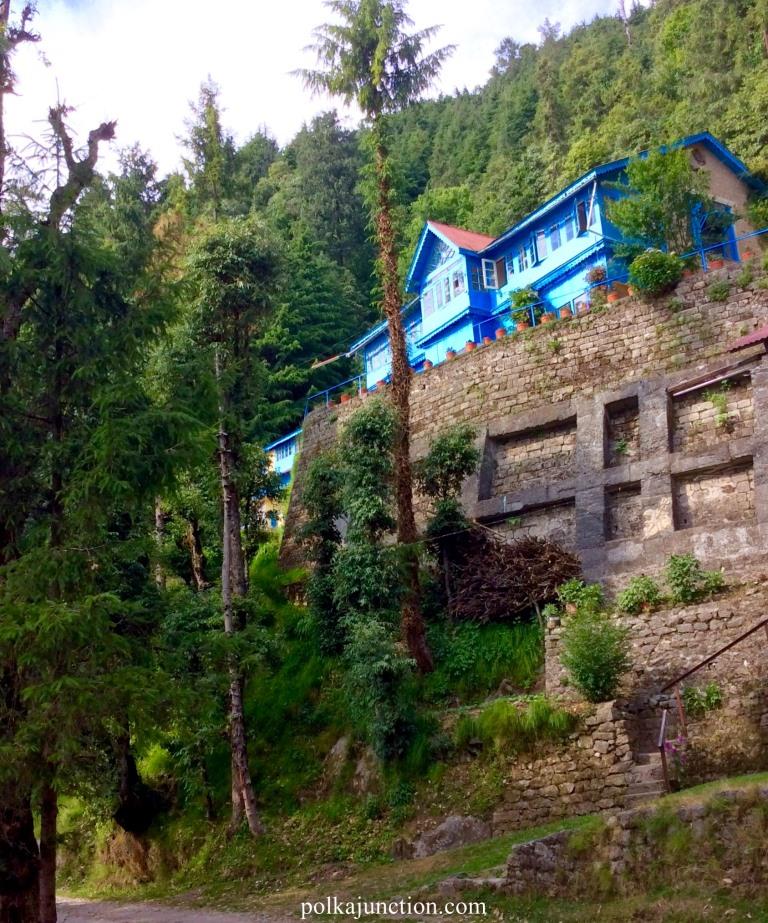 While Tagore had visited Bakrota Hills Dalhousie as a child, Subash Chandra Bose is believed to have visited this place while he was fighting for freedom from the British.

Local people believe that the waters from a spring in Dalhousie had cured Bose of his illness tuberculosis. This spring is coincidentally located on a down-side trek around the Bakrota Hills Dalhousie.

Regular consumption of these waters during his recuperation has had therapeutic effects on Bose. And, his health is said to have improved for good. This spring is now called ‘Subash Baoli’.

It was during his recuperation that Gandhi had sent Miraben to Dalhousie to check on Bose’s health. The below photo is from that visit of Miraben.

Sadly, not much is left of the Subash Baoli now, except, a pipe through which the water flows out. However, the surroundings are beautiful and the trail to this place from the Dalhousie GPO is picturesque. 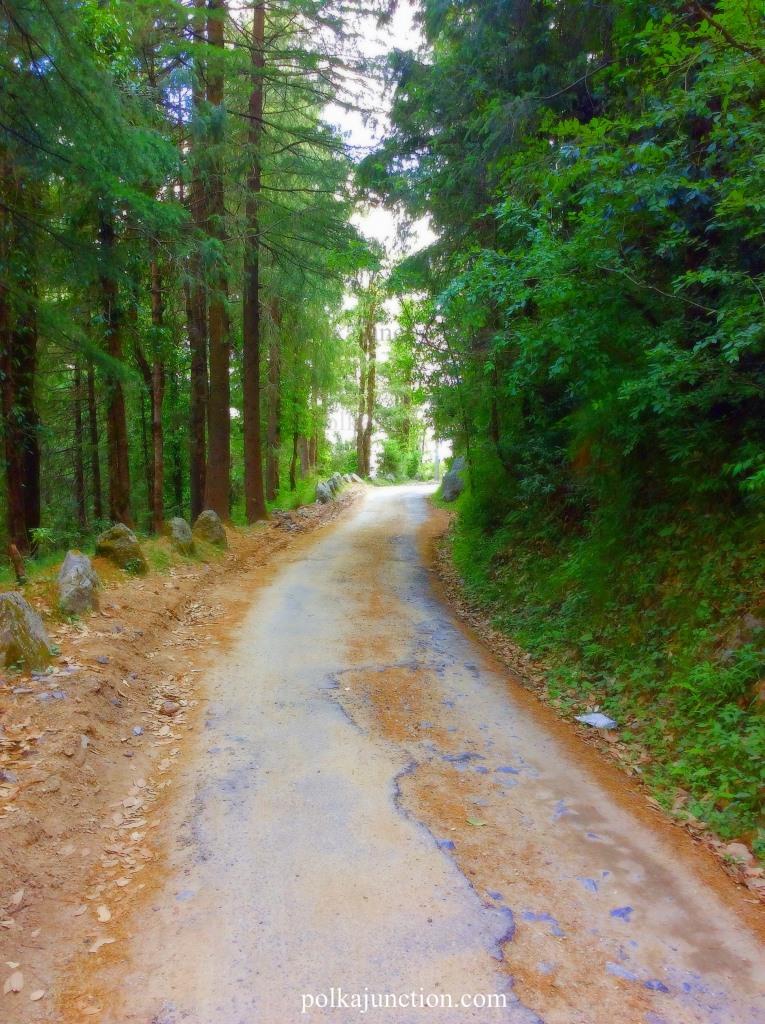 The trail to a village by name Karelun passes through Subash Baoli and it is one of the must-do trails while in Dalhousie.

This walk to Karelun is rich with lush pines on one side and beautiful flora and fauna of the Bakrota hills on the other. Also, do not be surprised if you get to meet a couple of affable Bengali families on this route!

This path looks mesmerizing in winters with snow filling the meadows here. We usually embarked on the Karelun trail during the Dalhousie winters to enjoy the views. 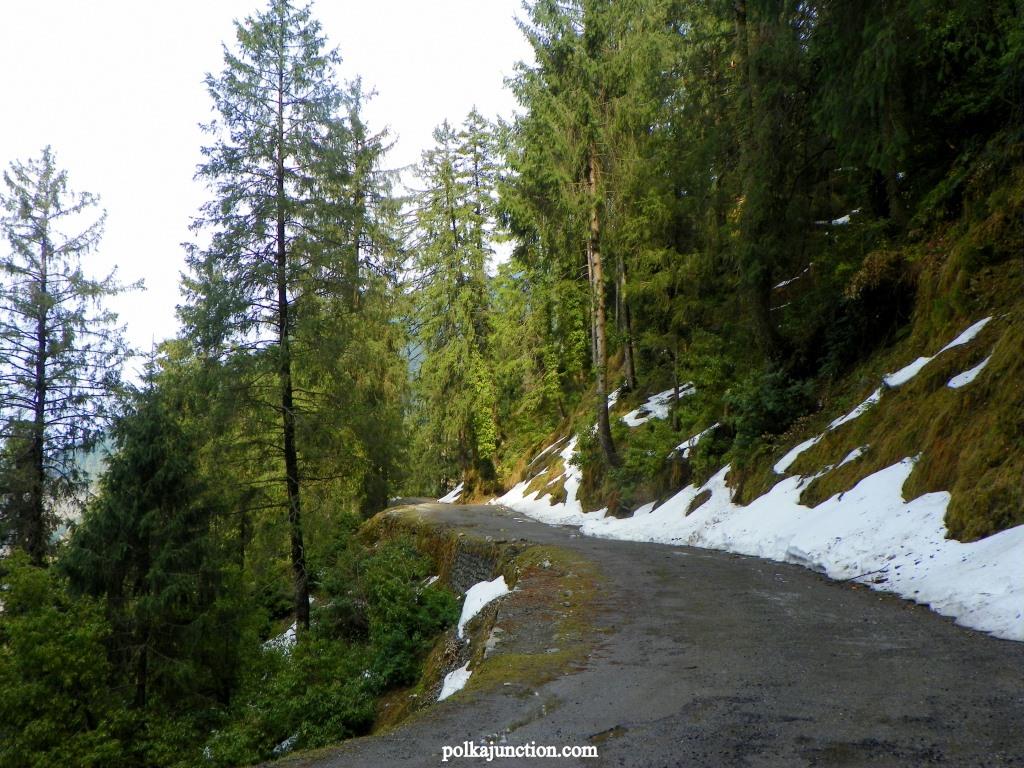 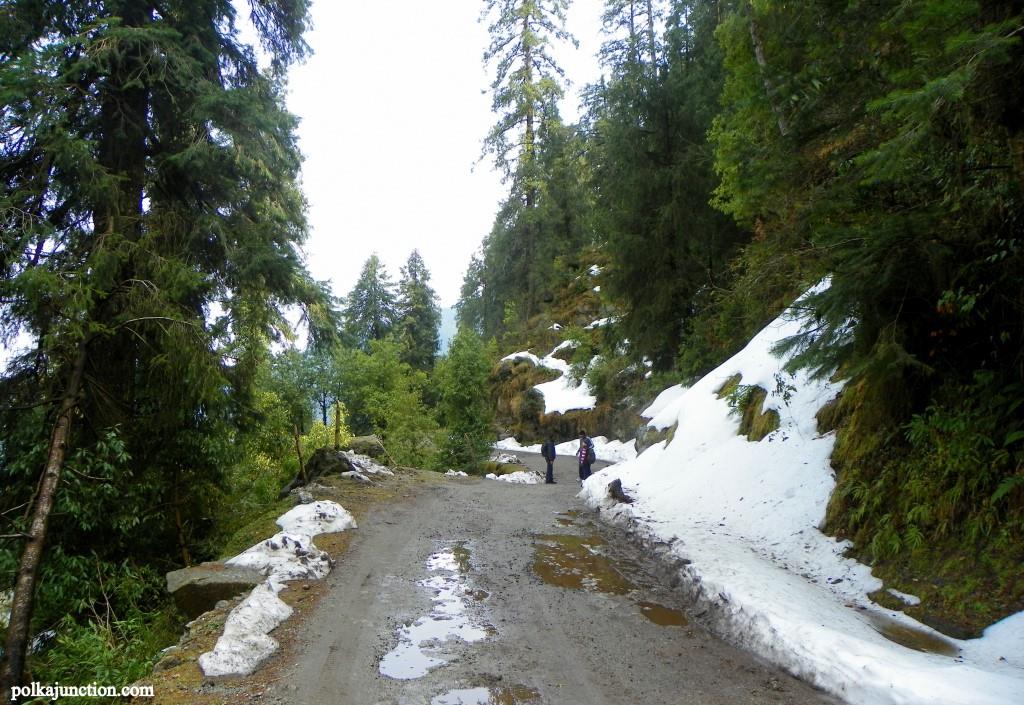 Dalhousie’s tribute to Tagore and Bose

A hotel on the Mall Road of Dalhousie, by the name ‘Mehar’, claims that Bose had stayed with them during his recuperation. Very much possible, because it is one of the oldest hotels in Dalhousie and is at a walkable distance from Subash Baoli!

As a tribute to these two freedom fighters, Dalhousie has cross-roads or chowks named after them. Subash Chowk and Tagore Chowk still exist in remembrance of the two great leaders of India and their short sojourns at Dalhousie.

Oh! by the way, during our short stint at Dalhousie for over 18 months, our home was perched on the Tehra( MotiTibba) out of the five hills that together comprise of the hill-station of Dalhousie.

Dalhousie and Bakrota Hills — Then and Now

Dalhousie still has a sense of tranquillity and peace that enchanted both the Indian freedom fighters and the Britishers alike. However, in these modern times, this enchantment is restricted and is only during the off-season and the weekdays!

The months of May to August are chaotic owing to un-ending traffic snarls all around the five hills. This is largely due to the influx of tourists from Punjab.

The weekends around the year are tumultuous too. Parents of GenX studying in the handful of Dalhousie boarding schools, descend in their fancy cars onto the hill station and create quite a stir.

As a local, I dreaded this the most. A route that took less than 10minutes by walk, on normal days, ended up as 30mins. And, resulted in a detour around two hills during those chaotic times! 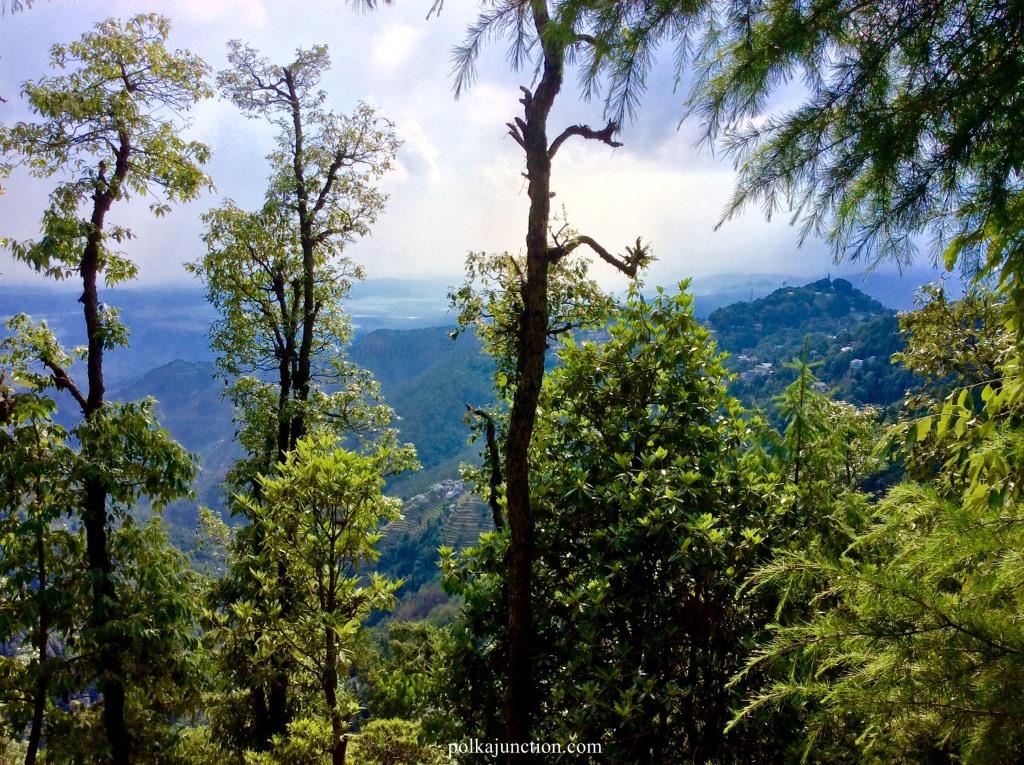 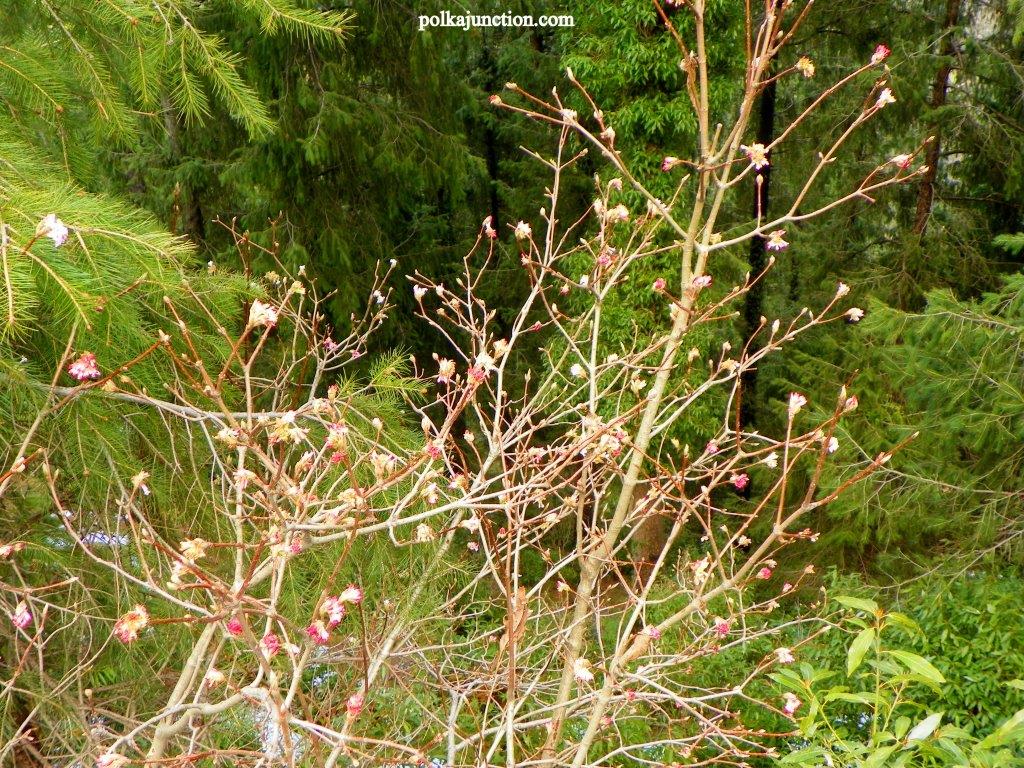 Still, the charm and the enchanting effects of this once colonial town is undeniable! Do plan a visit and hope my other posts on Dalhousie will come handy in planning your trip 🙂