“O wow, when and where did you find this street art in Hyderabad? In all these years, I have never seen this Superwoman”, wondered my friend after I posted the below street art on my Instagram feed. I chuckled a bit and told her it was right in front of the two-wheeler parking slot of the eatery, where we both had gone out for lunch! She gaped at me in astonishment.

Street Art in the twin cities of Secunderabad and Hyderabad

On my recent trip to Hyderabad, I could witness a drastic change in the infrastructure of this erstwhile capital of Andhra Pradesh. With metro projects picking pace and loads of real-estate projects booming, the greenery which was nature’s art in this urban landscape is long gone. However, I was happy to witness a spike in Street Art all across the twin cities of Secunderabad and Hyderabad of the present Telangana. Thus, street art in Hyderabad seems to compensate for the loss of colour and vibrancy that once dominated the city’s landscape.

The beauty of street art lies in the accessibility of art to the public. It is like a Rajnikanth movie that caters to the masses and grabs the attention of the classy too. On this note, here is a Kabali art clicked at the Hyderabad airport… 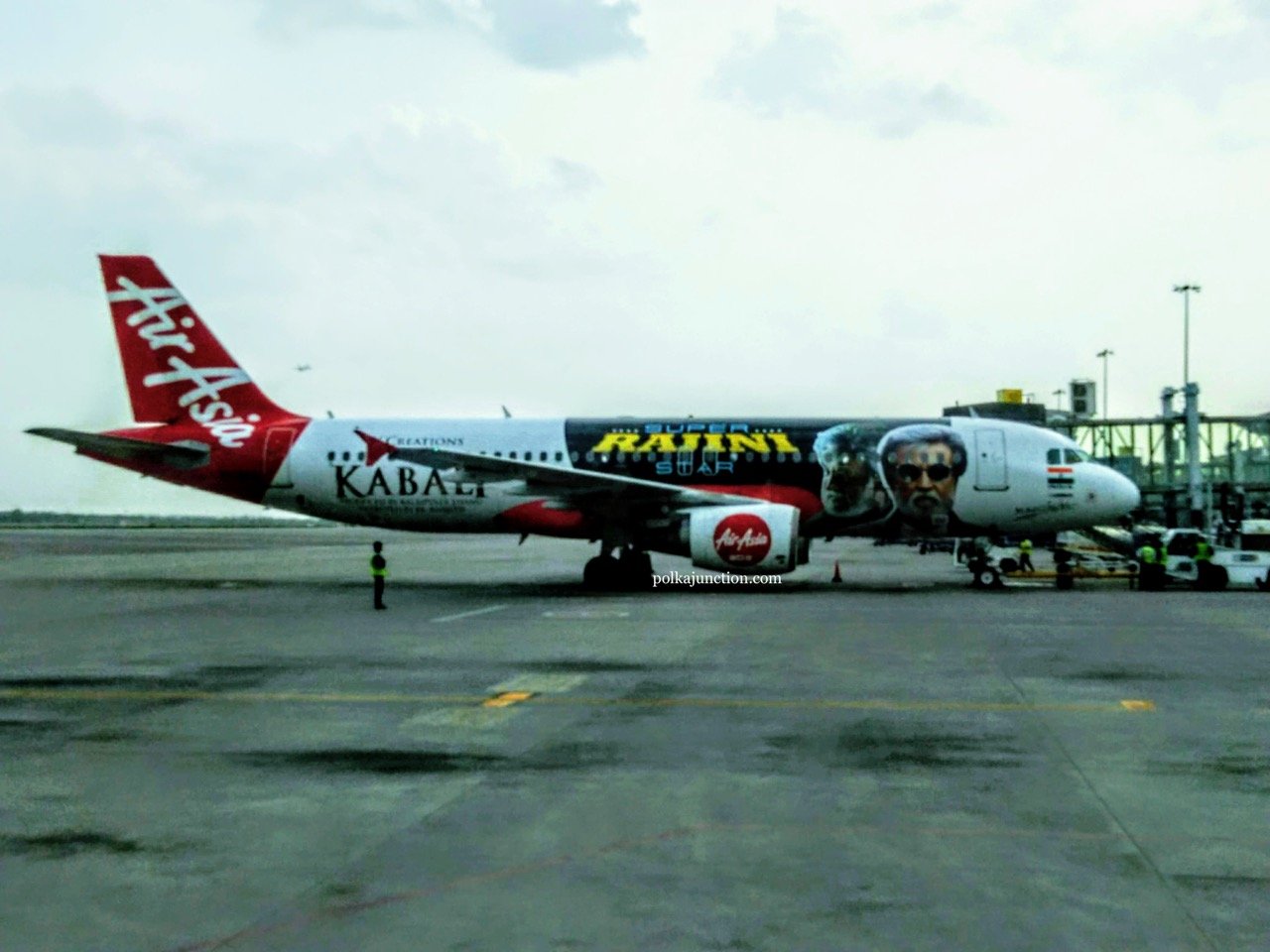 Hyderabad holds a special place in my heart as it embodies the best of the old and modern charm and offers a very cosmopolitan lifestyle. Also, Hyderabad has my muse not because it has contributed a Very Very Special Laxman to the world of cricket, neither because it has contributed a Sania Mirza to World Tennis, nor because it has introduced a Waheeda Rehman to Bollywood but because I have been brought up in Hyderabad…okay..okay,…I can see you rolling your eyes. So, let me stop bragging and allow you to enjoy this photo guide of finding street art in the twin cities of Secunderabad and Hyderabad.

Come with me on a virtual tour as I discover the various graffiti, traditional art and murals that adorn this urban space!

The best thing about street art in the twin cities of Secunderabad and Hyderabad is that it not just reflects abstract modern art on public canvas but embeds with ease the elements of traditional art forms too.

Along the Necklace Road

If you are new to Hyderabad or a tourist or a born-Hyderabadi who is just interested in exploring art and street art, then, head onto the famous Necklace road that adorns the very famous Hussain Sagar Lake, also popularly called Tank Bund. The Necklace road has got amusement parks, eateries at Eat Street, well-manicured lawns and of course, graffiti and wall-art!

Well, this stretch was developed even before the state of Andhra Pradesh was divided into two, for political gains. Now, it is home to some thought-provoking contemporary street art that is open for public consumption. This art series is an extension of Maqtha Art District.

These are street art with strong social messages or depict the prevailing societal mindset that ought to change. I particularly loved this Super-woman who shows that every woman irrespective of her race, class and religion is a Super-Woman without a cape!

I strongly feel, ‘The beauty of Street Art lies in the freedom to perceive, according to the sensibilities and sensitivities of the beholder. And its only limit is his or her imagination’. 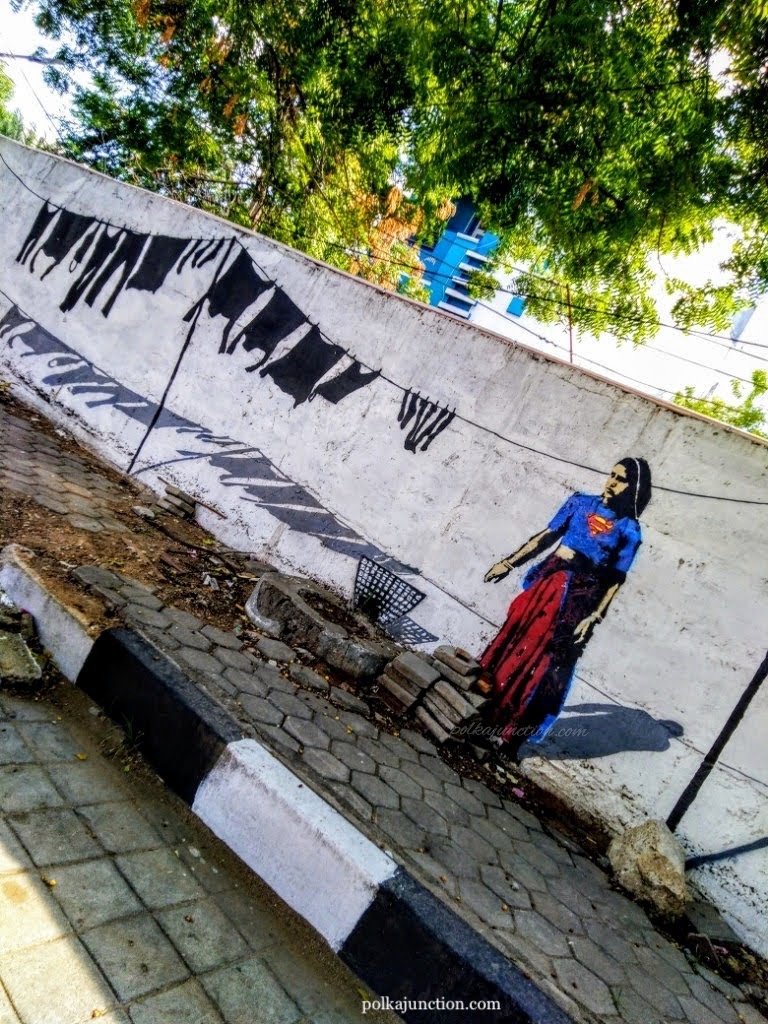 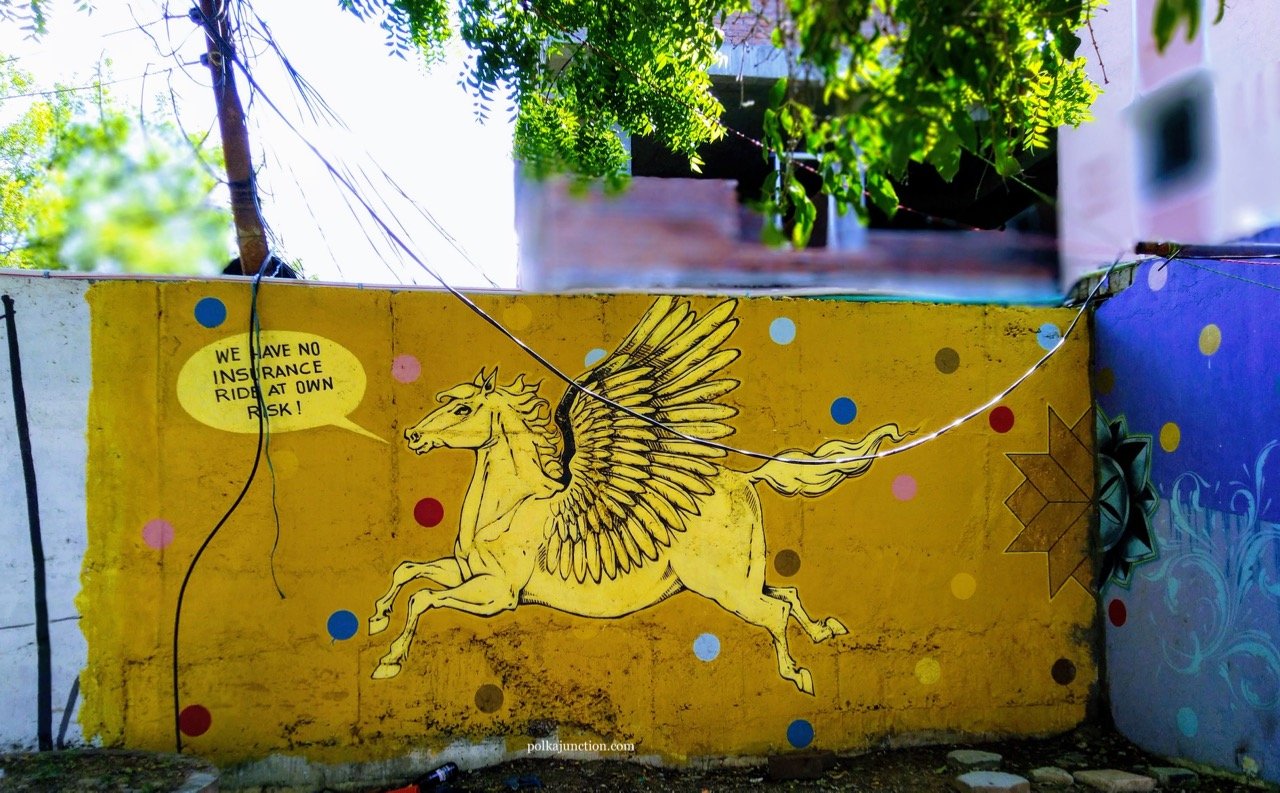 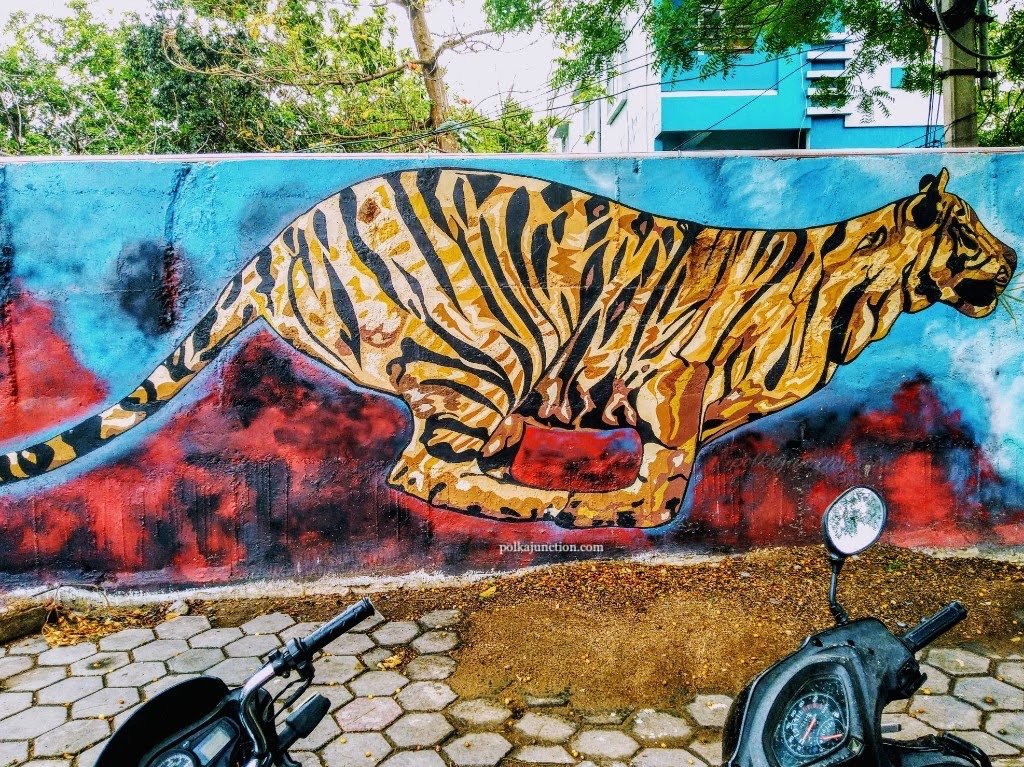 I see the below street art as a depiction of gender discrimination. What is your perspective on this piece of art? 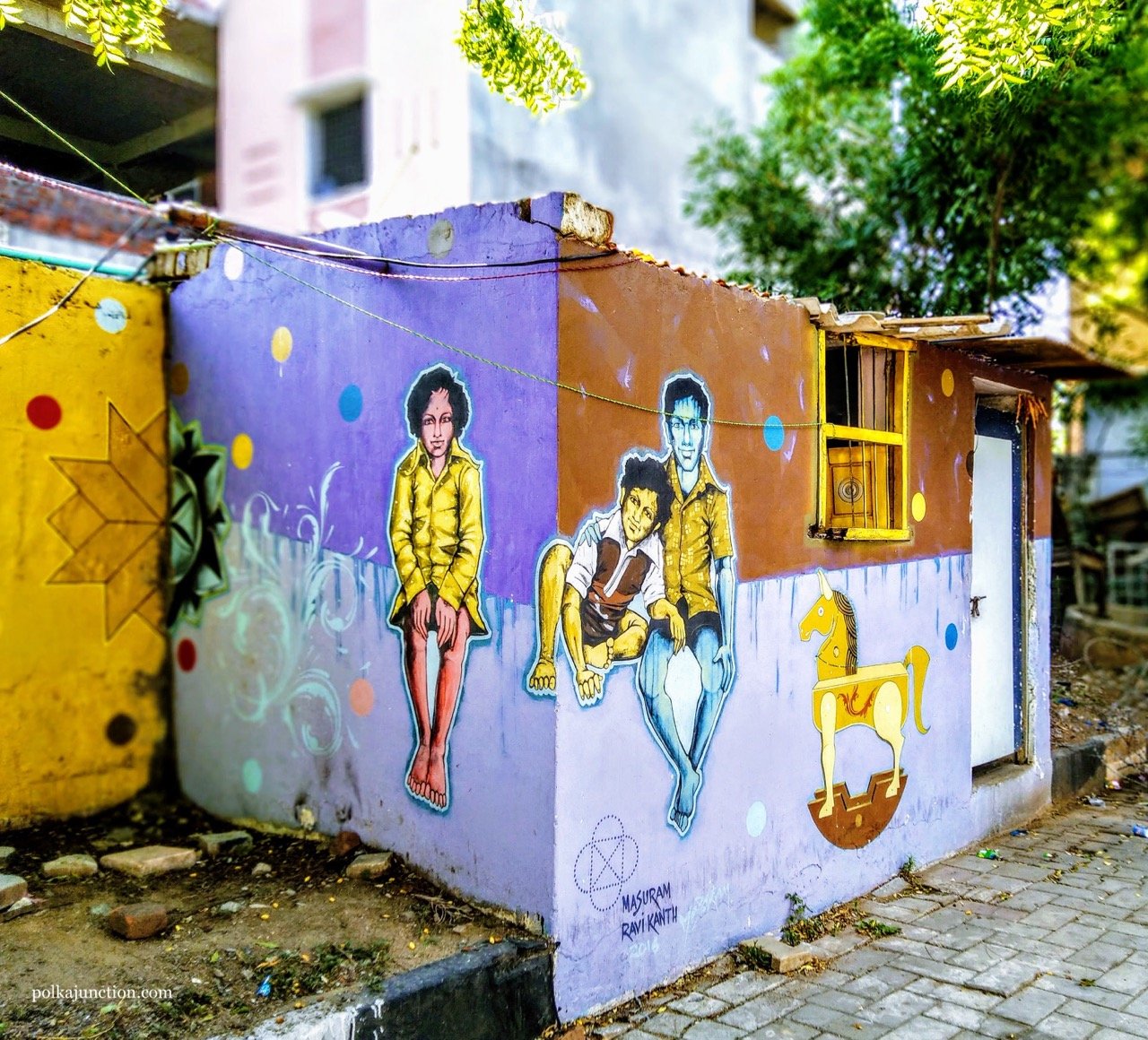 Across the Maqtha Art District

The St+art foundation has done a beautiful job of transforming this colony into an art district. However, when I visited the Maqtha colony beside the Idgah last month, I was not very happy with the cleanliness of that area. Could not cover beyond a couple of streets. So had to cut short my exploration.

However, you may want to read about the murals at Maqtha art district in a write-up on Atlas Obscura, for which I have contributed my bit. 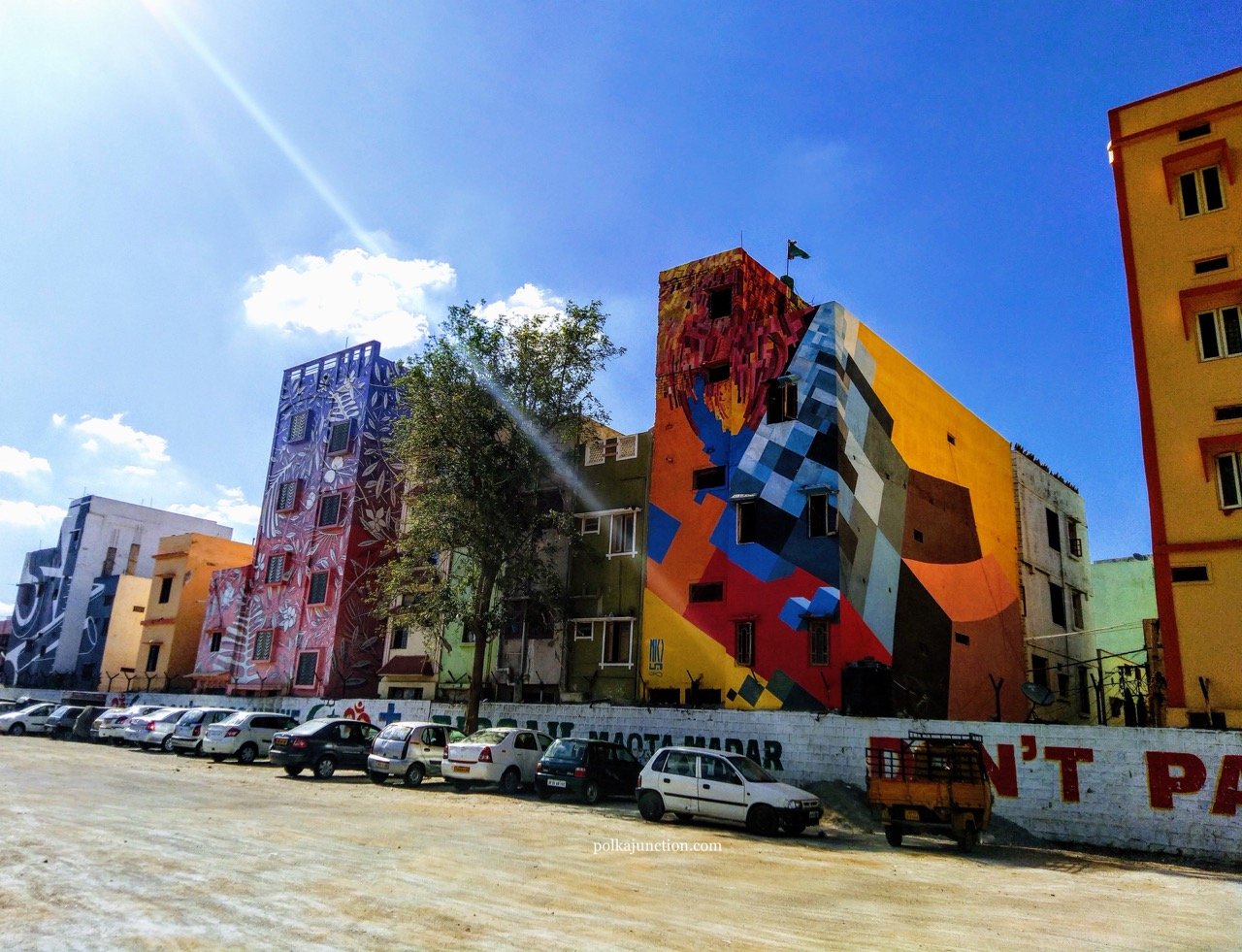 A display of handcrafted items along the road-side is street art too for me, and, thus, the inclusion of their art along with the murals and graffitis in this street art series is for my gratification. As I type this, the fluffy clouds make me wonder about the creation of sky art that we witness every day!!

On a stroll around the beautiful 83-year-old shopping arcade of Mozamjahi Market in Hyderabad, one can find earthen pots and fruits symmetrically assorted and displayed. You can also find potters painting their earthenwares with loads of love and dedication.

Finding street art in Gachibowli as well as on the walls across the State Assembly is quite possible, however, due to heavy traffic, I could not stop my bike and click a few captures. 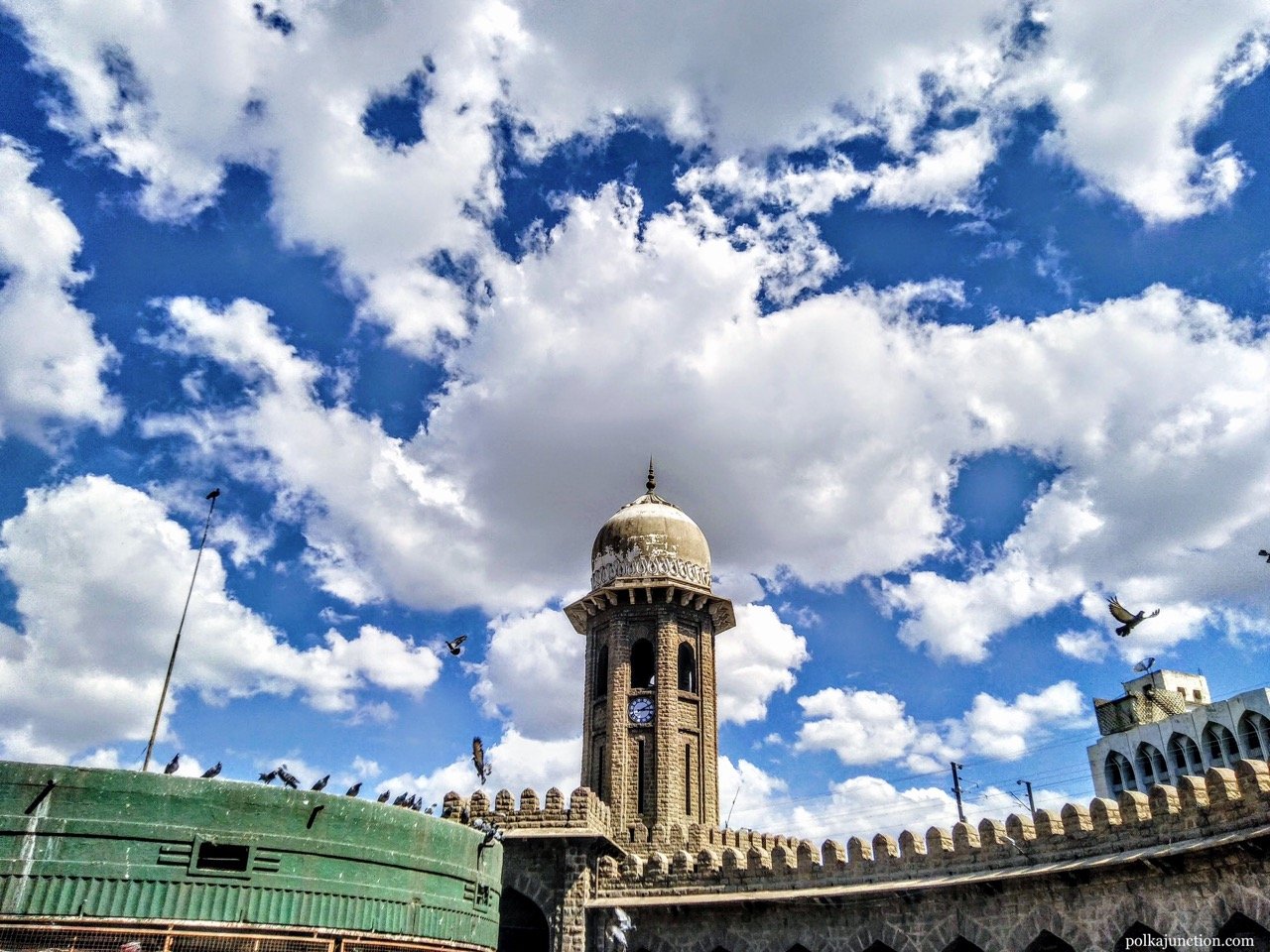 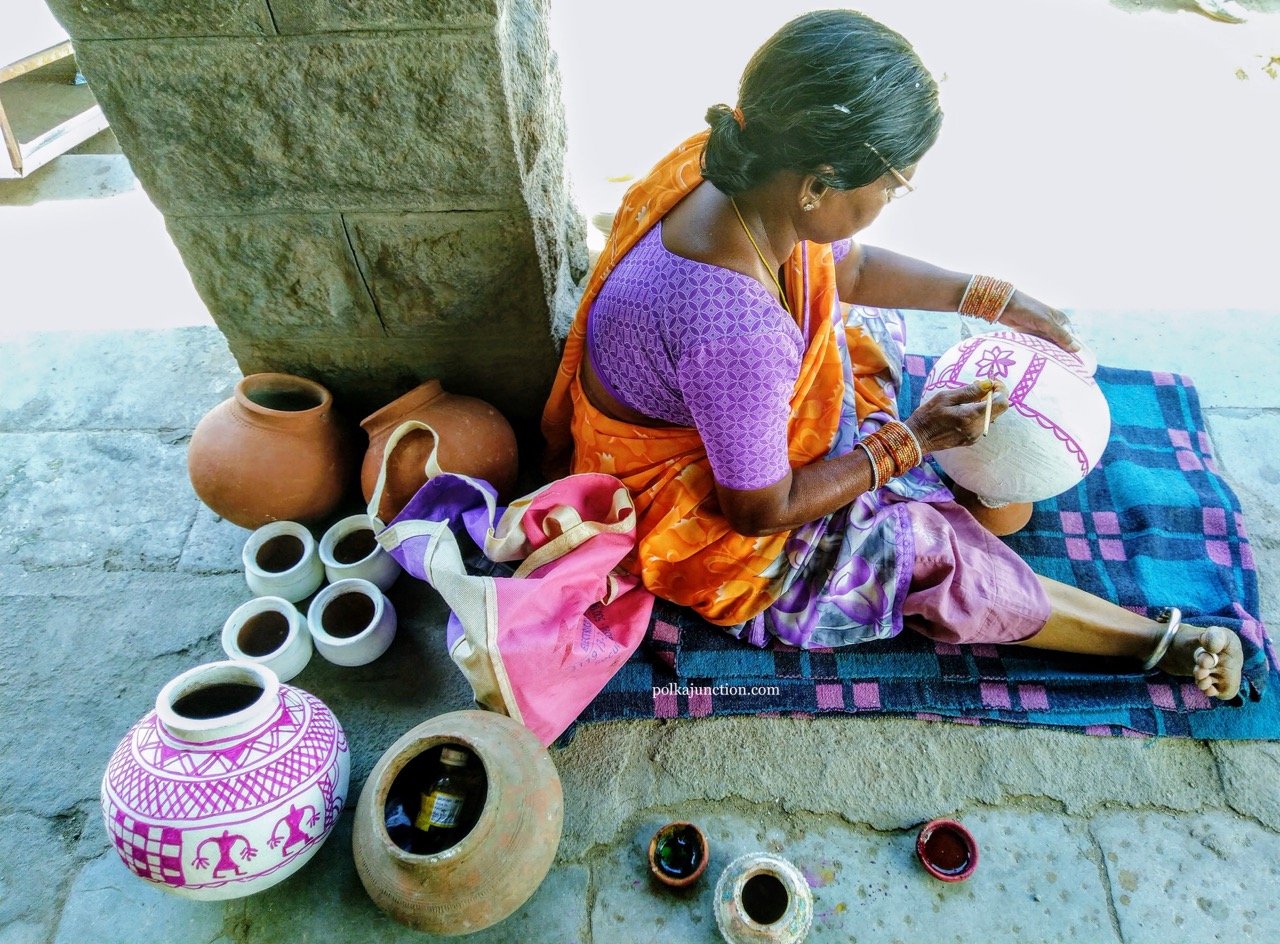 With the development of the Hyderabad metro, there is more concrete than before. But thanks to an initiative, the pillars that hold the metro tracks have been sensibly adorned with traditional art. Street art in Secunderabad is in contrast to the street art that beautifies its twin – Hyderabad. The metro pillars in and around Sangeet Theatre and St.Ann’s School have been embellished with Cheriyal paintings.

What are Cheriyal paintings?

However, I feel that Cheriyal paintings have their own ethos with themes being earthy and not mystical! They are rooted in everyday traditions, happenings and in the beauty of the presumably ‘unfanciful professions’ in the ‘minds of the modern world’.

For example, the below painting depicts an art form called ‘Haridasu’ which is an outcome of the Bhakti movement in India. Usually, these artists dress in a unique colourful attire with an ‘akshaya patra’ ( a vessel for collection of grains/cereals) on the head, a ‘tambura’, and ‘chidatalu’ (cymbals)  singing songs of praise of Gods and walk along various streets.

They do not voluntarily seek alms from every home instead people themselves come out on hearing the songs, during the festive season of Sankranthi. This beautiful tradition was on a decline in the last decade though it is seeing a revival in these couple of years, thanks to today’s youth. These art forms should not be just considered as a mere symbol of our culture and tradition but should be preserved and protected to pass onto the next generation. Else, we would be just celebrating every festival with a cupcake and a Whatsapp message! 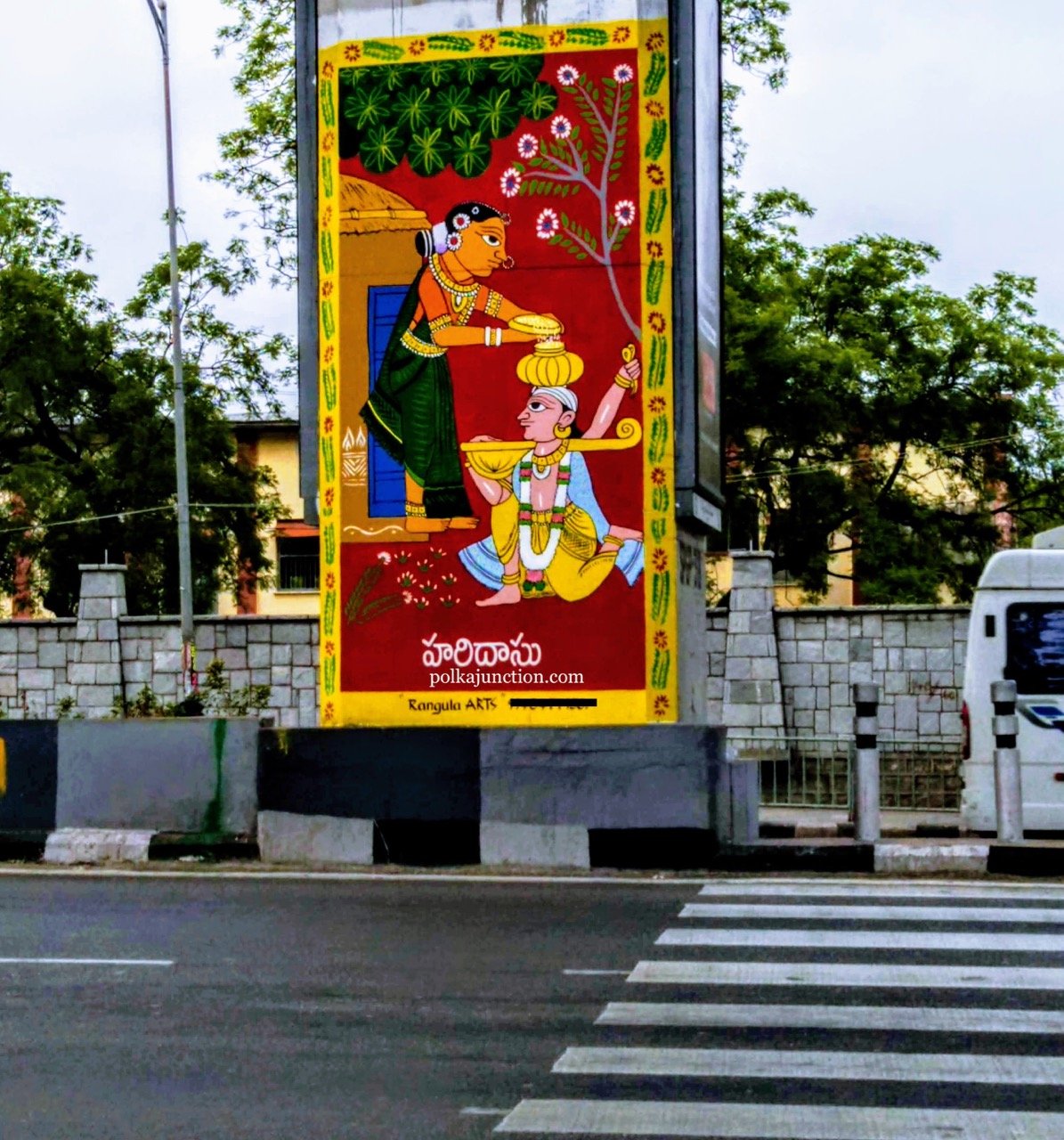 The below mural painting was such a treat when I discovered it. I stopped my bike and kinda stared at every expression depicted by the strokes – the mutual love of the cowherd and cows that have been beautifully manifested on this metro pillar. There are no celestial beings involved in this particular painting and still, it looks divine! 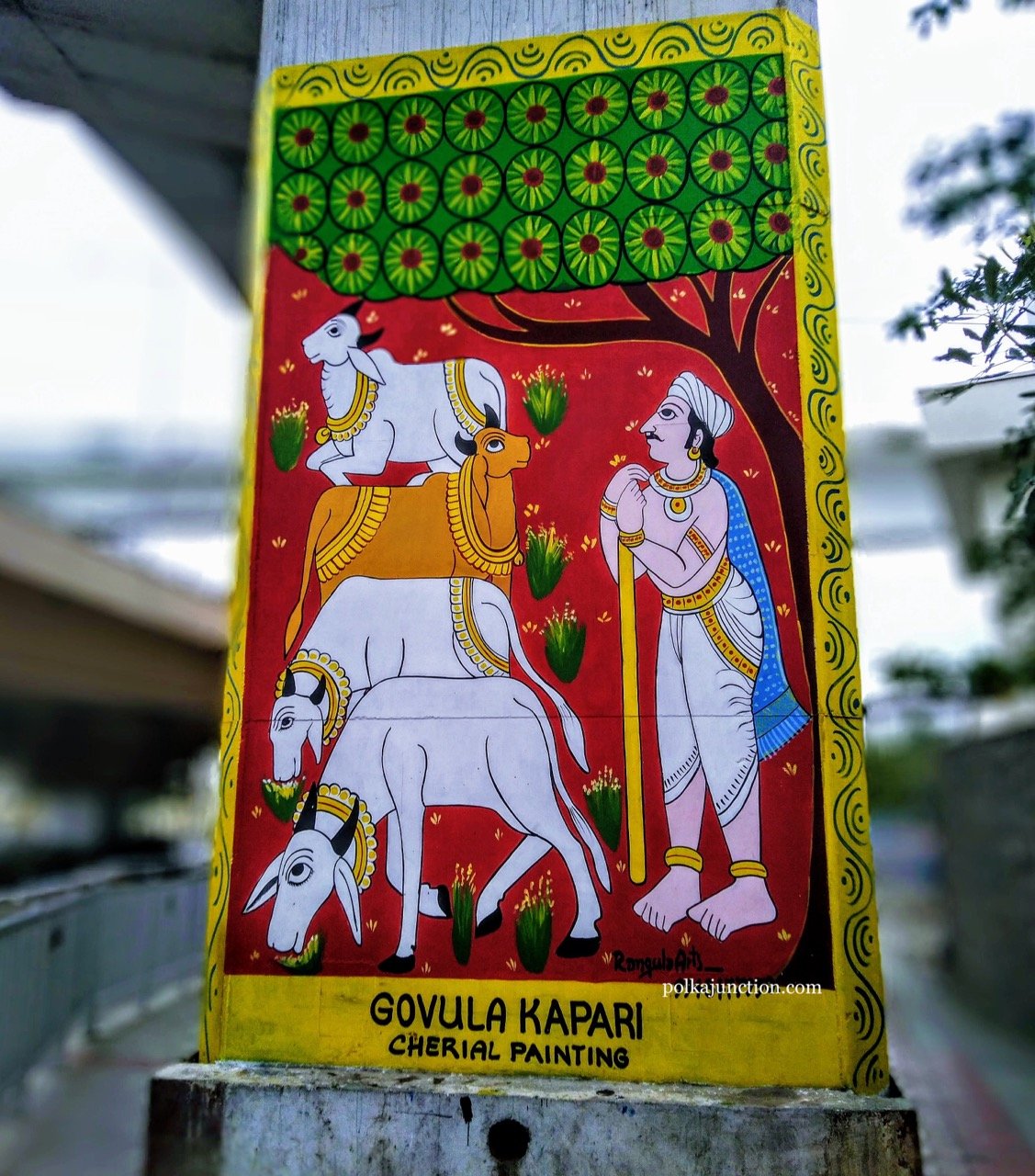 I was excited to see the miniature scroll painting getting a bigger canvas through the street art in Secunderabad.

A newly constructed underpass near the fag end of the AOC centre, adjoining Safilguda railway station is home to some vibrant paintings on its walls. From exhibiting the historical monuments of Hyderabad for which the city is famous for to depicting the changing times across the rural and urban diaspora, this series of art oozes with creativity and nuances of rural living.

It particularly infuses life into elegant and simple old ways of living and dressing! Makes me wonder, why, in the quest for modernity, should we Indians lose our unique dressing sense and ape the western world? Does dressing in an Indian attire lead to regressiveness? I don’t think so…Then, why do some of us, both women and men get stares when in public and social gatherings, and are labelled as ‘uneducated and regressive’ when we dress in a saree or a veshti! 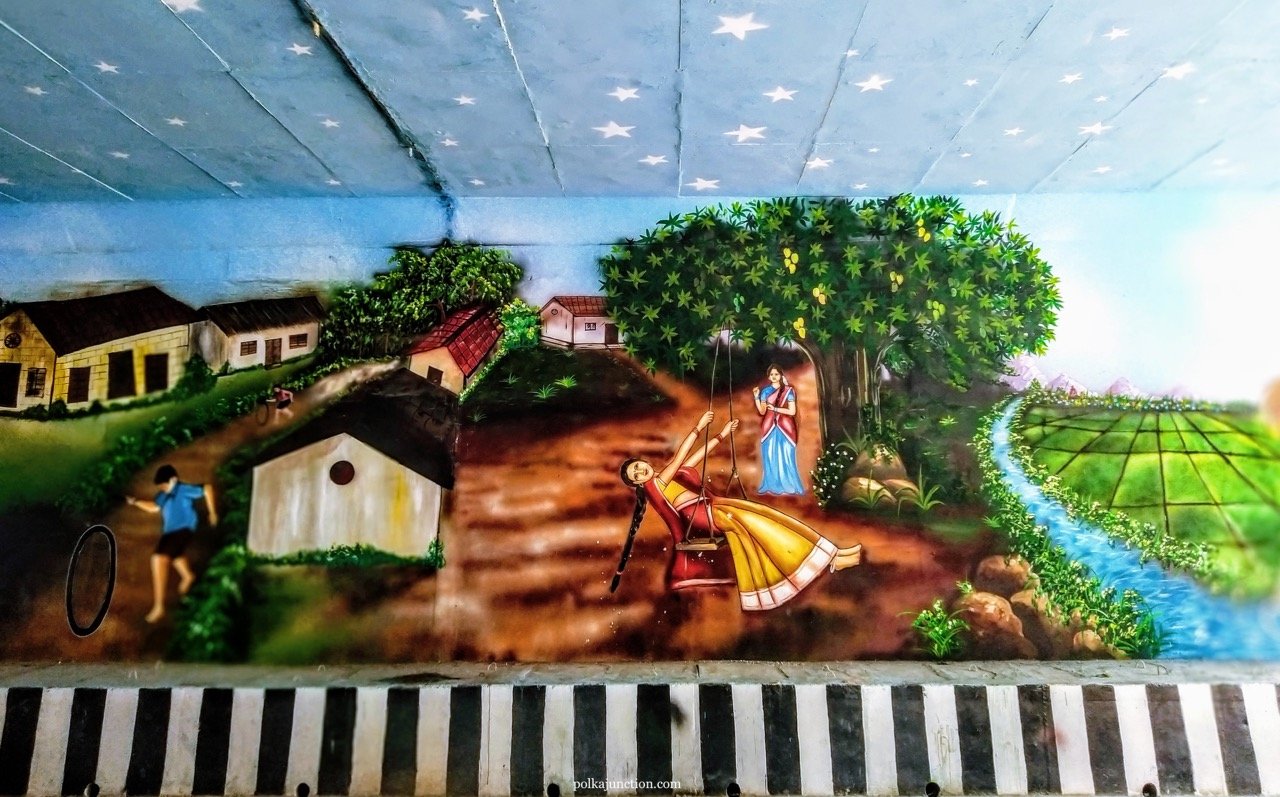 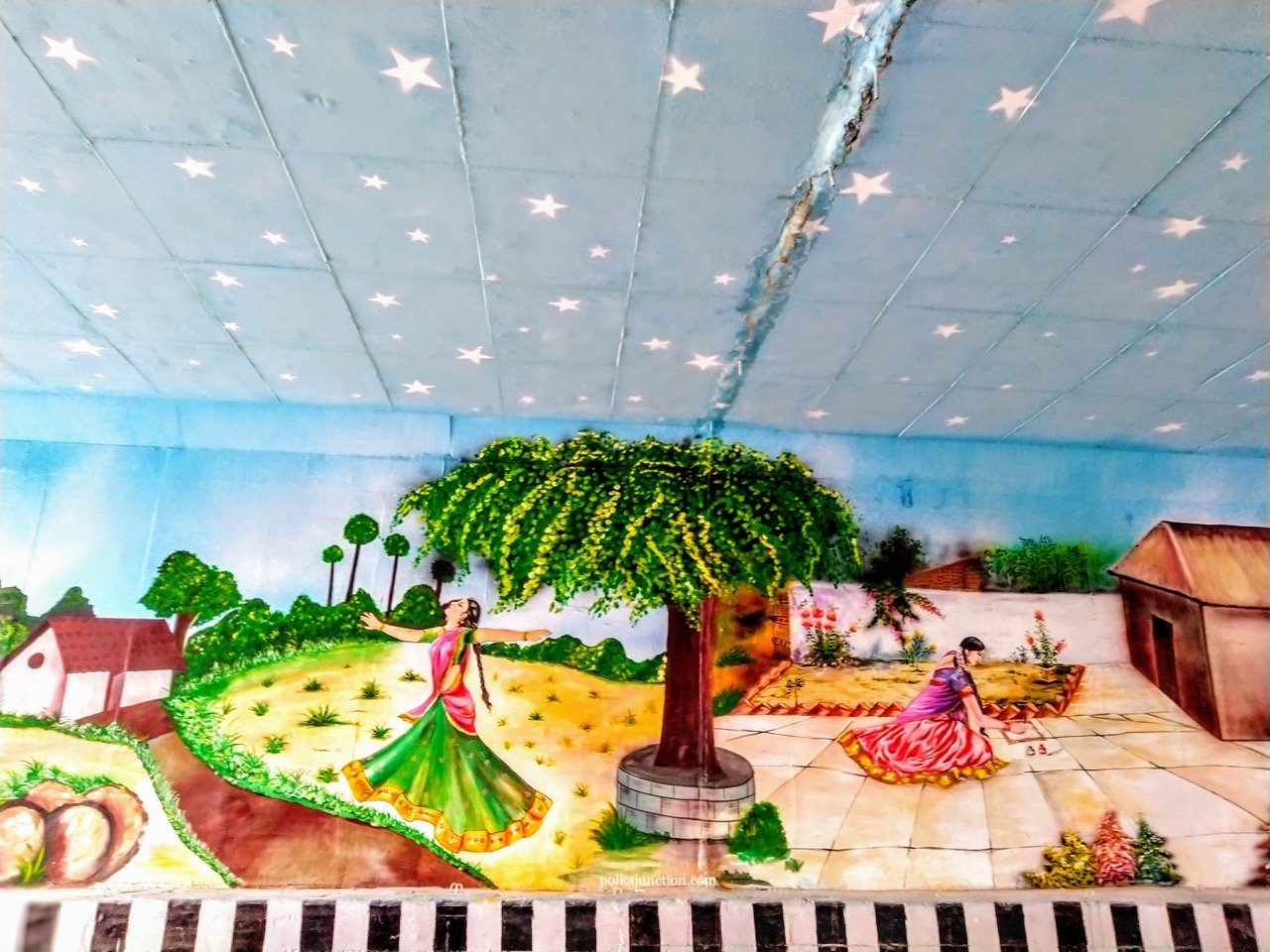 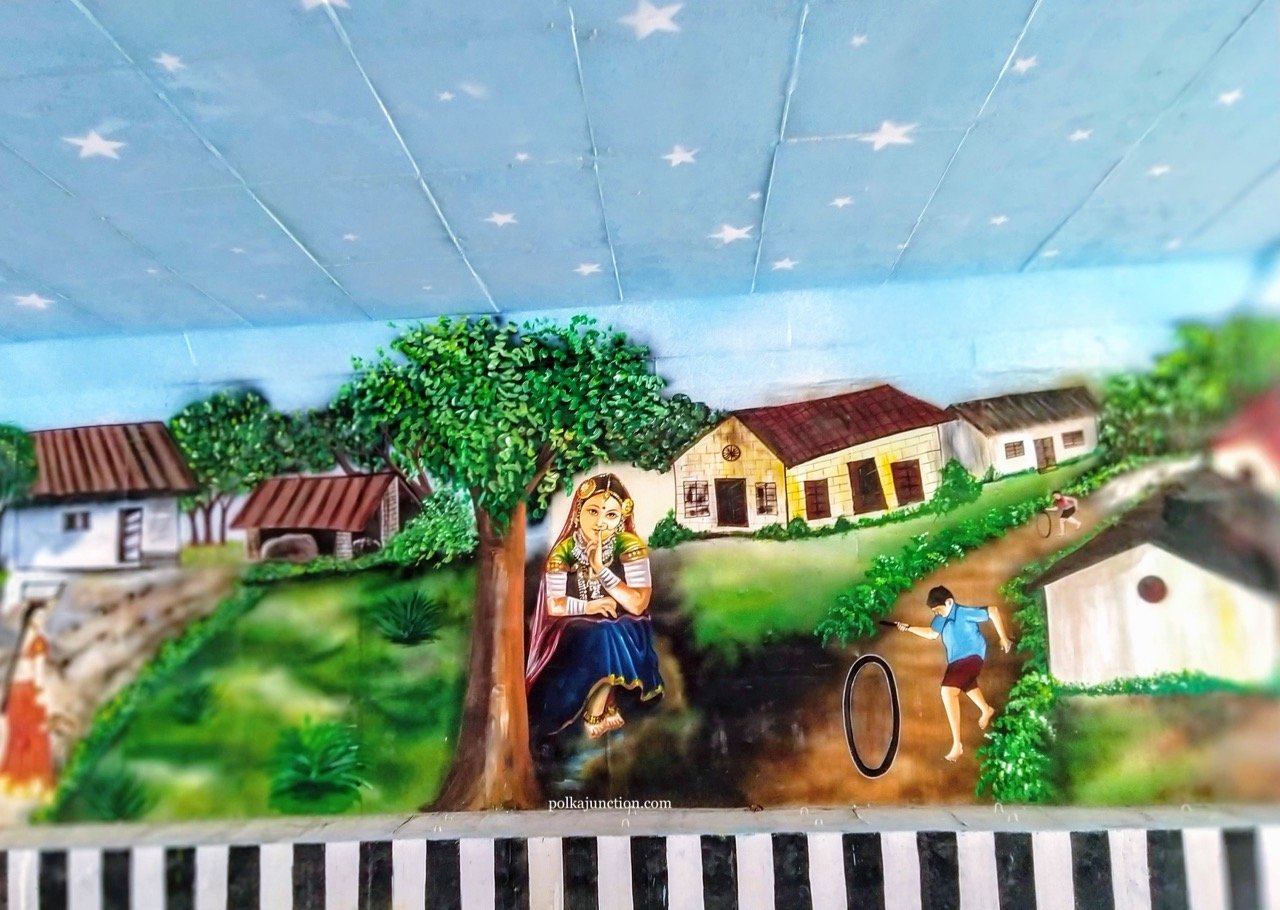 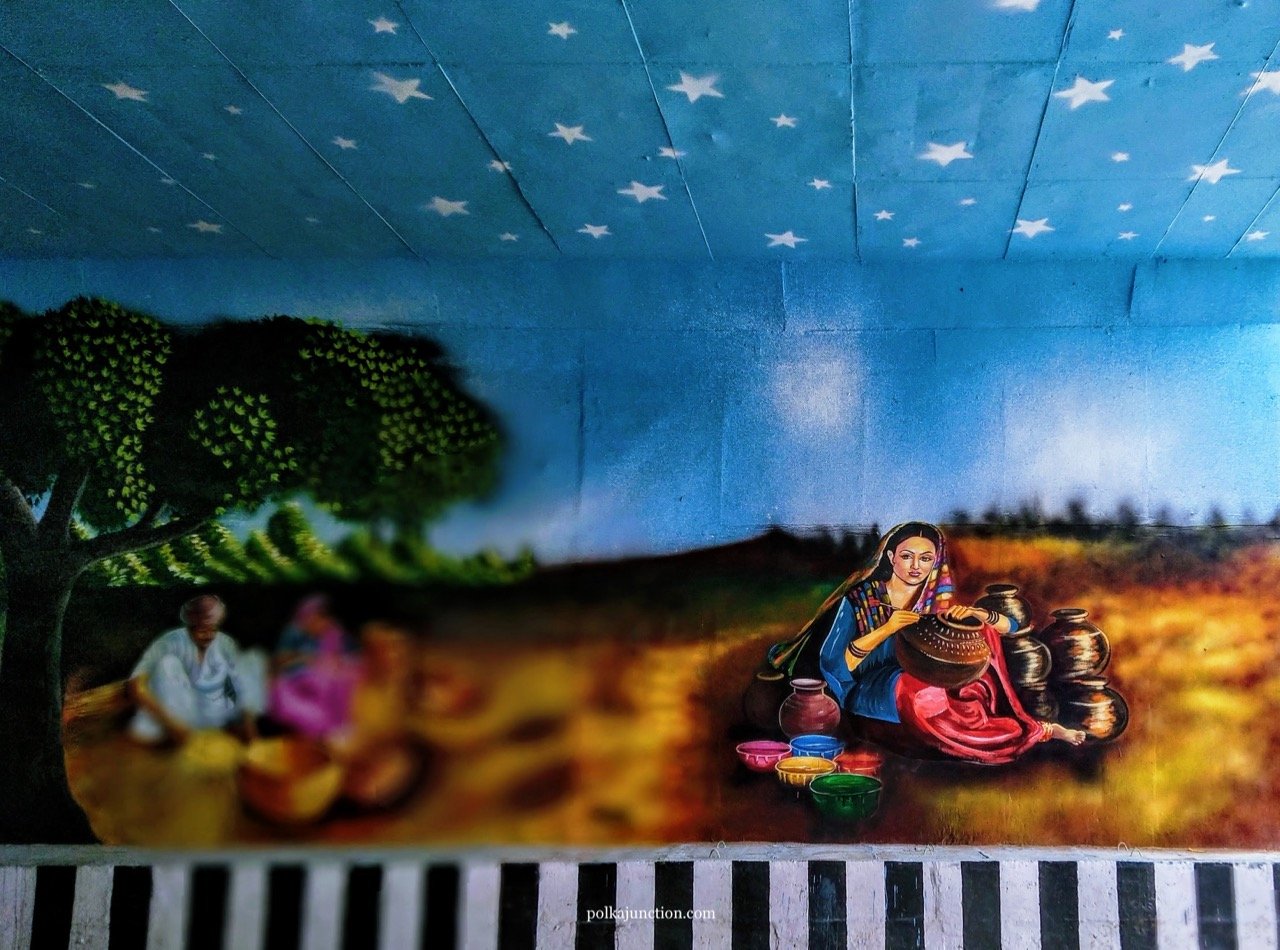 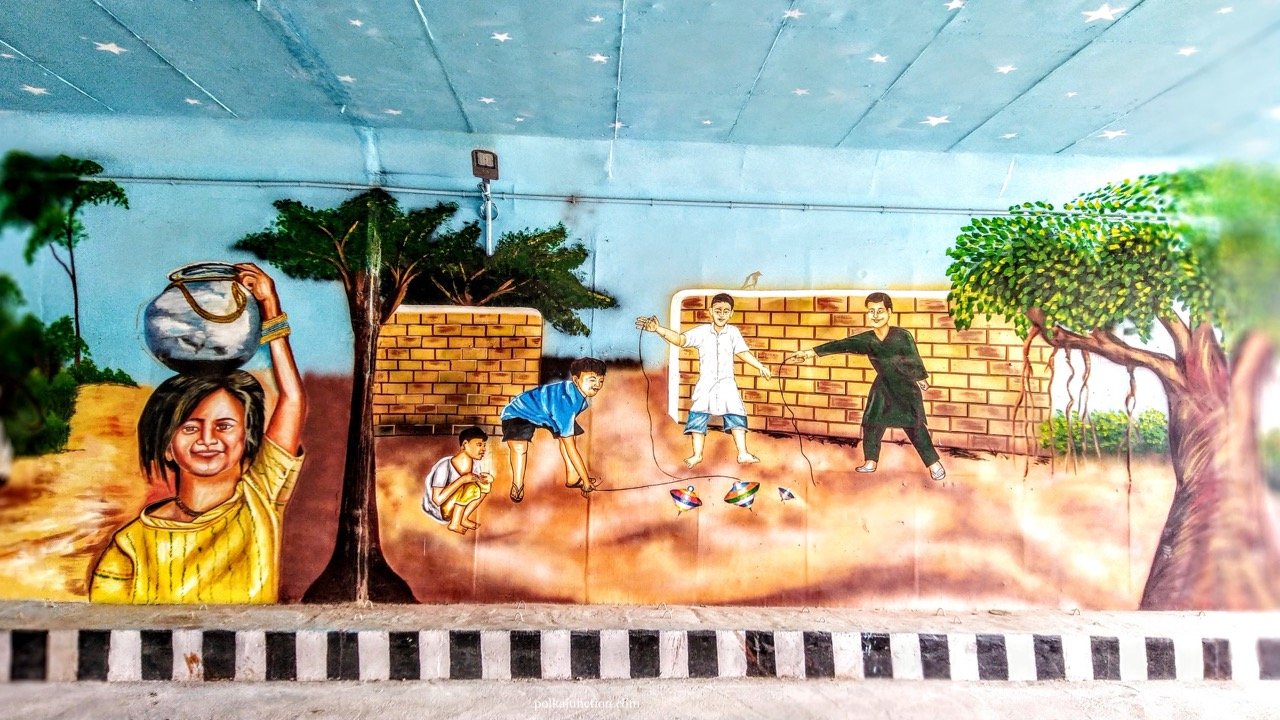 This Street art series along the walls of the underpass celebrates simple joys of living and imparts hidden messages against gender discrimination and so on.

Hope you liked this photo guide on finding street art in Secunderabad and Hyderabad. Also, I wish you get to explore many more places in the twin cities, that offer street art for public consumption. Do visit these places soon, because, street art in any city is transitory, changing with the times and moods of the public. Also, it can fade over time due to exposure to varied weather conditions!

The urban spaces of the twin cities of Secunderabad and Hyderabad are bound to offer many more of such artistic delight(for that matter, every town and city). So, go out, explore these hidden gems tucked away at places where you least expect and surprise yourselves on your discovery 🙂 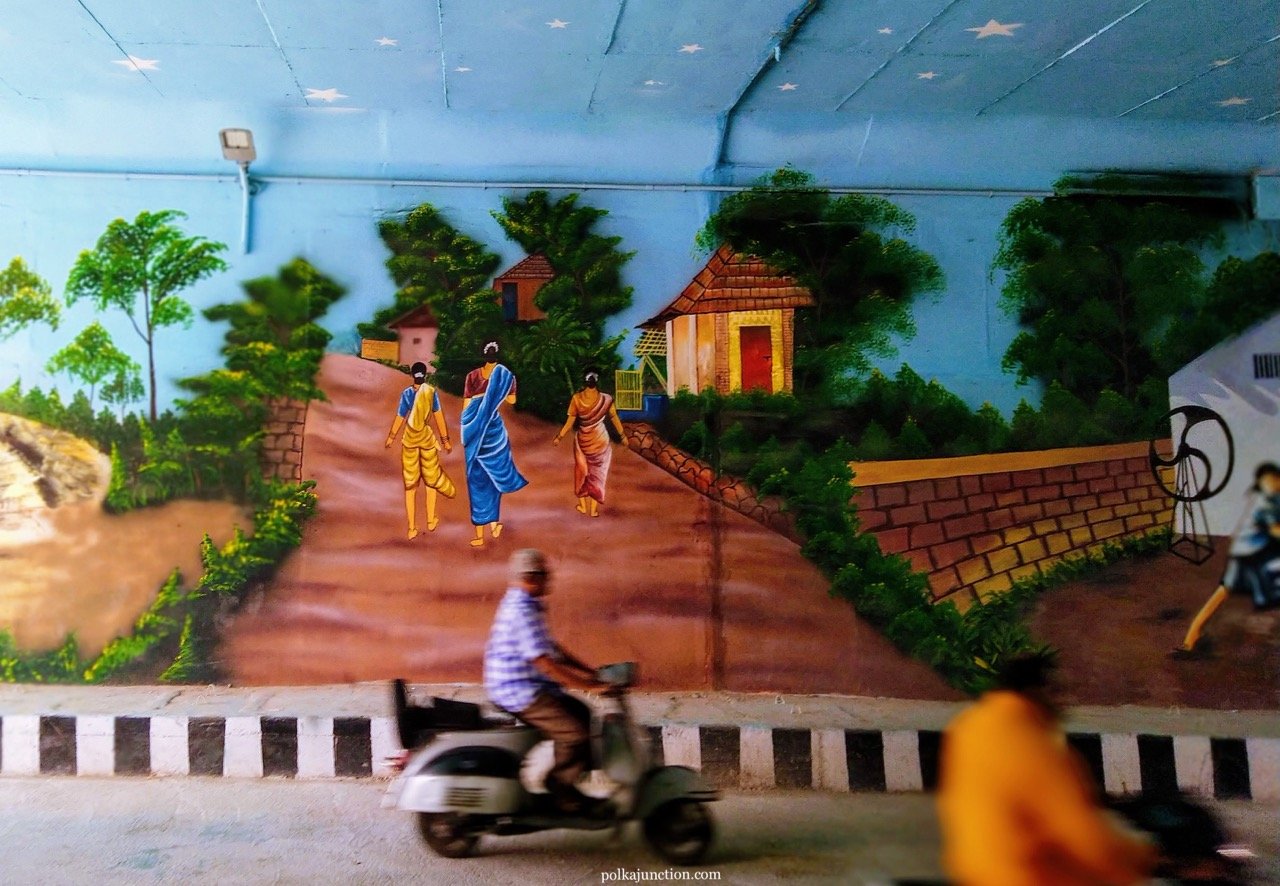 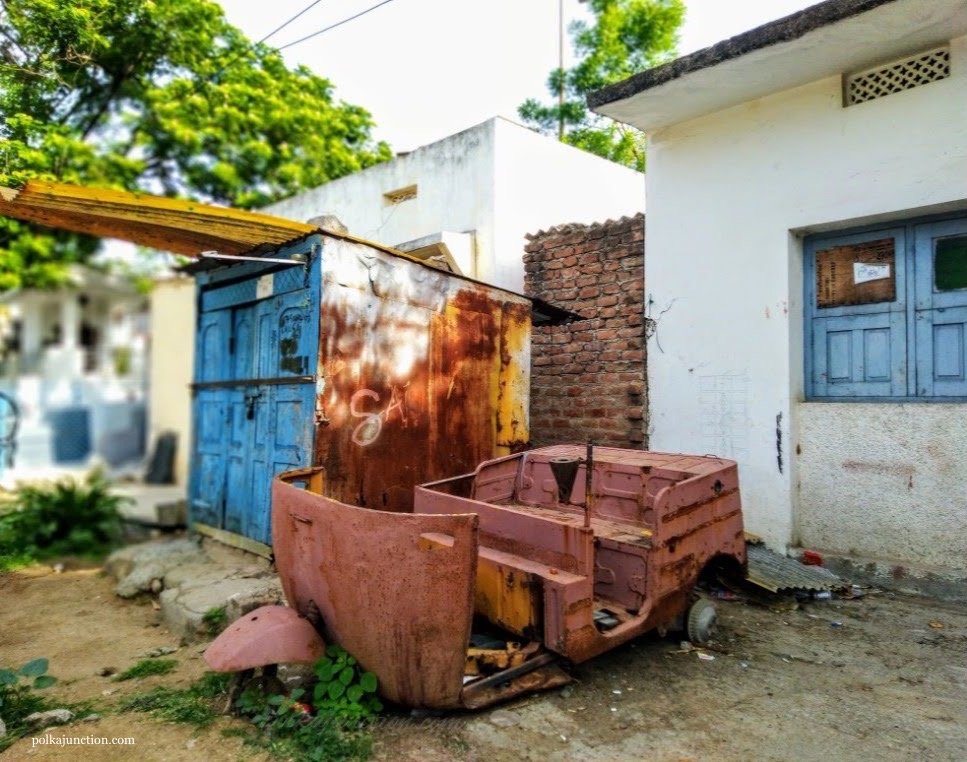 Do leave your feedback in the comments section. 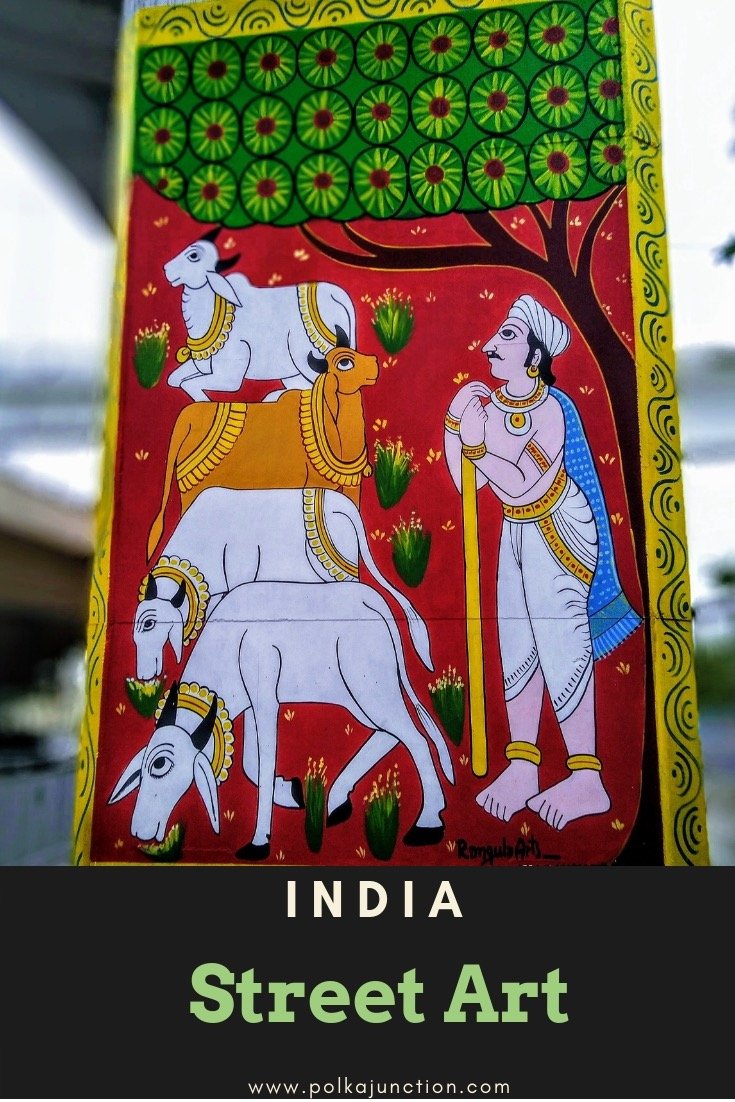 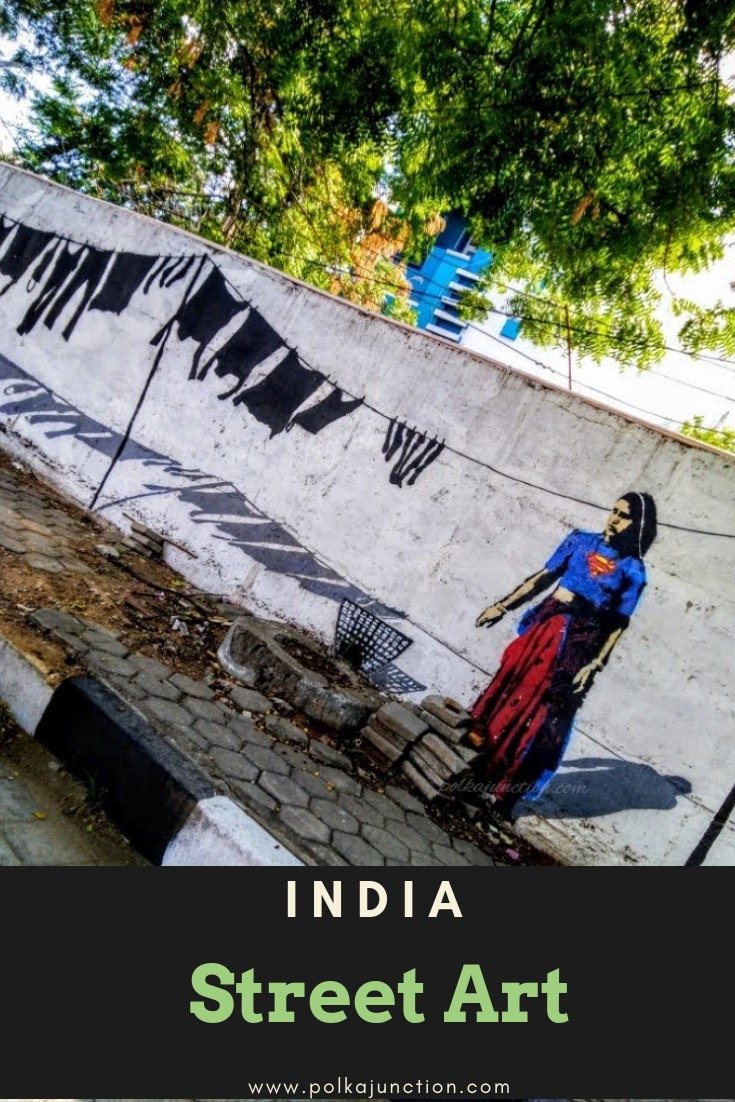 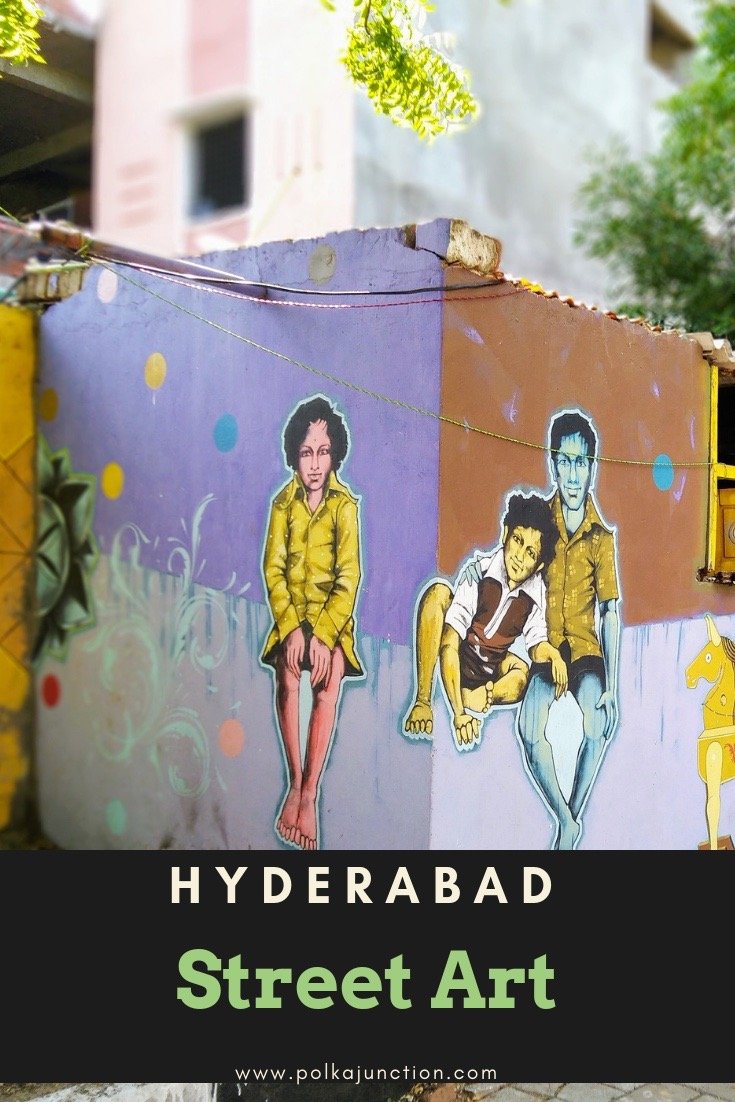 62 thoughts on “A photo guide to finding Street Art in Secunderabad and Hyderabad, Telangana – India”