A weekend getaway from Delhi, driving on the highway to Alwar, flooded with fields of gently swaying yellow mustard and blooming sunflowers on either side, flanked by the lush rolling mountains of the Aravallis….Bliss! And, above all, our destination, Alwar, is a rich repository of Rajput architecture and flamboyance, and a place that is the genesis of ‘Alwar ka Mawa’ or Milk Cake. Interesting, right?

So, come with me as I explore the must-visit places in and around Alwar on a weekend getaway and a road trip from Delhi. And, do have a glimpse of my Alwar sightseeing list, must-buy things, and more! 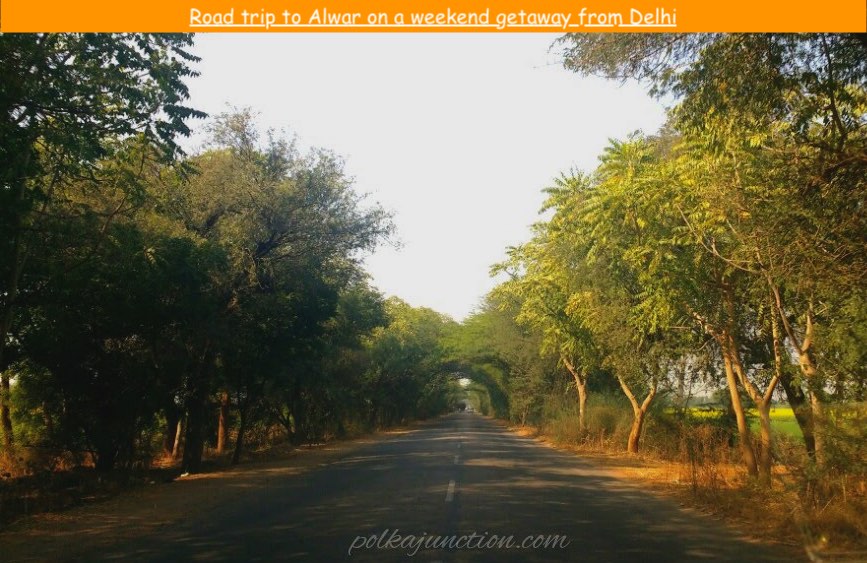 On one of the long weekends, a couple of months back, we decided to embark on another of our road-trips from Delhi. Hitting the highway isn’t new to our family, as most of the time, we indulge in road-trips when transiting from one location to another during our defence postings. The only difference this time around was engaging a reliable cab with a driver to zoom us across the states of Delhi, Haryana, and finally, Rajasthan. This idea to opt for a cab on rental, stuck us when we happened to watch a short video on youtube while searching for must-visit places in and around Alwar on a weekend getaway from Delhi.

Having lived in Rajasthan for over six years, we have extensively traversed overland in this desert state. But, on this trip, the topography of Alwar struck as a pleasant surprise. Cocooned away from the noisy urban landscapes, this ancient region of ‘Mathsya pradesha’ is beleaguered by the Aravallis from all sides. And, the landscape en route is breathtaking with exuberant wild foliage, hairpin bends, and a landscape of Rajasthan that I last experienced in the Pali region. There is definitely a charm associated with road-trips especially when traversing and travelling in India.

On most of the family road-trips, as the husband drives the car, I sit beside with a keen eye on the maps(more recently with Google maps) lest we miss a road or two. For a change, on this weekend getaway to Alwar, we were happy to be the occupants of the back seat and enjoy the landscaped vistas devoid of twitchiness as our driver was well-versed with the routes and alleys of Alwar.

5 must-visit places in and around Alwar

Alwar is located in the oldest region of Rajasthan. This region was known as matsya pradesha aeons ago with its capital at Viratanagari (present-day Viratnagar or Bairat) ruled by the Suryavanshis. Lord Rama is a Suryavanshi!

We could not stay for more than two nights in Alwar, as we had to cover Bhangarh and Abhaneri as well on this trip. We had booked a cab on rental for the weekend and wanted to utilize their services to the fullest on this trip to Alwar, as a weekend getaway from Delhi. Anyways, here are the five must-see places in and around Alwar, an ancient region of Rajasthan that is sure to be worthy of your time and money.

Also, I haven’t included places under the Alwar sightseeing list, that are in dilapidated conditions or ones that have been converted into luxury heritage hotels. No point including them on this budget road-trip weekend getaway!

Boating in the Siliserh lake 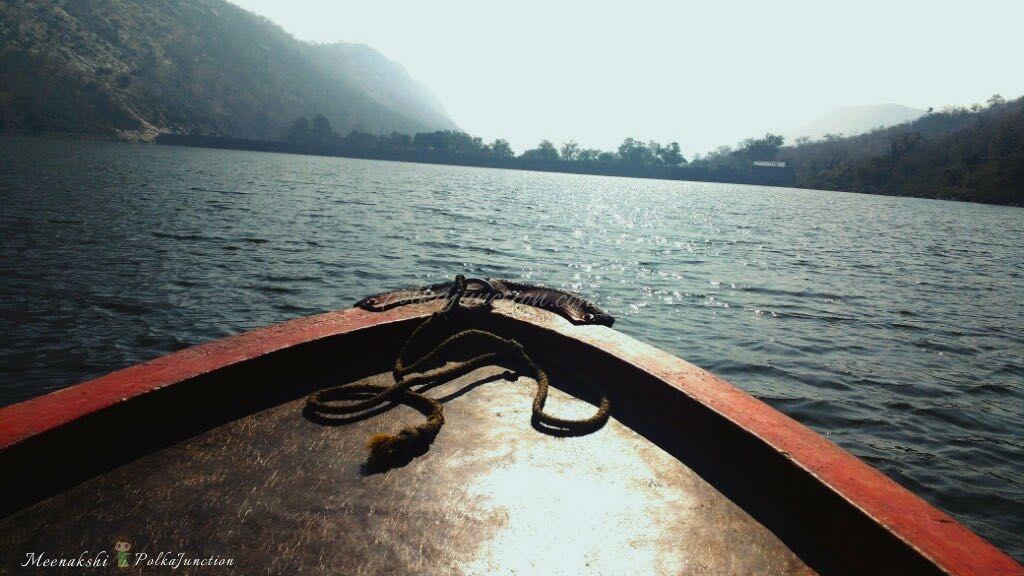 Alwar is a small town and it has just a handful of places to visit. Yet, it has an interesting blend of contemporary and ancient architecture all around the place. Here a few of the best places that could make to the list of ‘Alwar Sightseeing’.

Perched high on the craggy edge of the Aravallis overlooking the city of Alwar is the Bala Quila that has stood the test of times. With a cloud of dust perennially canopying it due to the mining activities that go unchecked nearby, the fort is being resurrected to its old glorious form for the last decade or so. The ongoing process of restoration is at snail’s pace but let this not deter you from hiking or driving to the hilltop that holds the Bala Quila.

Rajasthan Tourism has introduced a safari across this hill which is supposedly an extension of the Sariska Wildlife Sanctuary that is in the vicinity. One has to park the vehicle at the entrance and opt for the open-jeep safari which was around Rs.1200/- (for 6 people) a couple of months back during our visit. The guide who accompanies as the chauffeur of the safari, would mostly double-up as the guide as well. I found this worth the cost. Definitely, do not miss this experience. 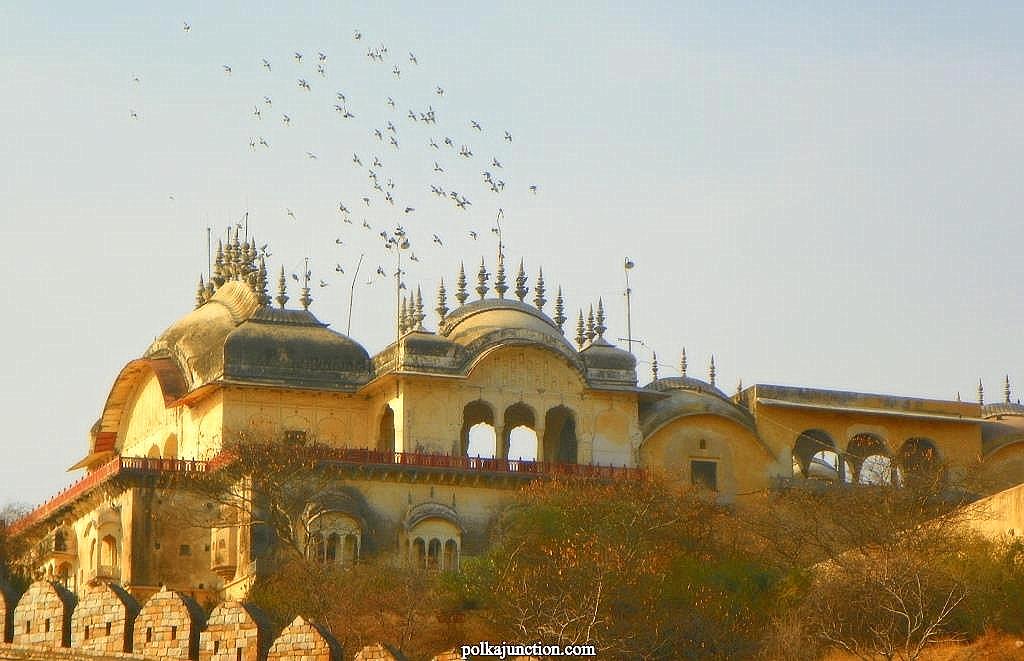 Rajasthan is all about royalty, masculine valour, Rajput war stories, and a patriarchal presence. Though it also is known for its reverence to women in various divine forms, the infamous social practices of child marriages and Sati that once dominated the state cannot be ignored. So, one can understand my surprise when I got to know about a chhatri (memorial) named after a woman in the oldest Rajasthan territory of Alwar.

The Moosi Maharani Ki Chhatri in Alwar was built by Maharaja Vinay Singh (1815-1857)  in memory of his predecessor Maharaja Bakhtawar Singh and the latter’s wife Maharani Moosi, who had committed sati (self-immolation)’.There are interesting legends surrounding Moosi Maharani!

Interestingly, the Moosi Maharani ki Chhatri has been built with an elephant-shaped structure and has a combination of domes that also reflect the Islamic influenced Bengali architecture, red-basement, and intricate carvings and paintings. It is a double-storied red-stone and marble cenotaph. It forms an interesting imaginary triangle with Alwar City Palace and Sagar Lake.

The Sagar Lake beside the Moosi Maharani Ki Chhatri offers a pleasant view of the Alwar city palace, the Bala Quila as well as the adjoining Moosi Maharani ki Chhatri. The scene is an eclectic mix of red, white, pastel shades and the green of the algae of the pond.

This 19th-century waterbody has survived the times and has been somewhat restored. It is believed to have been constructed around the 6th or 7th century and then renovated again by King Vinay Singh when he ordered the construction of the cenotaph of Moosi Maharani Ki Chhatri and the City Palace around 1815 CE.

With its red-sandstone chattris on its bank protruding horizontally, the reflections of these 12 architectural delights light up the otherwise greenish waters of it while the Sagar stands majestically as a testimony to the changing times.

We avoided visiting the Alwar City Palace as it is ill-maintained and most of it is occupied by the judiciary and government offices. There was no point in wasting time on this trip to Alwar on a weekend getaway for sure! Instead, we headed towards the Bhangarh Fort.

Siliserh Lake and Palace: one of the must-visit places near Alwar

Siliserh Lake is one of the most beautiful lakes on the outskirts of Alwar. It indeed is an oasis amidst the arid region of Alwar surrounded by the Aravallis.To learn that it is a man-made lake built in 1845 by Maharaja Vinay Singh to cater to the needs of the people of Alwar was quite a revelation.

Just adjacent to the lake is a beautiful Lake Palace that he got built for his wife Shila that served as the summer palace and hunting lodge of the royals. It has now been converted into an RTDC run hotel. Though the rooms are well-appointed, the surroundings are littered with garbage. And, we found the restaurant a bit expensive too.

The most endearing thing to do at the Siliserh lake is to indulge in some boating. There are motorboats that are operational and a ride in the boat offers a mesmerizing view of the palace facade, as well as the Siliserh lake, and helps in appreciating the thought which went into building the lake and the palace.

The Siliserh palace looks splendid from afar with its presence on the edge of the craggy Aravallis. We were informed by the boatsmen that certain areas of Siliserh lake were out of bounds for boating due to the presence of crocodiles!

However, it has got beautiful temples built in nagara style architecture.

You may read more about the Bhangarh Fort on my blog

Sariska wildlife sanctuary apart from being a haven for wild-animals and bird-spotting also houses impressive temples belonging to the 11th century. Unfortunately, we could not visit the place.

We gave a miss to Sariska as it wasn’t the right season to spot the animals. However, we hope to engage an inexpensive full day taxi in the coming monsoon season, and visit the place on another of our routine getaways from Delhi.

But, Sariska is one of the must-visit places in and around Alwar for sure. With a hassle-free billing policy and a responsive customer helpline, Savaari has truly gained our trust. And, who wouldn’t want to sit back and enjoy the vistas of the Aravallis during the monsoons, while knowing that we are in safe hands! 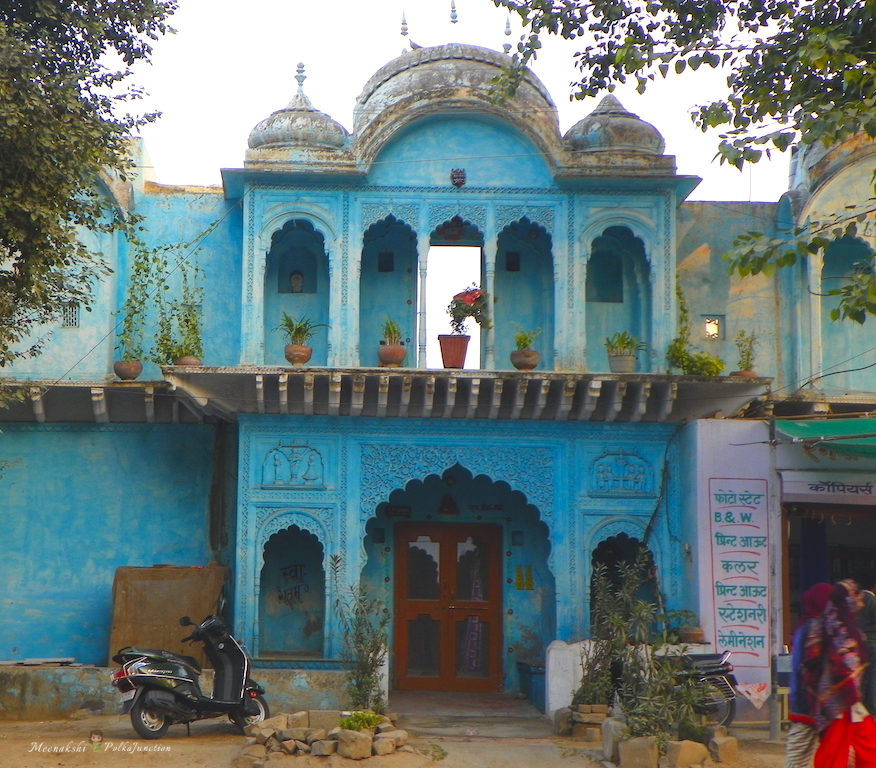 What to buy in Alwar

Pamper your taste-buds with the indigenous ‘Milk Cake'(Kalakand) for which Alwar is quite famous. You may drive towards the market area and buy some from Baba Thakur Das & Sons ( Address: Ganpati Tower, Company, Bagh Road, Nagli Circle). This is supposedly the original shop that popularized the dessert.

Best place to stay in Alwar

We opted for the AC rooms at RTDC run Hotel Meena in Alwar, to stay on this trip, and, I found the RTDC property budget-friendly with courteous staff, serving freshly prepared food and with ample parking space. There are a couple of other high-end boutique hotels too that one could choose.

How to reach Alwar

By Taxi or Cab: We zeroed upon a budget-friendly Savaari outstation cab on this trip to Alwar on a weekend getaway Delhi. With the must-visit places in and around Alwar to be covered and lack of public transport, I would suggest a rental cab as an ideal option if not a self-drive.

By Train: There are also trains that run from Delhi to Alwar. Do check the IRCTC site (Indian Railway Catering and Tourism Corporation ) for further details.

Disclaimer: This trip to Alwar, either partly or fully was not sponsored by any agency or brand mentioned in this blog post. I have just shared information about various must-visit places in and around Alwar and services, that I feel would benefit the readers. 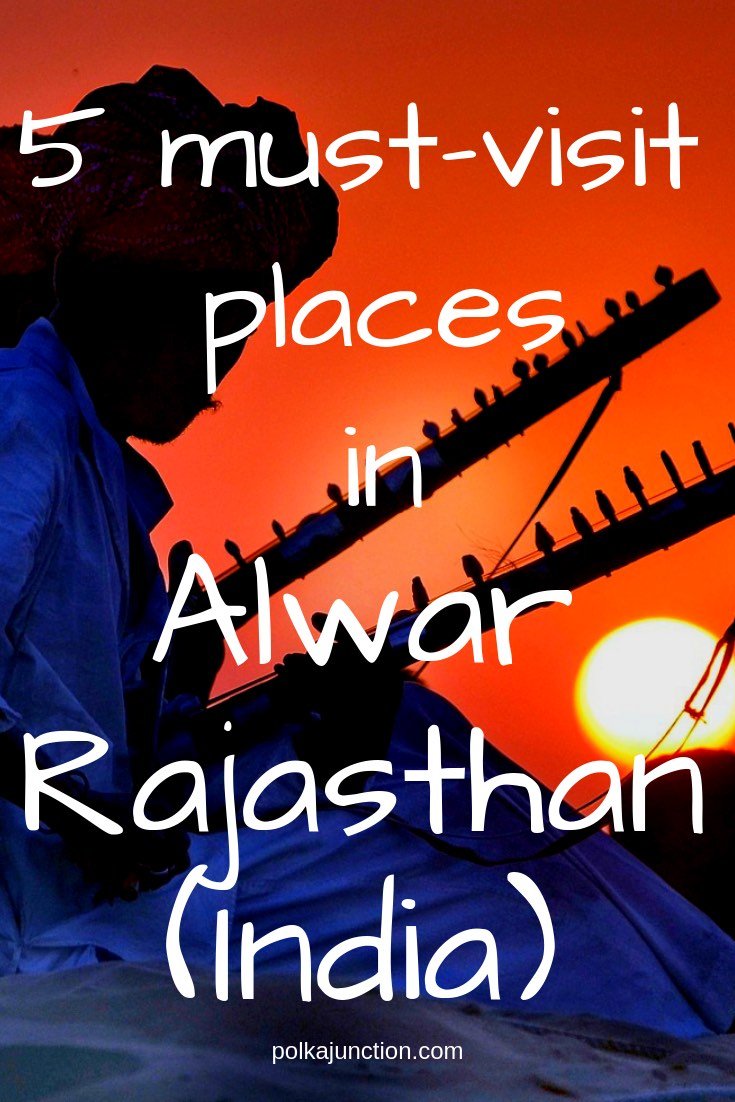 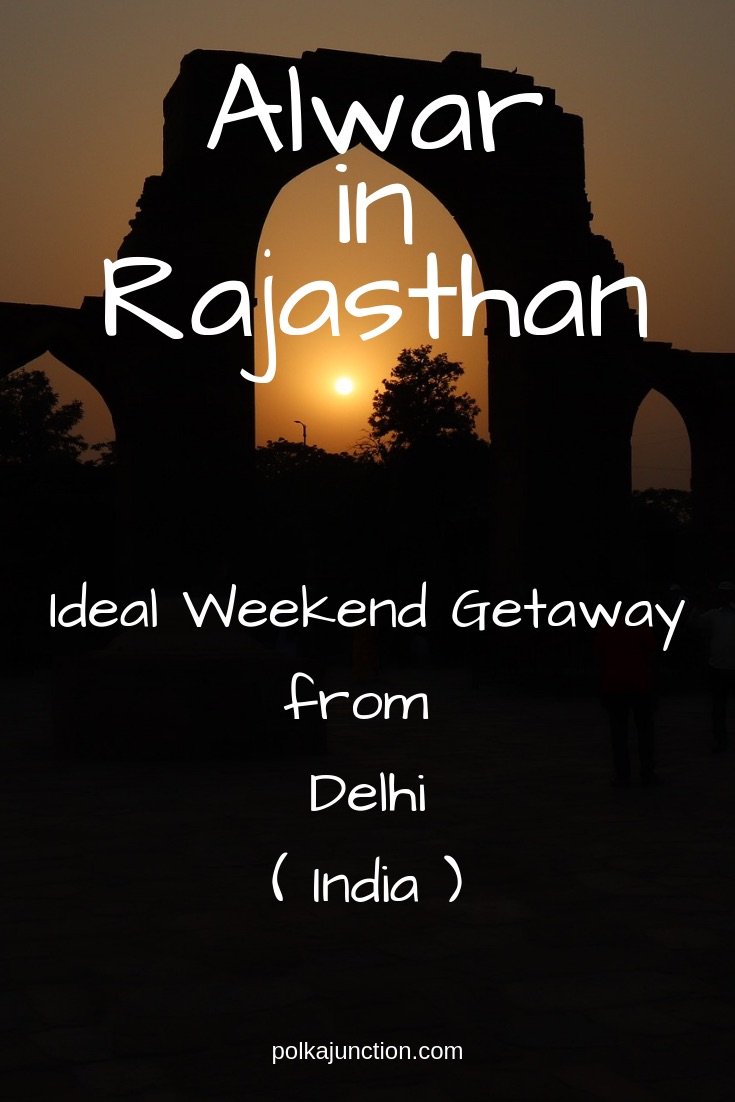 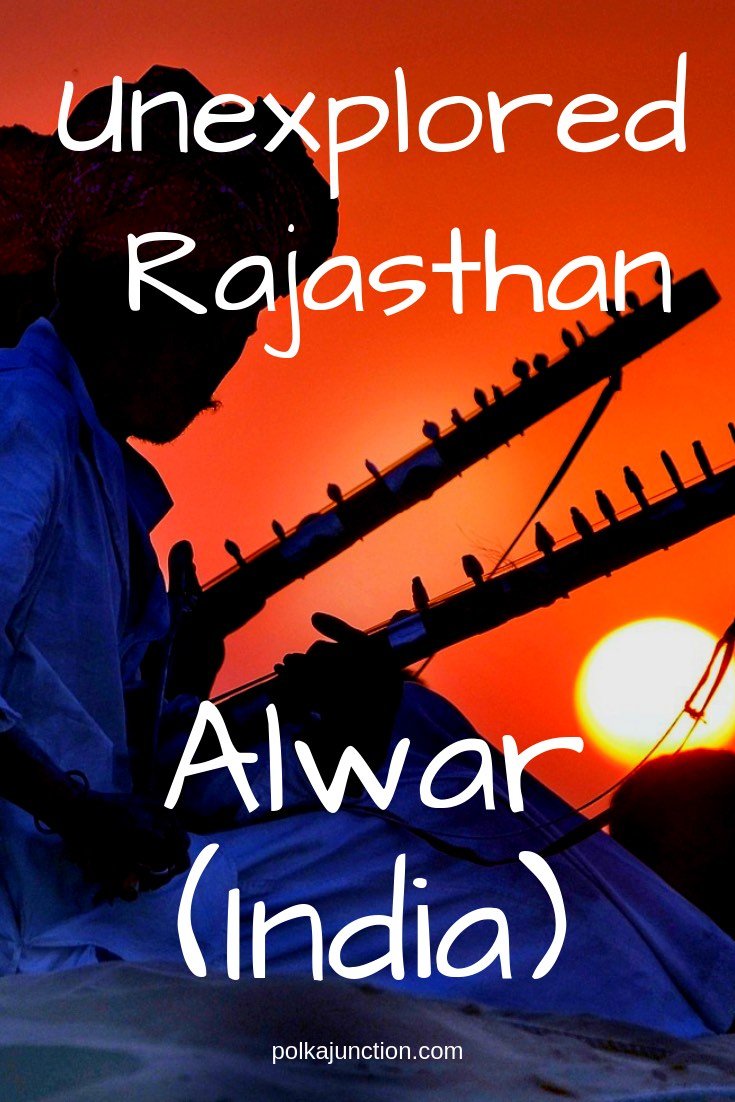 Join our community of readers , responsible travellers and foodies

The Fascinating Case of Bottled Critters in Laos-Snake Wine

Know about the curator

Hi
I am Meenakshi and the curator behind PolkaJunction.

I cover cultural and travel stories through architecture, arts, UNESCO heritage, vegetarian food, traditions, and lifestyle, intertwining with some soft adventure and social responsibility. I also love documenting people who are passionate about handicrafts and collect heirlooms.

All our trips were undertaken before March 2020. Since the on-set of the COVID pandemic we haven't travelled, and neither are we intending to travel for the next couple of months until the pandemic subsides. We request you all to adhere to the guidelines issued by the World Health Organization and plan your travels accordingly. Stay home, stay healthy , wear mask and take care.